Welcome back to Disney Extinct Attractions. My name is Cole, and I’ll be your tour guide as we zip around Tomorrowland.

This past week, I had the great pleasure of visiting Walt Disney World. Every time I visit, I always make sure to take in some of my favorite attractions that have left Disneyland like the Country Bear Jamboree, Carousel of Progress, and most importantly, the PeopleMover. (This time that included riding it seven times my final day there.) Last week, I had the great joy to tell you all about Disneyland’s PeopleMover, so I thought that it would only be fitting if this week we followed up by looking at Disneyland’s ill-fated replacement, the Rocket Rods.

Because of its very nature, Tomorrowland is constantly in need of a facelift to keep up with what is coming next in society. So in 1998, Disneyland’s Tomorrowland underwent its second major refurbishment to try and meet the needs of the newest generation. The New Tomorrowland project was headed by Imagineer Tony Baxter and was originally intended to be replaced with more space-themed attractions (ExtraTERRORestrial Alien Encounter for one), but that idea was scrapped when Disneyland Paris failed financially, so Disney needed to find new funding. 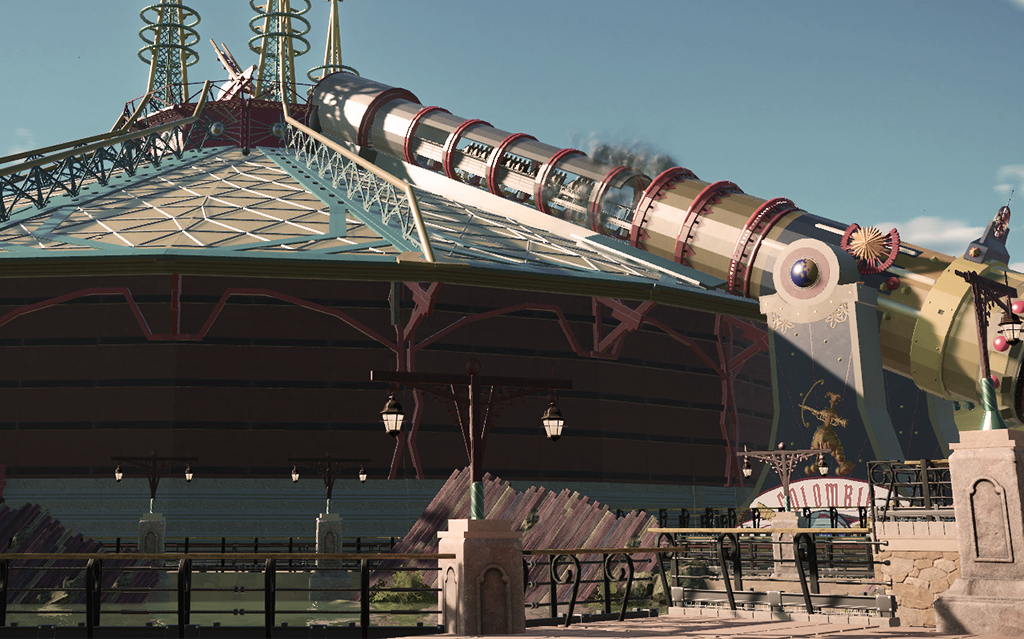 However, Tomorrowland’s redesign ended up resembling Disneyland Paris’s version of Tomorrowland, Discoveryland, an area inspired by Jules Verne’s ideas for the future. Restructuring Tomorrowland in this way allowed the land to stay roughly the same over time because Verne’s ideas were not likely to change anytime soon. Still, it’s very intriguing that Disneyland changed their land to look more like the park that failed.

Finally, New Tomorrowland 2.0 opened in 1998, and guests got their first look at the land and especially at the major attraction that was supposed to anchor the land, the Rocket Rods. 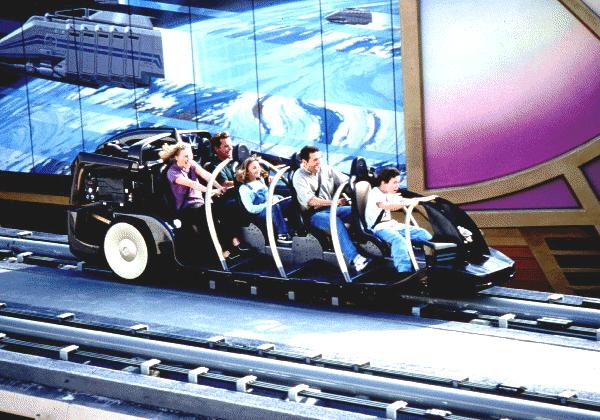 The Rocket Rods opened on May 25th, 1998 as the headlining attraction of Tomorrowland 1998, heralded as a new way to tour Tomorrowland, albeit a very quick tour because the Rods reached speeds of over 30 miles per hour. The attraction opened as an E-Ticket attraction because it created an unique experience, where guests could experience a new form of mass transit in an open air setting while traveling at breakneck speeds.

The queue of the attraction established the Rocket Rods’ theme of transportation, helping to create more of a connection between the attraction and its predecessor, the PeopleMover. Whereas the PeopleMover was a leisurely ride that could be used to move large amounts of people, the Rocket Rods served people who needed to get somewhere without delay. The different types of transit that each attraction used represented the changing nature of humanity because, in general, humans are continually trying to get places faster, with less and less regard for the journey and the sights one could see along the way. 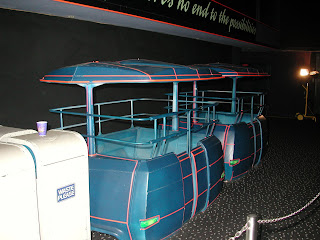 The Rocket Rods furthered their tribute to the PeopleMover through the inclusion of a couple of the former vehicles inside of the queue. Included in the first room of the line were also some of the Rocket Jets vehicles, a Space Mountain car, and even the front of a Monorail. The beginning of the queue really excited guests because it furthered the theme of transportation, as all of the attractions that these vehicles came from dealt with transportation (even very loosely like the Rocket Jets, but still space ships).

After successfully whetting guests appetites, the queue went one step further by actually using a former attraction as part of the line. 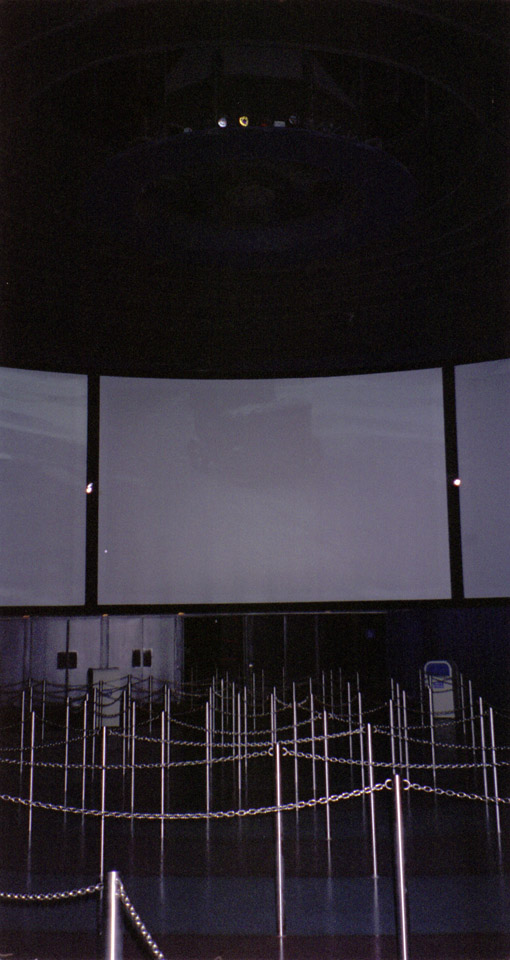 Within the second part of the queue, waiting guests got to experience an abbreviated Circle-Vision 360 theater experience that highlighted how important transportation was to the world, and especially to Walt Disney (who is featured briefly at the beginning of the show). I think it was a really clever idea by the Imagineers to take a less popular experience and incorporate it into a new attraction that they expected to be extremely successful. Plus, it helped keep guests entertained in a line that was always incredibly long.

The queue also did a great job of setting up the idea of the Rocket Rods as a future type of transportation. As you can see in the picture below, the attraction would have “future” destinations all around the surrounding Anaheim area, adding to the credibility of Rocket Rods actually being used to transport people one day. 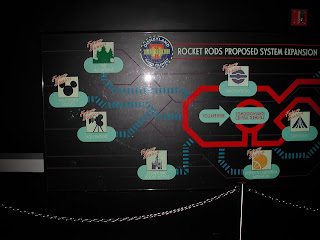 With the queue almost an attraction itself, guests naturally flocked to the Rocket Rods. The ride had so many things going for it: a great theme, an immersive queue, and high demand from guests. So what could possibly go wrong?

It didn’t work. When an attraction breaks down at least once daily, generally it needs a LOT of fixing, and that was certainly the case for the Rocket Rods. (Though Indiana Jones has been surviving for years, and it breaks down at least daily.) Having to create the track for the attraction around the PeopleMover’s previous track created problems from the onset. The structure simply could not support the strain that the high speeds of the Rocket Rods put on it. The attraction also could not retain its speed when making turns or its wheels would actually come off the track. Eventually on September 25th, 2000, the Rocket Rods closed to undergo a major refurbishment to try and cure some of those problems. 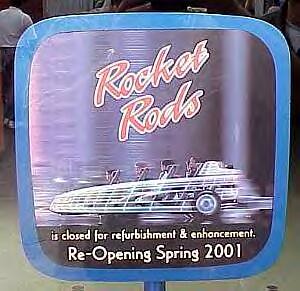 Unfortunately, the Rods never got a chance to rocket again and the official closure of the attraction was announced on April 28th, 2001, a sad end to a attraction that started out so fast.

Overall, I think the queue for the attraction was extremely interesting, really helping to tell the story of the Rocket Rods, as well as creating a great tribute to what came before it. However, the actual ride experience was extremely jerky from what I could tell from the video seen below. One cool thing about the video is that it actually includes the queue in it, so hopefully you can enjoy this video that I’ve heard is more fun than the attraction actually was.

Alas, we now come to the time where I have to bid you adieu and ride off into the sunset on my Rocket Rod. But not without some clues as to next week’s attractions.

I hope you enjoyed reliving one of the most maligned attractions to have ever hit the Disney Parks because I know I certainly did.