Welcome to Extinct Attractions. This week we’ll be going on a wet and wild tour of the Animal Kingdom. Last week, Disney announced that there would be nearly a week of celebrations at Animal Kingdom for Earth Day. The theme park has been tied to April 22 and Earth Day ever since it opened on that day in 1998, and it’s awesome that they still celebrate it every year. So much of the park is built on the foundation of conservation and environmentalism that it is such a perfect group of festivities. Plus, Earth Day does not get a lot of attention, so it is pretty cool that it actually gets theme park recognition.

But before we get too deep into Animal Kingdom in the present, let’s go back to opening day, April 22, 1998 and look at the only opening day ride that no longer exists in the park today. When Discover River Boats opened, guests were misinformed about the attraction, thinking that it was the Animal Kingdom’s version of the Jungle Cruise. There was a skipper who would drive the boat around and crack a couple of jokes, but her or his job was primarily to guide the boat and provide some information about the park.

The best way to think about the boats was as Animal Kingdom’s version of the railroad. Along the way, there were a few cool effects and animatronics to see, but at its core, it was designed to transport guests from one area of the park to another. However, guests didn’t really catch this memo as the waits quickly became over an hour to ride this, admittedly, not particularly thrilling attraction.

I never got the chance to experience the attraction myself, but I did really enjoy my time watching the video of it that was filmed during a preview of the park from March of 1998. The banter between the people on the boat and the skipper was really interesting because no one on the boat quite knew what to expect from the park, so it was an interesting history lesson to hear what they were saying about the park at that time. The highlight of the interaction, though, was when someone asked “Is The Tree of Life real?” and the skipper without hesitation responded, “Yup.” The questioner completely bought it, and it’s just one of the funniest interactions I’ve ever heard at a Disney Park. As I mentioned earlier, there were some effects along the way, with the first being a trip by a fire-breathing dragon’s cave. Though the cave was simply a rock with a fire cannon in it, it was a clever way to tease Beastly Kingdom, the proposed mythical creature land that never quite made its way into existence.

After the cave, guests passing Africa saw some geysers erupt, with a slight chance to get damp if it was a particularly windy day. These geysers actually continued to have some life after the attraction closed with guests walking from Camp Mickey-Minnie to Africa occasionally seeing the geysers go off. 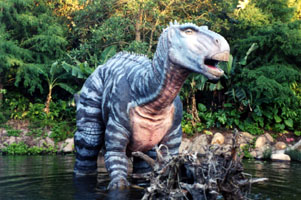 The most impressive thing that guests got to see was an animatronic iguanodon near Dinoland USA. The animatronic was a perfect way to entice guests to ride Countdown to Extinction once they got off the river boats, and with all the animatronic dinosaurs being in the dark on that attraction, it was particularly cool to see a moving dinosaur in the daylight.

As a whole, I really liked the Discovery River Boats for what they were. I so wish that I had the chance to just float along Discovery River and see the park from a whole new vantage point. It just seemed like such a pleasant journey and as a huge PeopleMover fan, it gave me those vibes. 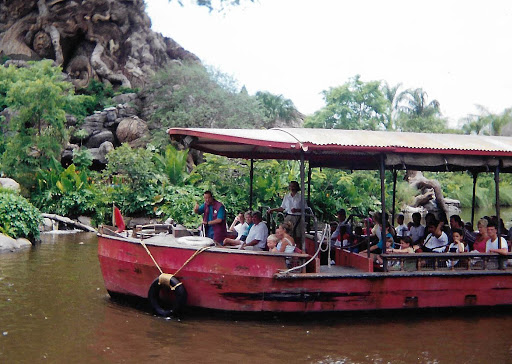 Eventually, Disney got tired of people not understanding the purpose of the attraction and renamed it the Discovery River Taxi in November 1998. They hoped that the rename would help curb some of the crowds by really focusing the attention on its service of transporting guests across the park. Along with the rename, they unfortunately also took away some of the fun by removing the iguanodon and stripping the skipper’s speaking role, instead relying on a pre-recorded narrator. They did add a little something, bringing in small animals to the boat for people to look at along the way, but in my opinion, the lack of iguanodon was reason enough to consider the attraction downgraded.

Guests agreed almost too wholeheartedly, with the wait times reducing significantly as time went on. I would guess that a lot of this effect had to do with people being disappointed after their first time, so word of mouth spread that it wasn’t a great attraction, or underwhelming at the very least.

To help combat the lack of guests, Disney rebranded the attraction again to the Radio Disney River Cruise. The only major change that they made was changing the narrator to Radio Disney hosts. I’ve got to admit, I’m a bit confused about Radio Disney’s part in the attraction because it doesn’t exactly seem to scream Animal Kingdom. Sadly, it was all for naught as the attraction only lasted another five months before closing on August 21, 1999, not even making it a full year and a half. The worst part is that pretty much nothing has replaced it to this day, with nearly all of the boats reportedly just sitting in storage backstage. A few of the boats were repurposed for the waterways around Magic Kingdom, but for the most part everything has simply sat dormant. Today, Rivers of Light: We Are One can be seen in the large lake part of the river, but everything else sits empty waiting for life.

Well, that brings today’s journey to a close, so here’s a glance at what’s coming soon. Via Funny or Die