Welcome to Extinct Attractions and happy holidays! It’s Christmas Eve, so today we are getting in the spirit with a look at one of Disneyland’s former Christmas parades.

Disneyland goes all out for the Christmas season, and this year is no exception. Even though Disneyland is closed, Buena Vista Street across the way was decked out in Christmas garb and Downtown Disney got in the spirit some as well, so Christmas cheer is still in the air at the Disneyland Resort. With vaccine distribution at full steam now, this seems likely to be the only holiday season with the park closed, which will make next year’s all the more magical.

One of my favorite elements of Disney at Christmas is the Christmas Fantasy Parade. Every year, my family and I gather to watch it together, keeping memories alive while making many more. As I was thinking about it this year, I realized that that was the only Disneyland Christmas parade that I had ever known because its predecessor ended before I was born, so today we’ll be jumping back to the 70s, 80s and 90s to experience The Very Merry Christmas Parade. 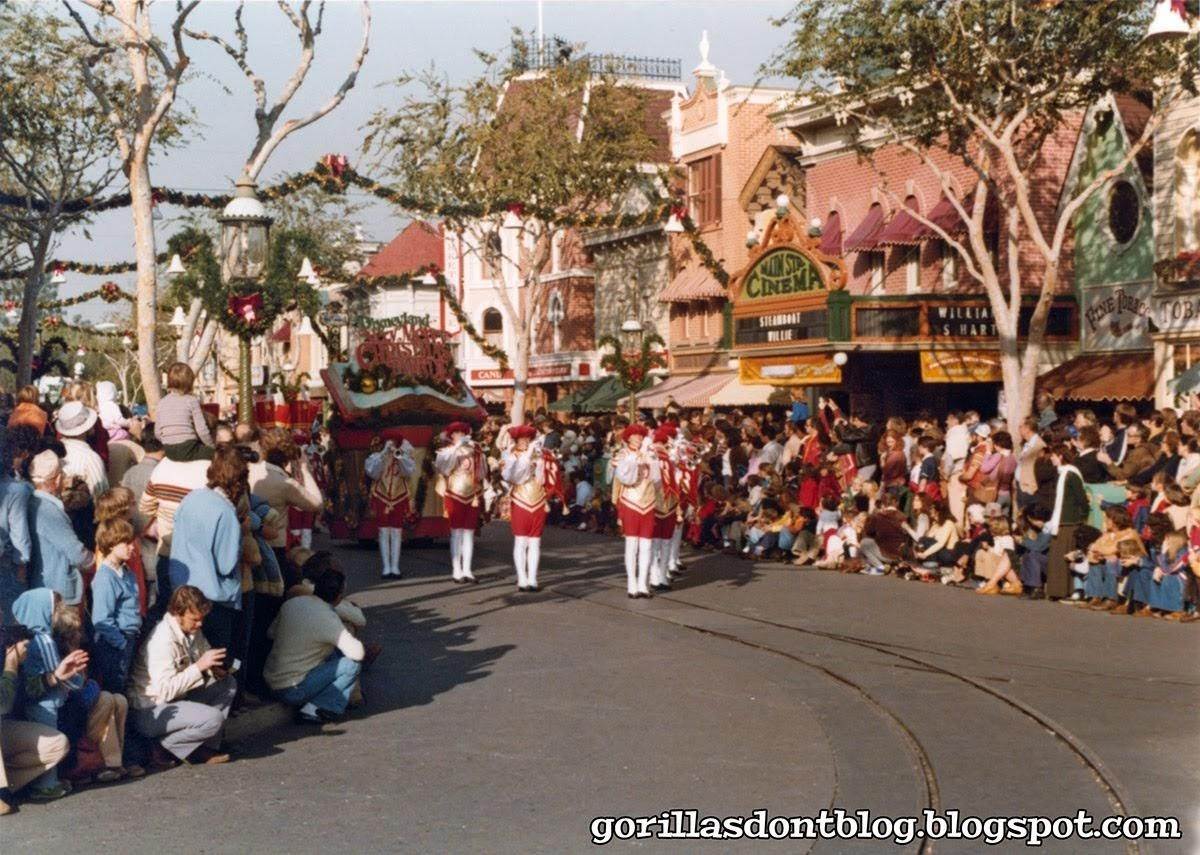 The Very Merry Christmas Parade wasn’t Disneyland’s first Christmas parade (in fact, it was its third), but it was one of its longer running Christmas parades, especially if you count the years it was not in the park. To start out, the parade first debuted in 1977 as Disneyland’s first Christmas parade on record since 1964. There were probably some other celebrations during that time, but I couldn’t find anything in my research. That first run did not last very long, ending in 1979 and leading to a hiatus of the parade where there again wasn’t any Christmas parade that I could find. This gap I find a bit more believable because the Disney company was not doing so well at the time, so cutting entertainment like seasonal parades was an easy move. By 1987, Disneyland missed having a Christmas parade, so they brought the parade back, though I’m sure it had some changes to it to reflect the changes over the years. Unfortunately, there is not much literature about this attraction, so much of what I’m writing today is pieced together as best as possible with conjecture noted throughout. But anyway, the parade definitely made changes throughout the years as you’ll see by some of the properties represented throughout.

The Very Merry Christmas Parade basically bookended IP in the middle with Christmas characters at the beginning and end of the parade (many of which will look very familiar to Christmas Fantasy fans). The start of the parade sees a large band playing as well as a large assortment of knights, who felt very regal in their manor. At first, this had me a bit confused until Sleeping Beauty and Snow White showed up, both with very fun floats.

Aurora’s float itself was elegant, but the real highlight was that Maleficent herself was on it. She’s my favorite Disney villain (and also my Disney+ icon since Day 1), so getting to see her appear in a play was pretty thrilling. On the other hand, the Snow White float went for a more rustic feel with the dwarfs’ cottage serving as the float, but I loved that idea as well.

Following the princesses, we got into some animal content with Jungle Book characters appearing next including, what will become a recurring theme, an actual kid playing Mowgli. To pair with the characters, there was a trombone posse following them which added a lot of liveliness and led nicely into the next group of animals from Fantasia. Characters from that film really don’t get a lot of parks attention (outside of Sorcerer Mickey and some Yensid and Chernabog), so it was pretty cool to see some of the less-heralded characters come to life. 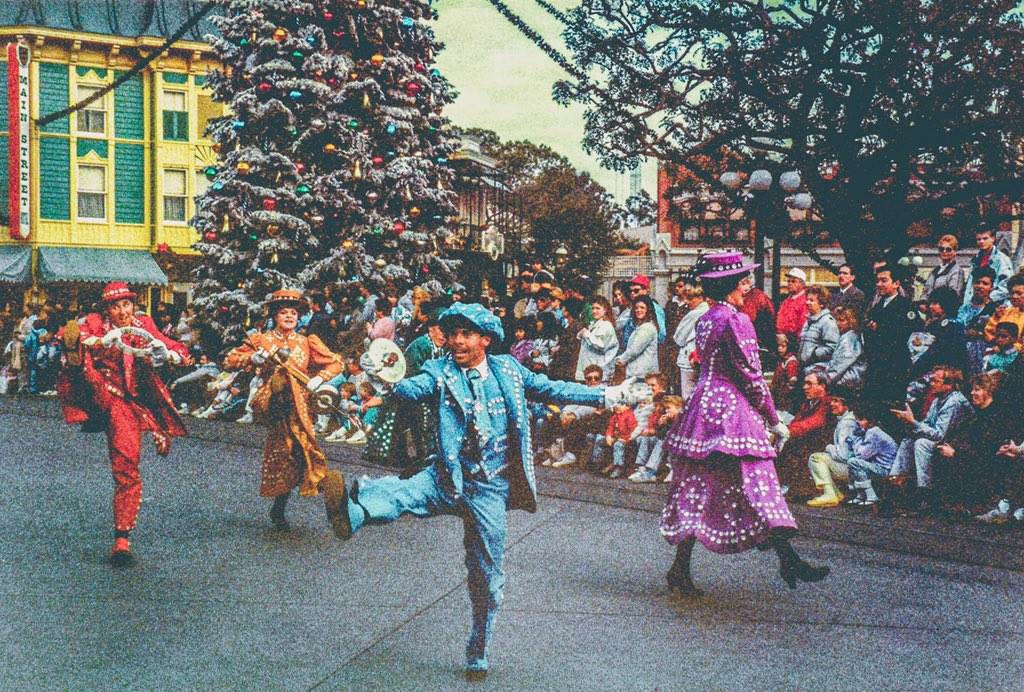 The show’s director kept the theme of IP from the Walt days by moving onto Mary Poppins next. We are used to having Mary around in Mickey's Soundsational Parade, but outside of that she doesn’t get to feature in parks attraction very often, so it was nice seeing her, too. Of course, she had Jane and Michael with her, both of whom were also played by kids, as were all the Lost Boys in the next group to roll through from Peter Pan.

As a whole, I counted at least 10 children in this show, which was pretty crazy to see through today’s lens. Disney hasn’t hired children to play any roles in their roles in nearly twenty years, with Steps in Time being the last example I can think of. Steps in Time, I understood because it was a full stage show, but getting kids for a parade is crazy to me, though this performance was at night, as it performed in day and night, so at least they could go to school.

As a whole, the Peter Pan floats were my favorites of the attraction with Captain Hook making a rare face character appearance as he and Smee tried to escape the croc. We also got to see Skull Rock and Peter Pan fighting some pirates atop the Jolly Roger, so overall it was just a really fun sequence that felt reminiscent of both Fantasmic and Main Street Electrical Parade. 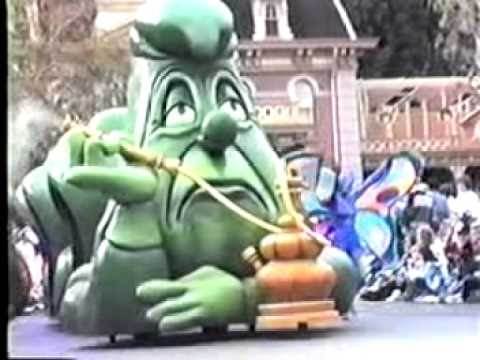 Next up in the parade were Alice and her chums, with the best part being the insanely long Caterpillar float out of which butterflies would emerge. If you know me, you know my favorite Disney character is the Caterpillar, so I may have audibly gasped as I saw him in all of his splendor. What also stuck out during the Alice portion were how many performers were in this parade. It had to have been over one hundred in total, especially with so many floats involved.

After Alice was done, it was time for the Beauty and the Beast float. At this point I was pretty much floating on air because my two favorite Disney Animation films had appeared back to back, and the splendid nature of both of the floats made it even more exciting. On the Beauty float, they had an animatronic Lumiere that reminded me a lot of the one in Enchanted Tales with Belle in Magic Kingdom, and I was impressed with how much money they were willing to put into a seasonal parade. Plus, the fact that they were adding in new floats when new films came out shows that they were committed to making it as successful as possible. 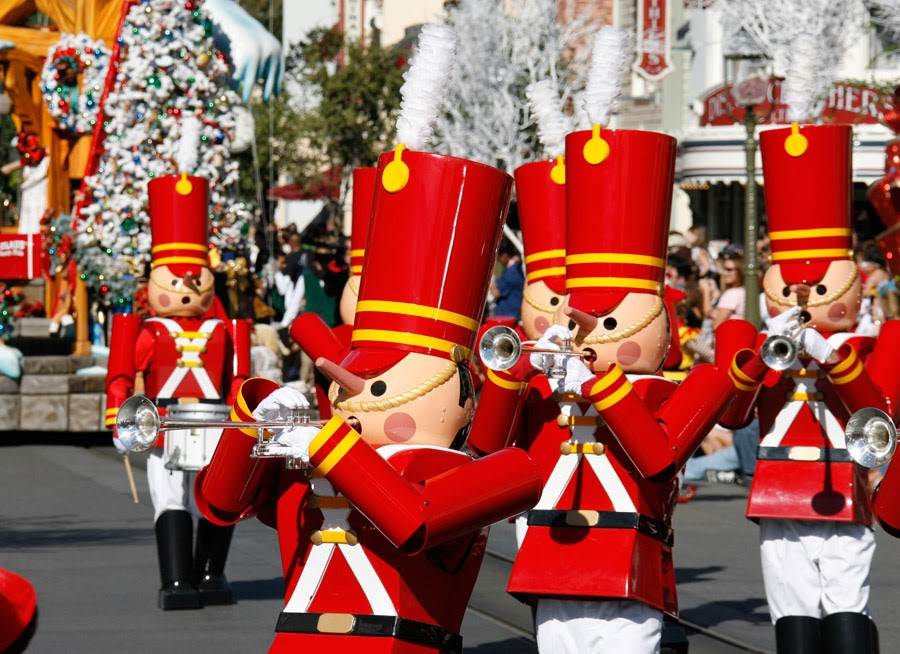 With most of the specifically IP-driven floats out of the way, much of the Christmas material that we know and love started to make their appearances. We started off with the toy soldiers from Babes in Toyland, who had actually made their first appearance in parades before Very Merry. The musically-inclined troops are one of the most iconic parts of the show, and honestly, they just make me happy every time that they show up.

After that, we got to see Geppetto’s toy shop with a myriad of characters like Roger Rabbit and Pooh & Friends hanging out there. These floats looked a bit different than they do in Christmas Fantasy, but they still evoked that same feeling of happiness and giving that makes it special. Following up the toy group, pretty much the rest of the parade was used in Christmas Fantasy, albeit with some slight changes. To start, Goofy is still building a gigantic gingerbread house, but instead of being assisted by Max, Donald was his helper, which makes a lot of sense since A Goofy Movie hadn’t even come out when this parade ended.

After Goof, we got the snowmen and ice skating Mickey and Minnie, both of which continued their fun in the next version as did the closer of the show (who else?) Santa!

All in all, I really loved that so much of this parade has managed to stand the test of time and can still be seen today. Sure, it can run a little long, but I think it’s definitely worth it because few things put me in the Christmas mood more than a Disney Christmas parade. In 1994, The Very Merry Christmas Parade ended, becoming the Christmas Fantasy Parade the next year, and while I wish I could have seen it in person, so much of it stuck around that I can’t really complain.

Well, that’s all for today, but hopefully this article could help you get in the holiday spirit as we celebrate in the safest ways that we can. 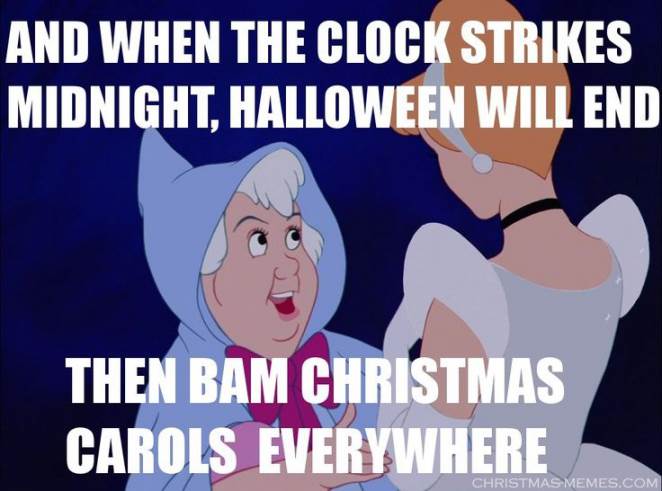 Thanks for reading and have a magical holidays!