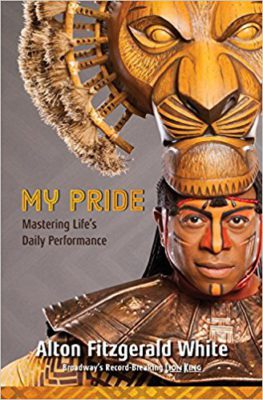 It seems that The Lion King is everywhere you look right now. The animated classic was rereleased as part of the Walt Disney Signature Collection, John Favreau’s live action remake recently made some fabulous casting announcements, and the hit Broadway show celebrated its 20th anniversary on Broadway this week with a free show and a surprise performance by Elton John. Released just in time to celebrate the show’s glorious run comes My Pride: Mastering Life’s Daily Performance by Alton Fitzgerald White, Broadway’s longest running Mufasa!

The book begins with a recollection of the evening when Alton was celebrated at his 4,000th performance with the cast of The Lion King, a huge accomplishment. The way Disney Theatrical celebrates and supports its cast of performers becomes a highlight as Alton flashes back to his childhood and relives the hard work, dedication, and impossible dreaming that lead to that moment. While this is absolutely his real life, it contains many of the themes of the greatest Disney stories ever told.

Alton Fitzgerald White speaks his truth with such dignity and grace, starting with his very humble beginnings and leading to the king of Broadway. Whether you are a theater fan or performer is irrelevant, anyone can easily relate to or empathize with Alton’s upbringing and his self doubt about his most precious dreams. Brought to some extreme lows in his youth and with some inspiring teachers, he was able to stand out, shine, and change his situation for the better.

What’s so brilliant about My Pride is that it not only provides a fascinating memoir of a life worth reliving, but also enlightens readers to the often harsh realities of show business. For every up in Alton’s career, there’s an almost equal down that finds him repeatedly starting over. He is an inspiration to any reader in any profession for his ability to step back, assess the situation, and make a plan to change it. If there are two big takeaways from the book, it’s that you have to work hard to make your dreams come true and that sometimes you have to listen to your instincts.

While I wouldn’t go as far as to label My Pride as a self-help book, Alton ends each chapter with a “Food for Thought” series of questions that allow readers to step back and examine their own lives, drawing inspiration from his. If you have no point of reference for the question, he also invites you to think about how you would react if you had been in his shoes. I found it to be a very healing way to not only reflect on my own life and choices, but to also become more empathetic. One thing’s for sure, your eyes will be opened to what it takes to be a successful working actor on Broadway and beyond.

I’m a theater fan and had even pursued education in the arts before switching to a safer choice. However, I often found myself relating to Alton’s lessons through my business experience above any of my theater experiences. He has so much to teach you about professionalism, how to handle workplace jealousy, and how to manage your own career in such a way that you get what you really need while never burning bridges. It’s incredible how applicable this autobiography of a theater professional is for anybody in any field.

Reading My Pride: Mastering Life’s Daily Performance was a wonderful way to celebrate the 20th anniversary of the Broadway version of The Lion King. It also inspired me to seek out Alton Fitzgerald White’s album of Disney Broadway songs, Disney My Way, which is available on Apple Music and Amazon Unlimited. You will feel so connected to him after reading his story that you will feel a deep need to connect with him in other ways after finishing it. Whether it’s on the stage, screen, or music scene, there are still big things to come from Alton Fitzgerald White.