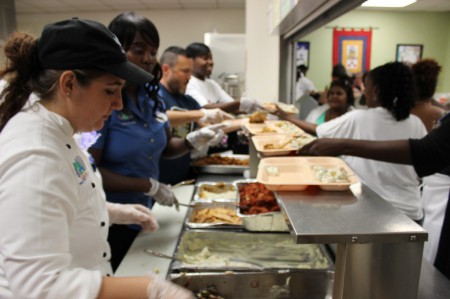 Chefs from Walt Disney World Resort whipped up some delicious meals and were among the first to pepper their culinary expertise with the residents of the new Men’s Service Center at the Coalition for the Homeless of Central Florida.

The Coalition for the Homeless of Central Florida is the largest provider of homeless services in Central Florida and the largest residential facility for children. The Coalition provides a broad range of services to help deal with the root causes of homelessness, including job training and educational programs to over 600 men, women and children. The new Men’s Service Center offers community meals every night and provides supportive services for up to 250 men.

With 100 pounds of meat malls, 1,000 dinner rolls, 300 pounds of tortellini, 1500 corn dogs, 200 pounds of bread pudding and 750 cupcakes, the Disney chefs prepared enough food to feed 1,000 people during their latest bi-weekly visit to the nonprofit.

Disney’s involvement was not limited to the kitchen. Earlier this summer, other representatives from Disney volunteered time to unload trailers full of furniture, move them into the building and assemble the unfinished pieces. In addition, Disney has supported the Coalition through Disney Grants. As a top recipient of the grants, the Coalition receives ongoing comprehensive support from Disney, through volunteer board service, assistance in the maintenance and improvement of Coalition facilities and through the donations of more than 18,000 meals annually and warm clothing in the winter.

“Walt Disney World has been a long-time supporter of the work and mission of Coalition for the Homeless,” said Brent A. Trotter, president and CEO of the Coalition for the Homeless.  “Because of their generous support of our children’s programs, the donations of in-kind goods and services, and the hundreds of VoluntEAR hours given by so many Disney Cast Members on countless projects, we are able to provide crucial services to those experiencing the crisis of homelessness.”

In addition to supporting the Coalition for the Homeless, Disney is actively involved in helping address homelessness in Central Florida by working with community programs and partnerships to reduce the number of homeless people in the community and prevent more people from being at risk