It turns out the edge of a galaxy far, far away is actually very close to Disneyland because merchandise previously only found on Batuu has now invaded the former Downtown Disney WonderGround Gallery. Residents of Star Wars: Galaxy’s Edge have seemingly hung their laundry out to dry above the former art shop’s sign, with yet-to-be-unpacked shipping crates outside declaring this to be the temporary new home of the “Star Wars Trading Post.” Come inside and have a look around!

The barren white art gallery walls feel a little sterile for the merchandise now on display, but Disney has tried to recreate some of the Galaxy’s Edge experience by grouping most of the items with other products from the shops on Batuu, such as the Creature Stall, Droid Depot, and Toydarian Toymaker.

Something that doesn’t stand out as much when taking in the bigger picture of the shop is the efforts Disney has made to fill in the space with themed clutter from Star Wars: Galaxy’s Edge. The overall shopping experience may not be able to recreate the esthetic, but in this temporary shop that exists purely to bridge the gap between now and the reopening of the parks of the Disneyland Resort, it’s better than nothing.

There’s even one new release (for Disneyland) that wasn’t available before the park’s closed, a Toydarian Toymaker plush version of The Child. Along with the other plush characters from the shop, this little guy who stole the hearts of every Disney+ subscriber in The Mandalorian can now be your new travel buddy. And good news for Yoda from this same collection, he’ll never be mistaken for “Baby Yoda” again.

If you can’t get to Merchant Row, Merchant Row can come to you! Here you’ll find some wearable items from Resistance Cargo, just in time for Halloween.

A few kowakian monkey-lizards stowed away with the cargo and are eagerly awaiting your visit to be rescued. 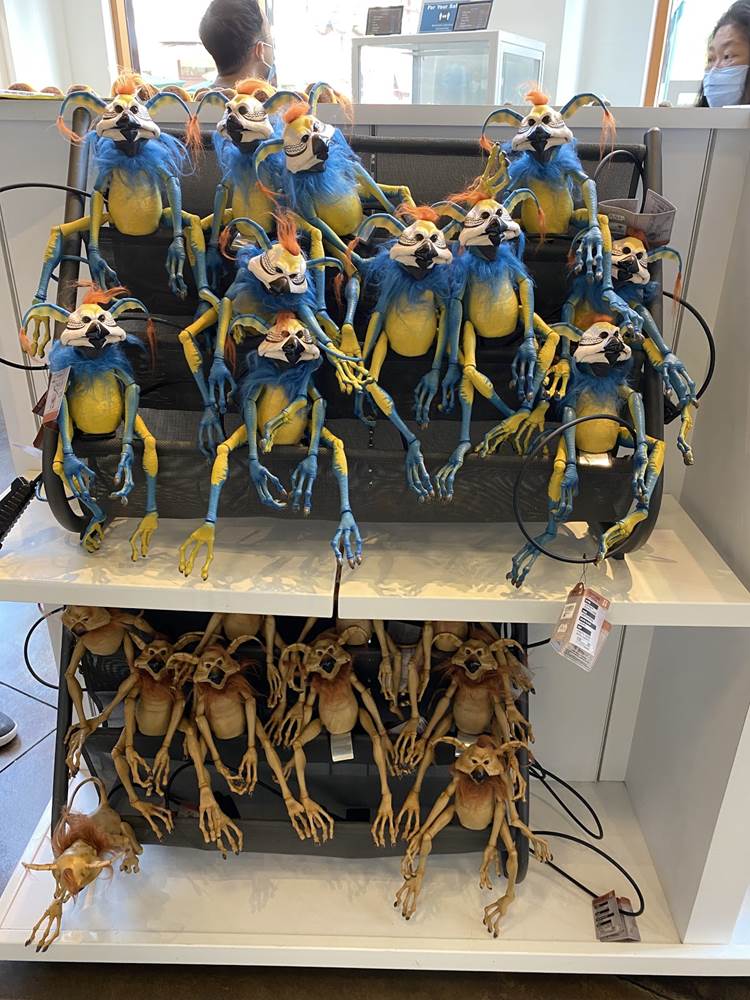 Don’t tell Dok-Ondar, but they’re also selling some rare finds from his Den of Antiquities, including Holocrons and Kyber Crystals.

Lightsabers aren’t just on display, they’re for sale. Savi’s Workshop isn’t there, but you can choose from the previously available Legacy Lightsabers and they also sell accessories, including belt clips and carrying sleeves.

You can’t build your own droid either, but you can pick up some premade astromechs from the Droid Depot, which are located dangerously close to items from First Order Cargo.

One thing you sadly won’t find here is the new Batuuan Spira gift card, which will hopefully be available when Disneyland reopens.

You can visit the Star Wars Trading Post on your next visit to Downtown Disney at the Disneyland Resort for a little taste of Star Wars: Galaxy’s Edge until it's safe to return to Batuu. Until then, may the force be with you.