The second season of Peyton’s Places is in full swing and it follows the NFL great around the country as he explores the history of the National Football League, one piece at a time. The fifth episode features one of the greatest wide receivers and must-watch players of all-time: Terrell Owens. The episode opens with Peyton introducing his daughter Mosley to Owens so she can teach him some new dance moves. Peyton admits that he can’t dance himself so he had to bring in the best dancer in his family to hand with Owens, who made a habit out of dancing on the football field.

After dancing a bit, Peyton and T.O. sit down to talk football. Owens points out that Peyton forgot his popcorn before setting up for the interview. That leads to Peyton pointing out the incredible shape Owens is in, even long after his playing days. Peyton points out that many people know Owens as the guy doing situps in his driveway during an interview while he was in a contract dispute. Many fans think of Owens as a selfish, lockerroom problem but Manning disputes that.

They then get into a bit about how to pronounce his first name and what Owens prefers to be called. We get to see an old interview with then-Eagles coach Andy Reid pronouncing his star receiver’s name incorrectly (by the way, it’s Terrell, not Terrell).

Owens talks about his upbringing in Alabama, explaining that his grandmother raised him with very strict rules and didn’t even want him playing sports. Owens continues to explain that he wanted to be a dancer growing up and he idolized Michael Jackson. He even won a dance contest as a kid.

Owens admits to being clueless in regards to football as he was entering college. He explains that he thought he was going to the University of Tennessee in Knoxville when in reality he was attending The University of Tennessee at Chattanooga. That may seem trivial to most, but to college football fans, it’s a huge difference. He also admits he never thought he would play football beyond the collegiate level, explaining that he didn’t even start at Chattanooga.

They jump ahead a bit, into Owens’ third year in the league and a played referred to as “The Catch 2” during a playoff game between his 49ers and the Green Bay Packers. We see a series of Owens’ “highlights” from the game, as they talk about how it was one of his worst games he ever played. Eventually, they get to the play in question and football fans have to love Owens breaking down the film and showing exactly how the catch was made. 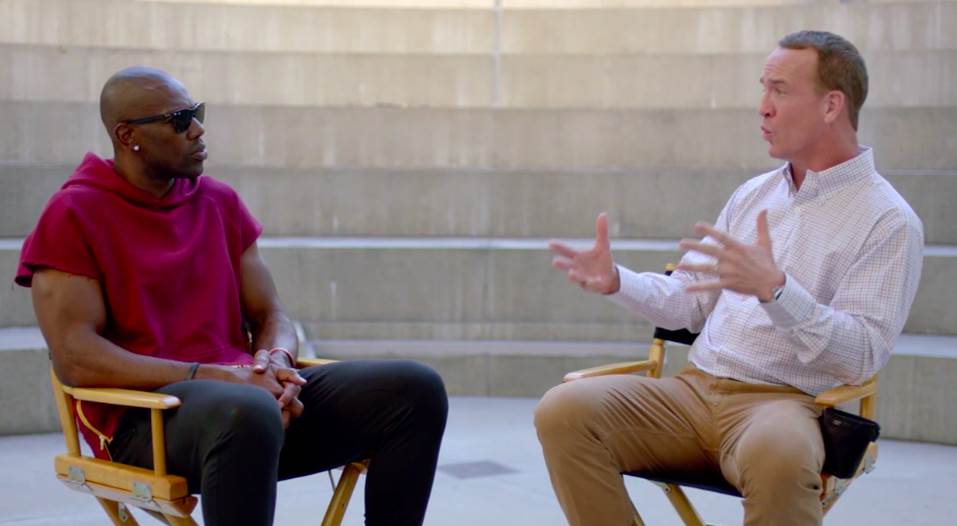 Peyton talks a bit about how Owens eventually surpassed Jerry Rice, the unquestionable greatest wider receiver of all-time, as the 49ers’ top receiver. That leads to a highlight package of Owens securing 20 catches in one game on “Jerry Rice Day.” Owens points to a moment in which the two receivers shared and embrace as a symbolic passing of the torch.

Next, Peyton and his guest get into some of Owens’ most memorable sayings. Peyton refers to the receiver was a wordsmith as we see clips of Owens on the sideline screaming into the camera “I love me some me.” Owens claims he was a shy kid growing up and needed to find a way to build his self-esteem. That leads to the topic of celebrations, including the famous sharpie celebration. We get to relive maybe the most iconic T.O. moment as he broke out a sharpie after scoring a touchdown and signed the ball in the endzone.

They then get into the misperception of T.O. as a selfish player and a problem in the lockerroom. Owens compares his football gear to a superhero costume and his experience to a Marvel comic. Owens likens his transformation to Peter Parker becoming Spider-Man and he must have been a fan of The Incredible Hulk television series because he refers to the Hulk as David Banner. Trying to add to the conversation, Peyton really drops the ball by bringing up Aquaman as another example. Come on Peyton, synergy is supposed to be one of your strong suits.

They later get into Owens’ performance in Super Bowl XXXIX, just seven weeks after breaking his leg. They point to this game as evidence that Owens was not a selfish player, but rather someone who put the team first and did whatever he could to help the team win.

Then, just to be a little contradictory, they get back to the topic of celebrations. Peyton points out that Owens was fined $150k for celebrations in his career. Peyton asks him how he feels about the fact that the league encourages celebrations now while he was so often punished for it. He explains that he was just having fun and wasn’t trying to be a trend-setter. He also says he doesn’t think anyone would know who T.O. was if he wasn’t having so much fun. Seems like football fans would still remember the guy who is third all-time in both receiving yards and touchdowns whether or not he signed a football on the field, but I do see his point.

Peyton’s Places is consistently entertaining and informative. This episode does jump around a bit more than most in terms of its storytelling, but it’s still easy to follow the conversation between these two all-time greats. This show gives a nice mix of older legends and recent stars so you get something a little different every week. You’re obviously going to get a different episode on a week-to-week basis when you go from Fran Tarkenton to Terrell Owens. But even with each episode being so different, they always manage to be fun in their own unique way.