ESPN and Marvel Entertainment have teamed up for the NFL Draft this year, creating custom comic book covers that depict seven NFL Draft prospects with Trevor Lawrence’s cover being revealed on Thursday, April 29. 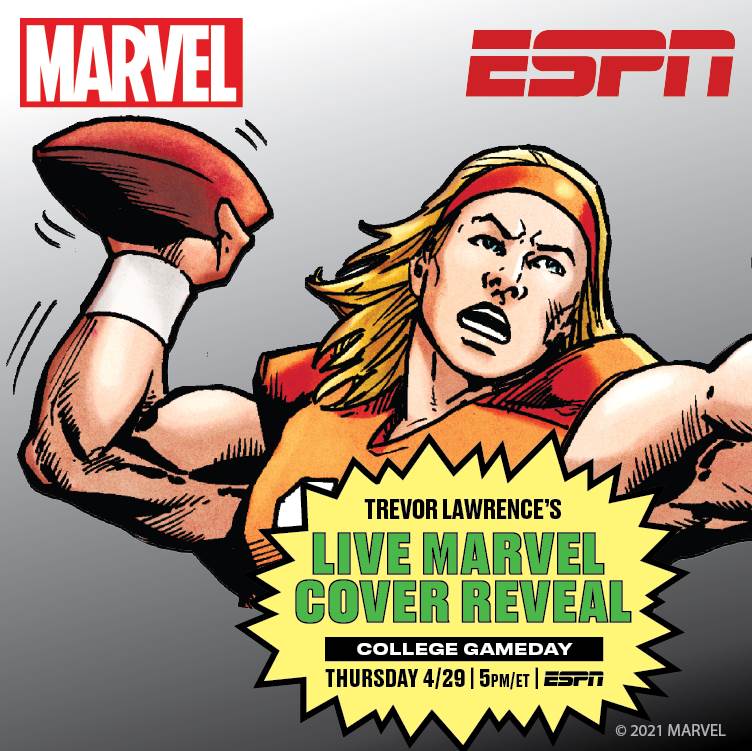 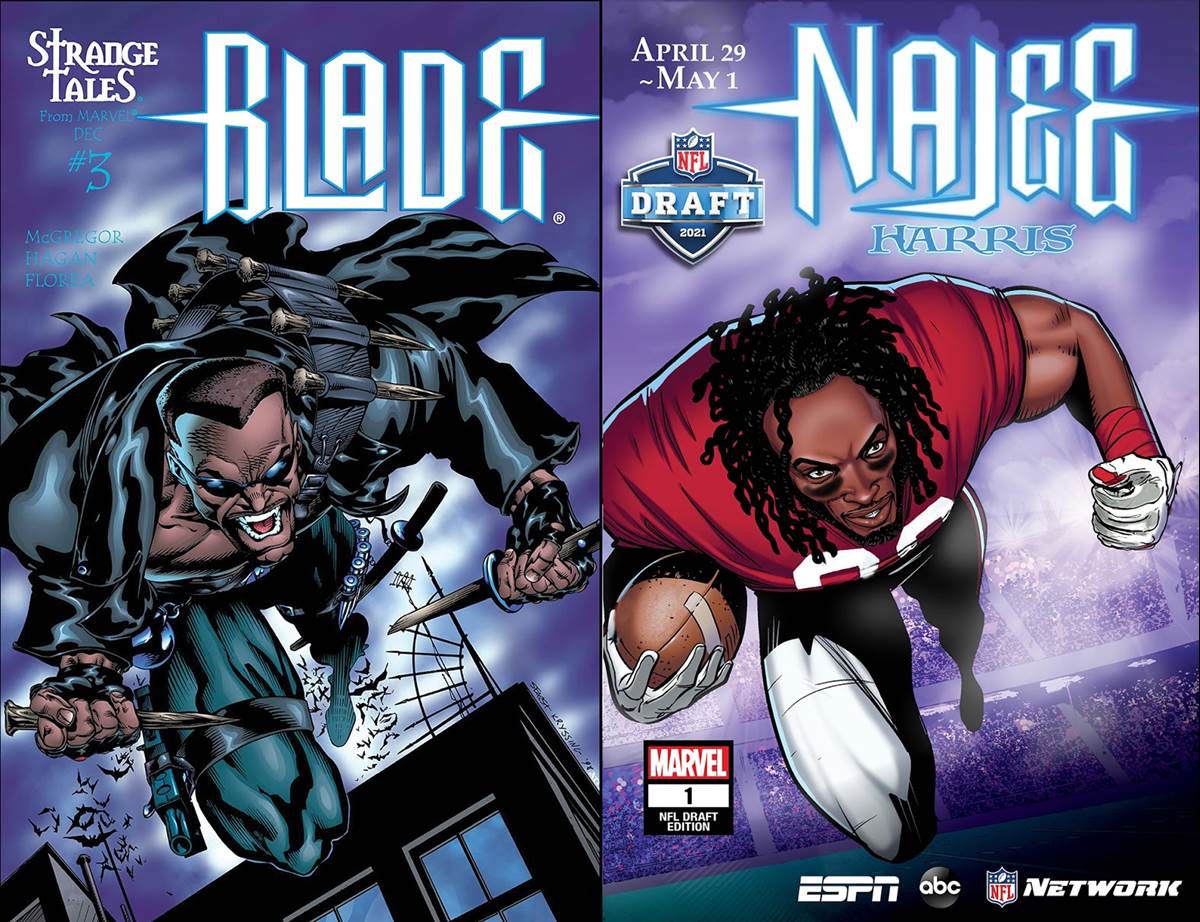 “Najee Harris (Alabama), an elite running back with a rare combination of power, quickness and speed, is ruthlessly efficient on the football field. Whether he is running over defenders, zooming past them or cutting his way through NFL defenses, he is a force to be reckoned with… much like the Marvel’s “Day Walker,” BLADE, who uses his own brand of power, speed and super human abilities to battle the evil forces of the night. Credit: Ray Anthony Height (artist), Wil Quintana (colorist); Strange Tales: Blade #3, after Bart Sears.” “Azeez Ojulari (Georgia) is a dominant edge rusher from the University of Georgia. Known for his explosiveness and effective use of his hands, Ojulari is agile and quick in pursuit but also has great balance and can be difficult to move. An all-around weapon for the defense, he excels at making like difficult for the opposing quarterback. Marvel’s own “weapon” is also familiar with work off the edge. Wolverine shares many traits with Ojulari… tenacity, effective use of his hands and super human toughness as he fights alongside his fellow X-Men.

This cover homage to Wolverine #305 was a great fit for the Georgia Bulldogs star as he waits to see where he will begin his NFL career. Credit: Sean Chen (artist), Darren Sanchez (colorist); Wolverine #305, after Jason Keith & Jim Cheung.” 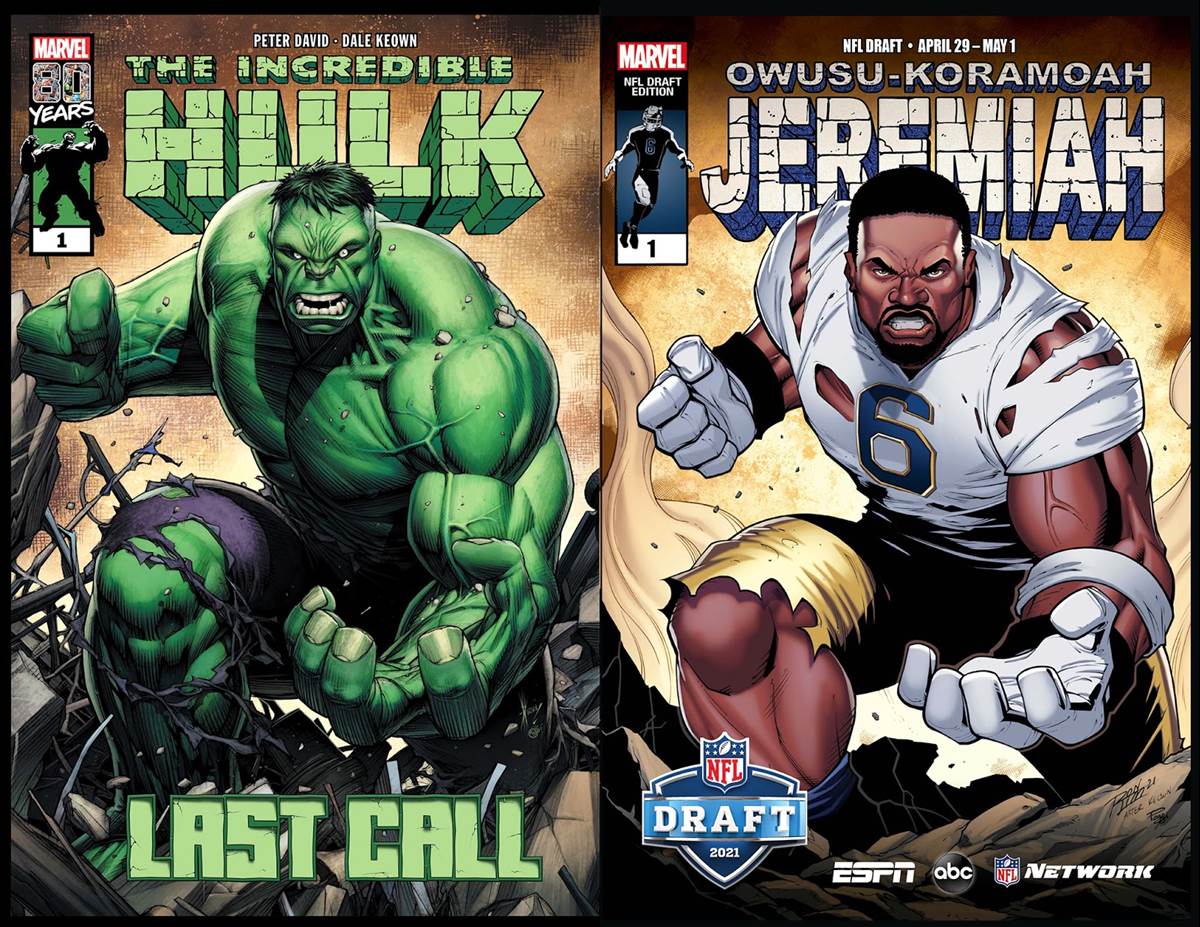 “Jeremiah Owusu-Koramoah (Notre Dame) is a versatile linebacker with a rare mix of athleticism, explosiveness, speed and agility making him a force on the football field and a relentless defender and pass rusher… also making him a good match for Marvel’s own relentless force, the Incredible Hulk. 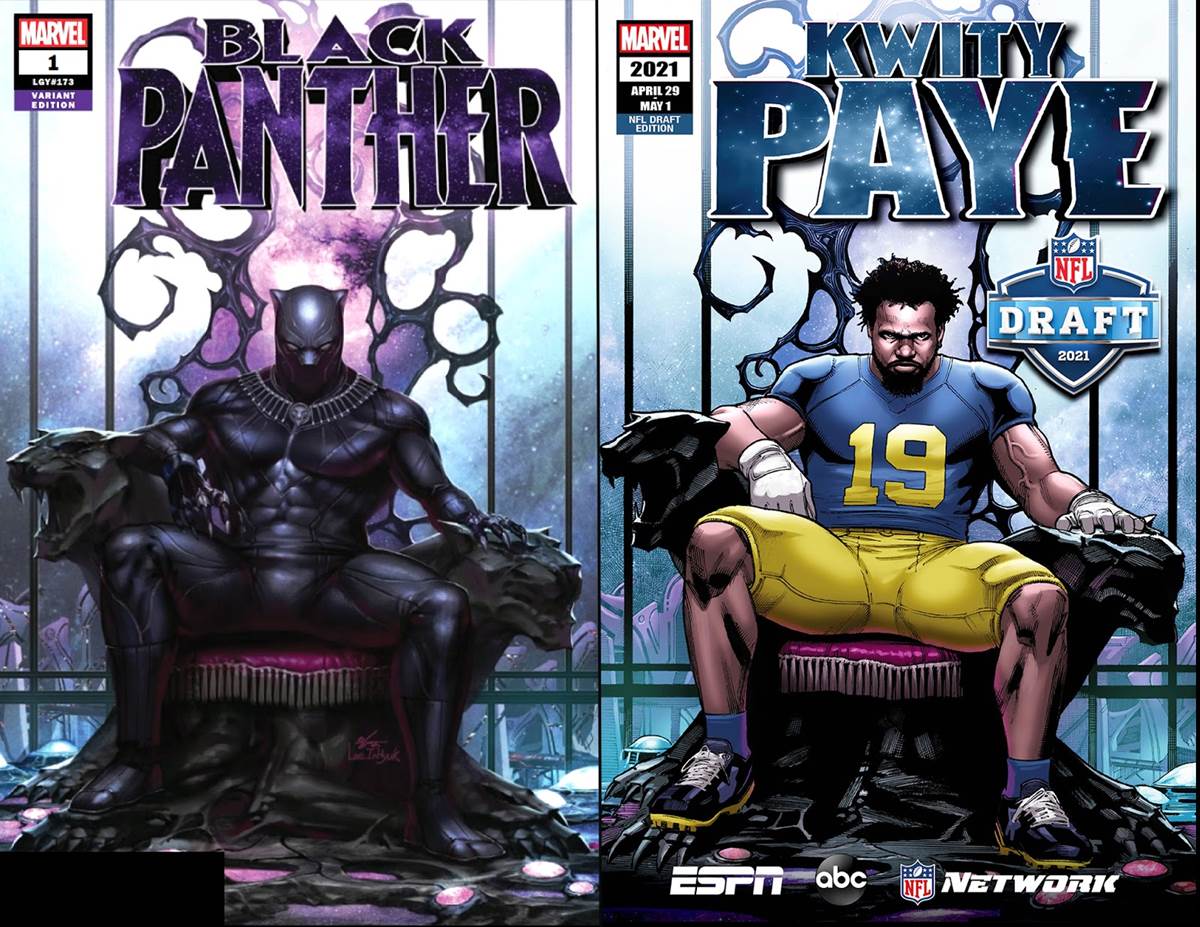 “Kwity Paye (Michigan) showcases outstanding speed and strength using excellent balance and closing speed as he fluidly twists and battles to rush the passer on the football field. With roots outside the U.S., Paye has made his mark as an elite pass rusher who is on his way into the NFL. Black Panther is a regal presence on the Avengers roster with similar quickness and tenacity. 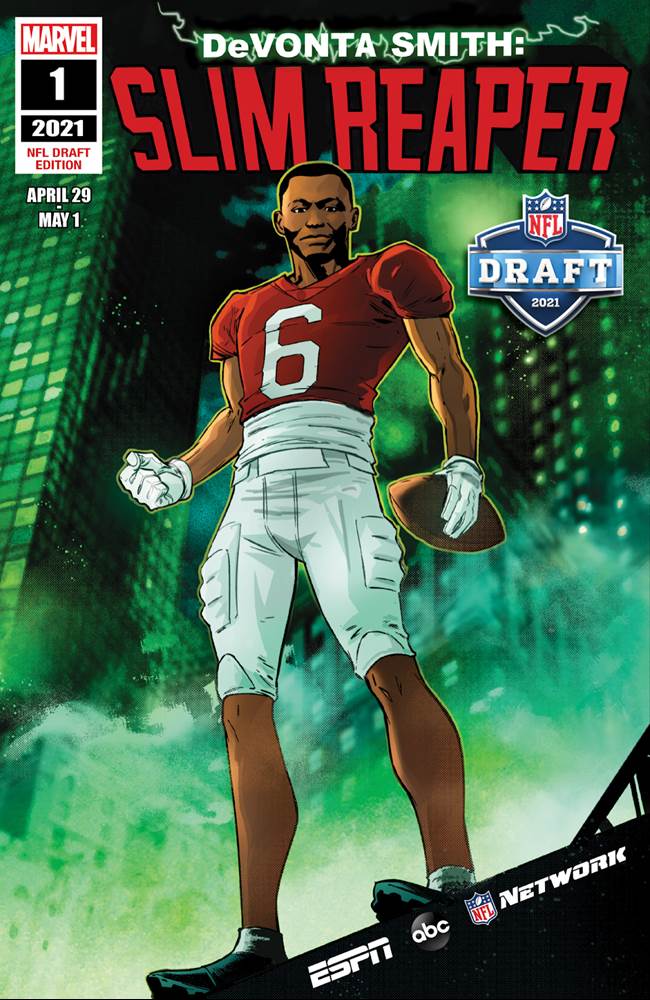 “DeVonta Smith (Alabama) is a “deadly” force to opposing defenses. Also known as “The Slim Reaper” by his teammates, he is an acrobatic, explosively quick phenom on the football field, overcoming much larger opponents with ease… like a certain Marvel fan-favorite.

We chose this #1 issue cover homage to showcase DeVonta as he prepares to enter into the NFL. Credit: Francesco Manna (artist), Carlos Lopez (colorist); Miles Morales: Spider-Man #1, after Brian Stelfreeze.” 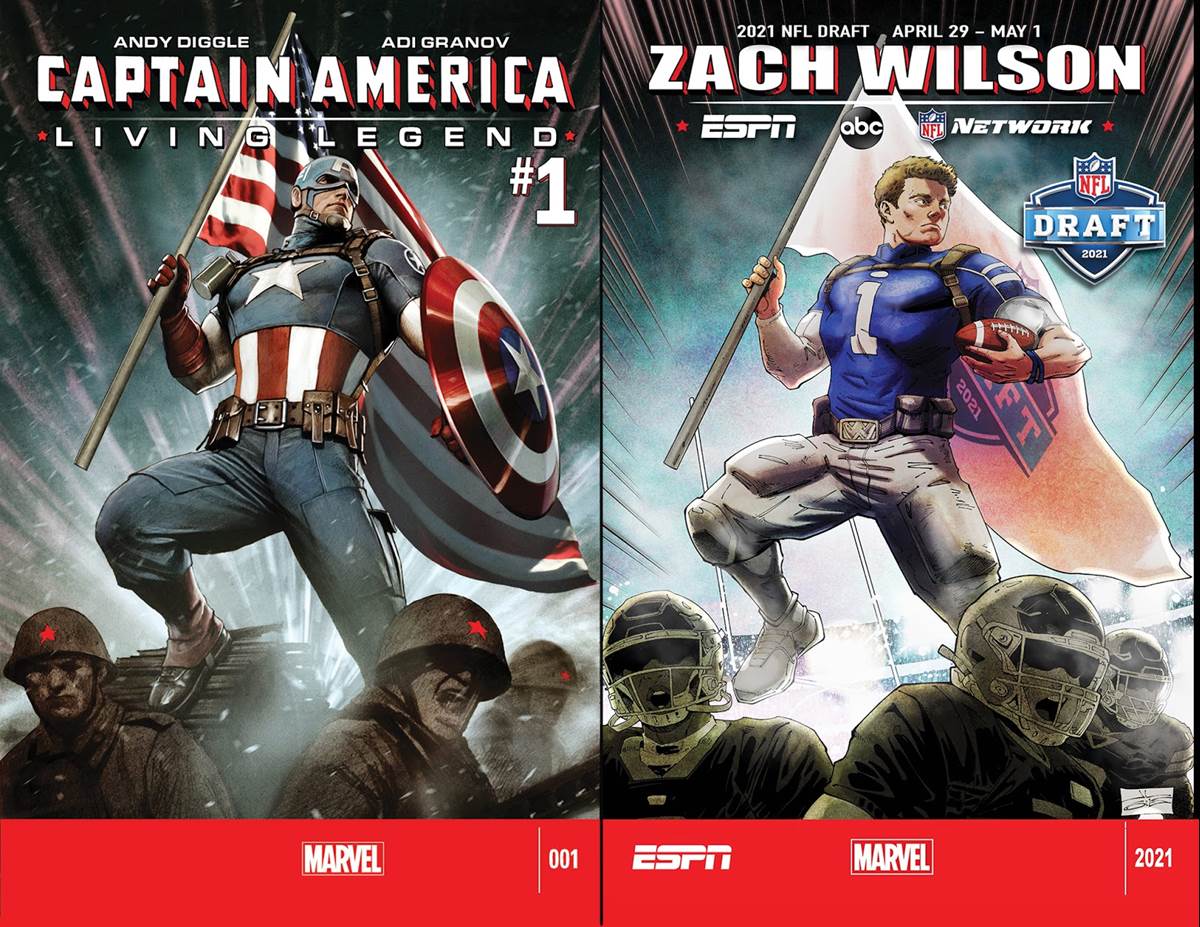 “Zach Wilson (BYU) is known for being a smart quarterback who does a tremendous job as the commander of the offense. But focus too much on his football instincts and intellect at your own peril. While at BYU, Wilson also displayed incredible timing, calm under pressure, toughness and an elite arm-strength that left many opponents utterly defeated. Marvel has their own “commander” in the leader of the Avengers, Captain America.