Disney has announced that Disney+ will debut in over 40 additional countries and 11 new territories this summer, according to The Hollywood Reporter. 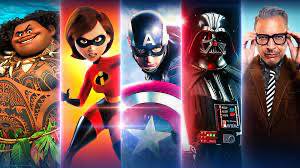