I hate to say the phrase “Trust No One” from one classic television series in regards to another, but really, you can’t trust anything you see in this episode of The Owl House. 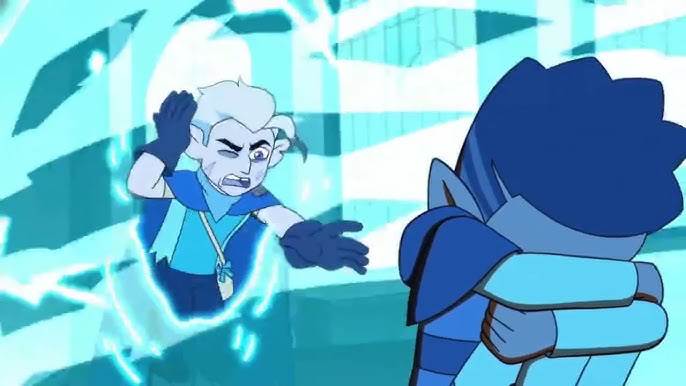 First and foremost, don’t expect to see Luz, Eda, or King in this episode as this takes us to another perspective of what's been going on in the Boiling Isles recently. But first, a flashback where we see young Gus getting used for his smarts and skills and not making any real friends. His eyes also go blue and he basically relives his memories and gets lost in his head. However, this also leads up to him meeting and befriending Willow.

Now, we go back to the present day where Hexside is still practicing multi-track learning under principal Bump, who admittedly thought it was going to be more trouble than it’s worth, but hasn’t seen more enthusiastic students in his career. However, trouble might be closer than we think when the illusionist coven head, Graye appears.

In the cafeteria, Amity is explaining her messages that she got from Luz but can’t seem to understand some of them, including one that appears to say “don’t scare him away.” Considering this is shortly after the revelation of Belos’ plans, Hunter is also on the run and this is likely what the message is referring to. Amity and Willow, though friends in their younger years, are having a bit of conflict as Amity still considers herself the strongest in the relationship even though Willow has grown so much. Gus suggests saying something but alas, Willow says they just started hanging out again, and opts not to. As the girls walk away, Gus discovers Flapjack in the trash can rounding up food scraps, leading a chase into the paranormatorium where Hunter appears out of the darkness, disheveled and if you look closely, clearly reading up on what Grimwalkers (which we learned he is) are. Gus also points out that nobody knows where Luz is, and Hunter does appear to be concerned about it. Gus gives him a sandwich so he can have some real food and heads to the gym, where Principal Bump has called an assembly.

Graye introduces himself and says he’s there because Belos wants to stop multi-track studies at the school and wants to induct the students into covens before the Day of Unity. However, Bump is on his side and suggests the students listen to Graye, who is planning on making fake symbols on their wrists as illusions and can continue their multi-track studies. Edric Blight is pulled in front of the crowd, hesitantly, as he wants to continue the new tracks he’s getting into, healing and beast keeping. As the “fake” sigil is about to be applied, Gus is watching from the crowd and realizes that the whole thing is an illusion, and stops the procedure.

As he calls it out, it is revealed that they are surrounded by Coven Guards and Graye is in a faux director’s chair as though the whole thing were a movie and he begins giving notes on everyone’s performance. He then approaches Gus, who ruined everything, and decides to give him a sigil for another track to ensure he can never use his illusion skills ever again. As he panics, Gus’s eyes go blue and cast an illusion on the whole school. As different scenes flicker by, we see the shadowy Hunter run by and grab Gus, ensuring that he does not receive the sigil that will trap his skills away.

However, as Graye is taken into these different scenes, he appears in the Illusionist graveyard from many episodes prior, home to the Galderstones and tells the guards to make sure they find the boy who did this. Willow and Amity are lost but stuck together in the illusion, and Amity is still condescending towards Willow so, this is what we’re doing with them for this episode I guess.

Hunter and Gus are also stuck together in the illusion, but Gus still thinks that Hunter is the Golden Guard so why is it that he helped him? Hunter says he owed him one for the sandwich but continues the ruse. Coven guards discover them, and say that the Emperor is worried sick about Hunter and try to take him back to the palace. Gus realizes he has a way out and draws a glyph with his foot, allowing them to escape. Once safe, Hunter begins to panic and we see Gus teach him how to calm down with the trick Willow taught him in the flashback. Putting the clues together, Gus calls out Hunter asking him if he ran away but adds that whatever he needs, he’ll be there to help him.

In the library, Amity and Willow find themselves in trouble, and have it out. Amity is trying to protect her friend, but Willow says she can protect herself. Finally, Bump breaks through the illusion and rescues the two of them. In another hallway, Gus and Hunter have made their way out of the illusion, and discover Willow in a hallway. Note, this seemed to happen way too quickly to coincide, so we the audience are already uncomfortable that this is Willow at all. This is actually something Hunter picks up on too, noticing Willow is not acting like the Derby captain he knew.

Hunter challenges Willow and it's revealed that this once again, is all an illusion. Graye comes out of the corner and after more notes, gives chase to the boys, casting an illusion of Belos to scare Hunter as well before Guards reveal themselves and restrain him. They put him to sleep and we are served an act break, wondering what will happen next.

Hunter wakes up, safely with other students and principal Bump who are questioning him but he was being dragged around by Coven Guards until the flying derby team saved him. Sadly, this is just exposition from Bump, we don’t see this occur. Remember though, at this point they don’t know what happened to Hunter, they just want to know what their guards are doing with Gus. Hunter explains the sandwich, the breathing exercise, everything and Willow trusts him, knowing how well she knows Gus.

Hunter explains that Gus was taken to the gym, and Amity and Willow are ready to help…together. In the gym, Gus is being interrogated and Graye wants to know more about the Looking Glass Graveyard. Gus is resistant but still self-hating over how easily he trusts people. Like in that flashback earlier, remember. Graye uses his magnifying glass earring to try and sort through Gus’s memories to find the location of the graveyard, but Gus finally gets into his head again, creating a spell that absorbs Graye into it and makes him relive his past as well.

Out in the hallway, Bump is leading an army of children ready to take over the gym and get Gus back from Graye. Personally, it’s really cool to see Bump use his magic skills alongside the kids and his palisman coming off his head for what seems like the second, maybe third time in the series and help him. The students eventually wrangle all the guards before one of the captain calls for an Abomaton to assist, saying he’s always wanted to play with one of them. Once inside, Willow realizes that Gus is trapped inside his head, but she and Amity need to stop the Abomaton so it’s up to Hunter to get inside the spell and save Gus.

We are then treated to a rapid succession of memories of both Hunter and Gus before we focus on Gus yelling at and scolding himself. Hunter sits next to him and explains how hard it is for him to trust himself and eases Gus and walks him through it. He then recalls the breathing exercise as best he can, and pulls Gus out of his trance. Gus also picked up Graye’s magnifying glass earring, and we see the guards escorting Graye out of the school, still loopy from being forced to relive his own repressed memories by Gus.

As the episode comes to a close, at least we know Graye is a coven head that is definitely on Belos’ side. Then we see Hunter surrounded by the other students and he has to explain what’s going on. It’s a lot to explain, but Principal Bump says that he had better get started.

This episode of The Owl House is now available on Disney Channel and the DisneyNOW app. You can catch up with earlier episodes and seasons on Disney+.