In the second of four special Bollywood inspired episodes of Mira, Royal Detective, Mira is thrilled to accompany Mikku and Chikku to their hometown. 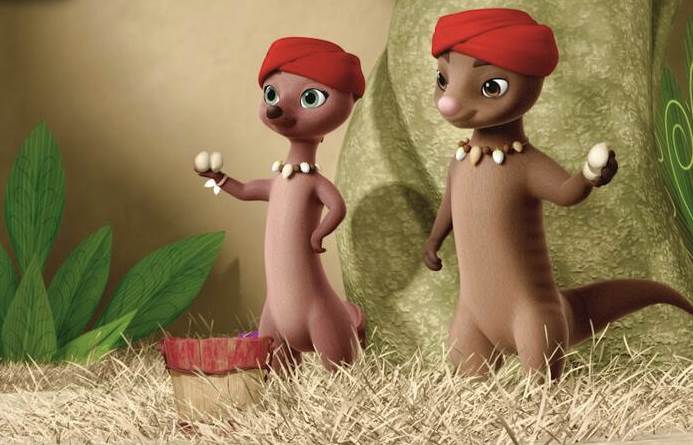 Mira, Royal Detective is being taken to the hometown of her two Mongoose friends, Mikku and Chikku. Together, they set off for their little mongoose village of Nevapur. On the way there though, the trio encounter goats and parakeets, who apparently are big thorns in the sides to Mongoose-kind.

When they get there, Mira meets Mikku and Chikku’s parents, and she learns all about the festival that is taking place, as well as the Mongoose games that are part of said festival. Last year’s Mongoose games winners go by as part of a parade and Mira admires their immaculately made crowns.

Guess what mongooses (mongeese?) are participating in this year’s event? That’s right! Mikku and Chikku! But we also meet their nemesis, their very own family, cousins Anish and Aneesha. They are also vying to be the center of the parade next year.

The games kick off and the aim is to collect nuts. However, when Mikku and Chikku start winning, their nuts go missing. While they are so sure that it was their cousins who stole them so that they could win, Mira, being a professional (and royal!) detective, says since they can’t prove it was them, then we’re on the case!

We find our first clue with the form of some mud prints, but its also time for the second round of the Mongoose Games. This time, more nuts go missing but in a twist, from Anish and Aneesha this time! And, since just like their cousins, they were winning when it happened, they immediately point fingers at Mikku and Chikku. Again, Mira intervenes and says that both sets of cousins are in the clear.

That means it’s time for the third round, and it's the Mongoose Freestyle Face Off. I should have known what this meant, but alas it was still a surprise when the Mongooses all started freestyle rapping. Though I did enjoy the subtle 8 Mile reference referring to Mom’s dinner dish of choice, I know that nobody in the target demographic for this show would ever understand why their parents are laughing.

While everybody was enjoying the rapping of the mongooses, someone or something has broken into the cage where all the nuts for their festival feast have have been kept and taken everything, ruining the upcoming feast. Mira is still on the case and looks for more clues, realizing that the lock has been chewed off. She rounds everybody up and they go to where all the parakeets are, knowing that the birds might have the nuts. Sure enough, Mira and the four Mongooses have found them, but all that was left was the shells. Fortunately, they know where they can get more nuts and save the feast.

Mira knows that the mongooses must all work together instead of against each other to collect the nuts. She volunteers her elephant bag (which from far away looks like the tag of a beanie baby from 1998) so they have a way to carry them all. After they round up all the nuts that they can find, one of those pesky goats comes along and takes it, running away with every last nut leaving no chance for some kind of festival feast. However, with more advanced teamwork, and a little help from the parakeets who happened to retrieve a net that the mongooses were using earlier, they managed to capture the goat and bring all the nuts back to the festival.

Back at the Mongoose Festival, the announcer reveals that Mikku, Chikku, Anish, and Aneesha are all the winners this year thanks to their efforts in saving the festival feast. And, for her help in solving what happened, Mira gets a special human sized crown as a gift from the Mongooses.