Sorry for the delay on the photo tour — summer got away from me but we will continue our grand circle tour of Hong Kong Disneyland with the land of the future Tomorrowland! If you are jumping on at this point, make sure to see the overview of the resort in Part 1 and Main Street USA in Part 2 first. Tomorrowland in every Disney Park has been a challenge, being able to predict what will be “tomorrow” worthy has always caused debates between fans and changes in theme parks more than anything else. The Hong Kong Disneyland’s Tomorrowland, as with the rest of the park, is just a “best of” from other Disney Parks with Space Mountain, Buzz Lightyear Space Astro Blasters, Autopia, and Orbitron.

The Orbitron at the center of the small land is just a redressing of the Rocket Jets/Astro Orbiter mixed with a four person flyer like Aladdin’s Magic Carpet attraction with one row being in control of the up and down and the other row having the ability to initiate sound effects. 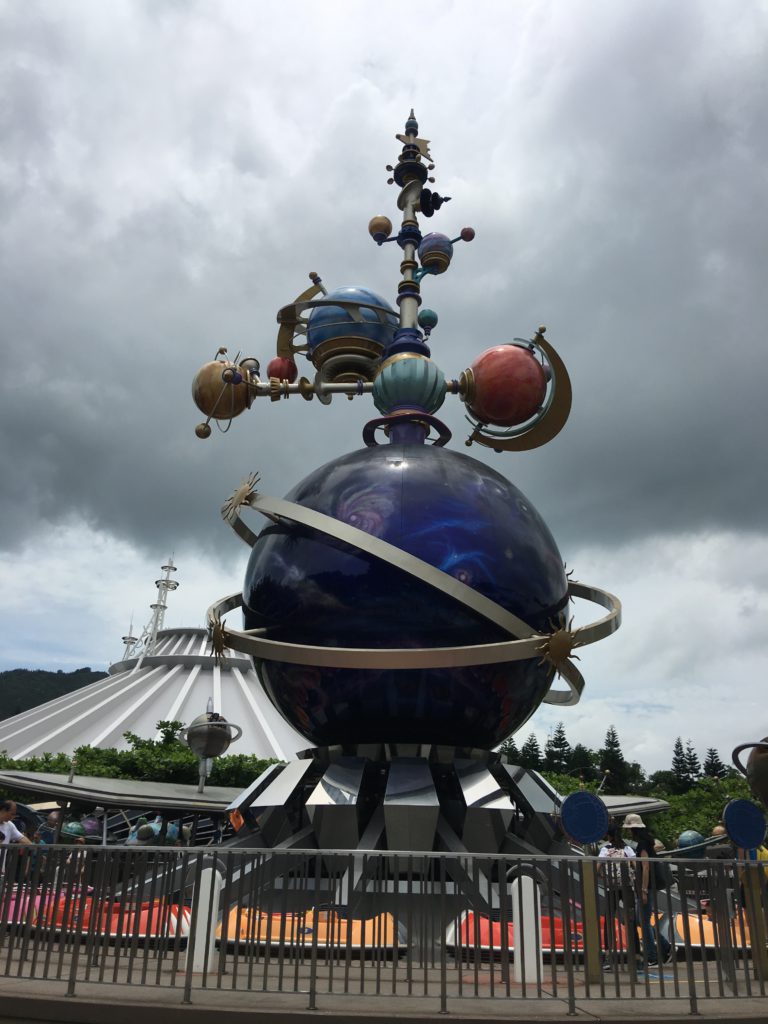 Moving to the right of the entrance of the land we have our first dining experience: the Starliner Diner. 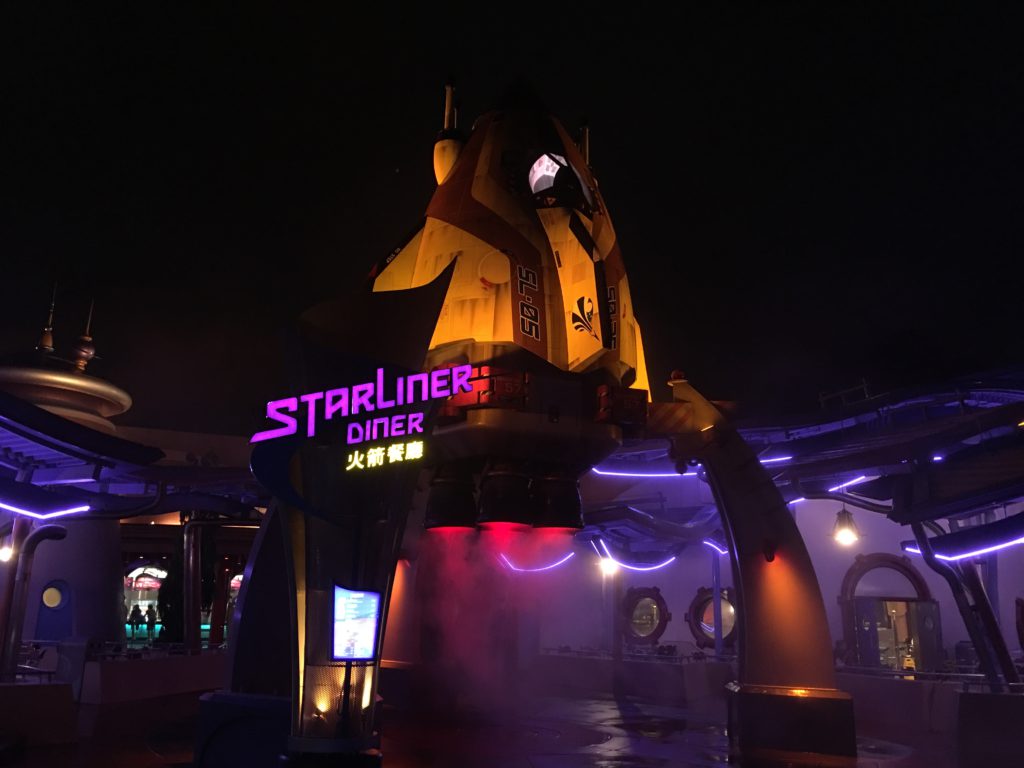 09Asian influence as some of the other dining locations in the park. Heading deeper into Tomorrowland, we come upon the second biggest disappointment of my trip to Hong Kong Disneyland: Buzz Lightyear’s Astro Blasters. This attraction is almost a carbon copy of the attraction of the same name that had opened just months prior in Disneyland. From the safety spiel in the queue to the curvature of what would be the room in Anaheim that was previously used for the 360 room. 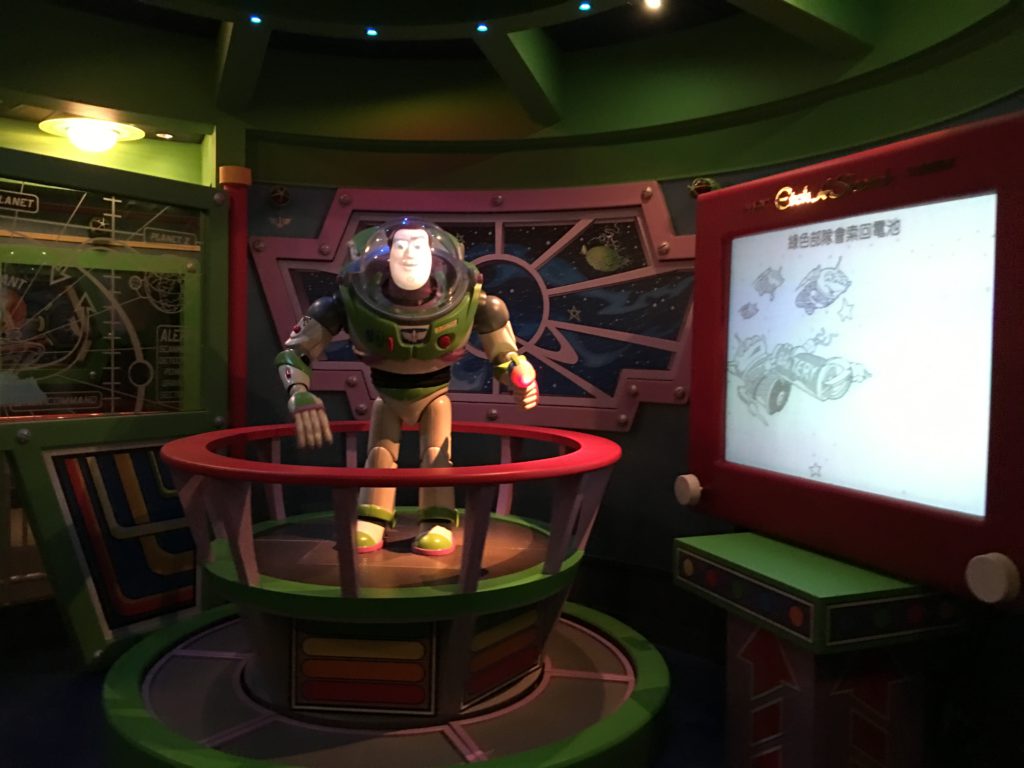 Next to Buzz, we have the future attraction of Marvel’s Iron Man Experience opening later this year. A Star Tours type attraction that will take guests through the streets of Hong Kong with Iron Man fighting off Hydra as was talked about at the 2015 D23 Expo Parks & Resorts panel. 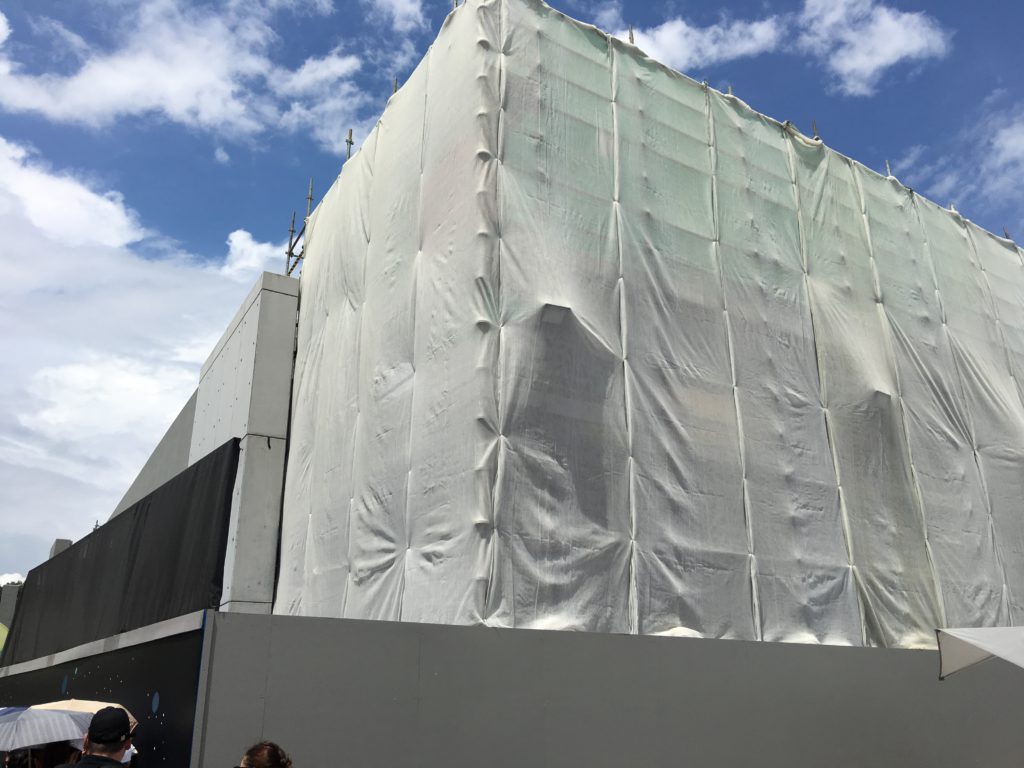 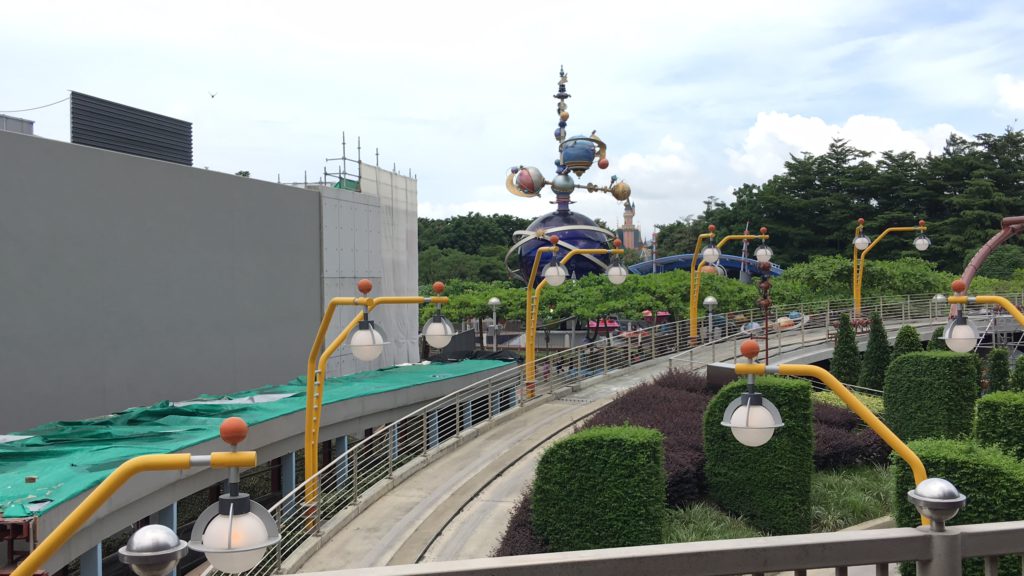 Next door to the new Stark building is/was the given Tomorrowland attraction Autopia. Since 1955 kids have been enjoying driving their first cars through Tomorrowland while their parents held on tight. When Hong Kong Disneyland opened their Autopia in 2006 there was a true Tomorrowland twist: it was the first with electric cars. Originally opened with three tracks including one that did a large circle loop out into Tomorrowland, when I was there for its “last day before refurbishment,” only two were operating as the third had the stage for Jedi Training being built inside the loop. After waiting 90+ minutes, longest wait for any attraction in all of Hong Kong Disneyland, thru one of the hottest queues in the entire park, I was able to enjoy Autopia.

As of today, Autopia has been removed from the Hong Kong Disneyland site altogether, lending to the rumor that the attraction has been moved onto the extinct attractions list, so this video may be your only chance to experience this Tomorrowland classic:

For our next attraction, we jump in the way back machine to 2002-2003 when Hong Kong Disneyland was really coming together and, at the same time plans for Disneyland’s 50th anniversary were being kicked around, Space Mountain was in need of a major overhaul. So being the cost saving company Disney is, instead of just building one new track for Anaheim, they had an exact duplicate built for Hong Kong Disneyland. While there are small details such as no long and winding ramps to get to the load platform, the ride is so much the same as the Anaheim one Hong Kong that it’s where the Ghost Galaxy overlay came from and where the Hyperspace Mountain was exported to. 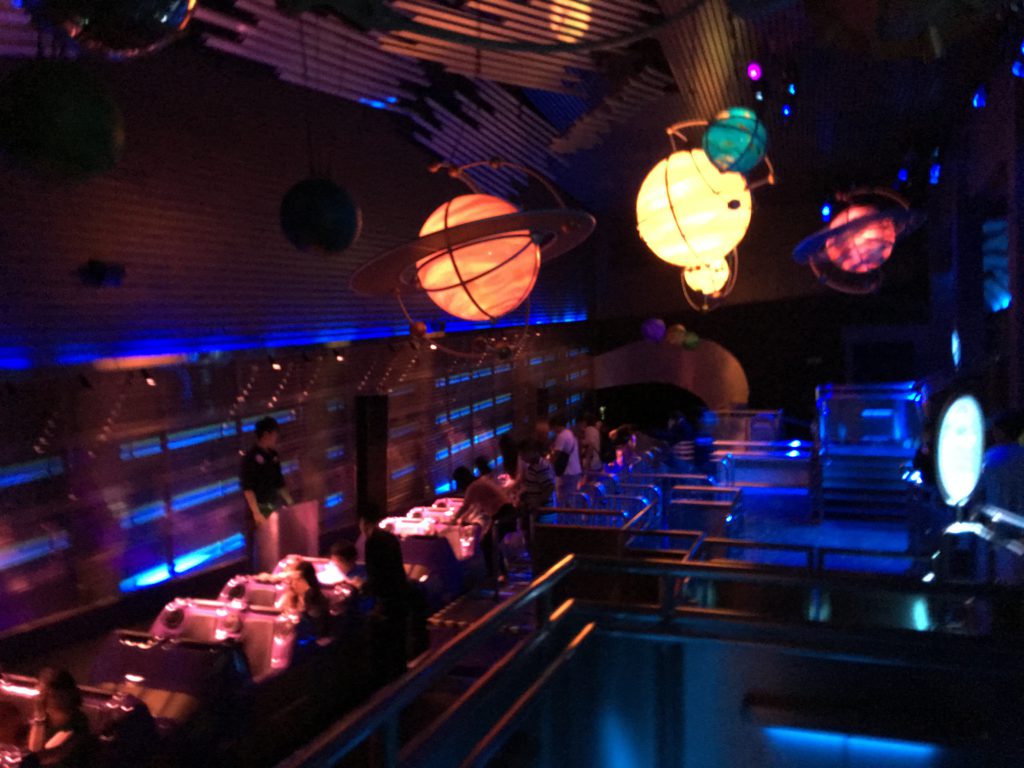 Having not been on Hyperspace Mountain in Disneyland by the time I rode the one in Hong Kong I didn’t have any way to compare, but now having been on both it really is almost the exact same ride down to the queue video with Admiral Akbar advising pilots they would meet squad 7-7 in reference to the opening year of Space Mountain in Anaheim. As I mentioned with no hiding ramps it cuts down on the interior space, so the main part of the queue was outside till it was cut down by placing a FULL SIZE X-WING in place of half the switch backs. The day I arrived in the park was the official kick off of their “Star Wars Tomorrowland Takeover”, which is more catchy than “Season of the Force.” Besides Hyperspace Mountain and the soon to be opened Jedi Training, the former Stitch Encounter attraction (Turtle Talk with Stitch) had been replaced with a meet and greet area for Chewbacca and R2-D2. 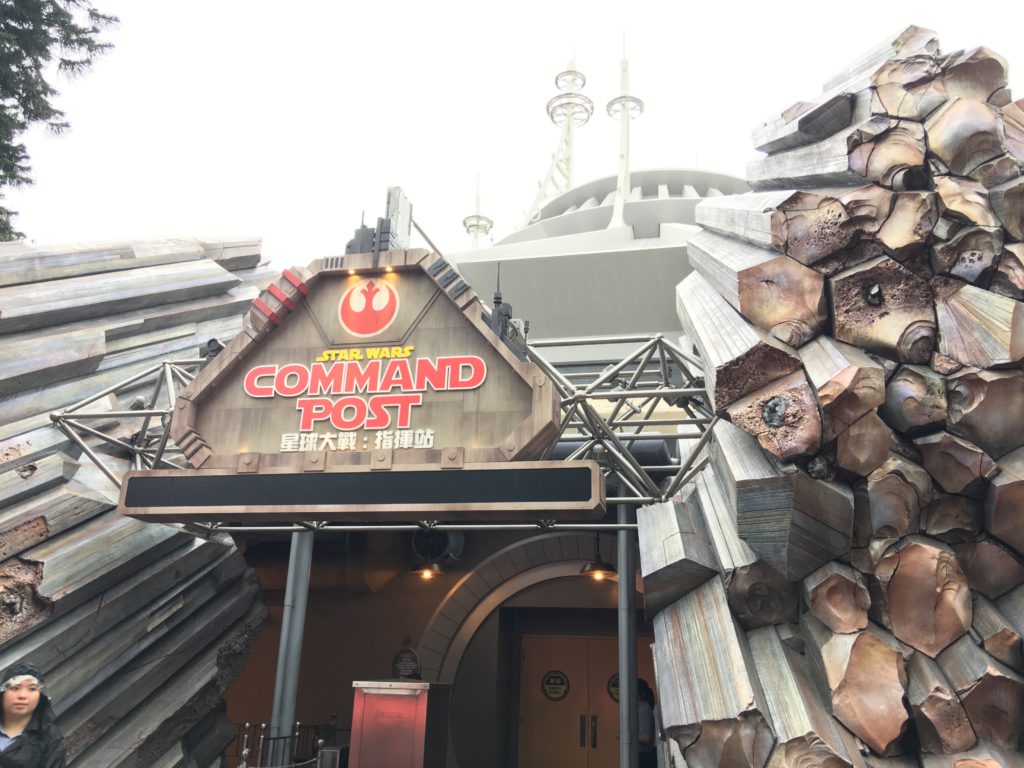 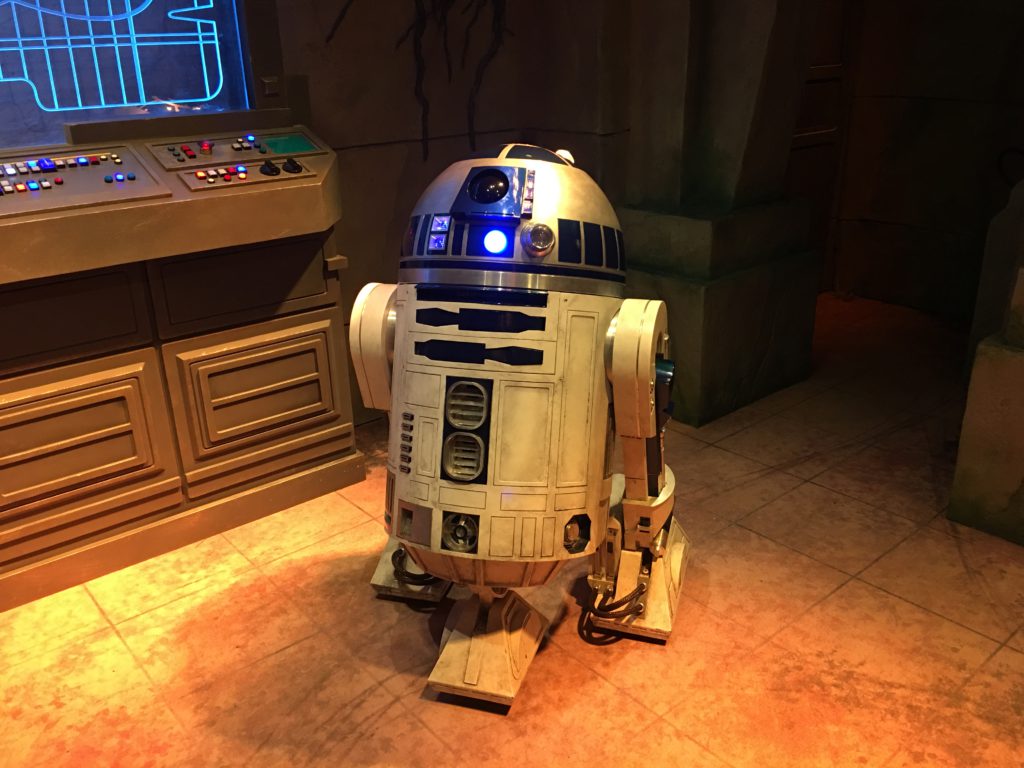 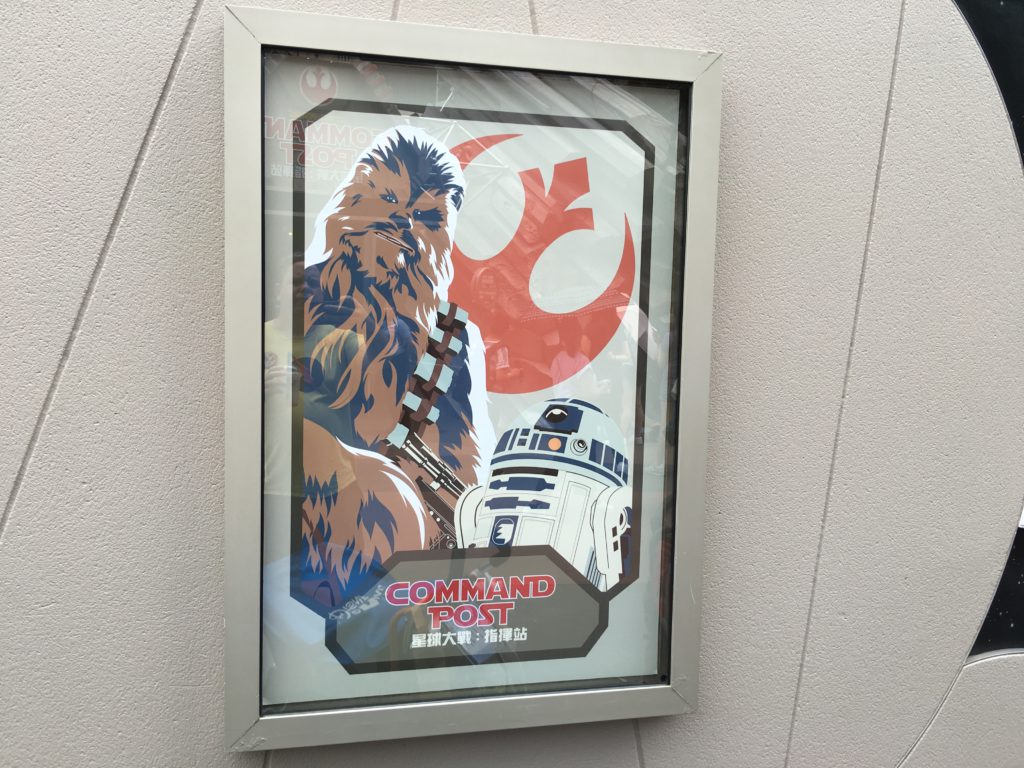 Rounding out Tomorrowland, we have the Comet Cafe another dining option. This one is grab-and-go, but with a wider range of options. Unfortunately, this location was not open during my visit but the Cast Members were making great use of the location in front to entertain smaller guests with Star Wars based games. That wraps up Tomorrowland, next time we take a trip to the happiest land of them all: Fantasyland!