Without Epcot, There Would Be No “Coco” 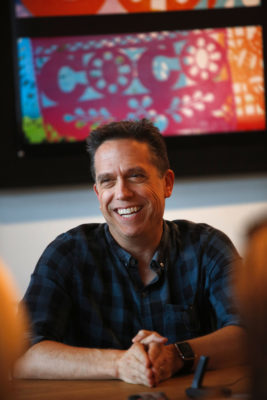 They say art imitates life and life imitates art. This phrase has perhaps never been more true than in Disney Pixar’s Coco, coming to theaters on November 22nd. I was lucky enough to step into the halls of Pixar Animation Studios in Emeryville, CA, earlier this month to learn more about the film. As a Disney fan, I was surprised by how many times the filmmakers revealed Disney art influencing the story in more ways than one.

“When I was kicking around ideas for a new film, I was actually at Epcot with my family toward the end of promoting Toy Story 3 and we were in the Mexico pavilion,” recalls Director Lee Unkrich. “I was looking at some papier-mâché sculptures that I’ve since learned were actual real folk art, not just made by Disney, that they had actually gotten their hands on from the Linares family. That started the first little seed of me thinking I had never seen anything like that in animation or live action, there hadn’t been a film about Dia de los Muertos.”

At Pixar, simply having an idea doesn’t necessarily mean anything will become of it. “I just started to see a lot of potential for a story and pretty early on, we pitched it to John Lasseter. John always likes directors to pitch him three different ideas so I had three different things that I pitched, but John immediately said ‘This is the one.’ That happened to be just a few weeks before Dia de los Muertos in 2011 so we quickly got on planes and headed down to start our research.” 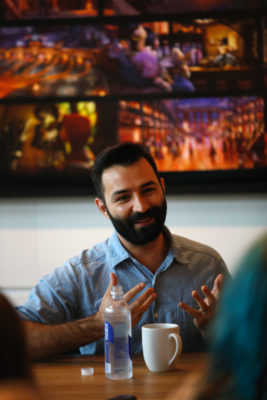 Co-Director and Writer Adrian Molina was along for the ride on one of those early trips. “When it came to research, that meant traveling to Mexico for Dia de los Muertos in order to experience the culture and the celebration first hand.” The team walked away from these trips with a list of elements of the celebration that would help shape the story. These included ofrendas (alters of offerings), marigold paths, and candlelight vigils.

“Dia de Muertos is a heritage tradition that takes place primarily in Mexico,” Molina adds. “Its roots go back to Mexico’s pre-colonial indigenous history. The souls of your loved ones are welcomed back to the land of the living to reunite with their loved ones and their families. Far from being a somber occasion, it’s actually this grand family reunion, it’s a time to celebrate and be joyful and it’s also just a rich and beautiful tradition.” 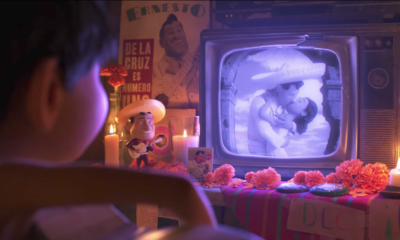 In a scene early on in the film, the main character’s love of music is conveyed as he hides in the attic watching old VHS recordings of his favorite musician, Ernesto de la Cruz. This sequence, seen in the most recent trailer, was directly influenced by Adrian Molina’s upbringing. “I was in high school and I was really interested in animation. The only place where I knew I had seen anything about animation was the Disney Channel, they would rerun old episodes of The Wonderful World of Color and every so often you would see a documentary clip where they’re talking about how they’re making the movie they’re making like Cinderella, Sleeping Beauty and 101 Dalmatians. I didn’t know when those episodes would come up and the other problem was they only played them at 4:00 am, so there was a 3-month span where I’d wake up at 4:00 am, put the VHS in and hit record, crossing my fingers that one of these clips would show up and that I’d have a copy of it. And eventually, it was one of those episodes where animators Frank Thomas and Ollie Johnston were showing the process, they were flipping through the drawings and showing the pencil tests and all of a sudden, I was getting all this information that I was craving. But even more than just the information, I felt like I was connecting to those artists and to the passion.” When guests visit Mexico in Epcot, they will also find the opportunity to add colorful wooden carvings called Alebrijes to their souvenir collection. This tradition has also found its way into Coco and Rigging Artist Alonso Martinez had a passion for them growing up, which he brought to the project. “Since I was a kid, I’ve been collecting them. Every time I would go down to Mexico as a kid I would sneak out to try and find the most beautiful one. To me, it was almost like this kind of Pokemon hunting. The thing that became very apparent to me was that going to all these different cities in Mexico, you actually have all these different families that make Alebrijes and they each have their own flavor that they bring to them.”

Interestingly enough, Mickey Mouse has been a public figure longer than Alebrijes have been in existence. “When we think of traditions in folk art, we’re used to thinking about things that are very, very old. But proportionally, Pedro [Linares] came up with this idea in 1936, which is not that long ago. He was a piñata maker who fell sick, he had an illness that lead to a fever dream and in this dream he was in a forest where he started seeing these chimera animals that were super colorful. They were like donkeys with wings and snakes with chicken feet. Like any artist, when he woke up he wanted to capture the essence of the thing that he saw. He originally made them out of papier-mâché, which was his craft, and later they were reinterpreted as wood carvings that are a special type of wood found in Oaxaca that is called copalillo wood that is very soft and easily carvable.” 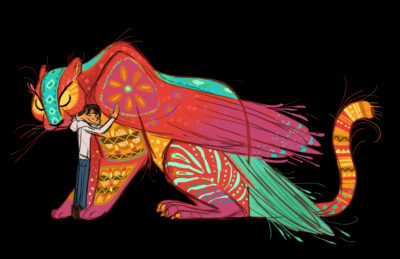 The next time you’re in Epcot, you can add an Alebrije to your collection. The main Alebrije in the film is named Pepita, a guardian spirit who protects Miguel’s great grandmother and creates some challenges for him during his time in the Land of the Dead. However, Martinez did share that the talented artists producing these carved figures in Epcot are planning a special Pepita figure that will exclusively be sold at Epcot. Again, art imitates life and life imitates art. Perhaps the only way this circle could come around even more prefectly is if a Coco attraction becomes a permanent part of the land and with the direction Epcot seems to be heading, the possibility doesn’t sound farfetched at all.

Pixar’s Coco is still three months away, but we will have more great coverage as we get closer to the film’s release to wet your appetite and get you more excited for this next chapter in Pixar history.