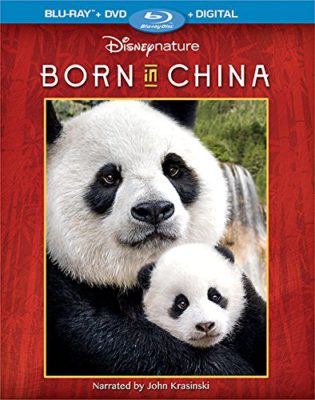 Disneynature Born in China is one of my favorite films in the series. It returns to the franchise’s earliest format, focusing on a variety of animals rather than just one. This time, the commonality between the species is that they all live on the same continent and all have young ones to care for.

Set against the beautiful backdrop of some of China’s most remote locations, Born in China spends most of its time following the lives of a family of snow leopards, pandas, chiru, and snubbed-nosed monkeys. Spending a little over a year with each of these families, we get to see these babies grow and fight to survive in a variety of ways. This adds to the richness of the film as a whole, avoiding the issue with some of the films, like Bears, which became somewhat dry at times.

Nothing is cuter than a baby panda the size of a leaf, a pair of snow leopard cubs, newborn chiru learning how to walk, or a snub-nosed monkey who just wants to cause mischief. The cute factor of Born in China is astounding, but the struggle each parent faces to keep their offspring alive can at times be hard to watch.

Born in China is the first Disneynature film to feature a lead animal’s quest for survival prove unsuccessful. You grow so attached to all of these creatures that when one doesn’t make it, it’s a striking reminder of the harsh realities of nature. There’s no gore or graphic imagery and it is presented in the most beautiful way possible. You find stories like this in many of Disney’s films, including Bambi and The Lion King, but because these are real animals and you get so attached, the emotions can be overwhelming. The whole film is poetically bookended by red crowned cranes, who are said to carry the spirit of a recently departed animal to the next world every time they take flight.

Born in China can now be yours to enjoy again and again thanks to this Blu-Ray/DVD/Digital Combo Pack. Through purchasing this release, a portion of the sale will become a donation to the World Wildlife Fund to benefit pandas and snow leopards in China thanks to Disney’s Conservation Fund. Through bonus features on this release, you can also learn how to become a champion for conservation in your own backyard.

The video presentation of Born in China is nothing short of stunning on Blu-Ray. Every frame is a work of art and you will instantly want to book a trip to China. The details are crisp, sharp, and clear. Color levels are breathtaking, with some vivid summer colors contrasting dark and muted winter moments.

The primary audio track is a 5.1 DTS HD-MA mix that fills the rear speakers with score and nature ambiance. It’s a beautiful mix that places you in the heart of every moment. Other audio options include a stereo descriptive audio track plush French and Spanish 5.1 mixes.

Born in China is housed in a standard Blu-Ray case with both discs on the interior covers. Inserts include a code for your digital copy/Disney Movie Rewards and a flier for Disney Movie Club. The case is housed in a foil embossed slipcover in the initial pressing.

Both discs open with ads for Disneynature Dolphins and the Disney Conservation Fund. Selecting “Sneak Peeks” plays additional previews for Disney Movie Rewards and the digital exclusive documentary Ghost of the Mountains. The menu features scenes from the film set to score.

Disneynature Born in China is a powerful and heartwarming film about the beauty of nature. It’s perfect for families to cuddle up and enjoy some adorable baby animals and some acts of true heroism. The Blu-Ray presentation offers impressive visuals and the bonus features give great insight into how this remarkable film was made.

If you enjoyed Born in China, I recommend the following articles: