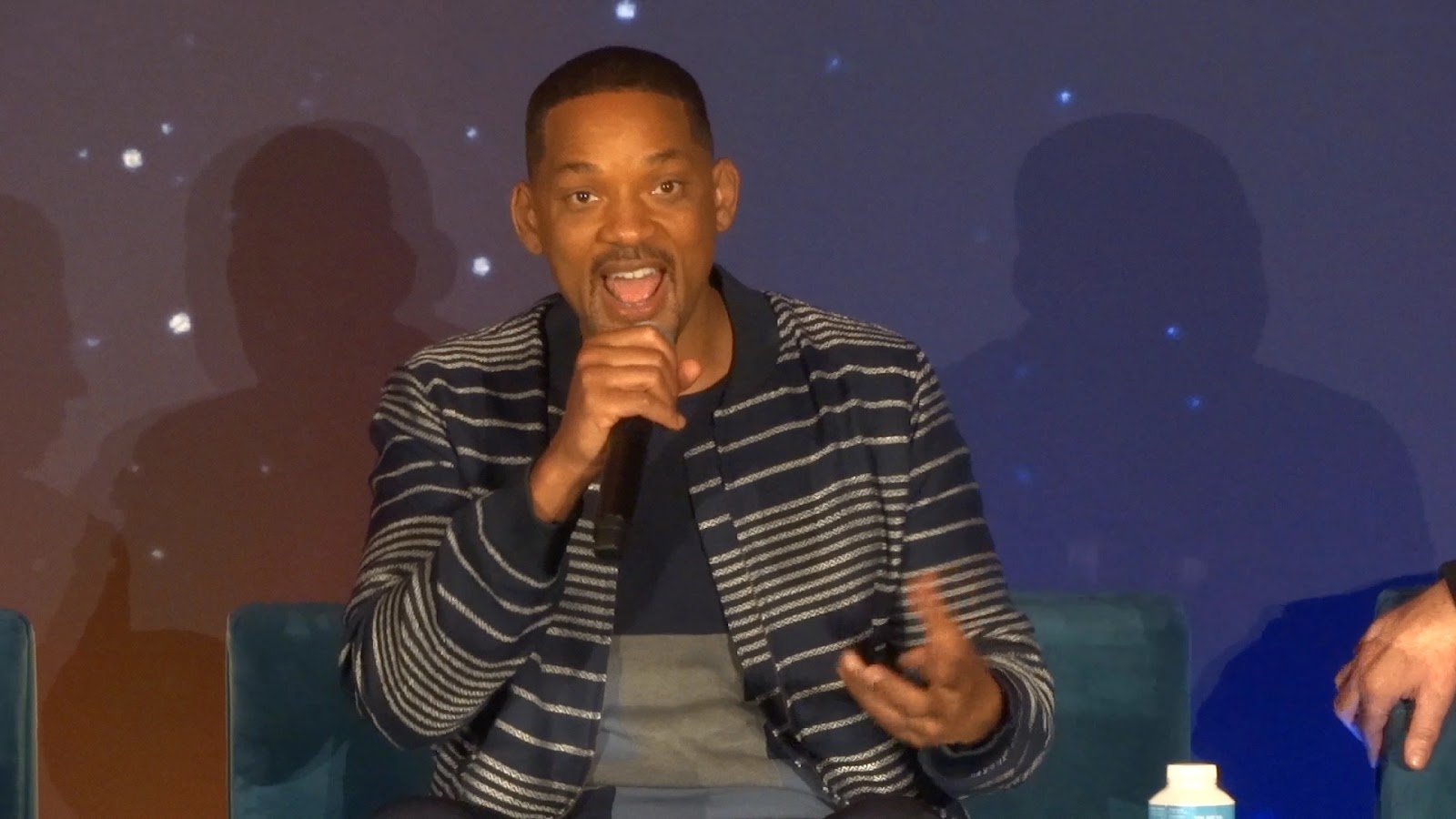 Worldwide superstar actor Will Smith began his career as a rapper in the 1980s, but since then he has become a household name via his six-season NBC sitcom The Fresh Prince of Bel Air and blockbuster movies like I Am Legend, Men In Black, and Wild Wild West.

Now Will Smith is starring in his very first Disney movie (if you don’t count the 1998 Touchstone drama Enemy of the State), taking over the iconic role of the Genie in the studio’s new live-action reimagining of its 1992 animated masterpiece Aladdin. At a press conference this past weekend in Southern California, Smith talked about Disney magic, how he made the Genie his own after the legendary performance of Robin Williams, and what his one wish would be.

“Disney magic is real. [Aladdin] is my first Disney movie, and there’s something that Walt Disney did in the design of [this studio] that at the core of these stories is something that shocks [your] inner child and forces it to come alive, and smile and appreciate the moment. So for me, coming into this definitely started with fear, [considering] what Robin Williams did with this character. He just didn’t leave a lot of room to add to the Genie, so I started off fearful. But then when I got [going] with the music, it just started waking up that fun, childlike, silly part of me, and this [ended up being] the most joyful experience of my career.”

“The song that got me over the hump of, ‘Yes, I can play Genie,’ was ‘Friend Like Me.’ I went into the studio the first day and I really wanted to play with it to see if I could add something to it. And [after] literally thirty minutes in the studio, starting to play with it and finding that 94/96 BPM range… that’s old-school hip-hop. So I grabbed the Honeydrippers’ ‘Impeach the President,’ and I had them throw that breakbeat under there. I messed with that and I was like, ‘I’m home.’ I started playing with the hip-hop flavor, and then the Genie was really born in my mind from the music. I understood once I played with ‘Friend Like Me.’”

Will Smith went on to discuss the path that led him to choosing his role in Aladdin after a long break from acting. “I guess I had sort of hit a ceiling in my life. I had created the things that I could create in my career, I was getting to the end of my wisdom with leading my family, and I got to the point where I had a bit of a collapse of my life and creations. So I took a couple of years off, essentially to study and journey spiritually. And Aladdin was really my first coming-back-in and seeing if my heart was even still in this kind of performing.”

“What I discovered is everything starts with, ‘What am I saying to the world? How does this piece contribute to the human family? Can I go around the world with the ideas that the movie represents and can I teach and preach these ideas in good conscience? Aladdin checks all of those boxes. I love the idea of Genie, and one of the things that I related to is that the Genie has shackles. [He] has these spectacular powers, but he’s shackled. He is a prisoner of his spiritual fate, and that’s sort of how I felt with ‘Will Smith.’ I was sort of shackled by ‘Will Smith’ and then these last couple of years, I’ve just started finding my freedom. I’m getting free of ‘Will Smith’ and getting more comfortable being me. Aladdin was that first step back out.”

Speaking about working with director Guy Ritchie (Sherlock Holmes), Smith had this to say: “I heard an idea in ‘The Alchemist’ about a shepherd leading from behind, and that’s a really beautiful approach that Guy takes. The first five or six takes, he doesn’t say anything. He just watches. He just lets you do it, and he sees what everybody’s choices are naturally. Then he comes in and just gently starts to guide everybody back towards what he wants. He’s wildly collaborative and open, and it’s a rare combination to be that open and that definitive at the same time. It’s a very difficult thing to do, and he has mastered that very well.”

As to Aladdin’s diverse cast and Middle Eastern roots, Will Smith commented, “I think it is critically important to be able to pull stories, and colors and textures and tastes, from around the world. I think that in this particular time in the world, that kind of inclusion and diversity will be a critical part of [furthering] our connectivity. We have more connectivity than ever, but transitioning that connectivity into harmony is going to be really critical. I think these kinds of interactions in these types of movies are a powerful global service, so it was important to me. I spent a lot of time in the Middle East also, so this one in particular was critically important in that way.”

Smith went on to talk about the movie’s production designer Gemma Jackson and the work she and her team put into  bringing the world of Agrabah to life. “The ultimate compliment, from the actor’s point of view, is ‘We were transported to the time and place.’ And that’s what happened when we walked on that set. It was in the textures of the walls, and [even] the stairs were real. You could go up and onto the rooftop. It was a powerful way to transport the actors into the emotions and the smells of the time and place.”

The actor also had very nice things to say about Aladdin’s dance choreographer Jamal Sims. “Choreography was sort of the vortex of everything. If you’re doing a dance sequence, choreography [becomes] the vortex of wardrobe, of set design… All of the actors, we decided how our performance was [going to be], things our characters would or wouldn’t do, and that had to get worked into the dancing. Everything sort of fell on Jamal to make it come together in a dance sequence, and he just captured the center of all of those things and made it turn into something that looks hot in a dance move.”

“What was really great for me in terms of the Genie, and a lot of people don’t recognize this, but the Genie is one-hundred-percent CGI. People look at it and they think it’s my face blue, and it’s my body, [but no]. There’s none of me in the Genie. The CGI work was so good that they don’t even get credit for it.”

Smith admitted to plenty of improvisation on the set of Aladdin. “I would just be on set, we would run the scenes and everything, so I could improv because I knew it wouldn’t necessarily be in the movie. Then Guy watched the whole movie, and I had another chance to go back, and we could play with lines and make adjustments because they were going to create in [in post] anyway. So for me there was tons of improv, and it got to the point where Guy was open and anybody could throw something in. It would become a fun thing on set to try to find that number one answer.”

Finally, when asked what his three wishes would be if he stumbled across the Genie’s lamp, Will Smith narrowed it down. “I would have one wish. My one wish would be divine understanding. I just turned fifty this year, and that lack of understanding– confusion– is the mother of fear and violence. So for me, I would absolutely wish for divine understanding to be shared with all. I think that understanding is the seeds of peace.”

Disney’s Aladdin arrives in theaters this Friday, May 24.