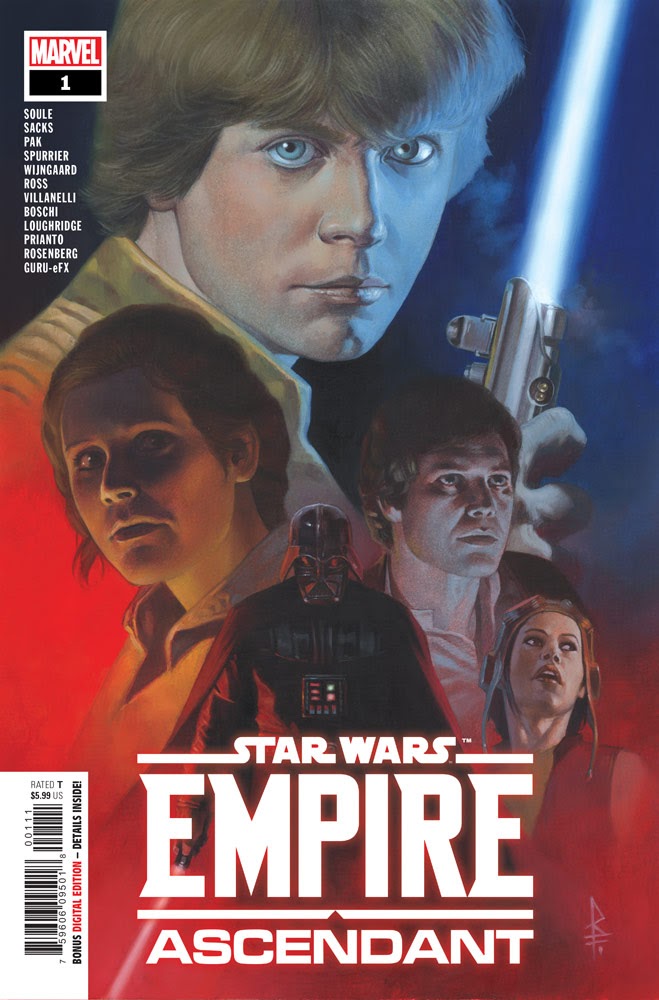 The modern era of Star Wars comic books began in January of 2015, after Disney’s acquisition of Lucasfilm and the graphic storytelling rights to the franchise reverting back to (the also-Disney-owned) Marvel Comics. And the first phase of that era came to an end this fall with the temporary conclusions of the main ongoing Star Wars title and Star Wars: Doctor Aphra, plus the miniseries Star Wars: Target – Vader, and Star Wars: Jedi – Fallen Order: Dark Temple.

After four full years of stories across 75 issues, Star Wars (which took place after the events of Episode IV – A New Hope) had finally caught up to The Empire Strikes Back, with our heroes on their way to establishing the rebel base on the ice planet of Hoth– though for whatever reason we still never got to see that encounter with the bounty hunter on Ord Mantell. With a planned relaunched partnered with reset numbering in the new year, Marvel has issued a one-shot fill-in anthology called Star Wars: Empire Ascendant that acts less like a climax to the existing stories and more like a preview of four Star Wars comics coming (or returning) in 2020. 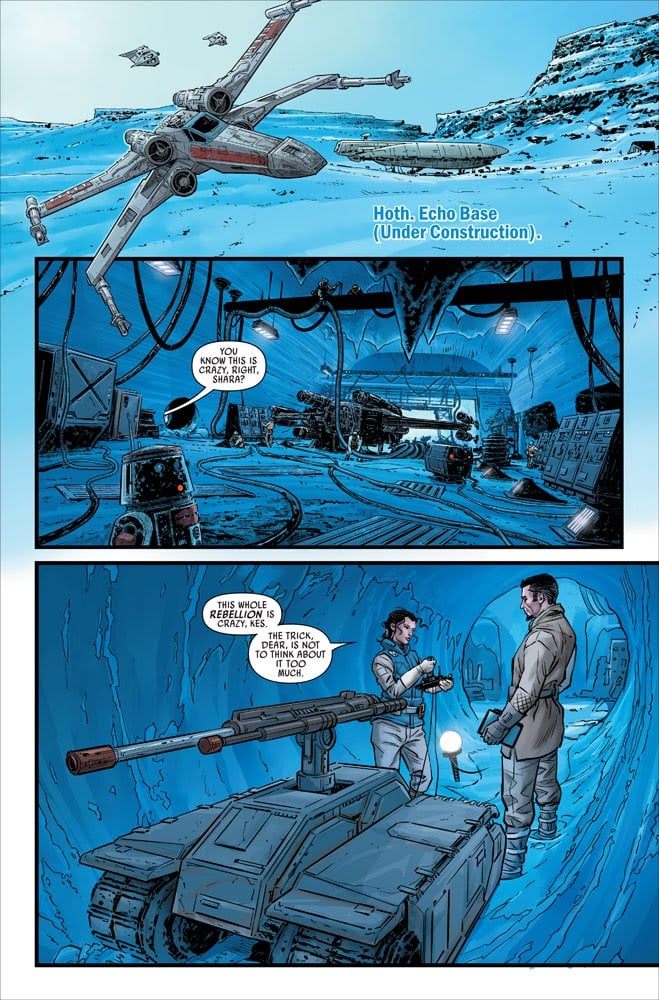 The first tale, entitled “An Echo of Victory,” finds two Rebel Alliance soldiers helping to construct the base on Hoth. They’re using an A-Wing cannon to clear tunnels when their path collapses, trapping them in a cave-in. After a few pages of dialogue we discover these two are– spoiler alert– Kes Dameron and Shara Bey, parents to eventual Resistance hot-shot pilot Poe Dameron. Isolated by their predicament, they begin to doubt the possibility of a rebel victory and assume their lives are not worth saving at the expense of destroying more of the base. Of course, Luke Skywalker proves them wrong by rescuing them with his lightsaber and renewing their hope in the cause. 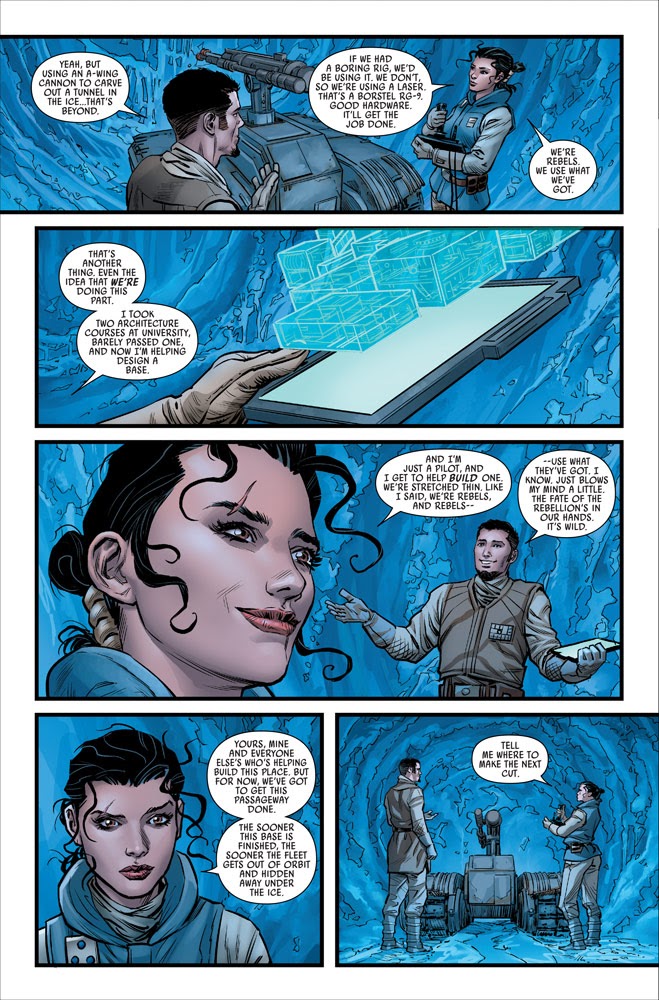 The second story is called “In Service to the Empire,” and sees an Imperial sergeant named Cordo assigned to destroy the rebels’ prototype ion cannon while in command of a squad of Death Troopers. Recalling his chaotic time in service on Mimban (as depicted in Solo: A Star Wars Story), Cordo has something of a nihilistic approach to military strategy. He trains his troopers to achieve victory in their mission at all cost, and they succeed in way he didn’t predict, earning the sinister respect of Darth Vader. Third is “Two Sides to Every Sortie,” which reunites Han Solo with cyborg bounty hunter Bailert Valance. The former hires the latter to protect a living rebel asset– a human engineer in possession of the schematics for Hoth’s planned shield generator. After evading a battalion of stormtroopers, Valance takes the cowardly scientist aboard his ship the Broken Wing and sets out to deliver him to the rendezvous point. There’s a fairly interesting twist after that, and Valance proves once again he is capable of delivering on the letter of his task, if not necessarily the spirit. Finally, in “Epilogue,” we learn the fallout of Doctor Aphra’s final message to the oddball trio she united before disappearing into the unknown at the end of her series– her ward Vulaada, her father Korin Aphra, and ex-Imperial-turned-rebel-leader (and Aphra’s on-again-off-again lover) Magna Tolvan. Together on Hoth, the three unlikely allies find sympathy in each other’s shared plight, and have a brief chat with Luke Skywalker about Aphra’s legacy. Like I said, these tales are less intended to wrap up the previous period of Star Wars comic storytelling than they are designed to launch the next one, but as a bridge between the two they work well enough. I certainly plan to keep reading Marvel’s stories set in A Galaxy Far, Far Away, as most of their output has been at the very least entertaining and at its best some of the most compelling fiction to come out of the current age of Lucasfilm. 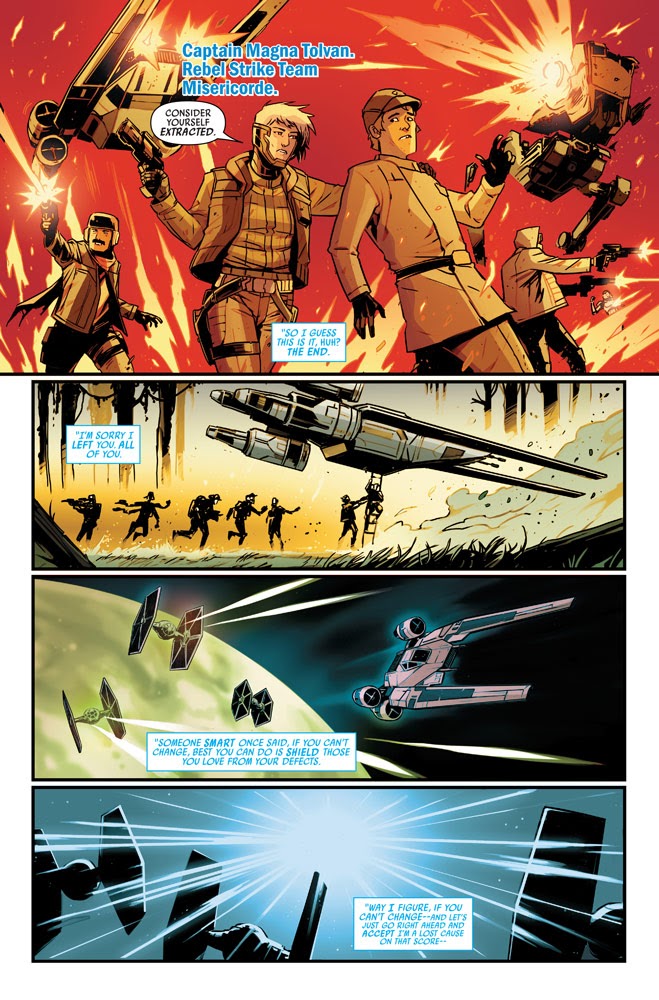