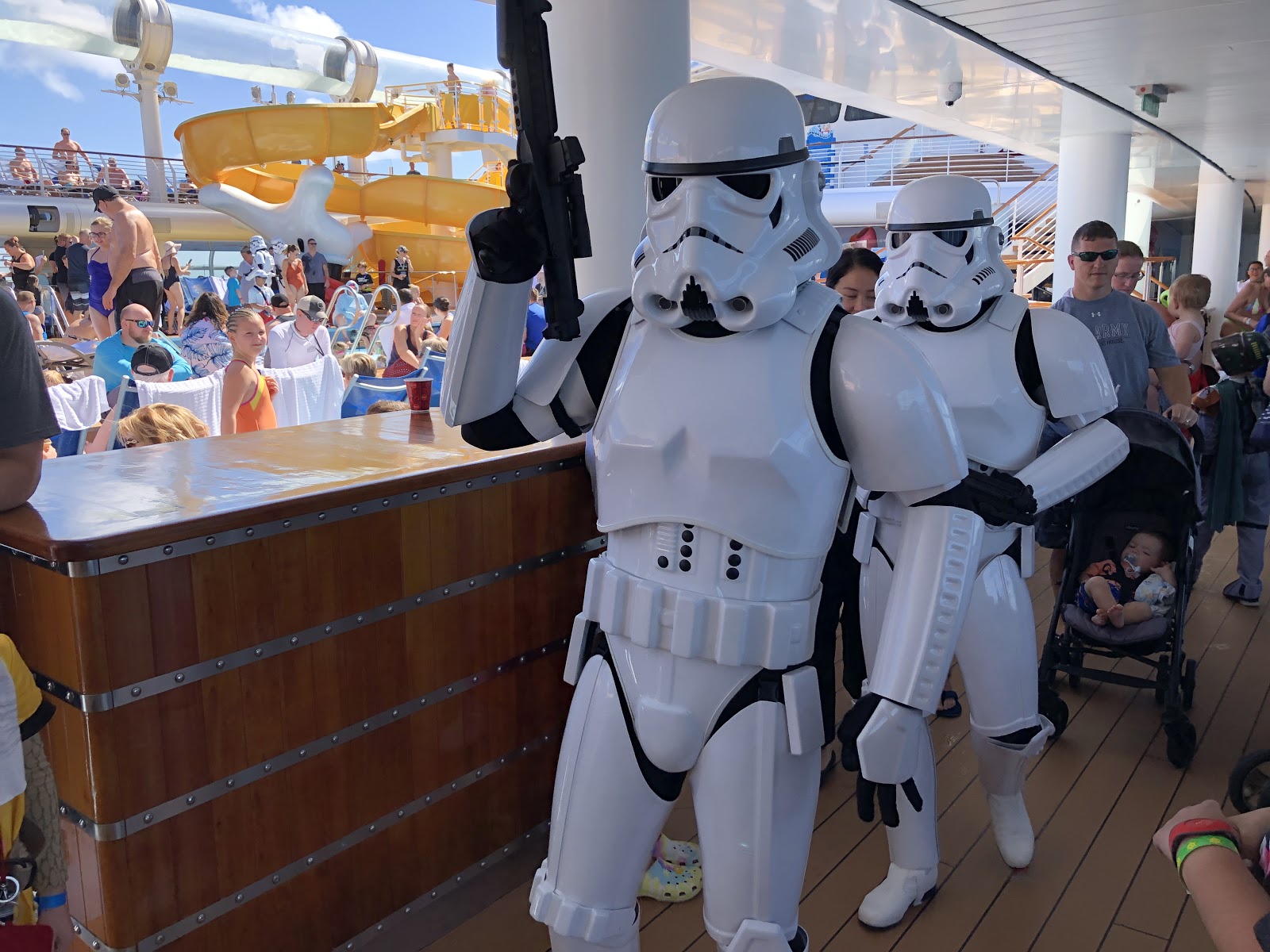 The Star Wars sequel trilogy (and the Skywalker Saga to which it served as the conclusion) may have come to an end, but the Disney-owned franchise is destined to continue for generations to come with additional content coming to the worlds of publishing, television, and eventually back on the big screen. And one very unique way to experience A Galaxy Far, Far Away comes in the form of Star Wars Day at Sea aboard the Disney Cruise Line.

I spent seven nights on the Disney Fantasy last week, and in the midst of a fun-filled sun-soaked adventure through the caribbean, one full day was dedicated entirely to Star Wars– there are character appearances, photo ops, live shows, movie screenings, trivia contests, activities for kids, themed meals, arts & crafts, costume contests and more– all part of Star Wars Day at Sea, which has been running on Disney Cruise Line ship since 2016.

The day-long Star Wars Day at Sea event actually begins late the night before, when Darth Vader and his Imperial stormtroopers take over the Disney Fantasy’s atrium, commandeering the ship through sheer Force– pun intended– as seen in the video above. From that point on, over the next twenty-four hours, most everything you see and do onboard will be Star Wars related, including the iconic John Williams music playing over the vessel’s PA system. Early the next morning, other popular Star Wars characters will begin roaming the mid-ship area, such as Boba Fett, Ahsoka Tano, Imperial officers, Gamorrean guards, Ezra Bridger and Sabine Wren. If you have anything worthwhile to offer, you can even barter with jawas, but be forewarned: they’re very picky!

Live shows in the atrium include “Star Wars at Lightspeed,” wherein three energetic performers attempt to re-create the entire original Star Wars trilogy in under twenty minutes. I think there’s a little bit of cheating going on with the timing of the whole thing, but it’s all in good fun and this show had the children in the audience cracking up.

The “Porgs On Board!” Scavenger Hunt is a great way to explore the ship during Star Wars Day at Sea. Each participating guest is issued a Porg mask with an Aurebesh translator and an intriguing puzzle to be deciphered. Those who successfully complete the mission are rewarded with a special character appearance at the end of the day, but I won’t spoil who exactly shows up to thank you for helping with the task.

Another family-friendly performance in the Atrium is called “Celebrate the Saga,” which basically recaps the real-world behind-the-scenes story of the Star Wars franchise so far and explains its worldwide appeal with enthusiastic praise. A different presentation entitled “Star Wars 101” in the Buena Vista Theatre offers a similar breadth of information from a more fan-focused perspective, with the intent of bringing newbies up to speed on the property. There’s also the “Star Wars Day at Sea Costume Celebration,” which gathers all the impressive cosplaying guests to recognize them with applause in the center of the ship.

Watch "Celebrate the Saga" and "Star Wars Day at Sea Costume Celebration" on the Disney Fantasy 2020:

Trivia contests have been a staple of pop-culture fan gatherings for decades, and Star Wars Day at Sea is no exception. Three separate “Star Wars Quote Trivia” competitions and two “Star Wars Superfan Challenge” events pit contestants against each other to claim the title of Person Who Wasted the Most Time Over the Past Four Decades Memorizing Obscure Character Names (I may have won a few of these). There’s also an easier version for kids called the “Padawan Mind Challenge” and the prizes tended to be Star Wars Day at Sea stickers or pins.

The big finale of Star Wars Day at Sea, called “Summon the Force,” is held up on the top decks of the ship. I was incredibly impressed at how long this show is and how many live characters its creators managed to include. Basically every familiar face (or helmet) you may have encountered throughout the day shows up for a climactic celebration of all things Star Wars, featuring clips and music from pretty much every movie and TV series in the franchise. And it all comes to a crescendo with the fabulous fireworks timed perfectly to the memorable melodies of John Williams.

Watch "Summon the Force" full show and fireworks during Star Wars Day at Sea 2020 on the Disney Fantasy:

As you can see, this event is chock full of things to do for Star Wars fans of all ages, and I haven’t even mentioned the Star Wars Day at Sea Drawing Academy, kids’ activities like BB-8 Races and “Jedi Training: Trials of the Temple,” and the festive Galactic Dance Party that follows the “Summon the Force” fireworks. It’s really an ideal day at sea for Star Wars enthusiasts, especially those with families who have embraced Disney’s multifaceted approach to continuing the saga since it purchased Lucasfilm back in 2012. Personally, I had a wonderful time and would consider attending again in the future, if only to defend my title as the ultimate Star Wars Superfan.