Earlier today, I had the pleasure of enjoying lunch at Disney’s Hollywood Studios to take part in the first day of Minnie’s Halloween Dine at the Hollywood and Vine restaurant near Echo Lake in the park. 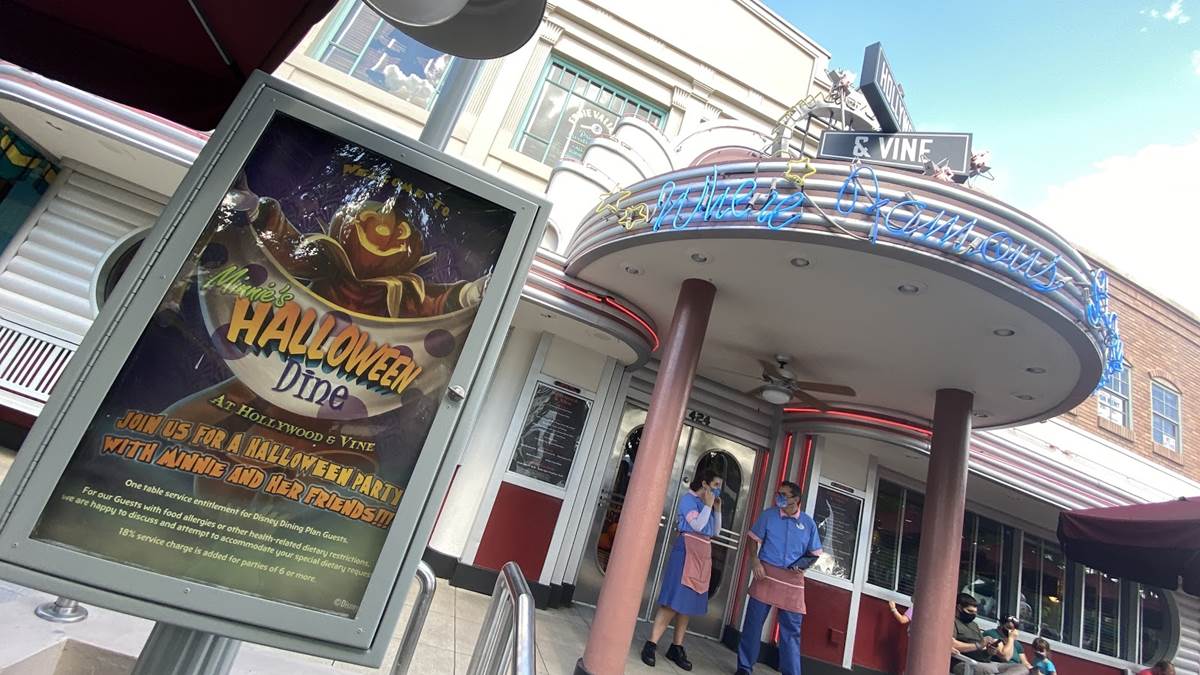 While other restaurants have reintroduced modified character experiences (namely The Garden Grill at EPCOT and Topolino’s Terrace at Disney’s Riviera Resort) this offering marks the return of character dining to Disney’s Hollywood Studios as well as a special Halloween treat for those looking for seasonal fun while at Walt Disney World right now. 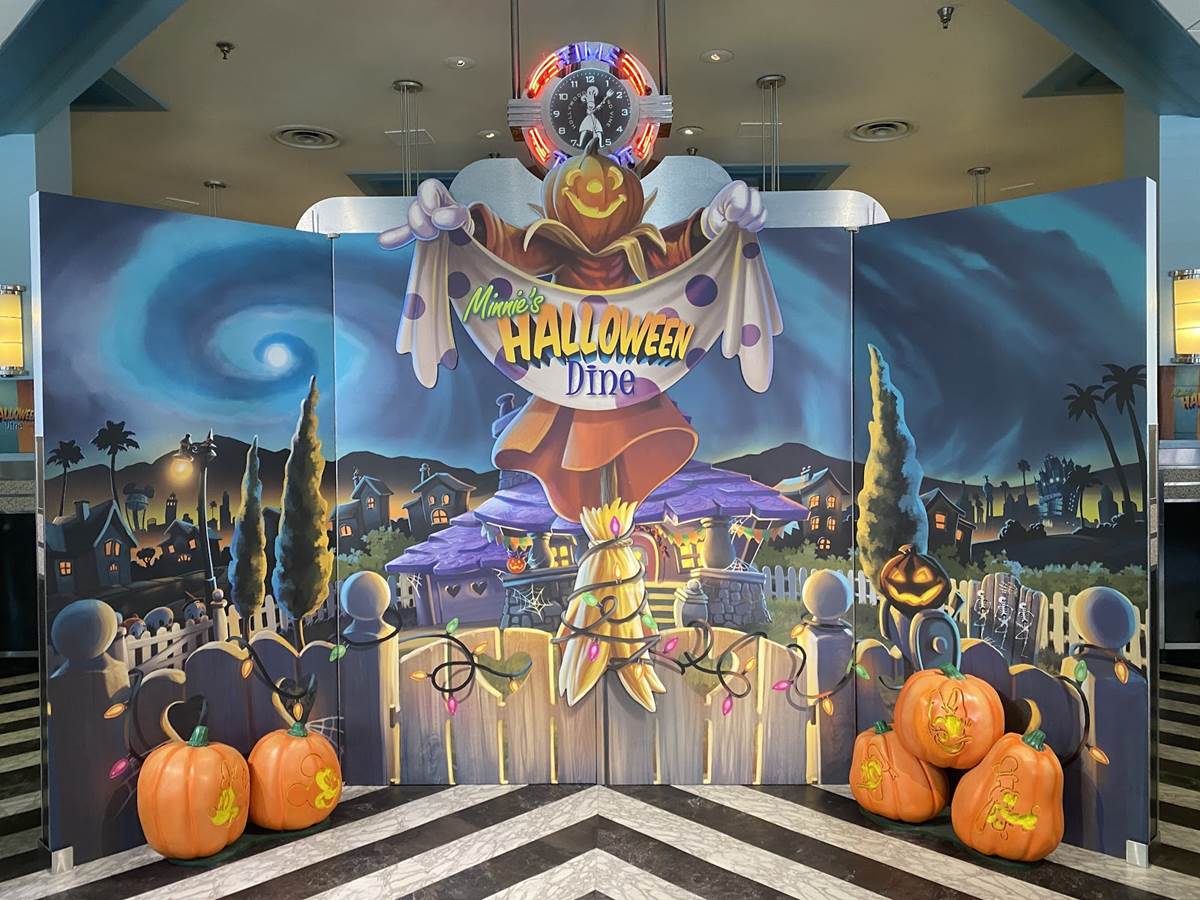 Hollywood and Vine is traditionally a buffet-style restaurant, but because of the modifications necessitated by the world today, the experience now is one flat rate per person for family-style bread and salad, with one entree and one dessert per person. As of press time, guests ages 3-9 can enjoy the meal for $36.00 and Guests 10 and over for $55.00. There are two types of salad to choose from:

Pictured below is the farmhouse tossed salad. 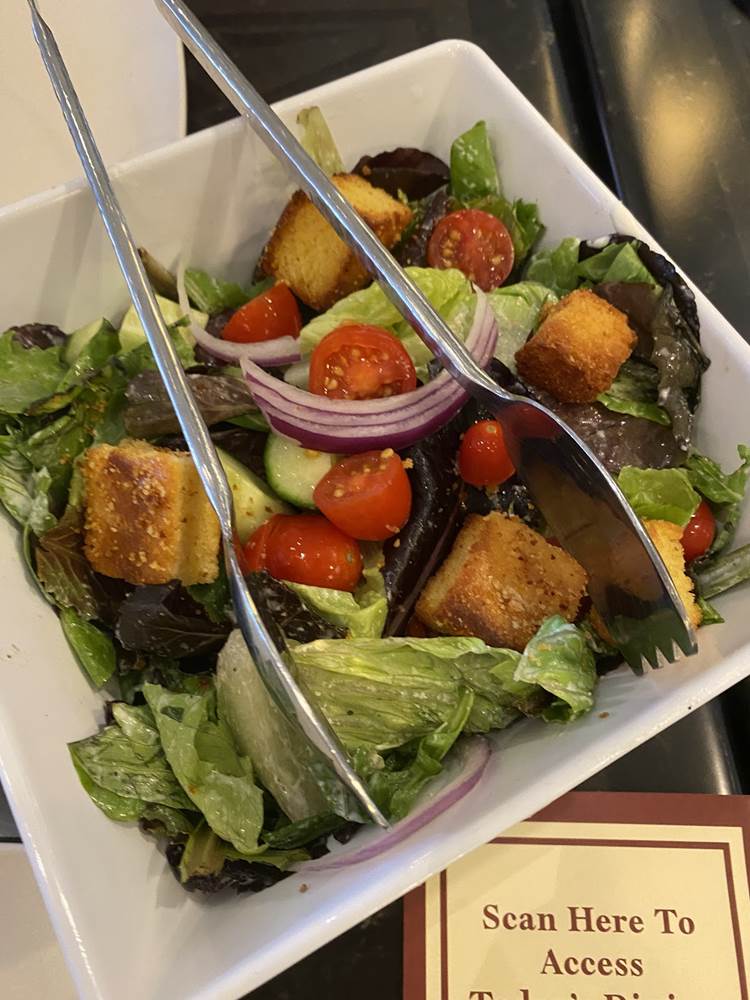 The entrees offered are: 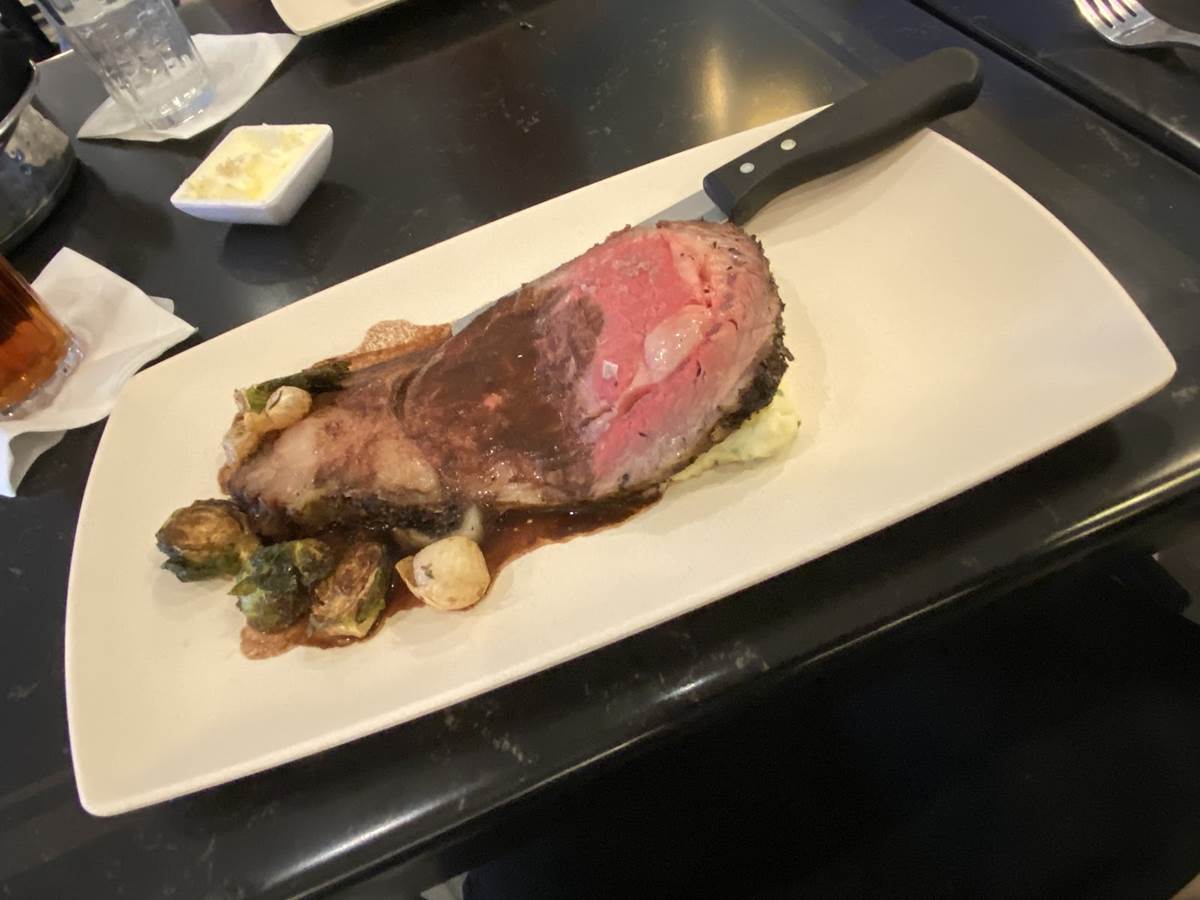 The desserts available are various flavors of “pie.” While it tastes very much like pie, it definitely isn’t what you expect to see when it arrives at the table but is still as delicious. The flavors include: The kids menu selections work a little different, with the same family style bread and salads and they can choose one entree as well as two “selections” which are like sides with the entree, and one dessert.

The kids entrees include: 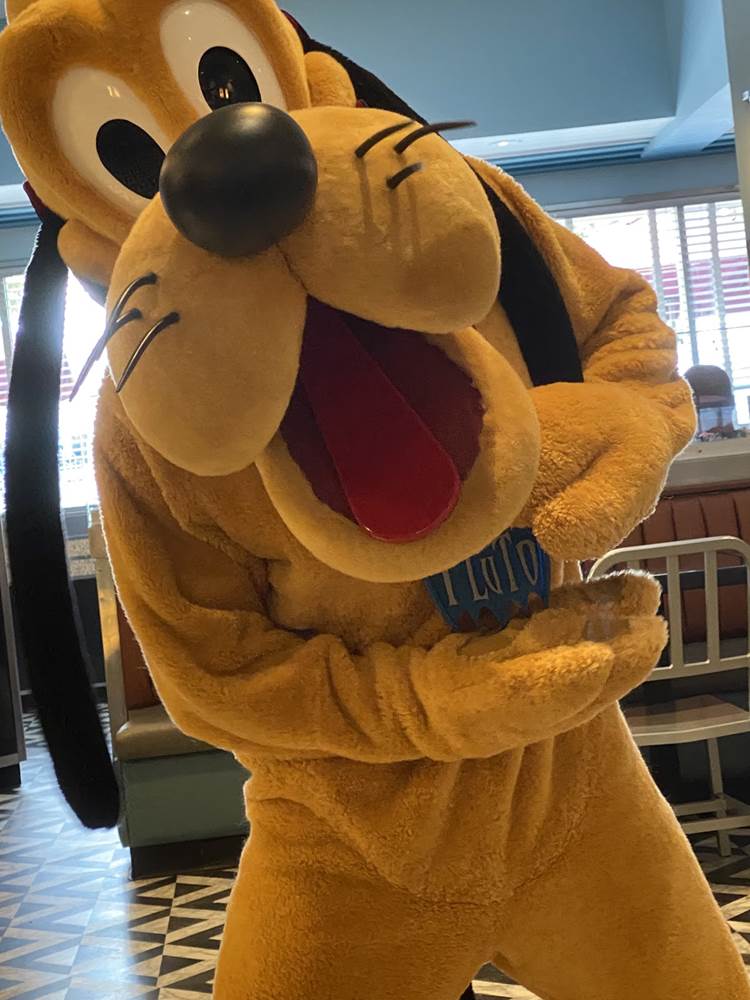 But aside from the delicious food, the main reason we’re heading back to Hollywood and Vine is the return of characters to this restaurant for the seasonal Minnie’s Halloween Dine. This normally bustling buffet has been transformed into more of a traditional table service eatery with ample spacing between tables and parties (seen above) as well as plenty of space on the restaurant floor for the characters to make their rounds. The characters featured are Minnie, Mickey, Pluto, and Goofy each in a festive halloween costume. Pluto’s vampire collar and bat-like name tag were easily our favorite. 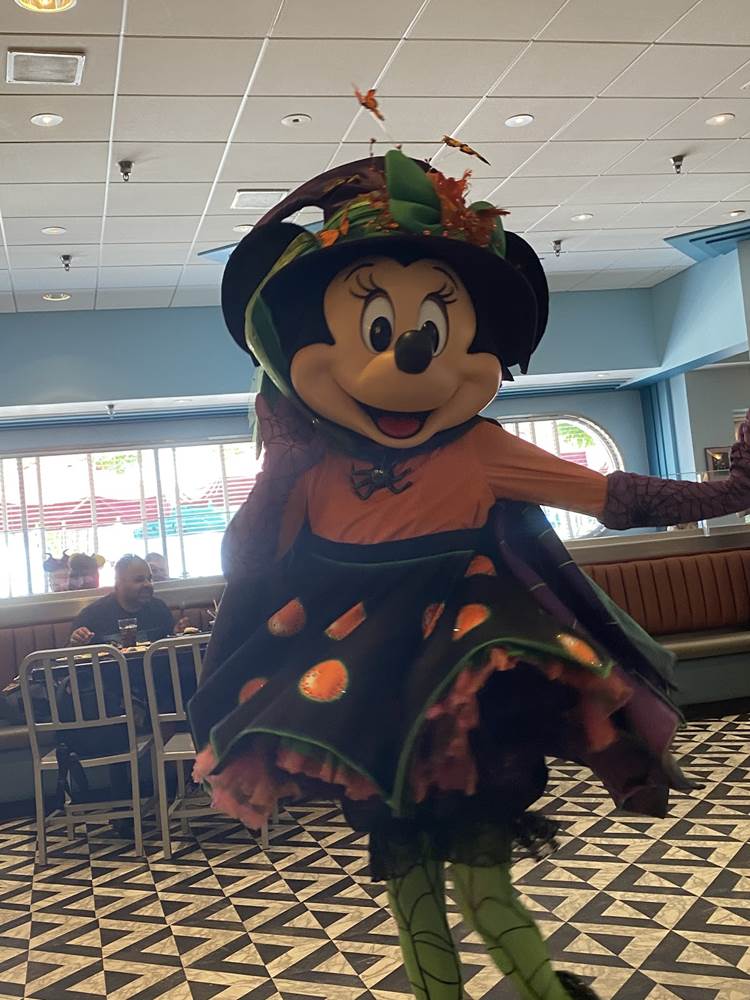 Park guests who are more accustomed to the characters actually approaching each table and greeting patrons for photos will immediately notice the difference to this experience as the characters individually address each party, but do not approach the table. An announcement plays each time characters come out that reminds guests to remain seated when the characters approach, and to take their pictures from afar. The characters are still their lively selves, dancing and parading on the restaurant floor to a playlist that fans of Mickey’s Not-So-Scary Halloween Party might be a little familiar with, but you won’t find more than one character in an area at time. Below you’ll see Minnie closer to our table, with Goofy on the other side of the booths and tables closer to the window. 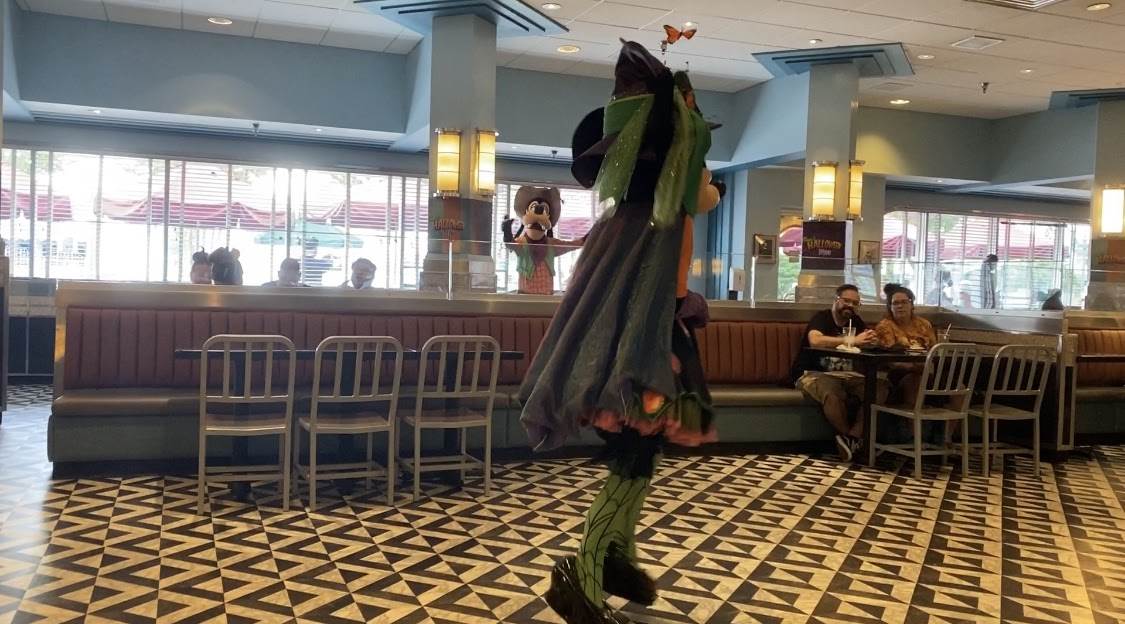 Again, as seen below, characters will be attentive to each party in the restaurant, but they won’t approach the table of guests and will greet everyone from a safe distance.

We are very happy to see some of the more traditional things return, like character dining, if even in this modified format, and Minnie’s Halloween Dine is a fun way to see some of our favorite friends!