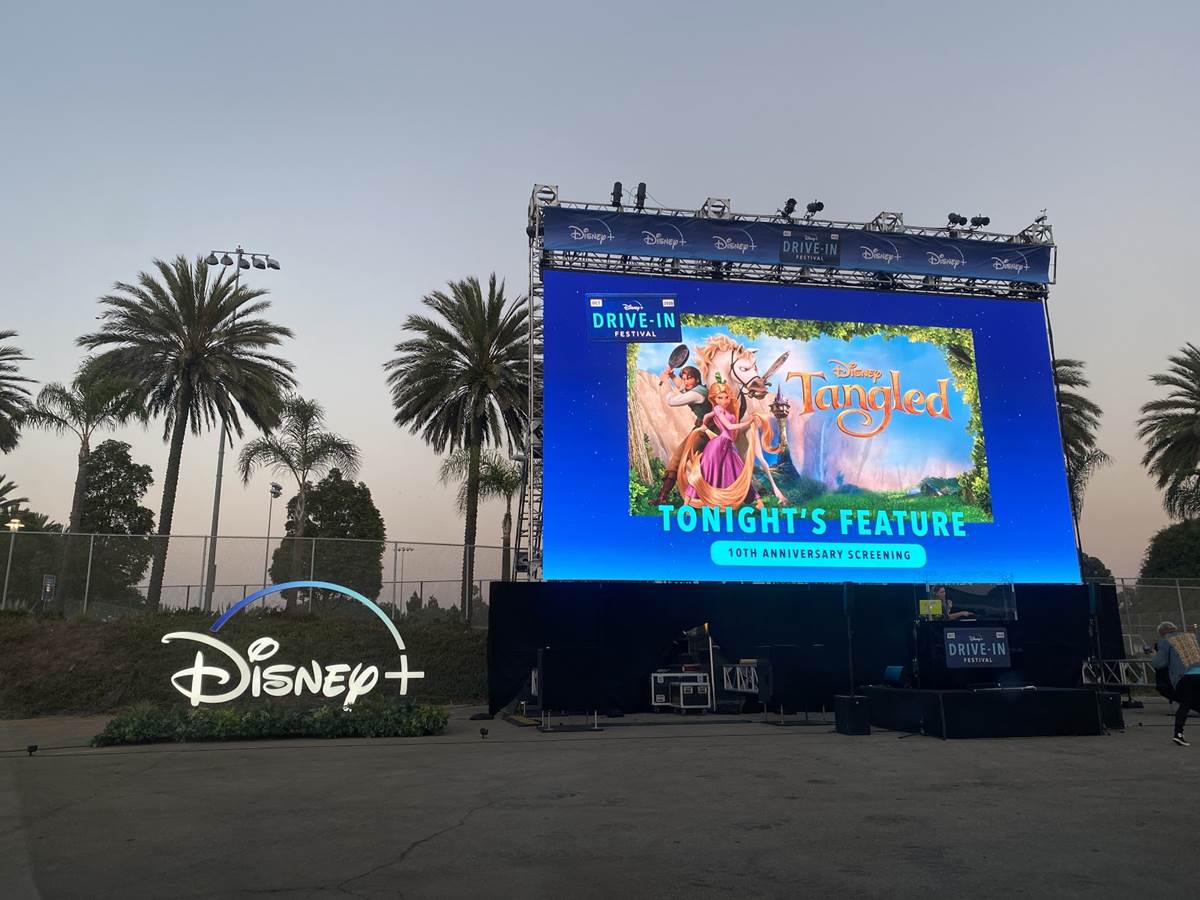 This week, the Disney+ Drive-In Festival launched with the invitation-only red carpet premiere of The Right Stuff, followed by the first scheduled event open to the general public: the 10th anniversary screening of Walt Disney Animation Studios’ 50th feature, Tangled.

Laughing Place was fortunate enough to be invited to attend the Tangled screening as media, so early Tuesday evening we headed over to the Santa Monica airport in Southern California, where the Disney+ Drive-In Festival had been set up in a large parking lot. But first, while on the west side of Los Angeles, we had to make a quick stop at Carvel Ice Cream, where there’s a limited-time Hocus Pocus shake available in celebration of Freeform’s 31 Nights of Halloween.

Upon arriving at the Disney+ Drive-In Festival, we joined a long line of cars waiting to get in. It took us roughly an hour to get through the queue and into the screening area, despite having arrived just minutes after the doors were scheduled to open. Along the way there were ticket check-ins and security checkpoints, as well as signs informing attendees of the festival’s health and safety guidelines.

Another pit stop on the way into the parking lot was a drive-through photo op similar to the one we experienced at last weekend’s Freeform Halloween Road event. Guests pulled up and had their pictures taken in front of a Disney+ Drive-In Festival “step-and-repeat” backdrop, then were able to download their photo off the festival’s website.

We were also handed two complimentary “swag” items on our way in– the first being a concessions box including popcorn, candy, boxed water, and instructions for tuning into the movie’s audio on our car radio.

The second item was a Disney+ Drive-In Festival goodie bag that came complete with Disney+ Mickey ears, a Disney+ roll-up blanket, a Tangled hairbrush, Disney Princess Goldfish crackers, a Beauty and the Beast charm necklace, a copy of the National Geographic-sponsored special edition of USA Today covering the true story being The Right Stuff, and a few other assorted items.

As we pulled into our reserved space near the front of the parking area (again, we are extremely thankful to Disney+ for inviting us to experience this event and giving us the unexpected VIP treatment), slides were being projected on the screen promoting not only the Disney+ Drive-In Festival, but also upcoming Disney+ original content like The Right Stuff and more. Then as 7:00 PM approached, Tangled voice-over stars Mandy Moore and Zachary Levi introduced the film with a five-minute trip down memory lane, recalling their memories of making the now-beloved animated movie.

Obviously we were very spoiled with our spot at the front, but I believe the arrangement of the cars at the event provided most in attendance with a decent enough view, though the further back you got, the smaller that screen was going to look. Also located behind the back row was a set of high-quality port-a-potties for anyone who needed to use the restroom during their visit.

This is the third Disney drive-in movie event we’ve attended during the lockdown (the first two being for opening night of The New Mutants and The Empire Strikes Back’s 40th anniversary) and I have to say, despite the long wait to get in, it was the most comfortable we felt in our car enjoying the presentation. For whatever reason, it seems as though the powers that be behind these events are starting to get the process ironed out, and the Santa Monica location simply felt a little more relaxing than Pasadena’s Rose Bowl stadium, which remains a little too close to the ongoing Bobcat fire for comfort. 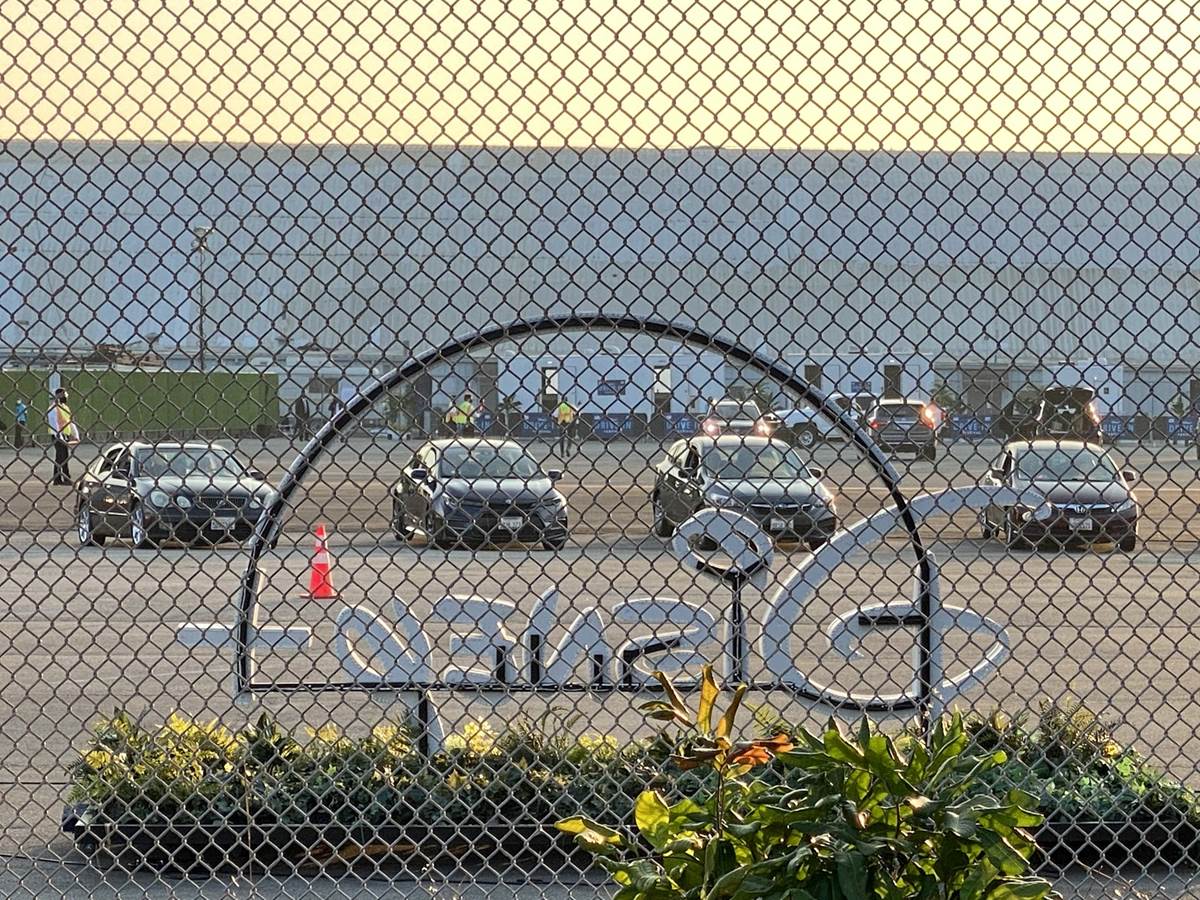 The Disney+ Drive-In Festival continues in Santa Monica through this weekend and concludes with Monday’s red carpet premiere for the Disney+ original movie Clouds. All tickets have been distributed for the remaining events, but for more information you can visit the festival’s official website.