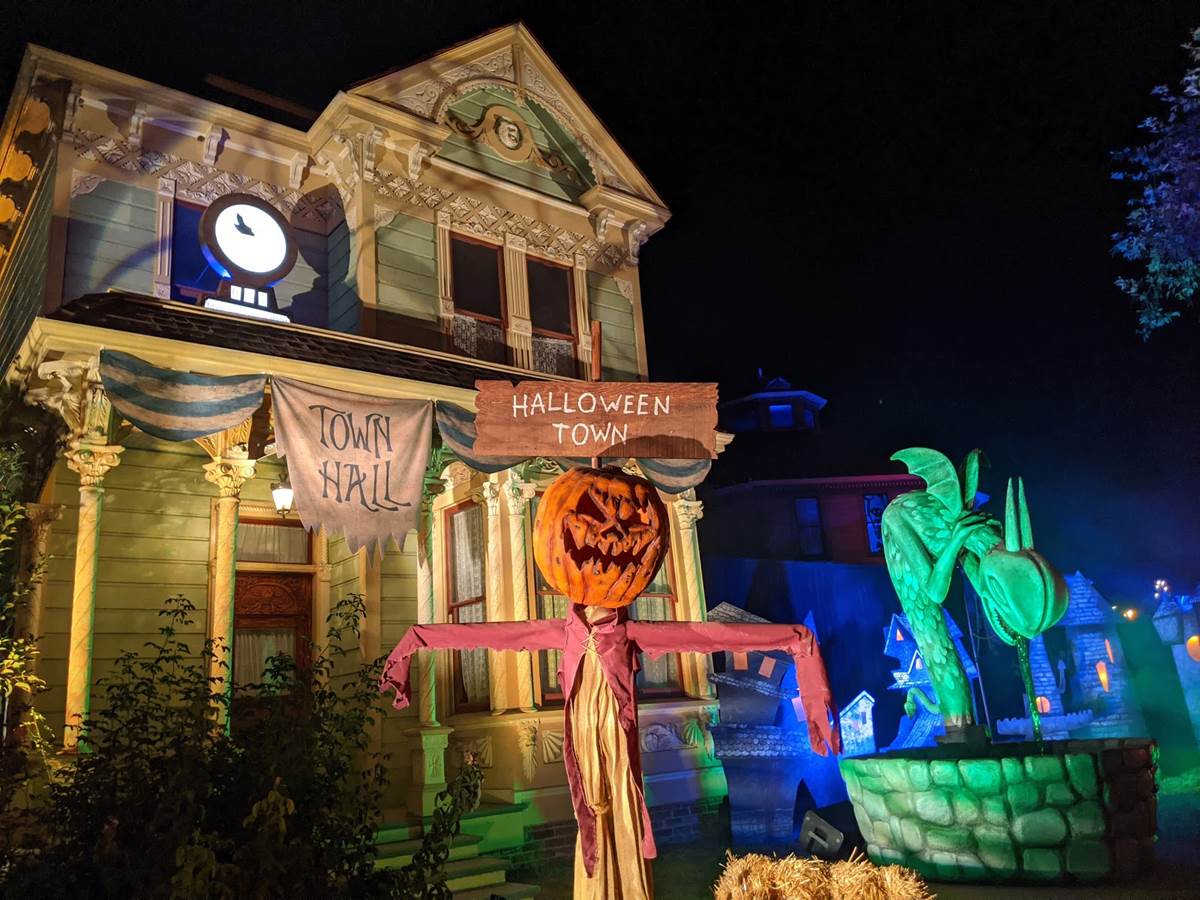 This extremely unusual Halloween season is off to quite an interesting start, with events like Knott’s Taste of Fall-O-Ween bringing Southern California guests some spooky-time delights despite the unfortunate state of current events. And this weekend the basic cable TV channel Freeform (owned by Walt Disney Television) is hosting a very unique take on its annual Freeform Halloween House experience.

Freeform Halloween Road is a rather ingenious drive-through variation on this popular October highlight in Los Angeles, situated at the city’s must-visit Heritage Square Museum, which consists of a row of antique houses rescued from their various original locations before they could be demolished. But for this event, Freeform has transformed these century-old domiciles into atmospheric representations of some of the most recognizable properties set to air during the channel’s month-long “31 Nights of Halloween” programming schedule.

In the above video, I shot some highlights of Freeform Halloween Road as we drove through the experience and enjoyed the impressively decorated buildings, eye-catching themed areas, and memorable character moments.

The first part of the tour served as the entrance and check-in area, where jack o’lanterns, Jack Skellington heads, humorous warning signs, and giant eyeballs were all on display. Then we entered into the main attraction via the nexus of holiday trees from Tim Burton’s The Nightmare Before Christmas.

Along the trail, cars were encouraged to stop at several trick-or-treat spots, where an extending claw would come out of a scary tree or hissing snake’s mouth to drop candy in the sack provided. Also in the bag were goodies like a Hocus Pocus hoodie, a Ghostbusters: Afterlife mini-poster, a Gomez Addams Pop! Vinyl figure, a Freeform Halloween Road bandana, and more fun trinkets.

Plus, at two points in the experience, our car came to a stop in front of a photo op backdrop– one simply displaying step-and-repeat logos for Freeform Halloween Road, and one that served as a green-screen to place the car atop the curled mountain from The Nightmare Before Christmas. Pretty cool!

The first of the three main themed areas was indeed dedicated to The Nightmare Before Christmas, with a creepy graveyard, the Halloweentown Town Hall, silhouettes of the movie’s many characters, and of course plenty of jack o’lantern decking a white picket fence. At Oogie Boogie’s lair, employees spun a “Wheel of Misfortune” to deliver guests either a trick, a treat, or– for those who are unusually lucky– “Oogie’s Prize.” Our spin landed on “trick,” so we got gooey, squeezable skeleton and brain toys.

Next up was Hocus Pocus, where the Sanderson sisters entertained us with their rendition of “I Put a Spell On You,” but not before Winifred could welcome us to her haunted abode.

The last major setpiece belonged to Ghostbusters, which obviously isn’t a Disney movie, but will be playing on Freeform this Halloween season. It was great seeing a pretty authentic-looking ECTO-1 (not sure if this was on loan from Sony or simply a cool-looking replica) and a giant inflatable Stay-Puft Marshmallow Man threatening the nearby architectural treasures. Luckily four mannequins depicting the Ghostbusters themselves were on hand to save the day.

There were a few other quick nods to “31 Nights of Halloween” programming like The Addams Family along the route, and we always found something interesting and colorful to look at from the time we entered until we reached the exit. I would recommend registering to check out the very clever Freeform Halloween Road yourself, but the three-day event is already completely sold out. Still, I hope you enjoyed our photo and video tour through this one-of-a-kind experience in Los Angeles, California. 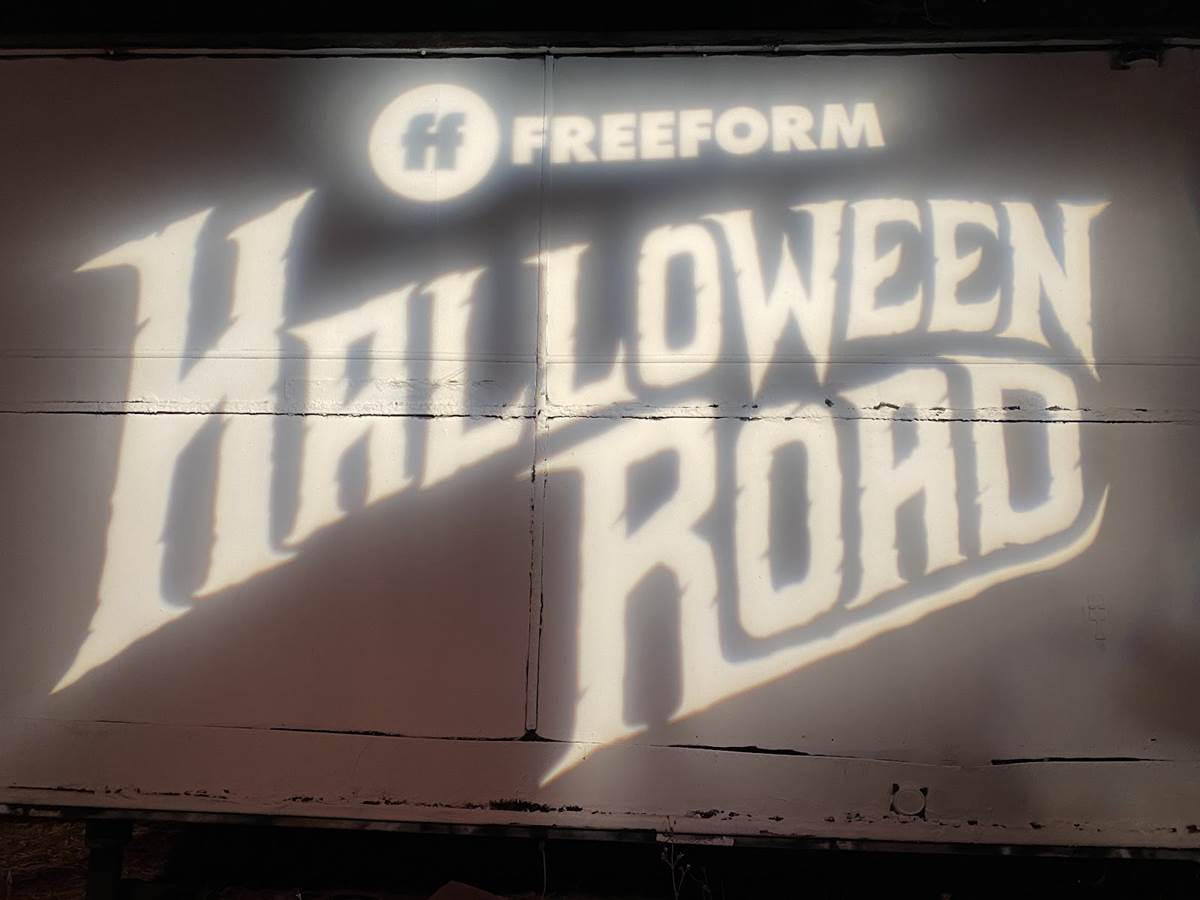 “31 Nights of Halloween” runs from now through Saturday, October 31 on Freeform. For more information and a full schedule of airings, be sure to visit the channel’s official website.