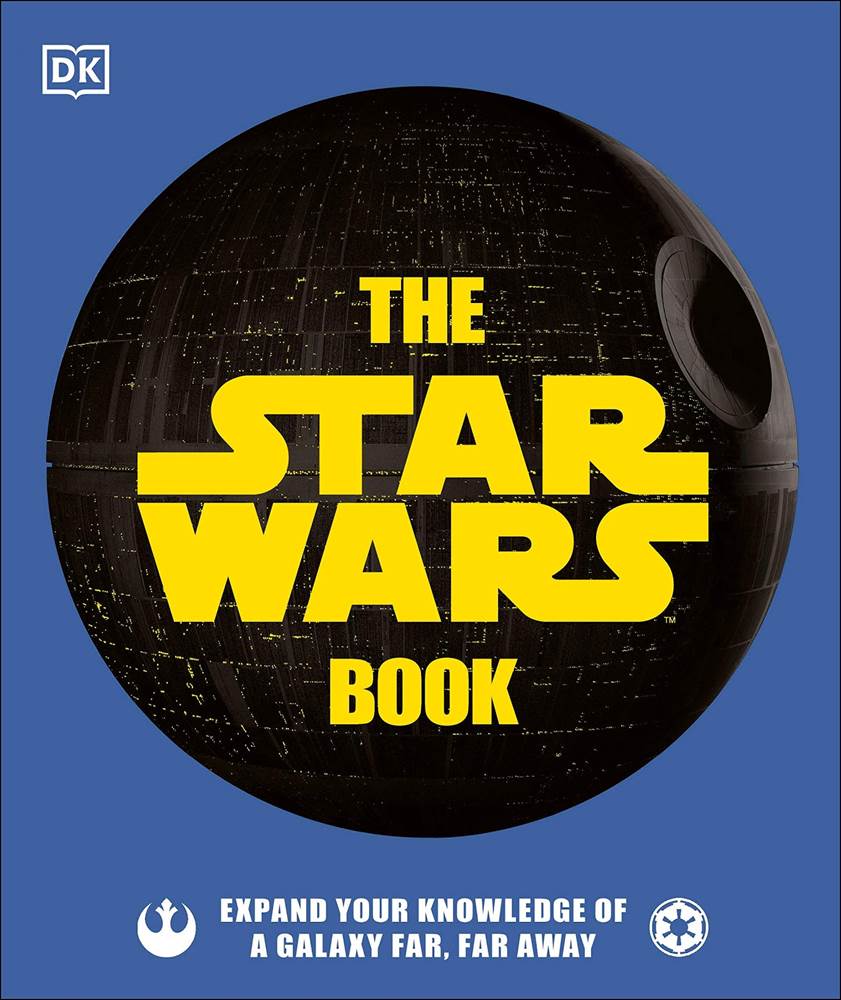 Even after the voluminous Star Wars Expanded Universe was relegated to its now non-canonical Legends status after Disney’s purchase of Lucasfilm in 2012, the ever-widening tapestry of storytelling that is George Lucas’s sci-fi / fantasy saga still takes up a lot of space, both literally and figuratively. Star Wars’ current canon is an ongoing narrative that spans twelve theatrically released feature films, at least four multi-season television series, dozens of long-running comic book titles and miniseries, countless novels, numerous video games and VR experiences, and some major theme park areas, so of course it needs someone to keep track of its many storytelling intricacies.

That’s why so many Star Wars reference books exist, and it’s also why DK’s new The Star Wars Book has been published at this particular point in time– in the wake of the conclusion of the so-called Skywalker Saga and just as Lucasfilm is set to embark on an exciting new era in A Galaxy Far, Far Away. The Star Wars Book, assembled by franchise mainstays Pablo Hidalgo (author of a number of Star Wars visual dictionaries, as well as a member of the esteemed Lucasfilm Story Group), Dan Zehr (host of the Coffee with Kenobi podcast and contributor to StarWars.com), and Cole Horton (author or co-author of several Star Wars reference books including the recent Star Wars: Book of Lists and Star Wars: Galaxy’s Edge – Traveler’s Guide to Batuu) is essentially Wookieepedia in hard-bound form: a fairly exhaustive collection of entries detailing most of the major players, events, governments, and technology at play in the Star Wars universe across its many existing media. And the best thing about this guide is that it uses all of those media as sources– it’s not just restricted to talking about the events that occur in the widely seen films. We get content from the comics, novels, and video games (there’s even a few nods to the content created for Disney Parks) referenced frequently here as well, all treated as equally important parts of the Star Wars patchwork. It fills in the gaps for those who don’t have the time and/or interest to devote to consuming everything and everything that comes out of Lucasfilm and its subsidiaries, while also encouraging those who are intrigued to go seek out the stories they may have missed along the way. 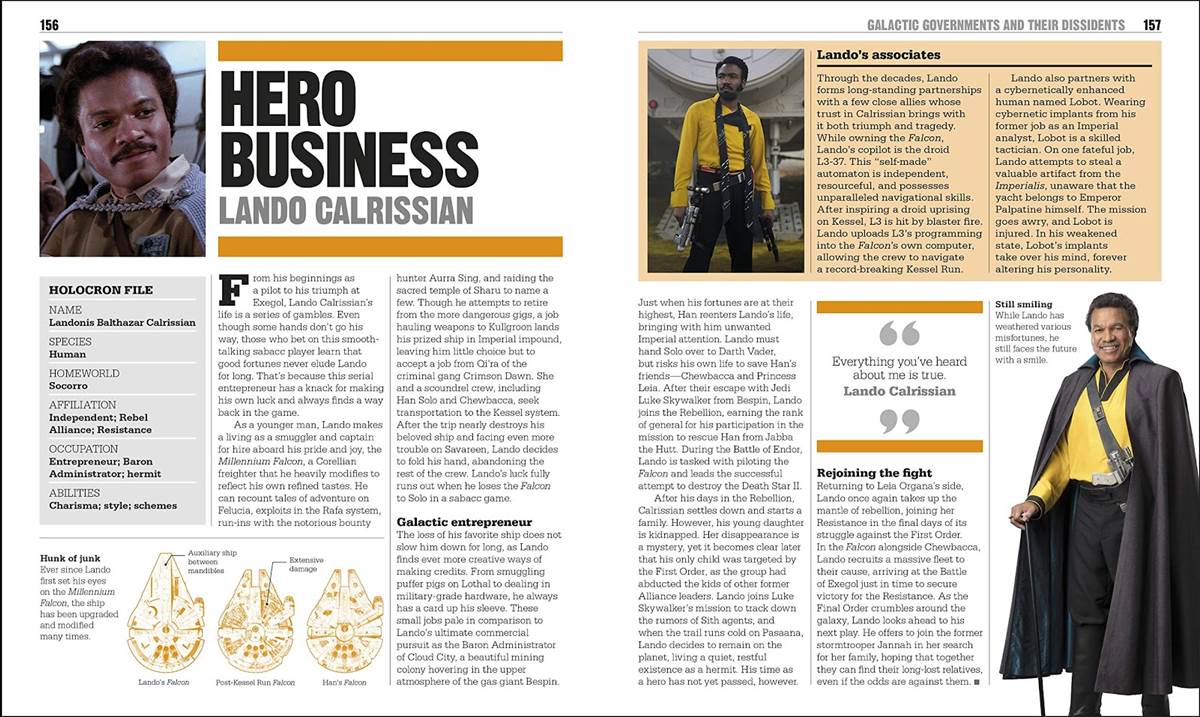 The only major problem with The Star Wars Book arises when one tries to read it cover-to-cover, as I found out the hard way after receiving my review copy in the mail. I got about halfway through before realizing that the book is not at all meant to be inhaled in that way, which makes it tougher to write about, but which also forced me to approach it from a different perspective. In fact, I almost kind of regret reading the first half in the way I did, which made the text feel incredibly repetitive in its somewhat dry retellings of each major character’s biographies, one at a time. That method gives the reader the same information over and over again, with a slightly different focus each time. Instead, what I would recommend for those who pick up this title is to choose topics that you’re not overly familiar with, read through those, and then move on to the smaller details and interesting timelines scattered throughout. This volume is meant to be used as literal reference material for those who need to check a quick fact or refresh their memory about the sequence of certain events. For that reason, there’s a handy index in the very back and a glossary of terms defining some of the more obscure objects and phrases in case you come across something with which you’re less than familiar. Skim through this book, stop when something jumps out at you, and return to it whenever you feel the need to learn more. 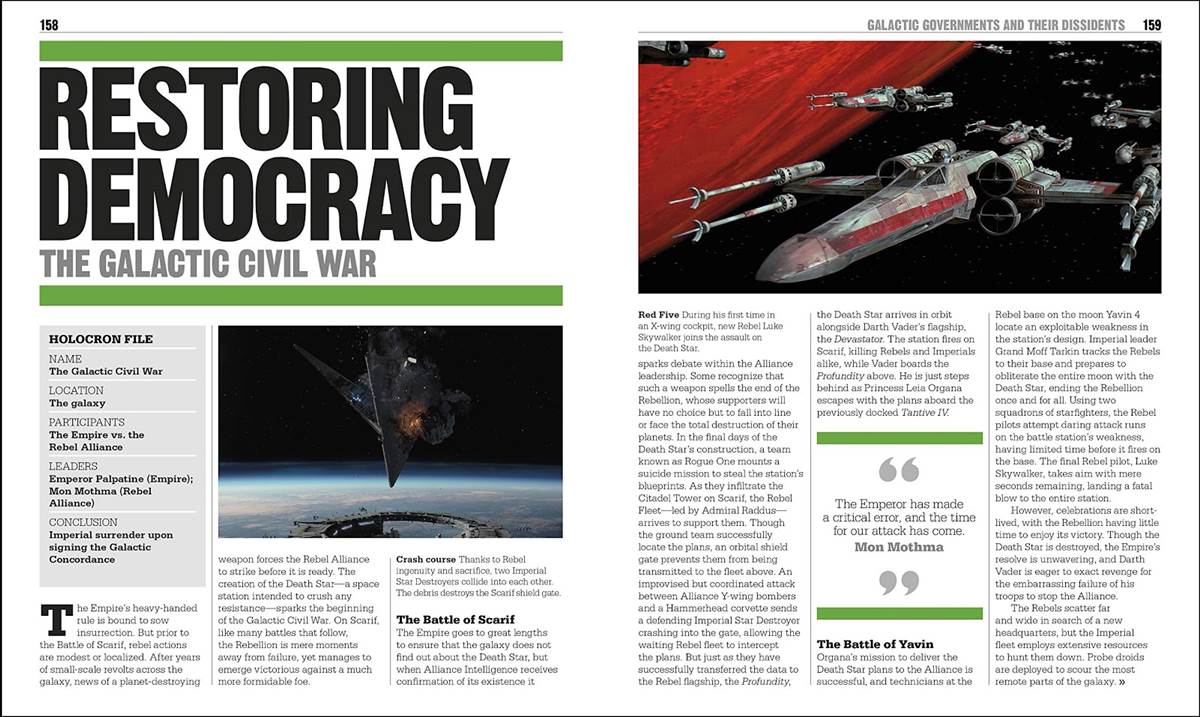 Most Star Wars fans are intimately familiar with the story of Anakin Skywalker’s rise and fall, and how Emperor Sheev Palpatine AKA Darth Sidious pulled the strings of both the Galactic Republic and the Separatist Alliance to engineer his own ascent to dictatorship. Those details are all contained within the pages of The Star Wars Book, often reiterated again and again in the context of whatever subject happens to be at hand– always accompanied by attractive and high-quality still images pulled directly from the original sources. But the real value of this publication is the wealth of details that may have otherwise fallen through the cracks for those not paying intimate attention to all of this franchise’s ins and outs. Across multiple sections broken up with subheadings like “The Galaxy,” “Science and Technology,” “The Force,” and “The Skywalkers,” Hidalgo, Zehr, and Horton have corralled a daunting amount of knowledge in this single volume. And again, I don’t recommend reading it straight through, but instead using it as a sure-to-be-invaluable resource as we approach new Star Wars materials like the second season of The Mandalorian, the upcoming Rogue One spinoff series, and next year’s multi-platform publishing initiative The High Republic. Any questions you may encounter about the established background and intricate lore of this continuing saga are almost certain to be answered within these pages, and I can’t think of a better team to have done the work putting it all together. 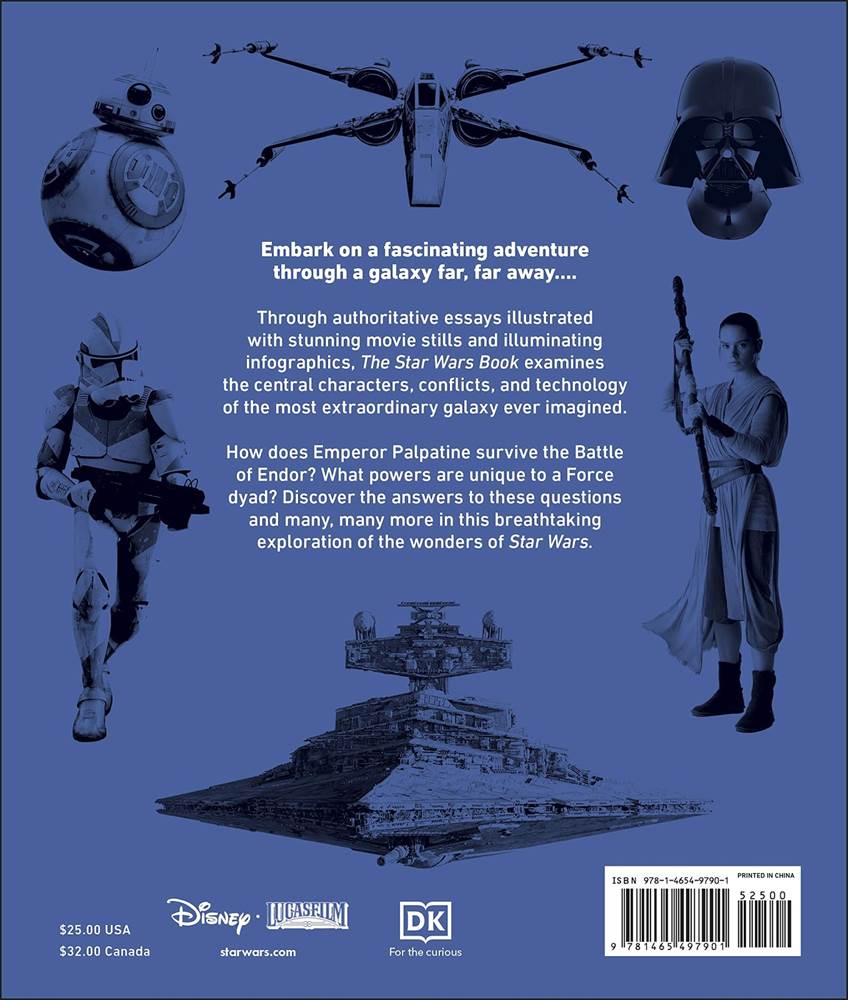 The Star Wars Book is available now wherever books are sold.