Over the weekend I had the pleasure of attending two virtual events at The Walt Disney Family Museum (WDFM) featuring the kindhearted and talented Ashley Eckstein. To start off the day, WDFM hosted a virtual storytime where Ashley read her Little Golden Book I Am a Padawan and then answered questions about being an author, actress, and Ahsoka Tano. Later in the afternoon, Ashley was joined by her friend and fellow voice actor Bret Iwan for a conversation about her career and creating Her Universe. 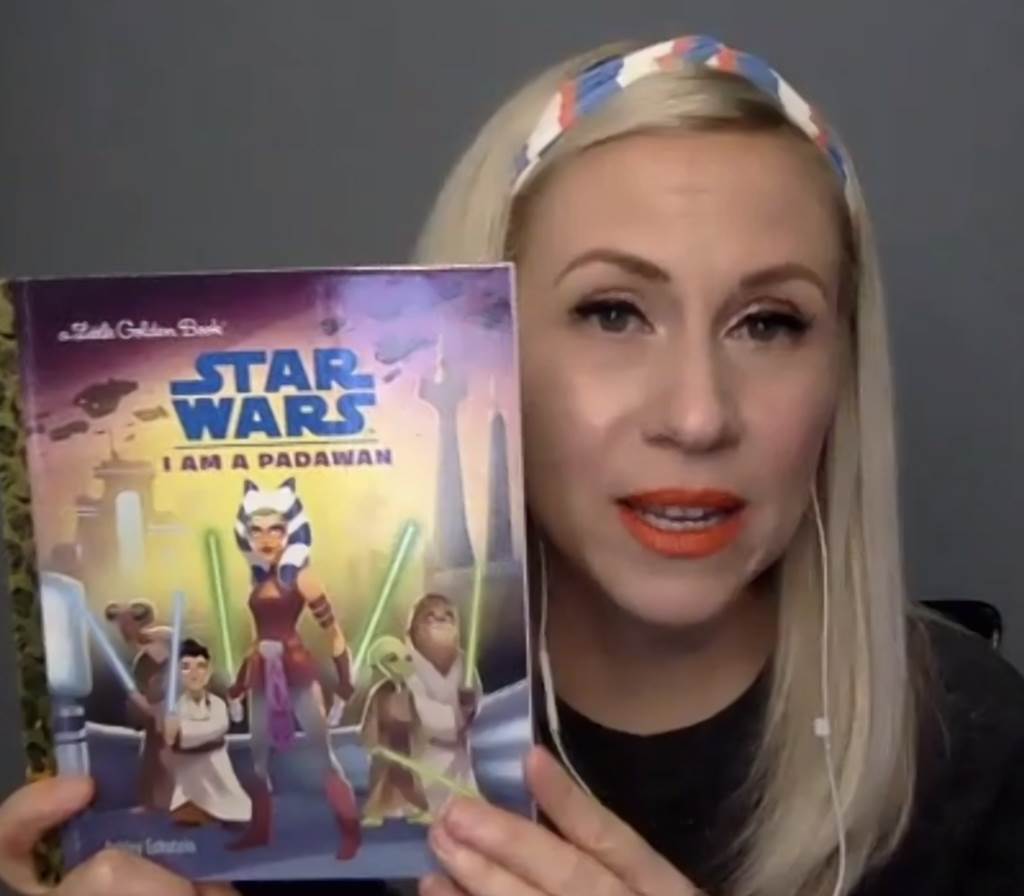 Even if you’re not familiar with her name, you’re probably familiar with her work. Ashley is most recognized as the voice of Ahsoka Tano in the animated series Star Wars: The Clone Wars, and Star Wars: Rebels. She’s also guest starred on two Disney Channel shows, That’s So Raven and Phil of the Future. In addition to acting Ashley is the founder and CEO of fashion company Her Universe and its division Our Universe, and has written two books, I Am a Padawan and It’s Your Universe: You Have the Power to Make it Happen. Virtual Storytime: I Am a Padawan with Author Ashley Eckstein

This first event was a 45 minute session geared toward younger audiences with a reading of the story followed by a Q&A. Host Caitlin Manocchio of WDFM introduced Ashley who briefly spoke about writing the book before she started storytime. She explained to the audience that when she was younger she was told she could only be one thing, so she decided to be an actress. She didn’t think that she couldn’t be an author too. But over time, she learned that she could be many things and could pursue all the passions that interested her. Ashley also talked about how she learned to ask for help as well as break down her writing process into small steps, which helped her become more confident. When she was approached to write a story for Little Golden Book’s I Am Series, she immediately said yes. Ashley grew up with Little Golden Books and they even helped her learn to read. Ashley said the lessons in this series, including this book, are ones that are important for us to learn even today. 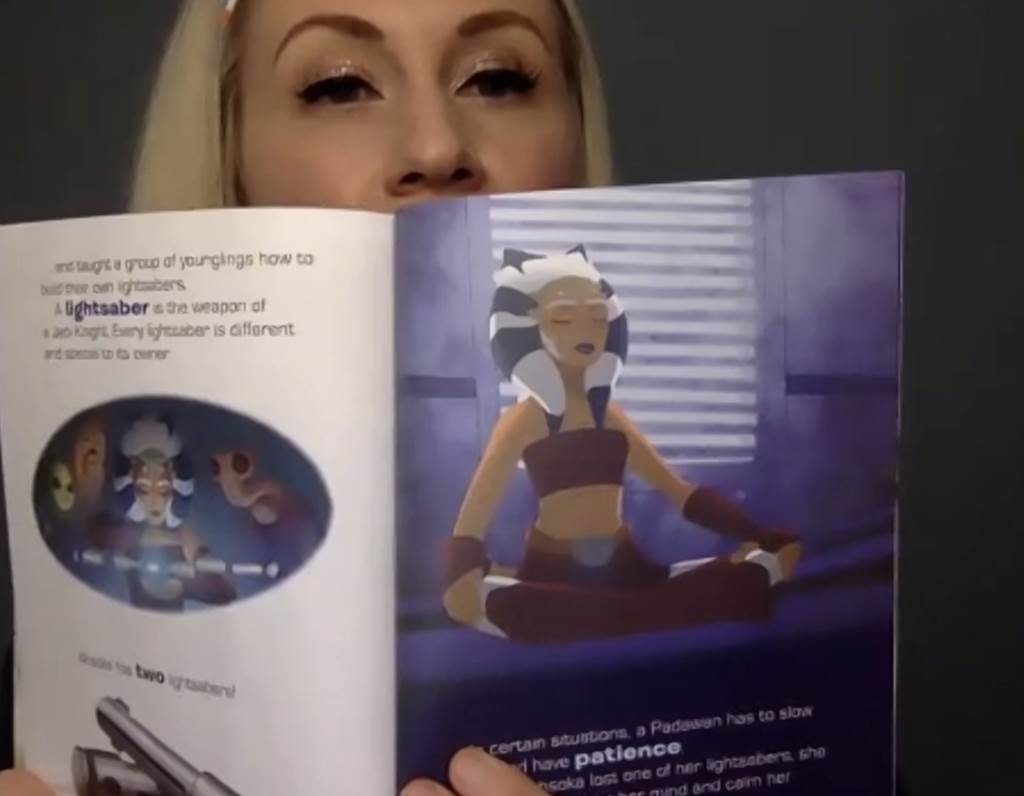 The storytime lasted 7 minutes. I Am a Padawan covered important moments in Ahsoka’s journey with the Force and the Jedi through the first five seasons of The Clone Wars. On each page, important words were bolded in black or bright colors and throughout the story, Ahsoka learns about being friends with people who are different from you, the importance of calming your mind in stressful situations, and following your own path. Then it was time for audience questions and one of the first things fans wanted to know was does Ashley plan on writing more books? Yes! She does have a book project in the works and this is something she’ll author herself. She didn’t hit at age group or genre, but she did seem very excited to expand her skills as an author. As for other future plans, she has some animation and audio projects lined up that she says will feature new characters and stories. 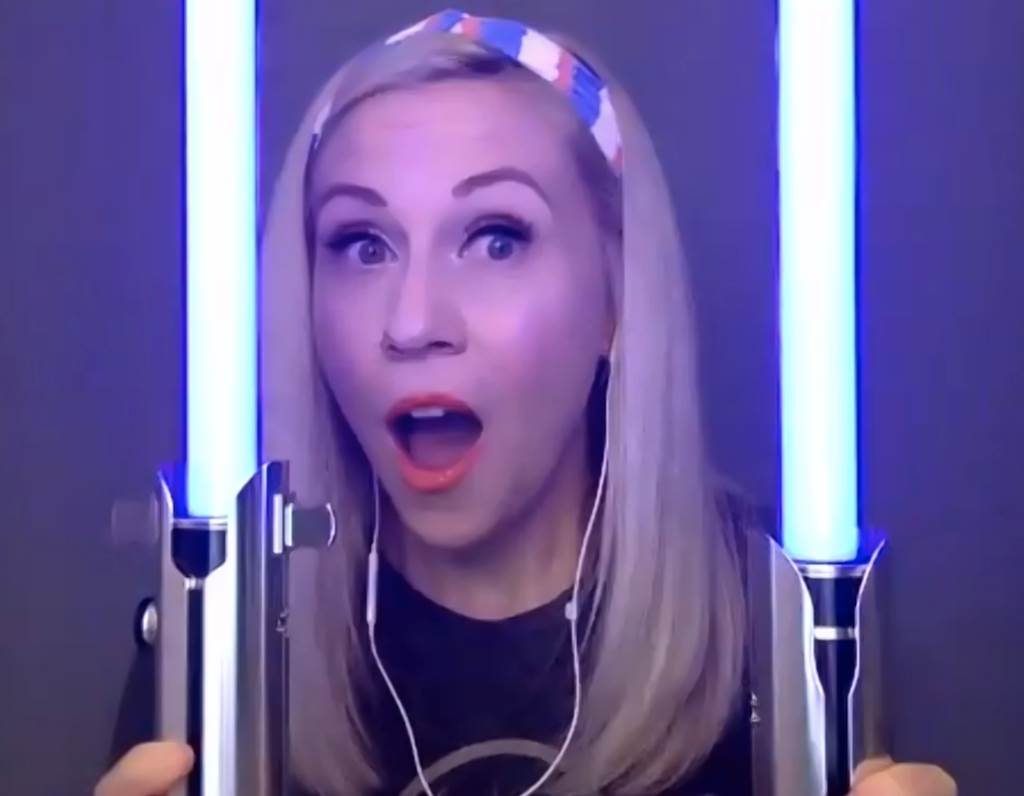 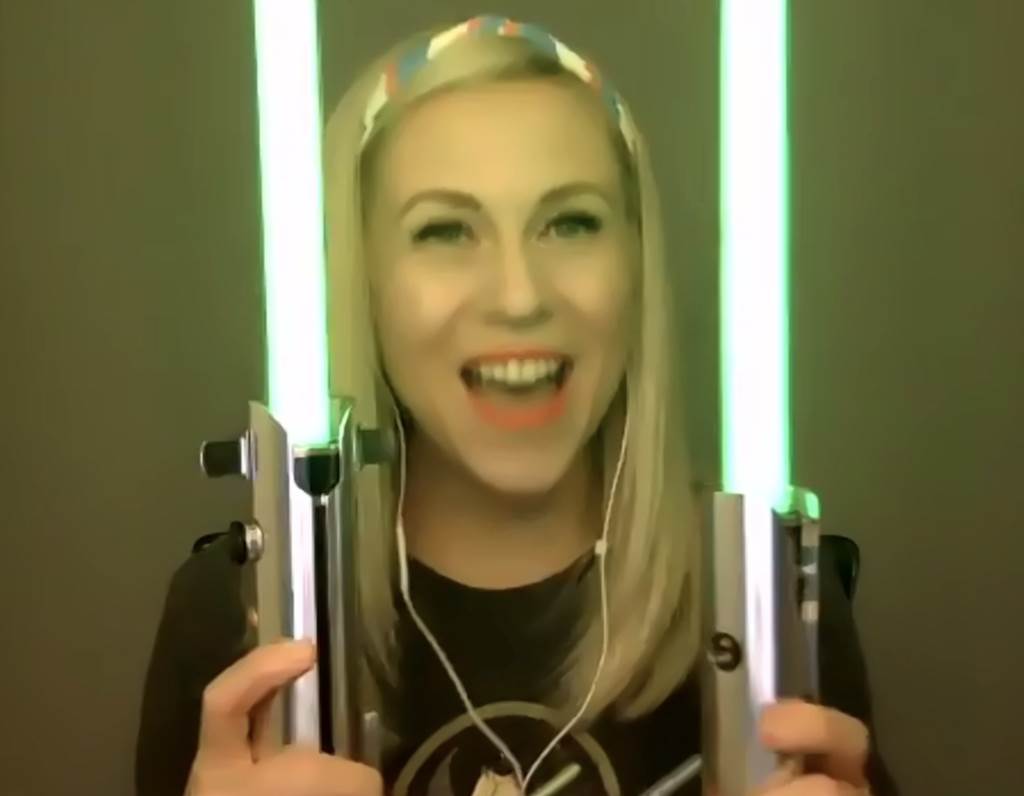 With young fans in the audience, Ashley took a few moments to show off Ahsoka’s twin Legacy Lightsabers that magically change color from blue to green and make noise when moved. A fan asked if she made these at Galaxy’s Edge, which she did not, instead the saber she made at Savi’s Workshop relied on the Elemental Nature part of the Force. Ashley said lightsabers make her happy and her favorite color blade is white. It was explained to her that the white is neutral and she feels that represents Ahsoka. Ahsoka will do what’s right no matter what. She’ll be kind to everyone.

Finally, someone asked her to describe Ahsoka in three words. Ashley said: Kind, Light —she’s a bright light everywhere she goes, light side of the Force—and Hope. She encouraged guests to apply Ahsoka’s lessons to daily life. 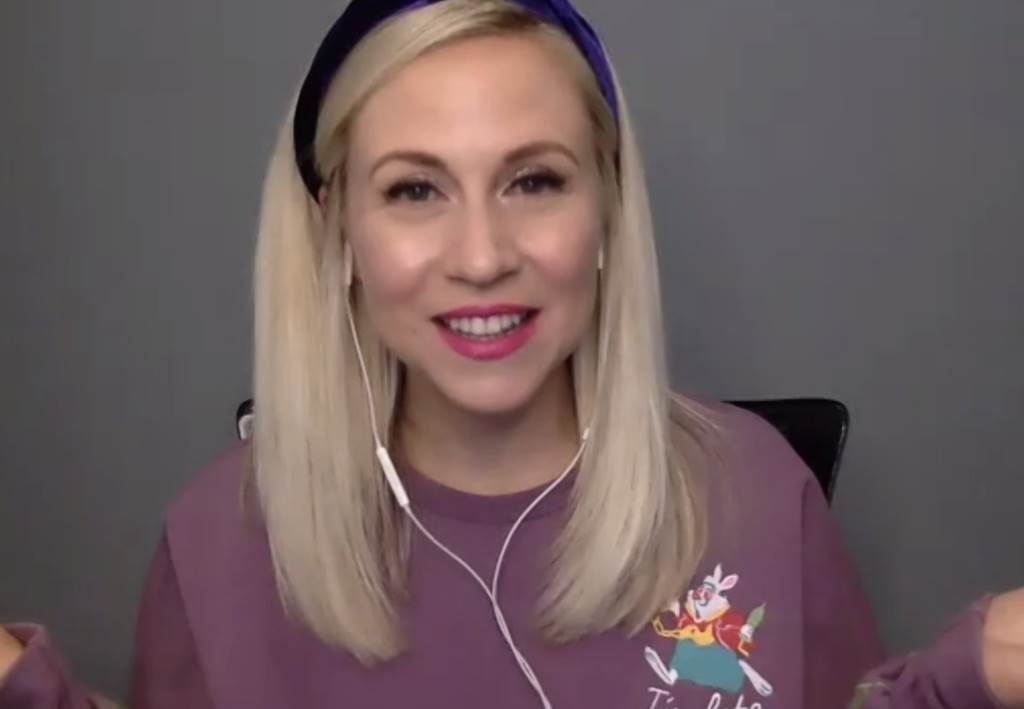 Building an Empire: Creating Her Universe with Ashley Eckstein and Bret Iwan

In the afternoon, Ashley returned to WDFM with one of her good friends Bret Iwan, who also happens to be the official voice of Mickey Mouse! The duo guided the audience through Ashley’s career in a fun presentation “Curating Your Dreams” that was themed to Alice in Wonderland. Alice is Ashley’s favorite character and someone who has a similar personality. Alice is often off in her own world, and she’s curious about everything around her, and Ashely says she can really relate.

Growing up, Ashely wanted to pursue many different dreams. Thanks to the support of her parents was able to have her Karate Kid phase, play baseball—sometimes as the only girl on the team—, pursue acting, and even design her own dress for a beauty pageant. She enjoyed all of these experiences and wanted to be many different things. However, in high school, as she was thinking about college, a teacher told her she had to focus on just one thing. So she put all of her other dreams aside and chose the thing she was most passionate about, acting.

Ashley made the move to Los Angeles to start her acting career. She’d always dreamed about being on the Disney Channel and was eventually cast in the recurring role of Muffy on That’s So Raven. She also began auditioning for voice over roles which was challenging. Her background was in live-action and she was turned down hundreds of times. In time, it turned out there was a role she was perfect for: Ahsoka Tano in The Clone Wars.

In the middle of living out her acting dreams, her husband—Major League Baseball’s Dave Eckstein—was traded from Anaheim to Toronto and she went with him, essentially giving up her acting career in LA. Now that her acting life was on hold (aside from Ahsoka), she felt she didn’t know who she was anymore. So she asked herself some important questions and then focused on what she did have. She determined that she had the power to choose how things were going to affect her. So with just a laptop, a cell phone, and a dream, Ashley created a plan that would turn into a full blown fashion company, Her Universe.

With her Star Wars role as springboard, Ashley took a look at the female side of the fandom and learned that a decent percentage of women were buying consumer products, but there were very few clothing options designed for them. Beyond that, she was shocked to learn that women and girls were being bullied for liking the franchise. This led her to stand up against bullying and become an advocate for mental health.

Today, she proudly knows herself to be an Actress, Advocate, Author, Fashion Designer, and Ahsoka Tano. She encouraged fans to ask themselves the same questions and, as in the morning session, reminded them that they don’t have to be just one thing, they can pursue all of their dreams. However, with this event geared toward an older audience, Ashley noted that you can’t do everything 100% all of the time. Her advice is to determine what to focus on each day and be 100% that thing or 50% of two things. 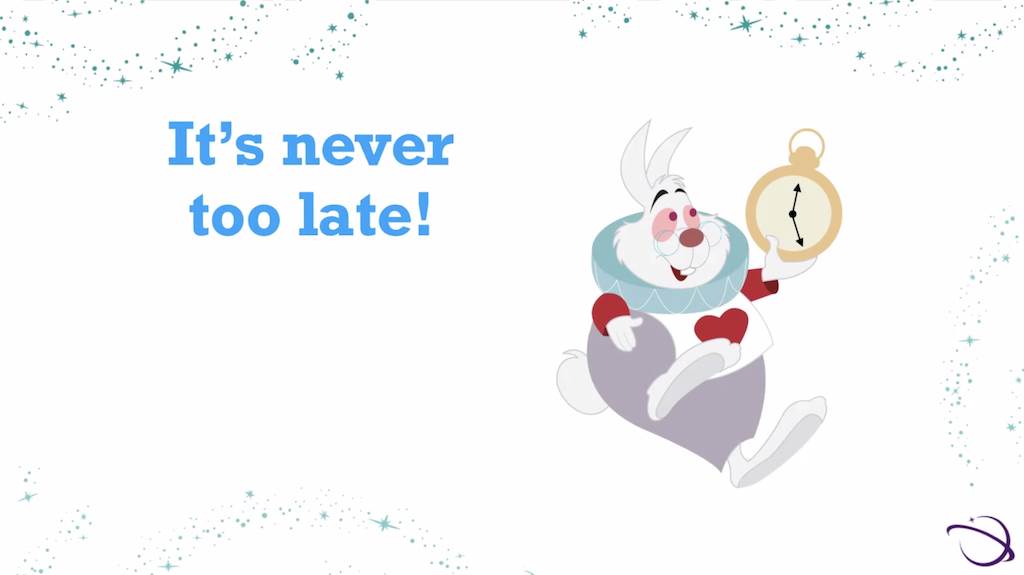 Ashley also spoke of the importance of taking time off and unplugging. She said it's easy to get caught up thinking that in order to be successful you have to work constantly. For her, that led to burnout and wasn’t good for her mental health, and she had to learn to schedule downtime or a day off.

After the presentation she and Bret answered questions from the audience. One of the best questions was about following your dreams when you have unique challenges or don’t have a great support system. Both Ashely and Bret talked about shifting your mindset to focus on what is available to you, and what you can do with that. Additionally, they said “you are your biggest ally/advocate.” If you believe in yourself and your passions, that will draw others in. Don’t underestimate your own power.

There’s really no better way to spend your weekend than with the voices of Ahsoka Tano and Mickey Mouse! Ashley and Bret brought a positive energy to their presentation and I appreciated how genuine they were. I truly enjoyed both Walt Disney Family Museum virtual events and found them to be fun and informative.