The Alien franchise’s history in comic books goes all the way back to the first movie’s debut in 1979, when it was adapted by Heavy Metal magazine under the acclaimed creative team of Archie Goodwin and Walt Simonson (both of whom had contributed to Marvel’s early Star Wars efforts). Then for over three decades (starting after the 1986 sequel Aliens) Dark Horse Comics had the license and put it to prolific use, publishing dozens of miniseries, ongoing titles, and stories tied in with the fictional universe first established by screenwriter Dan O’Bannon and director Ridley Scott.

Cut to 2019, when Disney purchased the holdings of 21st Century Fox. Along with that media corporation’s vast collection of intellectual properties came the rights to the Alien franchise, which meant Dark Horse’s longtime relationship with Alien would soon be allowed to lapse and revert to the also-Disney-owned Marvel Comics. This week saw the release of the first fruit of that particular acquisition, Marvel’s Alien #1, which launches a new ongoing series that once again takes place after the events of Aliens. Written by Phillip Kennedy Johnson (Marvel Zombies: Resurrection, DC’s The Last God) and illustrated by Salvador Larroca (Star Wars, Doctor Doom), this Alien comic follows a retiring Weyland-Yutani security chief named Gabriel Cruz, who is still in therapy due to an encounter with the Xenomorph species on a mission years earlier. His counselor in these sessions happens to be a different copy of the Bishop android played by actor Lance Henriksen in Aliens and Alien3, so it’s nice to have that comfortingly familiar (and thankfully benevolent, compared to Ian Holm’s Ash from the original Alien film) face around to help orient readers at the top of this fresh start. Cruz is haunted by his squadmates’ gruesome deaths, but he’s also ready to leave the space station where he served and return to Earth, where he’ll reunite with his estranged son Danny. 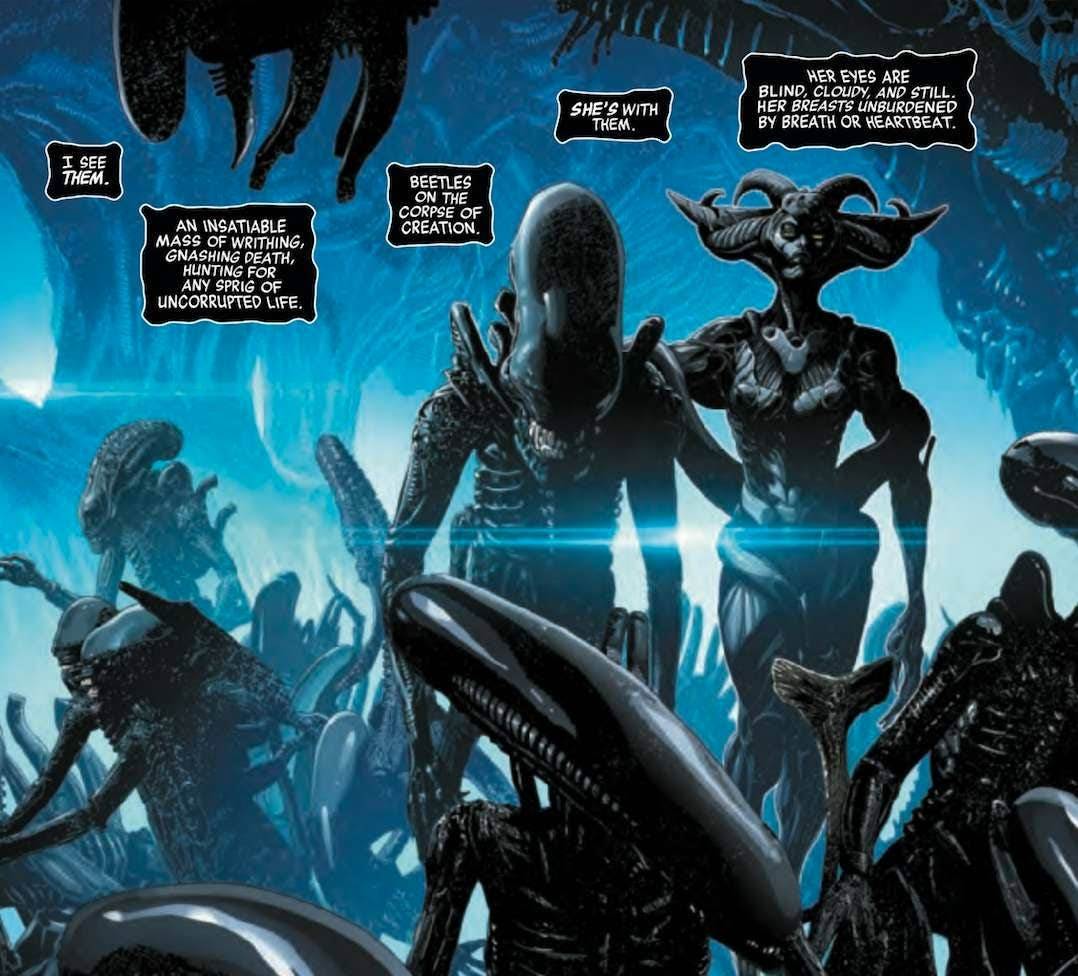 But unbeknownst to Gabriel, as an adult Danny has fallen in with a group of eco-terrorists intent on bringing Weyland-Yutani down at any costs, and that includes swiping a keycard from his father during a brief visit in “The United Americas.” While Gabriel continues his sessions with another Bishop android on Earth in an effort to keep his terrifying wartime flashbacks at bay, Danny and his disturbingly violent friends pay a visit to Epsilon Station, where they get much more than they bargained for upon infiltrating the station’s secretive biolab– which they thought was a simple server farm they intended to blow. 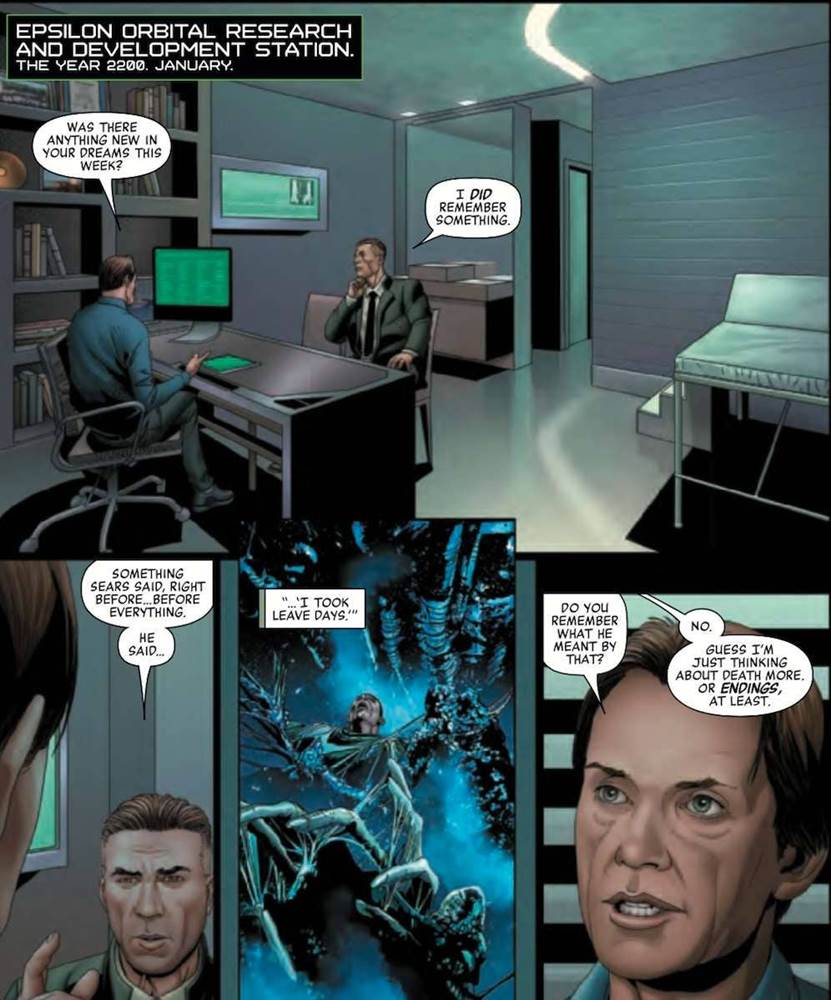 I think Phillip Kennedy Johnson has done a terrific job in getting things off to an interesting and appropriately eerie start here, though the story evidently won’t have quite the slow burn I’ve always admired in the first couple Alien films– not to mention in Dark Horse’s first original story in the series, Aliens: Outbreak from 1988. And while I’ve never been in love with Larocca’s almost-too-literal artwork when I’ve encountered it in the past, his undeniable knack at rendering likenesses and dynamic, well-defined setpieces helps ground us in Alien’s eerie future even before the action begins. With last fall’s announcement of an upcoming Alien TV series from the brilliant Fargo and Legion showrunner Noah Hawley, it’s an extremely exciting time for the franchise, and Marvel’s Alien comic is sure to be a big part of that as well. I’m very intrigued with what the title has to offer so far and I absolutely look forward to reading more.

Marvel’s Alien #1 is available now wherever comic books are sold.