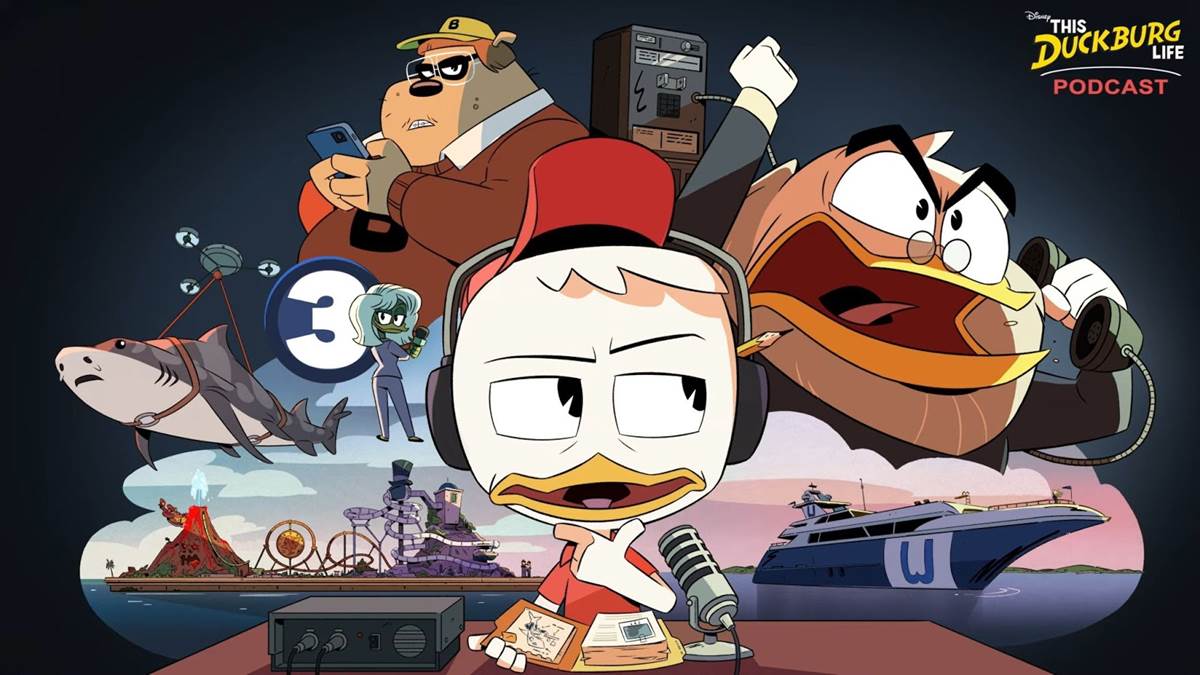 Hello and welcome to the fifth installment of Laughing Place’s seven-part recap of the new podcast This Duckburg Life, which builds upon the fictional universe established in Disney XD’s recently completed DuckTales reboot series.

This Duckburg Life episode 5, entitled “The Framing of Flintheart Glomgold,” begins with host Huey Duck (voiced by Danny Pudi) recounting the day his Uncle Scrooge McDuck opened a new water park named Scrooge’s Splashland at Duckburg Pier. The day went well until a swarm of flying drones dropped 300 leopard sharks onto the park. Naturally police immediately suspected Scrooge’s arch-nemesis Flintheart Glomgold (Keith Ferguson), and arrested him within an hour of the incident. Evidence for his guilt came from two social media check-ins at a shark store and a drone store. Glomgold’s ensuing trial broke the record for Duckburg’s shortest trial ever, to the point where even his defense attorney says, “We all pretty much know he did it, right?” The judge immediately agrees and asks the jury to skip ahead to finding ol’ Flinty guilty.

Huey continues the story by saying that one day soon after he received a collect call from Glomgold, who was in prison at the time. Flintheart begs Huey for help in proving his innocence, claiming he’s been framed. Huey reluctantly agrees, with part of him believing Glomgold may in fact be innocent. Huey and Glomgold continue their conversations over the phone, with the latter repeatedly insisting he’s not guilty: “I know I try to ruin Scrooge’s life any chance I get, but I promise you I didn’t do it this time!” Flinty tells Huey to look into the social media check-in, which he says he never made. As part of his investigation, Huey interviews tech guru Mark Beaks (Josh Brener), inventor of the WaddlePhone, which Glomgold used that day. Beaks, calling in from his yacht in Birdmuda, says it’s not possible to falsify a check-in: “WaddlePhones are supes secure… and they barely leak battery acid anymore.” 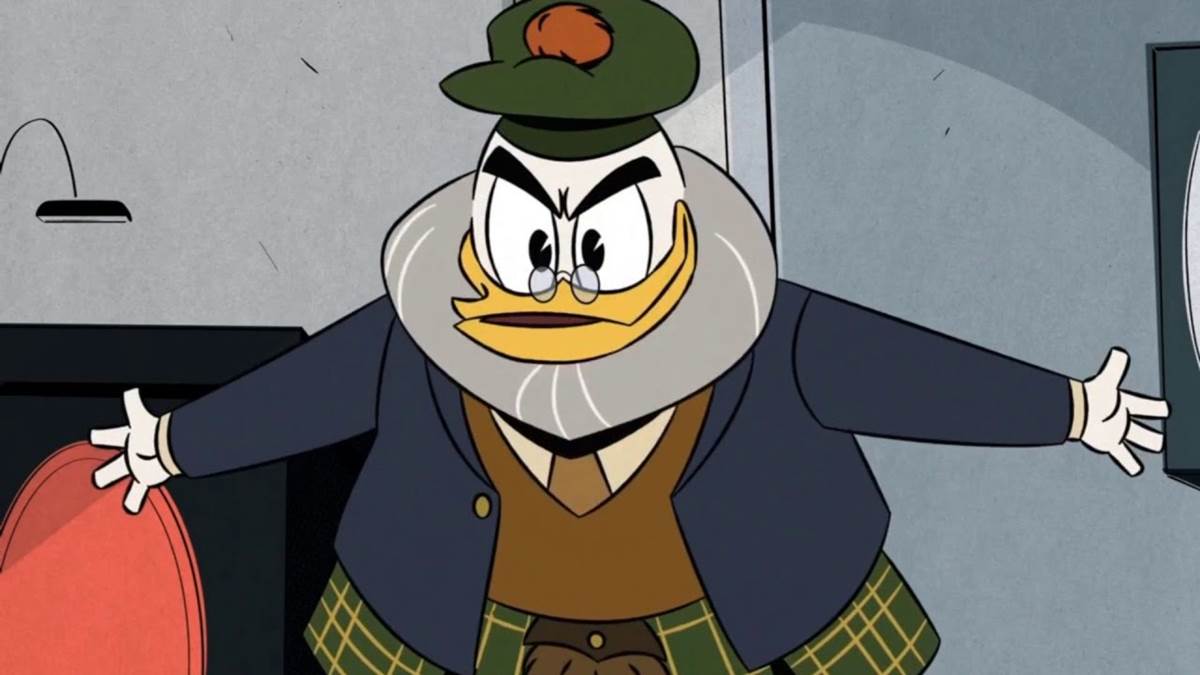 On another phone call with Huey, Glomgold says the attack on the water park was not his style, as it only consisted of two steps. Huey reasons that the plan also seemed unlikely to be Glomgold’s work because it was actually successful, remembering a different attempt the billionaire had made using drones the previous year in which he ended up getting trapped in a rockslide. We then hear a commercial from Huey’s brother Louie Duck (Bobby Moynihan) for a new business called Cars for Quacks, the premise of which is basically Louie begging for others to donate their cars to him personally. Huey returns to investigating the case further by visiting Debbie’s Discount Drones, where Debbie says she hasn’t seen Glomgold “since last year.” She does remember another guy who bought 300 drones from her recently, whose name was Big Tech Beagle of the Beagle Boys.

Huey adapts an undercover persona named Eddie Spaghetti and pays a visit to the junkyard to speak with Big Tech Beagle. The criminal says he flew a bunch of drones the previous week for a client who found him using a jobs app called GlomGigs: “You can hire bad guys for anything– robberies, forgeries, even flying drones.” Huey confronts Glomgold about him apparently having hired Big Tech Beagle to carry out the attack for him: “So what? I created an app to hire criminals for crimes. That doesn’t mean I’m a criminal.” Huey decides the next stop on his investigation has to be Sheila’s Sharks, but first Webby Vaderquack (Kate Micucci) cuts in with another ad for a business called Mail Monkey that sends a trained monkey to your friends and family to tell them all about you and what you’ve been up to lately. 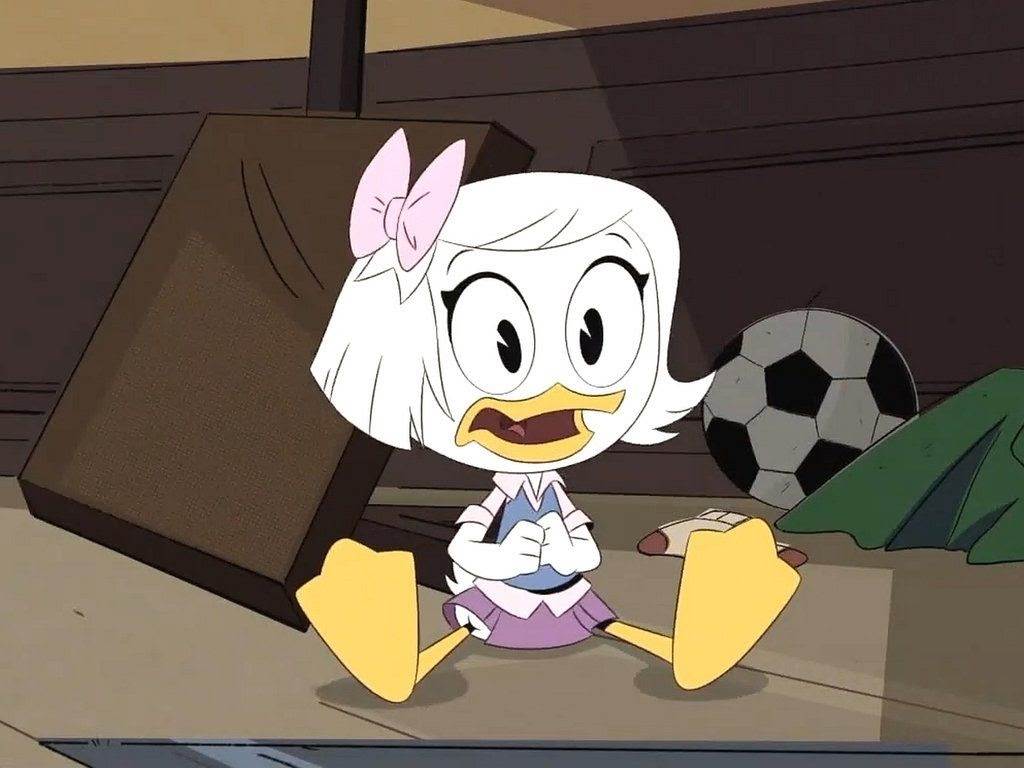 At Sheila’s Sharks, Sheila says Glomgold is her best customer, and that he “came in and bought a bunch of sharks the day the water park was attacked.” Believing that he now possesses irrefutable proof that Glomgold committed the crime, Huey decides to throw away all of his files on the case in Sheila’s trash and calls Flintheart in jail one last time to tell him he’s giving up on his case. Glomgold admits he bought the sharks, but he says he didn’t use them to attack the water park. Instead, he had a different plan to disguise the sharks as butlers and get them to work for Scrooge McDuck for years without raising suspicion until he gave them the cue to attack. Huey hangs up on Glomgold and says he is ashamed of himself for trusting a pathological liar, but then he receives another phone call from Sheila at Sheila’s Sharks.

Sheila was taking out her trash when she saw Huey’s case files. Looking at photographs of the sharks that attacked the water park, Sheila noticed they were leopard sharks, but she only sells tiger sharks. She says leopard sharks are rare and only found in the waters of Birdmuda. Huey makes the connection to Mark Beaks, and discovers GlomGigs was released months before Beaks’s app WaddleJobs, and “the two apps are so similar.” It turns out Beaks copied Glomgold’s idea, but in his defense he “made it better… it’s called innovation.” Beaks admits to hacking into Flintheart’s phone to make it look like he checked into those stores, hiring Big Tech Beagle to fly in the leopard sharks from Birdmuda, and framing Glomgold for attacking Scrooge’s Splashland. Glomgold gets released from prison and then arrested again later that day for trying to train sharks to be butlers. 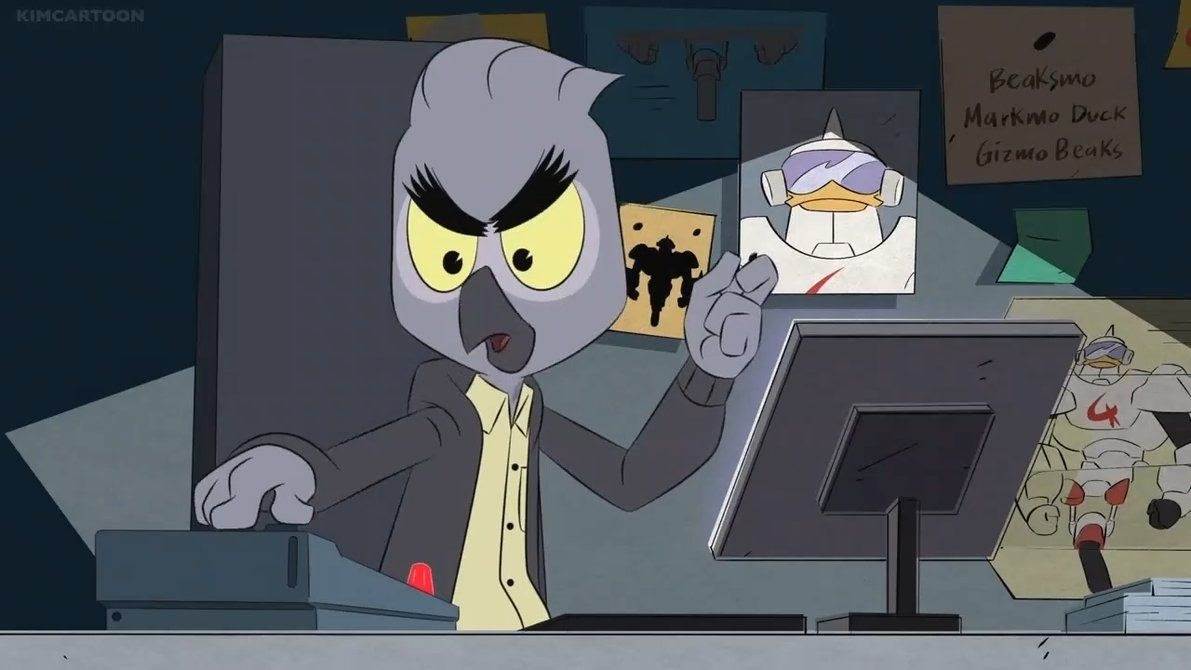 Before Huey can wrap up the show, Webby interrupts and says a call came in from Magica De Spell, who has been arrested for summoning a demon for attacking Uncle Scrooge, but claims she’s been framed. “Oh no…” grumbles Huey. Donald Duck (Tony Anselmo) then reads the credits for This Duckburg Life once again.