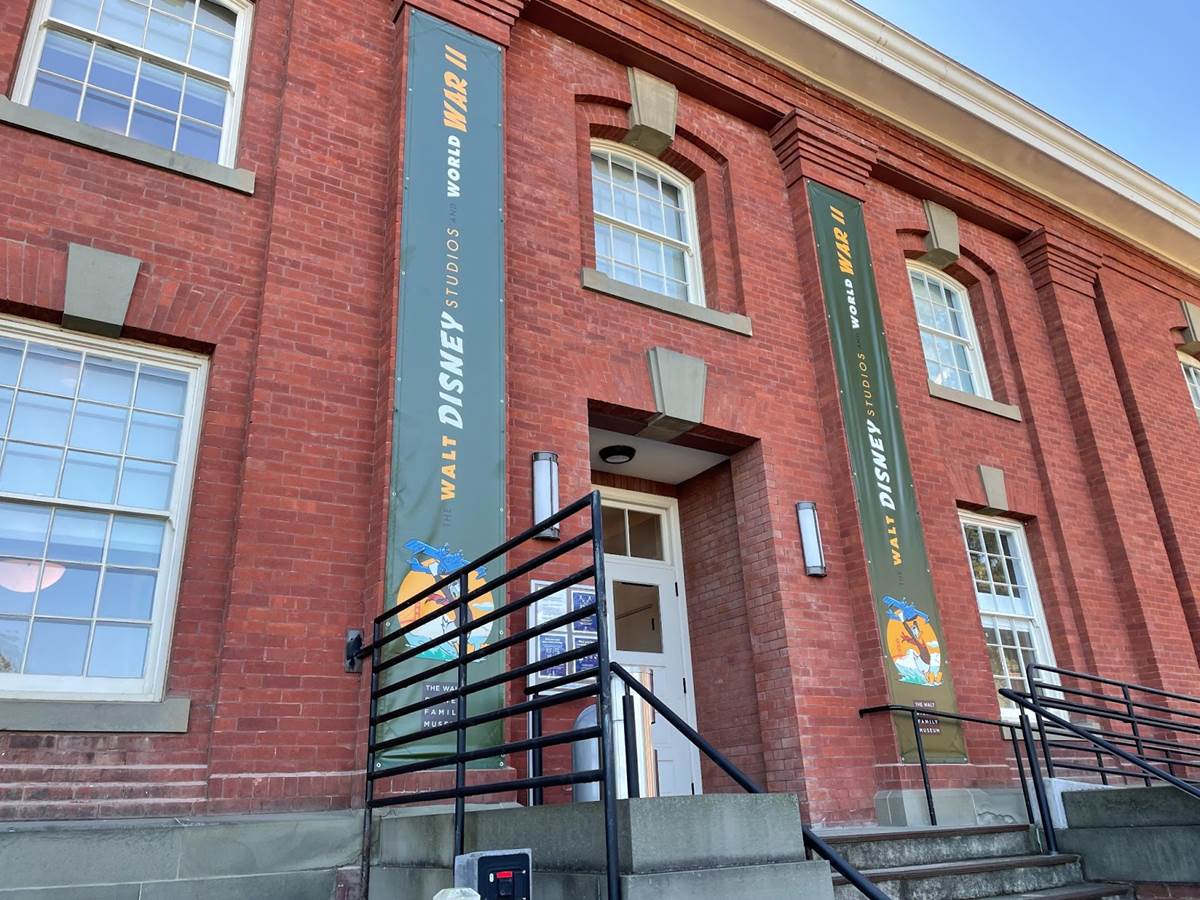 Alex: You got to curate the newest special exhibit at The Walt Disney Family Museum. How did that opportunity come about?

Kent Ramsey: I am a trustee at the Museum of Flight in Seattle, and I wanted to create an exhibition that would attract a broad audience to our museum.  Disney and aviation are my two main passions and so I decided to approach the Disney Company to see if they would work with me on this exhibition.  Michael Vargo from D23 was luckily in Seattle right after I made my initial Disney inquiry, and he toured our museum and invited me to the Disney Company archives to meet with Becky Cline, the Archives Director.  Upon arrival at Burbank for my first meeting with Becky, I discovered that The Walt Disney Family Museum was also working on a World War II exhibition.  The Disney Company introduced me to Kirsten Komoroske, the museum’s Executive Director, and I met with her to see if we could work together.  Our vision of a World War II exhibition was quite similar, and we immediately started collaborating.

Alex: How did your interest in both Disney and World War II begin and has this always been your biggest area of interest within Disney's rich history?

Kent Ramsey: Watching Walt Disney every Sunday night on television ignited my interest in Disney, plus reading Disney comics, traveling to the 1964-65 New York World’s Fair to see Disney’s four special exhibits, and naturally visiting Disneyland furthered my interest.  I loved the Davy Crockett miniseries on TV and later worked as a Keel Boat skipper at Walt Disney World during my college summers.  I was also fortunate enough to have Bob Foster, one of Walt’s and Roy’s Company attorneys, host me at his Orlando area home.  Bob was responsible for purchasing the 27,443 acres of land and establishing the Reedy Creek Improvement District for Walt Disney World.  I have stayed very close to the Disney Company during my adult years through multiple trips to Walt Disney World, Disneyland, Burbank, and Glendale.  I chose the Disney war years because it is a rarely shared period of the Company’s history.

Regarding World War II, I grew up surrounded by the Greatest Generation, and my uncle flew Lockheed P-38s in the Pacific and European Theatre of Operations and my father was in a Sherman tank during the Battle of the Bulge.  Practically all the adults in my early life contributed to the war effort, and I loved their stories and how they were consistently self-effacing.  They would all say that they were just citizen soldiers.  I read everything I could about the war starting in elementary school, and then began visiting archives and museums in the U.S. and U.K. as an adult.  The uncle that I just referred to, Captain John G. Austin, was KIA one month before the war in Europe ended, and I hosted his squadron reunions for ten years in his memory.  It is also important to point out that the Disney insignia team created a group and a squadron design for my uncle’s England assignment.  In addition, I have hosted many World War II reunions at the Museum of Flight.  Finally, I am also a co-author of a World War II aviation book titled “Storm of Eagles”.

Alex: With such a heavy topic to cover within the context of the Walt Disney Studios, how did you lay out the narrative of the exhibit?

Kent Ramsey: We decided at the very beginning that this would be an educational exhibition.  We wanted to demonstrate the many ways that the Walt Disney Studios contributed to winning the war.  The Studios produced educational, entertainment, training, and propaganda films as well as insignia designs and substantial print media.  Most people do not realize that the patriotic Walt Disney dedicated over 90 percent of his Studio’s production to the war effort.  Walt did not wish to be labeled as a war profiteer and carefully performed a difficult balancing act between keeping all his workers employed and operating the Studios without profit.

Alex: Were there any items you wanted to include but couldn't due to space limitations? If so, what were they?

Kent Ramsey: We started out with over 900 objects and whittled the list down to 550.  We cut many Disney nose art photos as well as well as several military insignia patches, but we only had so much room to work with.  I also wish that we had room for an animation exposure sheet for one of the film shorts that we cover.  It is wonderful to have too many rather than too few objects for any exhibition.

Alex: There are some incredible artifacts on display, including Woolie Reitherman's jacket. What was the process like to accumulate these kinds of items and how did you know where to look?

Kent Ramsey: The artifact hunt was the most fun part of pulling this unique exhibition together.  The Walt Disney Family Museum has a deep bench of generous contributors as well as a great archive.  The Nine Old Men’s surviving family members, many kind private collectors, and other museums are just a few of the wonderful sources for exhibitions at the museum.  The Walt Disney Company Archives, Photo Library, Film Library and Animation Research Library were also significant sources for this exhibition.  The Walt Disney Archives was a critical source for our insignia section regarding graphic designs and color guidance.  I was also happy to provide many unique objects from my personal collection for the exhibition such as a Norden bombsight, a Jaymar Gremlins puzzle, a Fifinella WASP patch, and a 1/32 scale Boeing B-17 with Disney nose art.

Alex: The exhibit features artwork and even clips from some of the propaganda shorts created by Walt Disney Studios for the war effort. Which projects do you think were the most significant that Disney produced during that time?

Kent Ramsey: “Victory Through Air Power”, a topical feature propaganda film about long range strategic bombing, was not a financial success, but it did influence military decision makers.  I would also say that many lessons from “Reason and Emotion” and “Chicken Little” can still be applied to our current time.

To learn more about “The Walt Disney Studios and World War II,” click here to read Rebecca’s recap of the exhibit.

Visit WaltDisney.org to purchase tickets and make a reservation to experience “The Walt Disney Studios and World War II” for yourself.

Whether you make it to the exhibit or not, you can bring home amazing souvenirs from the Walt Disney Family Museum’s online store.