Disney XD’s acclaimed DuckTales reboot may have recently come to an end, but that doesn’t mean the adventures are over for Huey, Dewey, and Louie. Beyond the This Duckburg Life podcast which builds upon the characters and world established in the animated series, there’s also a new children’s book entitled DuckScares: The Nightmare Formula that sends Donald Duck’s nephews on a somewhat scary but largely kid-friendly adventure in Europe.

DuckScares: The Nightmare Formula (written by Tommy Greenwald of other kids’ books like Game Changers, Crime Biters!, and the  Project Z series) isn’t officially connected to DuckTales, but could be considered something of a prequel to the series, as it opens in Duckburg with the nephews living with their uncle Donald. Scrooge McDuck doesn't show up in this story, but there is a cameo appearance by his money bin. Dewey Duck serves as the narrator of this tale, but his brother Huey and Louie also frequently pipe in, with their own voices represented by different fonts, to give their perspectives on an eerie trip to Germany they took as part of a student exchange program. Upon arriving in Berlin, the triplets make friends with their hosts, attend school, learn to like the local cuisine, and visit a wondrous toy shop run by an eccentric inventor named Dr. Z. At that point it’s not difficult for the reader to figure out who the antagonist of the story is going to be, as toys from the shop bestowed as gifts to the nephews and their friends start affecting them in strange, unexplained ways. As the plot unravels, it becomes clear that Dr. Z owes a lot of his fear-inducing plan to the villain called the Scarecrow from the Batman franchise, but children of this book’s target demographic age might not be overly familiar with the movie Batman Begins or Batman: The Animated Series, so that particular bit of textual appropriation can be forgiven. The narrative also ends on a cliffhanger that implies the boys may encounter Dr. Z again as their European travels continue, and the book is published under a series titled Disney SpookyZone.

I can’t really recommend DuckScares to any readers older than 10 or so, but Greenwald does a good job of making Huey, Dewey, and Louie relatable to kids younger than that, who are sure to get drawn into the story and imagine themselves facing their own fears in the same way the nephews do. Illustrator Elisa Ferrari’s drawings are sketchy and stylistically very different from previous depictions of the Duck triplets, but in a way that definitely fits the light-hearted tone of this adventure. There’s danger and derring-do awaiting the nephews on their journey, but it’s never anything more extreme than what kids might find in a Goosebumps book– do kids still read Goosebumps or am I dating myself?– so this is mostly just a fun and fairly tame way to introduce younger Disney fans to these characters, not to mention get kids reading via appealing exploits with familiar friends from Duckburg. 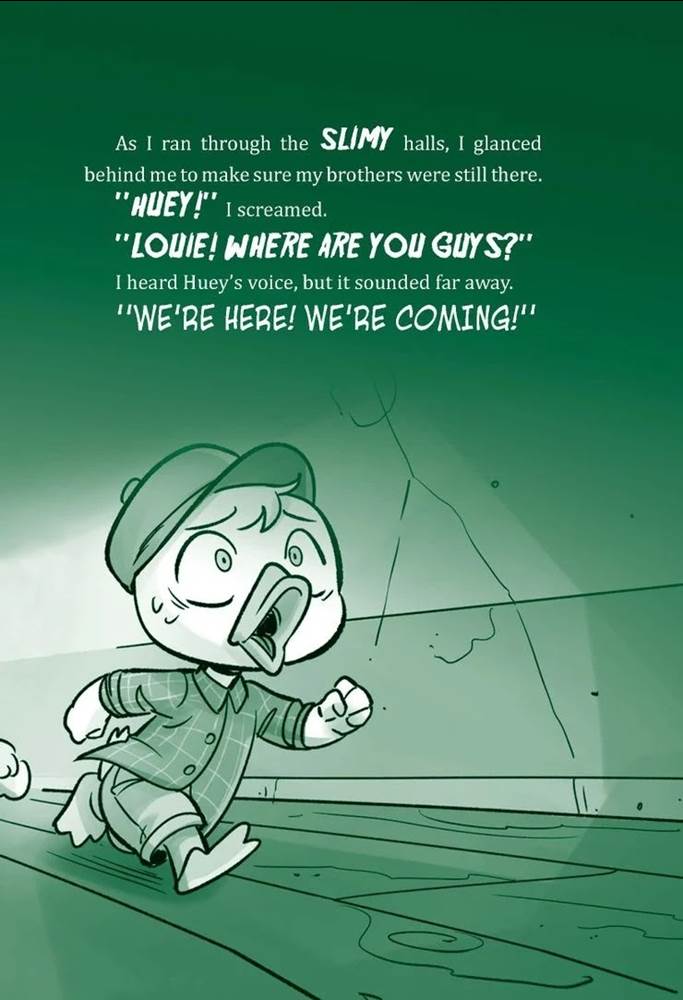 DuckScares: The Nightmare Formula is available now wherever books are sold.