Earlier this year we got to celebrate the 20th anniversary of Disney California Adventure with a special presentation thanks to a collaboration between D23 and Walt Disney Imagineering. While a substantially younger anniversary, it’s an anniversary nonetheless, and D23 and Walt Disney Imagineering have teamed up once again to bring us a special presentation celebrating 5 years of Shanghai Disney Resort!

While Disney California Adventure has quite the evolutionary story to focus on, becoming almost an entirely different park in its two decades of existence, the Shanghai Disney Resort has been a success right out of the gate. As such, don’t expect this presentation to chronicle failed attractions and design attempts but instead focuses more on the political aspects of bringing a Disney Park to Mainland China. Hosted by Leslie Iwerks, who not only brought us the last presentation but also the hit Disney+ Original Documentary Series, The Imagineering Story, we take a long look at the development of the 6th “castle park” on the globe. Imagineers Bob Weis, Doris Hardoon Woodward, Howard Brown, and fellow Imagineer and star of The Mandalorian Wing Chao join Iwerks for a conversation where they share some of their favorite memories creating the park.

Iwerks is familiar with a lot of work done in the park, having visited the construction zone numerous times for work on her documentary, The Imagineering Story. Admittedly, a lot of this conversation went over my head upon the first viewing as I was eagerly waiting for more information about what happened to other developments in Shanghai, looking back to early announcements in 2014 (and some even earlier) that it would also be home to an Asian version of EPCOT and Animal Kingdom as well.

Chao took the lead and explained much of the origin story of Shanghai Disneyland, noting that China is a huge market for the Disney brand. The time was the late ‘90s, when much of the WDI development was focused on various expansions and projects at the domestic parks. The timeline dictates that most of this would be finishing up Disney’s Animal Kingdom and Disney’s California Adventure. During all this, Chao was also working as a scout for locations in the market for expansion, while also negotiating with the Hong Kong government and commuting to Shanghai at the same time. It was decided that Hong Kong would serve as the entry point, and then move over to mainland China where they ended up deciding on Shanghai for a number of reasons. Chao cited that the city already had a tourist market, an upcoming World’s Expo, and the huge population and largeness of the city would make it an ideal location. He also mentions, though he didn’t elaborate on why, that negotiations between Shanghai and Disney would take a lot longer than Hong Kong, which is why they were working on both at the same time.

He also explains that they got in the negotiations at a perfect time because the city knew where they were going to have to expand into rural areas, and where already designing bridges and roads, even a new airport in the area, and worked together to develop recreation zones, not only for Disney but for future offerings in the area. Though we can’t provide images, if you’re a D23 Gold Member, I invite you to look at the maps Chao shows off while telling anecdotes about the negotiations because eagle-eyed viewers will notice that in the 7 square kilometer site, there are three red zones dictating park use, only one of which is developed. See that aforementioned detail I was holding out for above.

A lot of his explanations seemed familiar, channeling the modern-day tale of the Disneyland Forward project, which is seeing the Disneyland Resort work with residents of the city of Anaheim to get areas of the Disney-Owned land in California re-zoned so they can make future adjustments as needed. The big difference between this and the Shanghai developments is the area isn’t a rezoning, but rather planned from the outset.

Most of the Imagineers, despite whatever they were working on at the time decided they couldn’t pass up the opportunity to work on a “gate level” project, especially the notion of working on a “Castle park,” the 6th and newest in the history of Disney parks.

Doris talks about how she started her journey with Wing Chao many, many years ago searching for the entry point (Hong Kong), knowing full well they would eventually be doing a project in Mainland China, and also more about her personal journey, noting that it felt comfortable because her and Chao are native to the country. She then goes on to tell the story that her focus was shifting to her family in the late ‘00s thinking it might have been time to take a break when Bob Weis sent her a message asking her to come to the Shanghai project. It was the root in her own heritage, as well as that aforementioned opportunity to work on a “gate-level” project so massive that led her to take the carrot that was being dangled in front of her. The group also talks about the Enchanted Storybook Castle, and how the large unique castle is indicative of a phrase said by the government during all those early negotiations, which roughly translated to “we want the biggest and the best.” And not just the castle, but an idea that would echo throughout the entire park. Another mantra we heard, Bob Iger’s “Authentically Disney, Distinctly Chinese.” Doris said the statement was very thoughtful, but also took some time to realize what he meant by it, saying you throw in the dragons and the pagodas and all of that, but go through and ask themselves why would we want to go through and show the culture what already exists to them. She also notes that the culture isn’t aware of all of these stories, so they had to do “double duty” and uses the carousel as an example, explaining how she picked the stories that are represented and relevant to those who would come to the park. She also cites the Gardens of Imagination in the park, noting that it came to mind because most visitors from this culture are from a concrete jungle and aren’t used to the nature and the gardens and it would truly be something special, along with the opportunity for photos since photo taking is more appealing than those E-Ticket attractions that are also prevalent in the park. 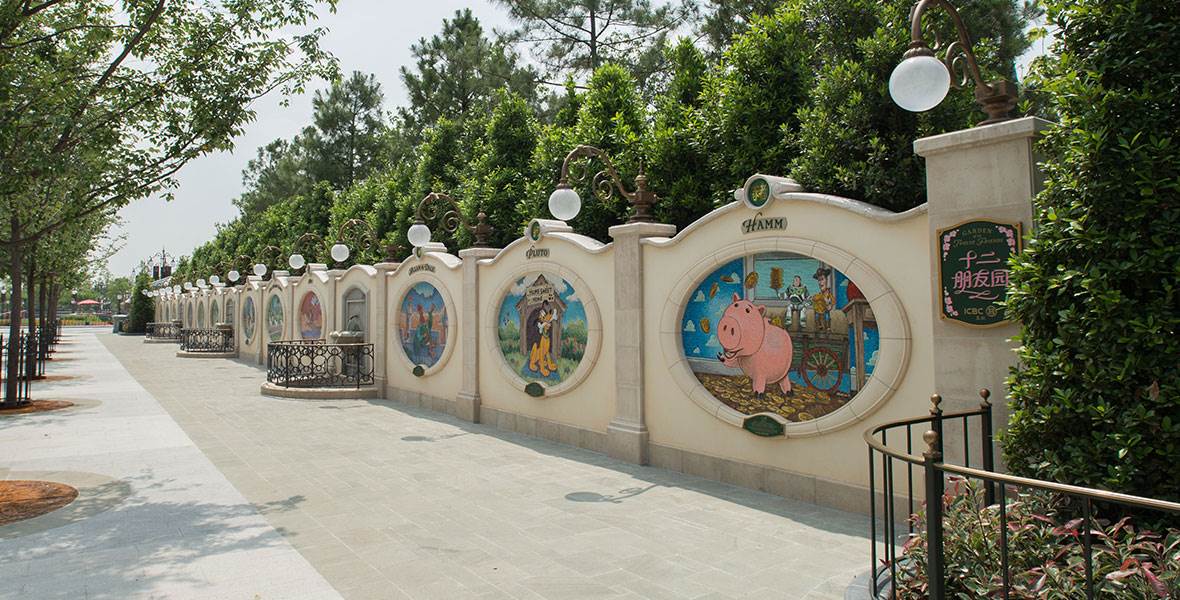 Before wrapping up the origins of Shanghai Disneyland, Weis wanted to add a story that even though Disney Legend Marty Sklar had retired, he had been present at every other Disney Park opening so Weis invited him to the opening of Shanghai Disneyland to keep the tradition alive. Weis said that Marty thought it was very special that they thought of him, and Iwerks shared that she was happy she got to interview him that opening day.

We join many folks who share some of their favorite stories from the last five years at the park, and maybe a little bit more about what to come. The host of this segment of the show is Keith Gallo, Director Creative Development, Walt Disney Imagineering Shanghai. He shares some well wishes and a little bit of information about the park, but the primary focus of his is showing off the Mickey Floral, present at every Disney “Castle Park” around the globe, but notes how this one is different because it changes throughout the year, with the addition of Duffy, Donald, and Minnie throughout the year.

We also get a glimpse of Toy Story Land, one of the newest areas to open at the park from Chris Yu, Associate Show Design & Production Manager, Walt Disney Imagineering Shanghai. Who shares not only the attractions in the land, but also the details that many can find within, including special Chicken Figures that are found in Al’s Toy Barn that were designed in conjunction with Pixar artists. 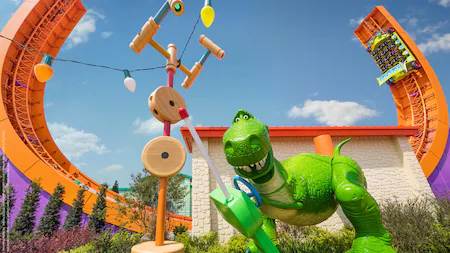 Art Director Leia Mi shares some insight into her work developing many of the Enchanted Storybook Castle elements, and telling the story of Snow White in that aforementioned “Authentically Disney, Distinctly Chinese” way, including illuminated effects telling the story in custom chinese fonts. She also reflects the special moment of installing the top spire of the castle, which she designed. She also talks about the installation of the Marvel Characters in Stargazer’s Grill in Tomorrowland, Chip and Dale into new experiences in Adventure Isle, and just in time for the parks anniversary, she showcases some of the “Hidden 5s” that can be found throughout the park, noting that there are over 10 out there in the park before showing off some of them in the castle rotunda, and on the Zootopia construction walls. 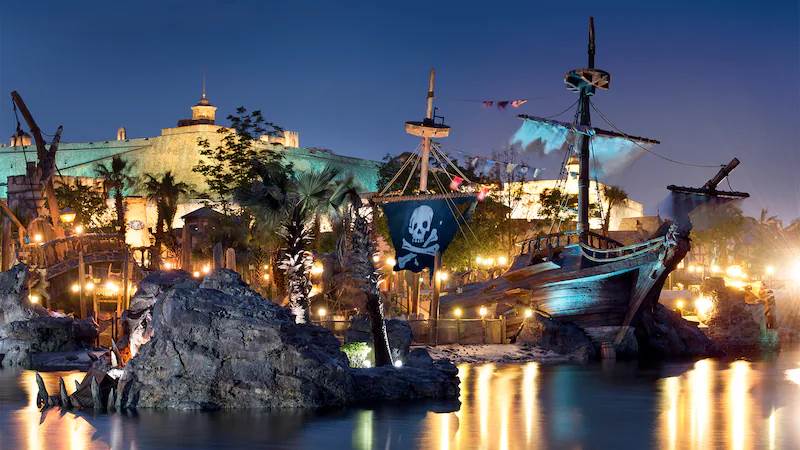 Imagineer Tom Williams shared a fun story about the installation of the vertical wind tunnel in the Captain Jack’s Stunt Spectacular saying they were just going to turn on the tunnel for executives so they can hear how it sounded when the performers jumped in without wires or anything and started to performing, bringing the audience to their feet for an amazed round of applause before showcasing some details about the new Mickey’s Storybook Adventure which recently debuted at the park showcasing many Disney Stories including Frozen and Zootopia. 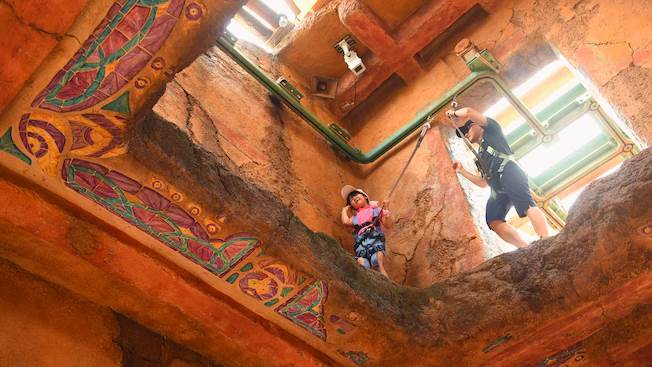 Imagineer Dustin Schofield gives us a sneak peek at the new Zootopia themed attraction coming to the park. Kind of. He mostly focuses on the construction walls and the doors built along them for the various types of creatures that would walk past the wall or go through those doors. Earlier though, Schofield worked on Camp Discovery, saying that many of his colleagues thought he was insane for designing an intense ropes course around the artificial mountain but was more excited when he saw that concept art come to life. 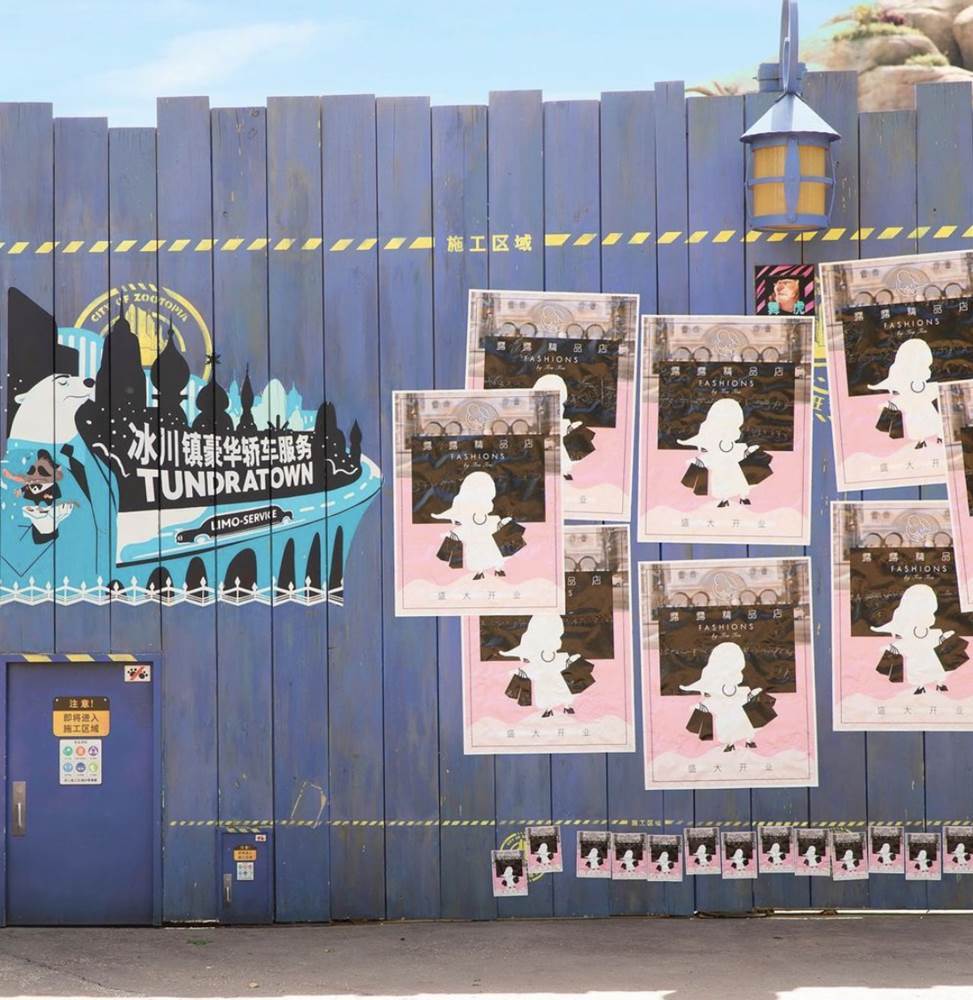 We get to learn a little bit more about Zootopia but nothing too revealing, just more about the animated figure of Mr. Polar Bear.

Imagineer Michael Jung, Executive Theatrical Development, Disney Live Entertainment, who I immediately recognized (and you might too) from all those early Rivers of Light promo videos, is responsible for the all new castle show Illuminate! A Nighttime Celebration. He shares that it was inspired by the original show, Ignite!, but takes it to a new level, celebrating with Rapunzel, Miguel, and even Raya, who try to find a light to be inspired. They also used the opportunity to install infrastructure throughout the Gardens of Imagination to truly immerse the guests in something innovative. The show also marks the first time that Marvel characters have made an appearance on a Disney Castle. Leslie Iwerks closes out the presentation like any day at a Disney Park and offered up a look at the new show.

If you’re a D23 Gold Member, the presentation is available for viewing until July! Be sure to check it out! 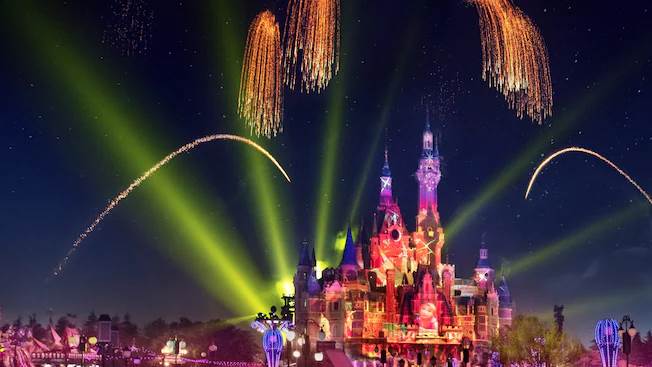