The long awaited, eagerly anticipated, Amphibia and The Owl House crossover event occurred over the weekend during [email protected] 2021.

Hosted by the Executive Director of Disney Television Animation Doug Bensimon, the panel opened with a sneak peek at the new series coming soon from Disney Television Animation, The Ghost and Molly McGee, where we see Molly move into a new home with her family and immediately discover that it’s haunted by a ghost that vows to haunt her and be at her side at all times, to which Molly excitedly agrees, looking forward to her new BFF.

After that clip, Bensimon is joined by the creator of Amphibia, Matt Braly, as well as the Creator of The Owl House, Dana Terrace and that series’ Art Director, Ricky Cometa. Together the three reflect on their series so far, with insight into the events of the series thus far being offered. While discussing The Owl House, praise is given to one of the latest episodes, “Hunting Palismen”, which expands into the city of Latissa and we learn more about The Golden Guard, whose name we learn is Hunter, and a bit more about the world of the Boiling Isles. Dana and Ricky explain more about the new city, and how it was referenced and built up through the writing in the show before ultimately being seen on screen.

They mention, while laughing, that it was thought of being a rough place, almost the armpit of the Titan/The Boiling Isles, thus giving it its name, Latissa, after the muscle latissimus dorsi, which the pair continue laughing about because they discovered later that that muscle is the lower half of a back, not so much the armpit. They also show examples of the art design for the city, pointing out that the city is made out of bone, with residences and businesses almost in the honeycomb of the bone marrow. Dana herself commented on how she just loves to make gross things pretty. 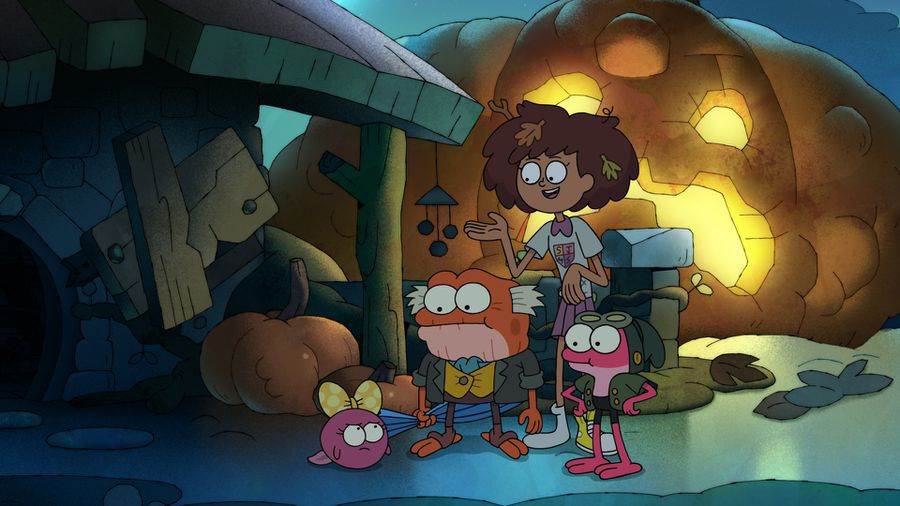 Over in the land of Amphibia, we address the season 2 cliffhanger where we saw a handful of betrayals and the Plantars get sent to the Human World of Los Angeles with Anne. Braly shared his excitement that now Anne’s parents will be fully fleshed out core characters, but he also responds to fans wondering how time works between the two worlds, and points out that time has continued in a linear way, which creates big implications for the Anne, Sasha, and Marcy, as well as their parents. Speaking of parents, Braly’s own mother, who previously voiced Anne’s mom in brief moments of the series, now returns for the much larger presence of her character.

We are then treated to a clip from the upcoming season of the show, where we see Anne and the Plantars in front of Anne’s home as she returns to see her parents again. Knowing the presence of large talking frogs would startle them, she tells the Plantars to stay outside until she gives them the signal to come in. Anne is reunited with her parents, and almost instantly Hop Pop inadvertently mistakes a bird noise for the signal and the Plantars reveal themselves almost immediately.

After the clip, Ricky has left and the panel is now joined by the voice casts of both shows: 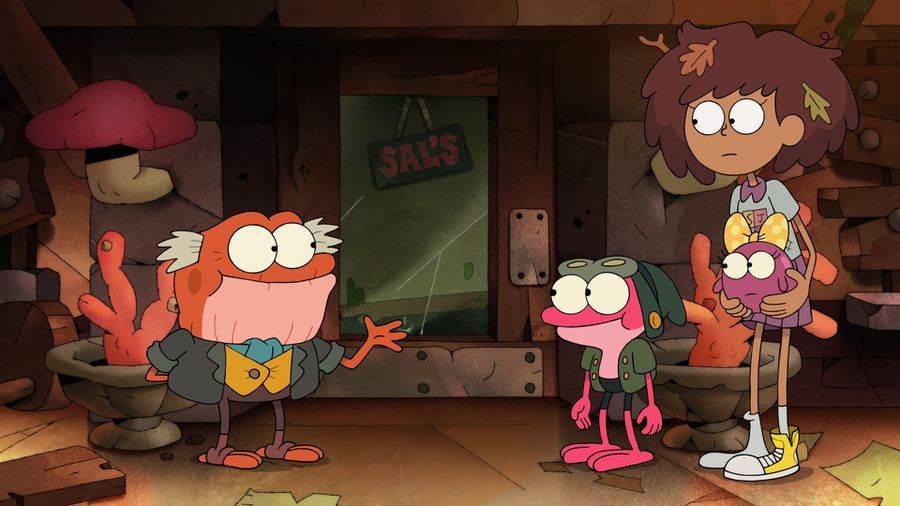 The group all gives fans what they have been clamoring for and does a brief table read of a short script where Luz and Eda open a portal that takes them to Amphibia where Luz and Anne meet and realize how much they have in common (both being girls taken out of their human world and adopted into a found family) and share some nice moments before we discover that Eda picked Hop Pop’s pocket and stole his wallet. The table read also included a surprise appearance by the voice of Amity, Mae Whitman that references a brief kiss shared between her character and Luz in a recent episode. After the table read, there is some brief Q and A with each actor talking a bit about their character. One thing the entire cast agrees on is the recording of “efforts,” those little grunts and noises of physical, well, efforts for the character, is the most challenging process. Wendie Malick stole the show though (with a couple of bleeps in the process) describing her love for her character, Eda, and her ability to just be herself, not conforming to anything, and has an incredible love for her family that she has created for herself but can still be a bad—, but most importantly that her character shows that everyone has a place somewhere, they just need to find it. You can watch the full panel below!

Both The Owl House and Amphibia can be seen on Disney Channel with episodes available on Disney+ as well as the DisneyNOW app.