In Walt Disney’s era, Chip and Dale spent most of their screen time as adversaries of both Mickey’s faithful dog Pluto and the cantankerous Donald Duck. Across 24 theatrical shorts produced between 1943 and 1956, the duo were rarely the main attraction, but left an unforgettable mark. And while they’ve had other side adventures in the decades since, most notably the Disney Afternoon series Chip ‘N’ Dale: Rescue Rangers, the acorn-loving brothers have mostly lived as side characters to the “Sensational Six.” With the newest Disney+ animated series, Chip ‘N’ Dale: Park Life, that all changes. Drawing on the style of the original Walt-era shorts, the format of each 30-minute episode is divided into three shorts. As with the original shorts, Chip and Dale don’t really talk but speak in squeaky gibberish, voiced here by Matthew Géczy (Chip) and Kaycie Chase (Dale). Devoted fans of the original animated shorts and the debut lineup of Disney will delight in cameos of characters from the original shorts and Disney Afternoon shows. After all, the park that Chip and Dale live in now appears to be adjacent to Duckburg, Spoonerville, St. Canard, etc…

A co-production between French animation studio Xilam and Disney EMEA, this international series feels designed to be easily accessible by a global audience. In addition to Chip and Dale speaking in gibberish, there’s no spoken dialogue in the first two episodes that I experienced. In that regard, it’s not much unlike some of the Pluto shorts sans Mickey where he faced off against these two mischievous munks. Series director Jean Cayrol has married the style and approach of the original shorts, set in the expanded Disney Afternoon universe, and told with 2021 storytelling sensibilities and technology.

The animation style feels very mid-century, but not necessarily Disney’s esthetic. If anything, UPA served as a big influence with thick character lines on simplified versions of these classic characters. The backgrounds feel a little Hannah Barbera-esque with sponge painted textures adding flavor to this colorful world. And more modern than that, there’s a Japanese kawaii esthetic at times, with characters' eyes becoming enlarged and glossy during some of the most adorable moments. The score is also very modern, like an uptempo Japanese video game akin to Disney’s Tsum Tsum, not quite techno but far from traditional. Each short has a lot of fun with both the characters and the world. In the debut episode, Chip and Dale feel guilt over hoarding all the acorns from Pluto and his puppies, get into trouble when an unattended playpen of babies ends up near their tree, and go on a misadventure when their tails get stuck together. It’s all cute, innocent fun in 7-minute bursts. And while most of the character cameos are easy to spot, the ever popular Clarice (who appeared in just one short, Two Chips and a Miss) is the only one who has been modernized beyond easy recognition, introduced in the show’s second episode.

More traditional than The Wonderful World of Mickey Mouse but still with plenty of fan service moments, Chip ‘N’ Dale: Park Life is a treat for both kids and devoted Disney fans. It’s good, clean fun for all ages and with no dialogue, it’s not a passive experience, but one that requires your full attention to truly appreciate. 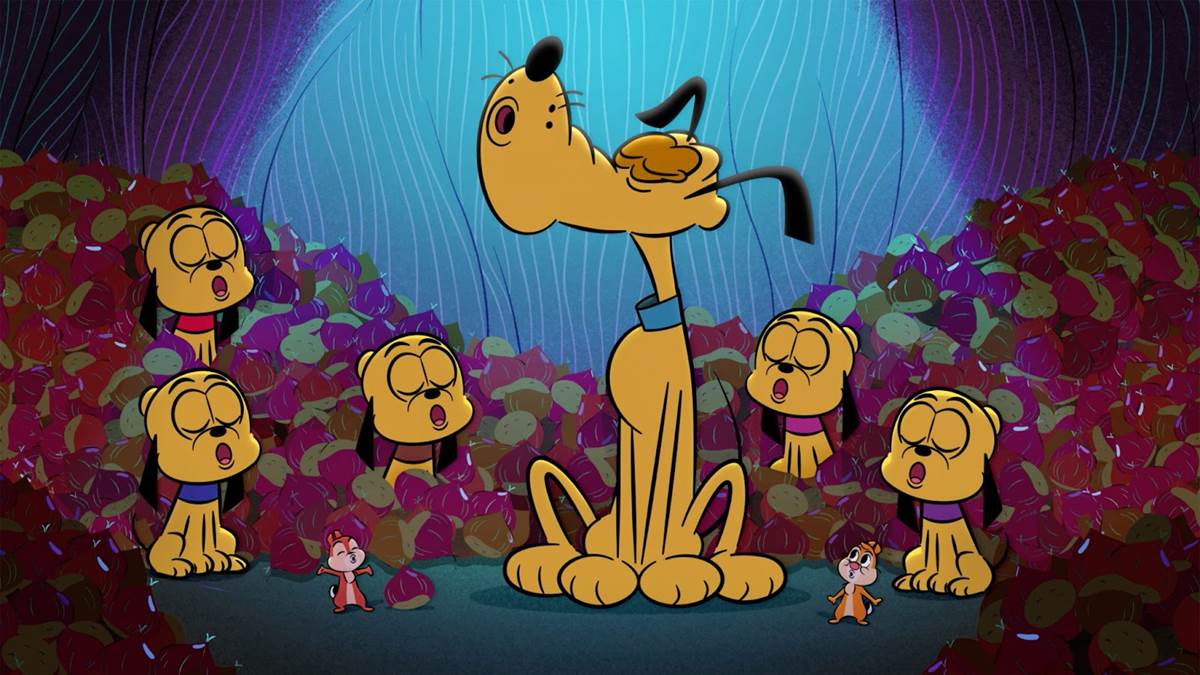