Season three of Disney Channel’s Amphibia kicks off with a special double-length premiere episode on October 2nd, with new episodes released on Saturdays through november 27th. At the TCA Summer Press Tour, Disney Branded Television hosted a presentation called “Diversity in Children’s Animation” that included Matt Braly, creator and Executive Producer, and Brenda Song, voice of Anne Boonchuy. Both shared insight into why Amphibia has been a meaningful experience for both of them and what it means for kids to see diversity in the show’s characters. 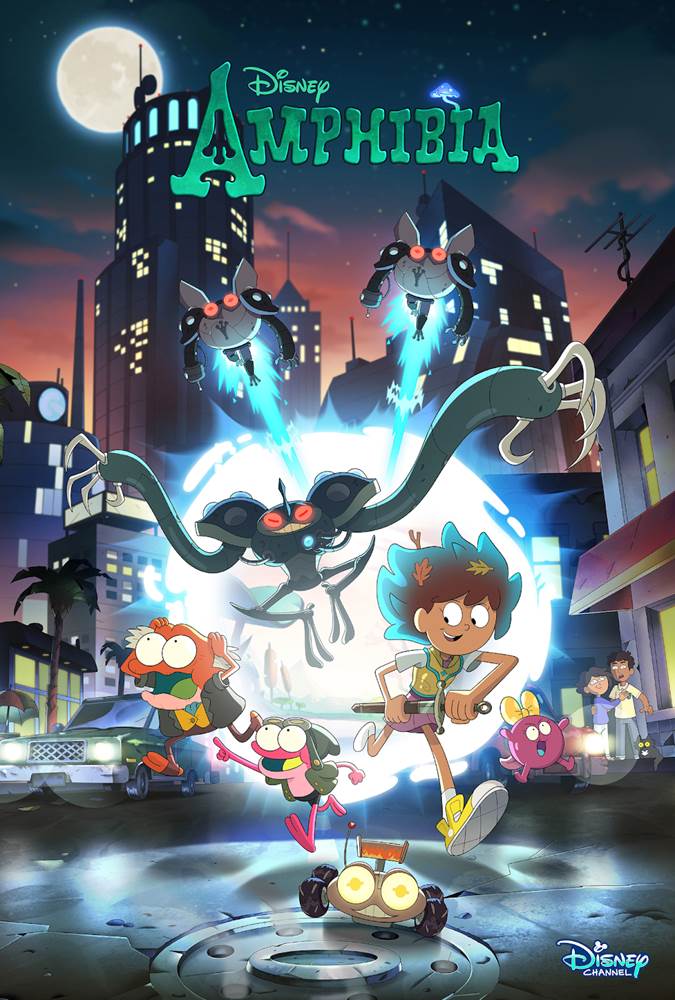 Inspired by Matt Braly’s Thai heritage, his family, and memories of childhood trips to Bangkok, this animated series about a girl who gets stuck in a world of frogs has more depth than is visible on the surface. “I grew up watching Jackie Chan films and loving them,” the series creator shared, adding that Disney’s Mulan was another film he watched on repeat. “I remember my mom being like, ‘You know you're not Chinese?’ And I was like, ‘What?’” Discovering this specificity of his own diversity was a turn point for Matt Braly. “When I got to writing and creating, it was absolutely a priority of mine to be specific where it's like this character is Thai and if I don't do it, no one will… It’s that kind of feeling of like you need to carry that forward as you write, as you create… What's also really crazy and awesome is that Brenda, Ashly [Birch, on the same panel representing The Ghost and Molly McGee], and I are all half-Thai. So Thai representation, we're killing it right now in this space, in this moment.”

Disney Channel has continued to expand diversity and inclusion in its content, but for Brenda Song, whose been working with the network since she was a kid, it’s always been that way. “They were already telling diverse stories back then,” she explained, her first DCOM having been released in 2000 before making a name for herself on The Suite Life of Zack & Cody in 2005. “Growing up as Thai-American, I didn't see myself on TV. And Disney started doing that really early on and being open to breaking those boundaries really early. So for me, it was so important because if I could sort of be that representation for my cousins and my siblings and all of that, I mean, that's all we can really ask for — because kids are so impressionable and what they see on TV is their kind of window to the world.”

Having been a staple of Disney Channel for the first half of her career, returning to the network also gave Brenda Song a rare opportunity that was meaningful to her. “Anne, she's the first Thai-American that I've actually ever played and we really delve into the character and the culture of being Thai for the first time,” she shared. “I'm 33 and the fact that I'm doing that for the first time says a lot. But I'm just so happy and proud to say that we're doing it now because it’s never too late. And it’s one of the things I love working about "Amphibia" is Matt, who didn't know I was Thai when I first booked this. He and I were getting to talk back and forth about it and connecting with that is exactly what’s so great about these shows… I just feel really grateful to be able to be a part of this and to be able to share and to be able to tell stories that hopefully kids can connect to regardless of where they came from or what they look like or anything like that.”

The diversity presented on screen in Amphibia is obvious, but what happens behind the scenes? “I was in charge of hiring a good deal of our staff and, whether it's intentional or not, I think a third of our crew ended up being Asian,” Matt Braly revealed. “We need to make sure that the crew represents the show being made.” Since the show also centers on a female lead character, Matt Braly wanted to have more women present on the series. “We made sure to stack the writers’ room and make sure that it was mostly female to get that perspective and hopefully to get it right. And on all our shows at Disney, I think they're doing a really good job.”

Brenda Song recently became a parent, making a project like Amphibia even more special to her. “Children just want to fit in and the fact that we're able to work on things to show children that it's okay to be different, it's okay to grow up with different kinds of food, to speak a different language, that all the kids in your class may not speak, to be proud of that is so important,” She concluded. “To work on shows that really highlight specific cultures, or just broaden this horizon for children to feel strong in who they are, to feel confident in who they are, to feel confident in their background, to not feel ashamed of it. Because I know for me, growing up not seeing myself mirrored on TV, I felt ashamed to bring certain foods to school. I didn't want to tell anyone that I spoke Hmong or Thai. It made me ashamed, and so to be able to work on programming that really uplifts that and shows that it's wonderful to be different, you should be proud.”

The fun, adventure, and representation of Amphibia’s third season kicks off October 2nd on Disney Channel.