The finale of Monsters at Work has arrived, and the emotions of leaving his new work family have overcome Tylor as he must choose between staying at MIFT or accepting his dream job of becoming a Jokester on the Laugh Floor. 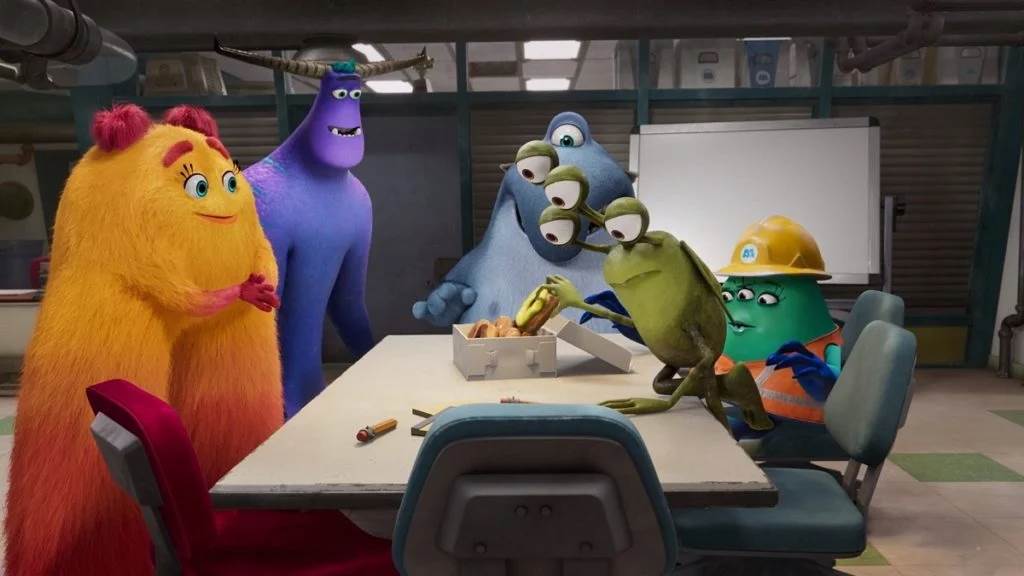 Monsters, Inc is almost at full steam with the conversion to cleaner burning laugh energy, and there is one spot still open on the Laugh Floor when the power starts to flicker. Roz appears in Mike and Sulley’s office, working for M.E.R.C. now and saying all power needs are being converted to Fear Co. To save the company (again) Mike inadvertently makes a deal saying they can generate a million gigglewatts of power by tomorrow to save the company.

Down in MIFT, Tylor presents the idea to build bigger laugh canisters to hold more power and save time switching them in and out. A good idea, so Cutter jumps in to build the prototype. Val is curious how Tylor is going to get all this done and still go to his comedy class when Tylor reveals to her (and the audience) that he is done trying to be a jokester. Devotees may recall that Ms. Flint told Tylor in a previous episode that he wasn’t funny and will never be a jokester. But wait! That’s her calling him on the P.A. interrupting the heartfelt conversation between Tylor and Val.

Tylor is pulled upstairs to the simulation room and shown a sizzle reel of his blunders auditioning, but then shown security footage from that aforementioned previous episode wherein he made all the monster children (including Ms. Flint’s daughter) laugh. He is immediately promoted to Jokester-in-training to help the company hit the million gigglewatt mark. Now we see Tylor, obviously torn, go through a series of conversations and heartfelt moments with Sulley and the MIFT team.

While warming up for his first day on the laugh floor, Fritz shows up and tells him there’s a surprise emergency that he needs to help with, and drags him to the MIFT office. There, the team throws a surprise party with David’s death cake that's a few years old, where everyone (even Duncan!) has some emotional words for him. Tylor decides he wants to use the Jokester-in-training day but then return to MIFT. Fritz, filled with glee, gets the box that contains the contents of Tylor’s desk that Cutter cleaned out, and he and Val realized he never got rid of any of his Jokester gear, still dreaming of the job.

Up on the Laugh Floor, Val volunteers to be his assistant since she knows how to run a door station, much to Tylor’s appreciation and pleasure. His first kid generates a bit of power, and the rest of the MIFT team is outside the door to cheer him on. With two minutes remaining, they realize that there are no canisters left and they are just shy of the million gigglewatt mark. Cutter brings out Tylor’s idea, the giant canister, and Mike has 45 seconds to save the company. Down to the wire, Mike saves the company.

But what of Tylor? If it wasn’t for his laughs and that big canister, Monsters Inc. would be shut down. Well, he gets officially promoted but as he goes to turn it down, Fritz stops him and hands him his original job offer letter (from the first episode) where he crossed out “Scarer” and wrote in “Jokester.” He also shows him his new desk that the MIFTers help set up, encouraging him to keep the new job. The MIFT team shows up, and they are waiting for his official laugh assistant, who has shown up already. It’s Val! She put in a transfer request with Celia who authorized the move. All in a day! Monsters, Inc. is efficient!

So now, we know that MIFT is down by two employees, Tylor is a jokester with Val as his assistant, and Monsters Inc. has now switched to the giant canisters (again, all in a day) and can generate more power than Fear Co. Seems like a good set up for a Season 2 right? Fritz hopes so too. Stay tuned during the end credits and listen for him.

This episode and the whole season of Monsters at Work is now available on Disney+.