runDisney in-person races are back and while I didn’t participate in the very first race (5K), I am here for the Wine & Dine Half Marathon Weekend! My morning started at the awful hour of 3:00am, and I have another early day tomorrow, but I’m excited to be back for the Wickedly Delicious 10K and Half Marathon races at Walt Disney World. After a long hiatus, runDisney has returned to offering in-person events with the Wine & Dine Half Marathon Weekend taking place from November 4th-7th. Over three days, Disney offers a 5K, 10K, and Half Marathon race and I’m recapping my experiences from the latter two. Today we’ve got the 10K featuring Jack Skellington and Oogie Boogie!

According to the weather app, this morning was supposed to be slightly chilly and dry until 8am, but my friends, that was not the case. It drizzled from the time we left our hotel at 3:30 am, all the way until 7am. Still we persisted! We arrived at EPCOT and parked in the Discovery section of the massive lot. From there we walked to the Monorail station for a ride to the Magic Kingdom Transportation and Ticket Center and then one more walk to the parking lot and our starting groups. 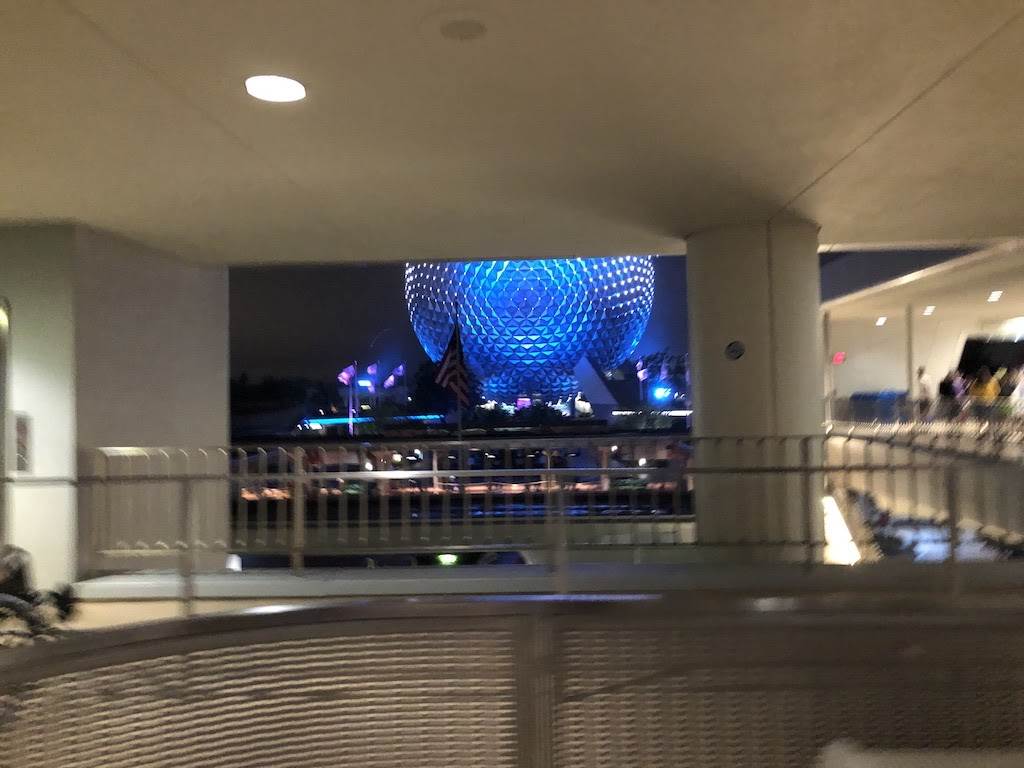 Upon reaching the destination, we found the health tents, Baby Care and two food trucks on the opposite side from the starting groups, DJ, Gear Bag Check and starting line. Fans could also take pictures with the Nautilus from 20,000 Leagues Under the Sea and The Queen of Hearts throne.

Everything was spaced out more than in previous years, and while the entire event was exciting, I feel that it lacked the energy of previous races. This is in no way a criticism, just an observation. I think with a smaller cap on the number of participants coupled with the cold, wet weather, everyone just wanted to hit the course and start their race. In the past, runDisney events featured starting corrals where runners were assigned to a letter (usually A-I or J), but this year Disney opted for four starting groups (1-4). Similar to the runDisney races at Disneyland Paris, runners were released in waves every 2-3 minutes. I didn’t keep track of the number of starts, but someone said there were upwards of 20. I don’t think it was quite that many, but easily more than a dozen. I was assigned to Staring Group 3 but hung back to run with Kyle who’d been placed in group 4. We were towards the middle-back of the group and probably the third or second to last group to set off. Villainous Characters and Elements on the Course

Aside from the annoying wind, rain and inevitable wet socks and shoes, our race was actually really good. We set a generous goal to finish that allowed us to do some jogging and plenty of power walking. There were long stretches with very little entertainment, but just before we hit the first mile marker, we spotted Maleficent off the road striking poses for some fans who wanted pictures. 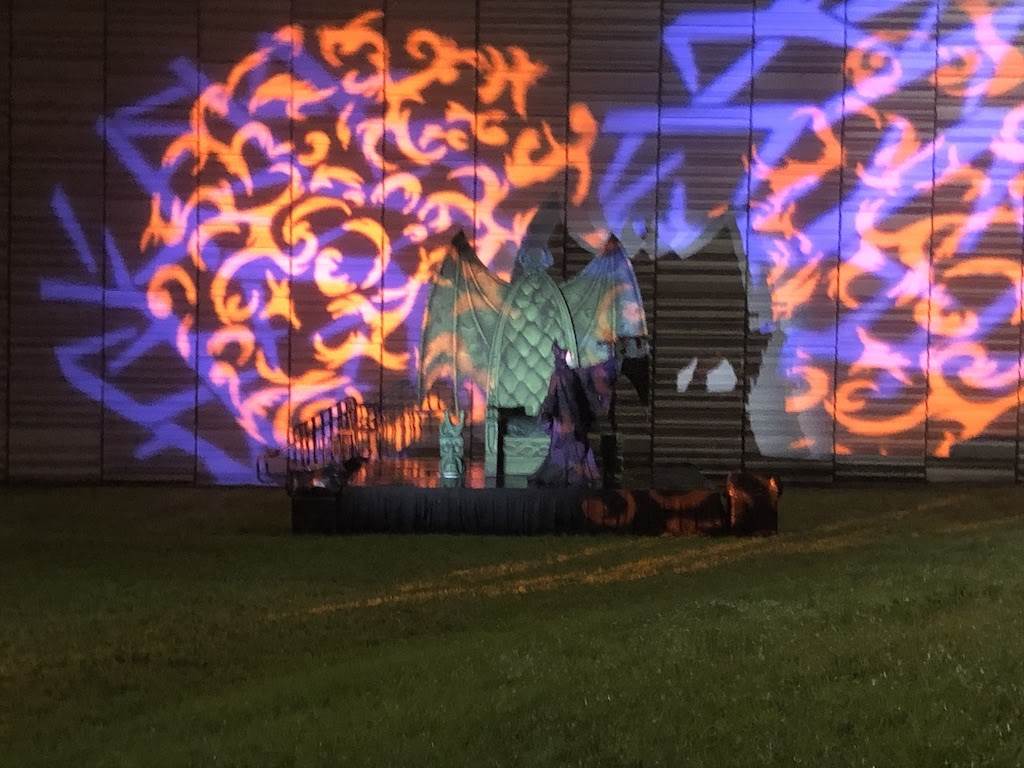 Further along the course there were giant screens playing movie scenes from The Nightmare Before Christmas, Snow White and the Seven Dwarves and The Little Mermaid. As for other villainous characters out and about, several baddies made an appearance including, Jack Skellington, Oogie Boogie, The Evil Queen in Witch form, the Big Bad Wolf, Governor Rattcliffe, and the Bowler Hat Guy.

There was also a photo spot with Chernobog, and each mile marker featured an evil character: Ursula, Scar, Oogie Boogie, Yzma, Madam Mim, and Syndrome.

As for one noticeable change, aside from the character photo spots, we didn’t see our first PhotoPass photographer until we reached Hollywood Studios. However, there were several photographers spread out across the last 2 miles with at least 4 on-course locations inside EPCOT. 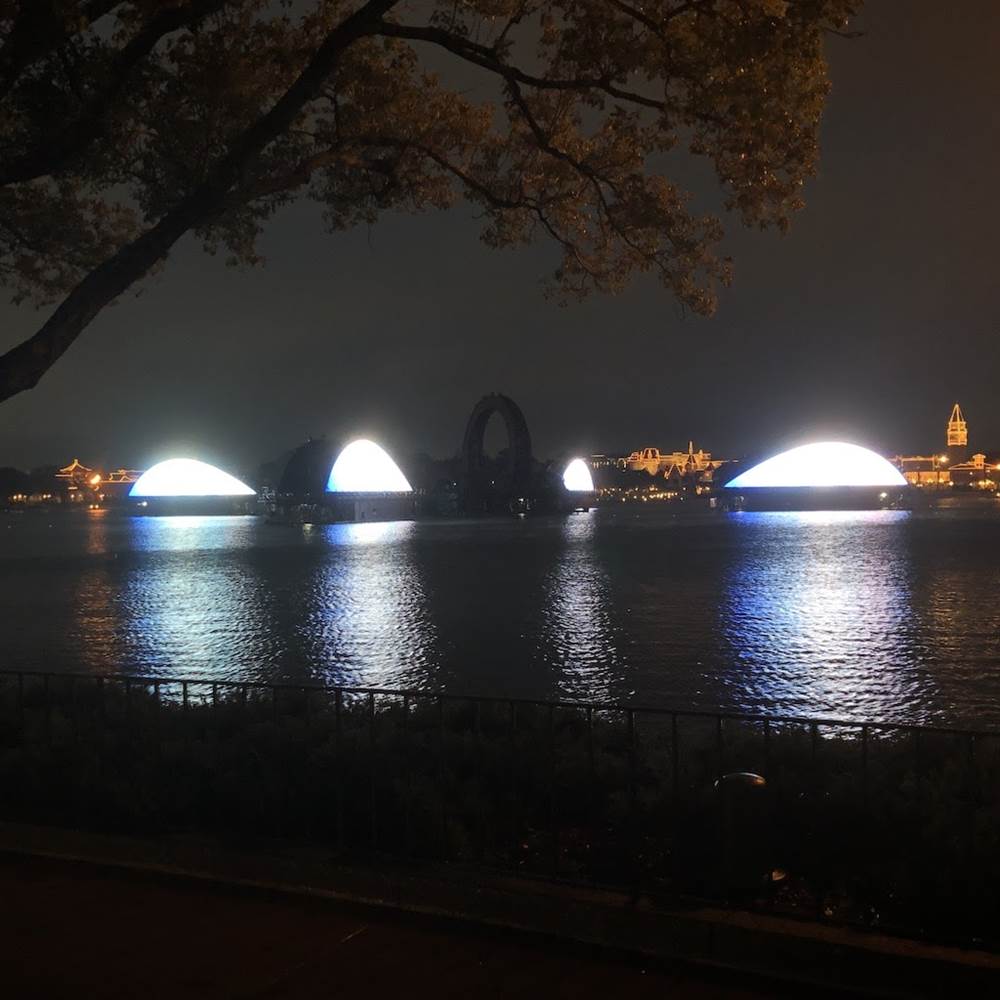 The "tacos" were aglow with the WDW "50" but you can't tell from my picture! We interrupt this race to bring you a photo of one of my favorite places, the BoardWalk

We finished our race in 1:29:57, far from our best time, but exactly where we’d hoped to be. After receiving our medals, we picked up water bottles, Powerade, snack boxes, and bananas before heading back to our car. 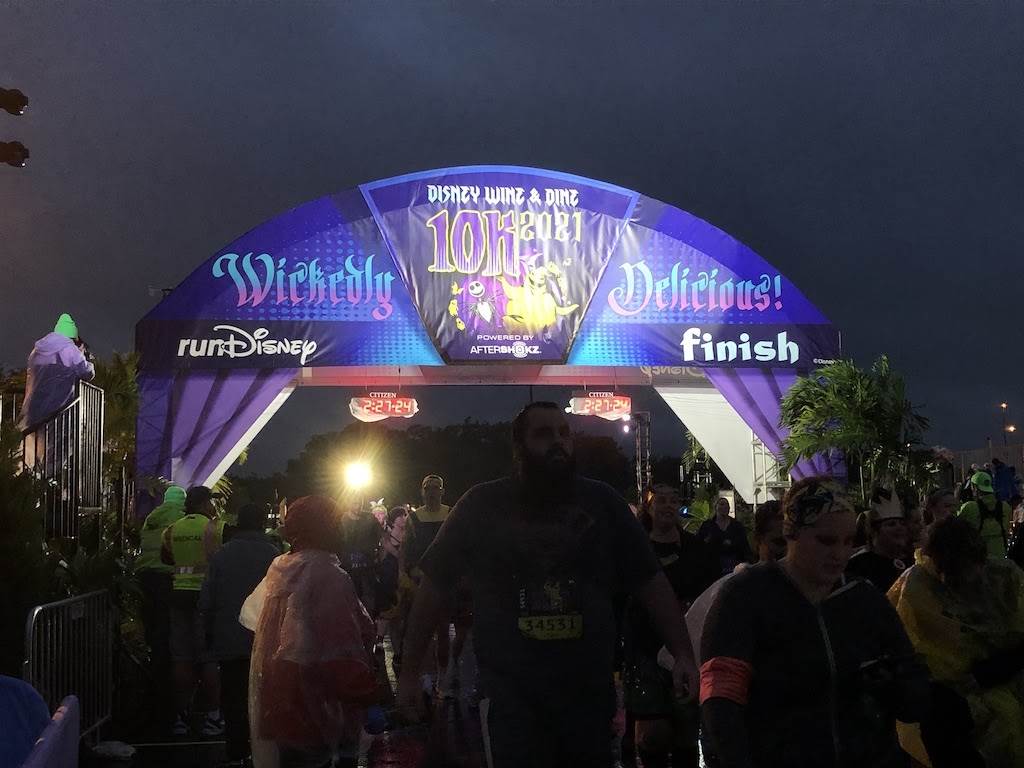 Guests could also take the classic post-race photo and/or pose with the Magic Mirror and the Evil Queen’s throne. There was also a tent with race merchandise and food for purchase including fresh fruit, pastries, and some adult beverages. 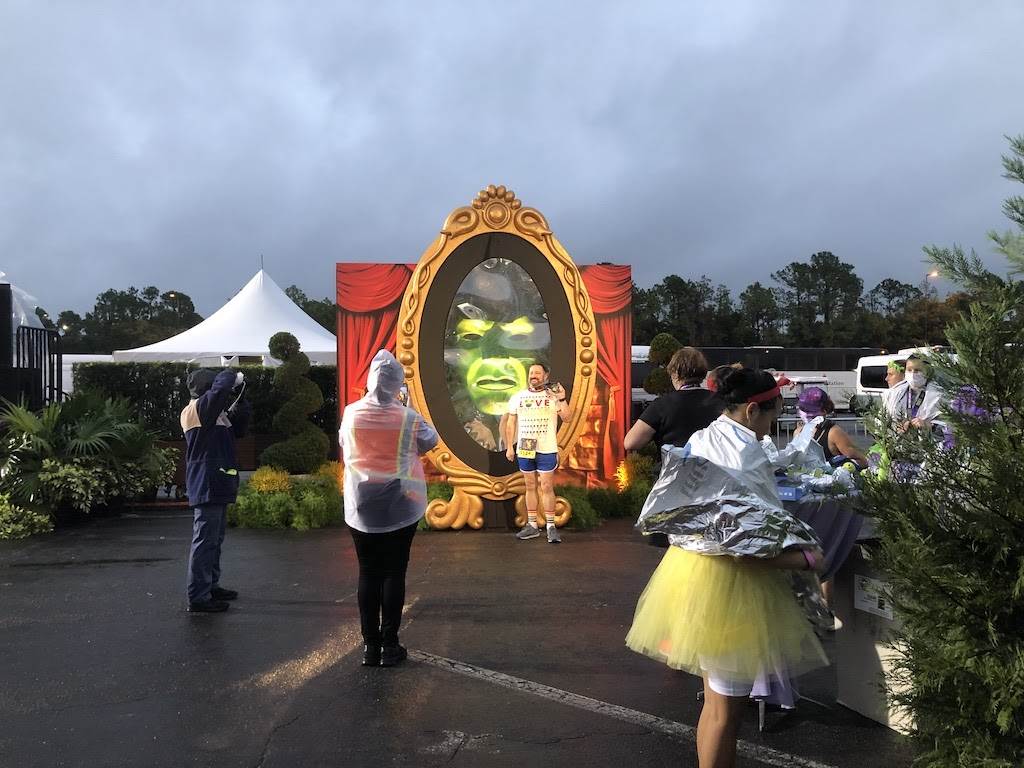 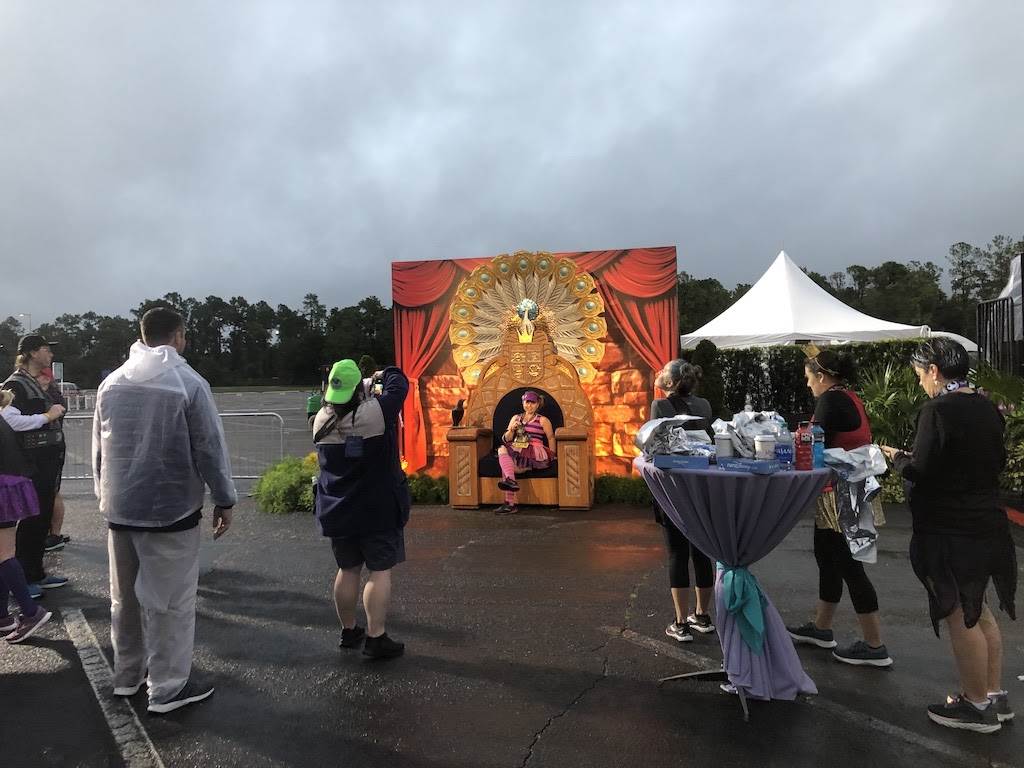 This event was a big deal for runDisney as it marked the first in-person race since the 2020 Princess Half Marathon Weekend. A lot of the entertainment and offerings did feel scaled back, but it didn’t feel like it was lacking the signature runDisney magic. Disney Cast Members and Second Harvest Volunteers were directing us where to go, handing out water cups and most importantly cheering us on.

Social distancing is not an option for races of this size and scope, so if you’re still on the fence about being around crowds of people then it’s probably best to avoid them altogether. Just like at the parks and resorts, runDisney did not inquire about vaccination status nor require guests to submit a negative COVID test. Disney did stress that masks were to be worn on Disney and race transportation as well as inside park restrooms. As for enforcement, one guest was turned away outside Monorail security because they didn’t have a mask, but another Cast Member was quick to locate one for the guest. There also appeared to be masks at the station should someone need one before boarding. Other than that, I can’t speak to mask enforcement but it seemed that most guests were happy to comply with the rules.

I felt safe in this environment and appreciated runDisney’s reasonable guidelines. That said, I’ve also not been too panicked throughout the pandemic, so take my comments with a grain of salt. I’m happy that runDisney is back and look forward to the Springtime Surprise Events that celebrate favorite races of the past.