Eric and Brianna are rushed to the hospital after being hit by an unknown shooter and the LAPD investigates the crime, starting with three likely suspects. Brianna is in critical condition and her mother and the girls have different opinions on the best care for her. A flashback shows the formation of Nasty B*tches way back in the late 80s/early 90s. 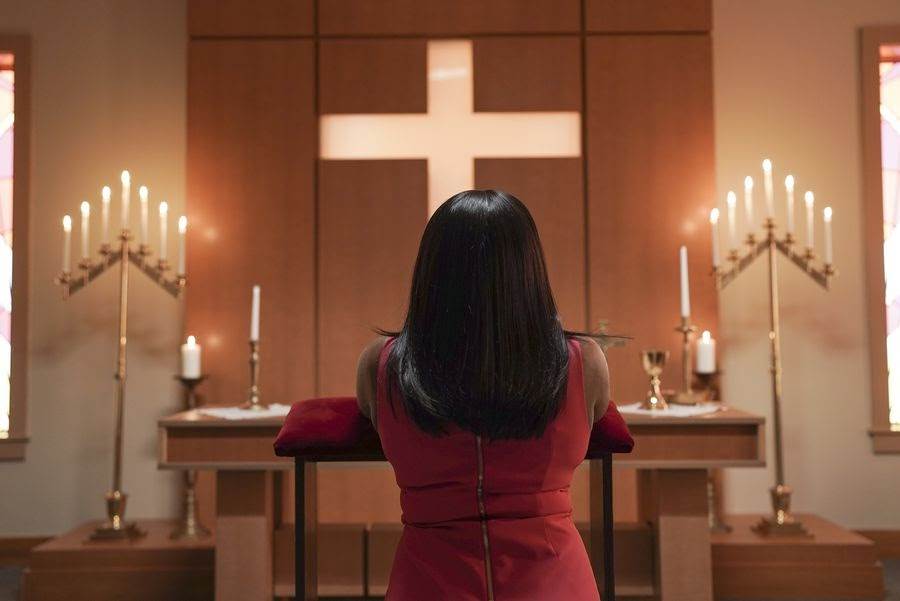 What should have been a happy night for Queens and Lil Muffin (Pepi Sonuga) and the reveal of their world tour billboard has been tainted by a mysterious shooter. The person hit both Brianna (Eve) and Eric (Taylor Sele) before running off. Ambulances arrive on scene and rush them to the hospital while Naomi (Brandy), Valeria (Nadine Velazquez), Lauren and Jill (Naturi Naughton) follow behind. A montage shows Jill reciting Hail Mary through tears and we can overhear the paramedics stating “no exit wound” in reference to Brianna. Local and national news reports on the shooting and a handful of fans come and leave candles and flowers outside the hospital entrance.

As the girls wait for any updates, Valiera is adamant that Brianna cannot die there. Jill thinks Eric will be ok but she’s not sure about Bree who was unconscious.

Flashback to the 1980s? 1990s? and our girls are in high school. Bree attends a Catholic school and meets Naomi through a tutoring program. She’s there to help Naomi with Shakespeare. Naomi would rather study music, flow, any rhymes and to her surprise, Bree raps a few verses of the legendary playwright. They laugh and their friendship is cemented.

Detective Martin Wilson from the LAPD comes by the hospital and talks to the girls. They’re more concerned about Bree than answering questions, but he wants to help them find out who attacked their friends. He asks if they have any enemies or know someone who would have a motive. Jill mentions her visit from Tina who said, “your day of reckoning is coming.” Val worries it was Valentina, the woman pretending to be her mom, who threatened to cause trouble if Val went to the police, and she did. Lauren tells what she knows that the others don’t, Eric owes Jadakiss money and he wants to collect.

After talking to the detective, the girls ask for an update on their friends, but for legal and privacy reasons, the nurse won’t tell them anything. Naomi mentions that Eric is her daughter’s father and they learn that he’s out of surgery and stable. The mention of kids reminds Val that Bree’s children are still at home and she goes to get them. Meanwhile Naomi talks to Eric and gives him the lack of updates. She asks if he’s having money troubles, but he denies it.

We flashback to high school and Bree has invited Naomi over. Turns out her mom has invited someone over too, a nice girl from Bree’s school named Jill. Bree isn’t happy, but Jill is as cheerful and charming as ever and wants to hang out.

In present day Bree’s mom has arrived at the hospital and gets the update that her daughter is out of surgery and on life support. The kids want to see her, but she’s too scared to go back. She gives the ok for Val to take the kids to Bree.

Another flashback shows Bree and Naomi working on their flow while Jill watches, impressed. She’s loving what they’re doing and when the moment feels right, jumps in with her own verse. She’s good and the girls are pleasantly shocked.” I love Jesus and hip hop!” she tells them.

At the hospital the kids are asking Val all the tough questions about their mom, and she answers as honestly as she can, assuring them their mom is in there and loves them all…whether she can stay or has to go.

Detective Wilson pays Eric a visit and mentions that Lauren thinks he had an altercation with Jadakiss. Eric is tight lipped but he’s clearly struggling with his secrecy because he knows this doesn’t just affect him.

A doctor comes to give the update on Bree. She was shot in the chest and has damage to her spleen, liver and spine. Bullet fragments in the spinal canal have caused extensive damage to her spinal cord and as of now, she has no function below the neck. They can perform a second surgery to remove fragments and hopefully restore mobility, but Bree’s mom doesn’t want them to touch her again. “Don’t hurt her anymore. Let her be alive.”

Detective Wilson can confirm that the shooter is not Tina—she was elsewhere at the time—and it’s not Valentina either, but they have her in custody to send her back to Wisconsin.

We flashback again to see the trio has snuck out to perform at a local club hoping to win a showcase. Jill asks what their name should be, but Naomi doesn’t care, she just wants to rap. She tells Jill if she thinks of something by the time they arrive, they can use that. Lauren goes to see Eric, bringing him a huge Get Well Soon bear. He’s not happy she told the detective about Jada, saying they live by hip hop rules. “Not when Bree might die.” Scared by Bree’s mother’s refusal to give her daughter additional surgery, Naomi comes by Eric’s and says she wants to put his name on Jojo’s birth certificate. He wastes no time telling her that he wants that too. They kiss, but it’s not clear if this will lead to more.

With Valentina (Elaine Del Valle) in police custody, Val talks to her and asks why she didn’t steal anything from her. Valentina says that would be too easy, living as her mother was the true con. Val asks about her mom and Valentina confirms it was Rosalind but that she’s been dead. “Hire me a lawyer, I’ll tell you everything.” Val is disgusted and gets up. Valentina says Rosalind was proud of her daughter. Val walks out.

Another flashback shows the girls arriving at the club and begging to go on. They had to sneak out and they traveled all the way all the way from Queens! Bree spots her mom at the club and insists they go on next. The emcee finally agrees and lightheartedly says, “you’re nasty little bitches.” In the hospital the girls talk to Bree and tell her to keep fighting. A nurse recognizes them and comments on how great it is to see celebrities who are so close in real life and this encourages them to confront Bree’s mom. She’s still holding on to the hurt that her intelligent daughter chose music over education. Naomi asks if this is honestly what she wants for Bree, to be paralyzed from the neck down when should be actively raising her children? Naomi believes she will be fine if she gets the surgery. Jill says they may not be blood but they are family. Bree would want surgery.

Bree’s mom has a change of heart and as her daughter is wheeled out for another surgery, we flashback to their first performance. The emcee announces a change to the lineup and puts girls on stage. “What are you called?” Naomi looks at the others then says, “Nasty B*tches.” The club loves them. After their performance, Bree’s mom drags them out, but before they drive away, Eric follows them out and says they have something special. He wants to work with them.

Jadakiss comes to see Eric at the hospital and says he wasn’t responsible for the shooting and doesn’t like being on the LAPDs radar. He tells Eric he’ll wish whoever did this had finished the job.

Jill prays in the hospital’s chapel when Darren (Emerson Brooks) suddenly appears next to her. She’s confused as to why he’s here and he reminds her about how she said God had a plan for their baby. “It’s God’s plan for us to be together,” he says smiling. “That’s why the bullet didn’t hit you.” As Jill realizes what this means, Bree starts crashing during her surgery. The doctors can’t stop her bleeding. 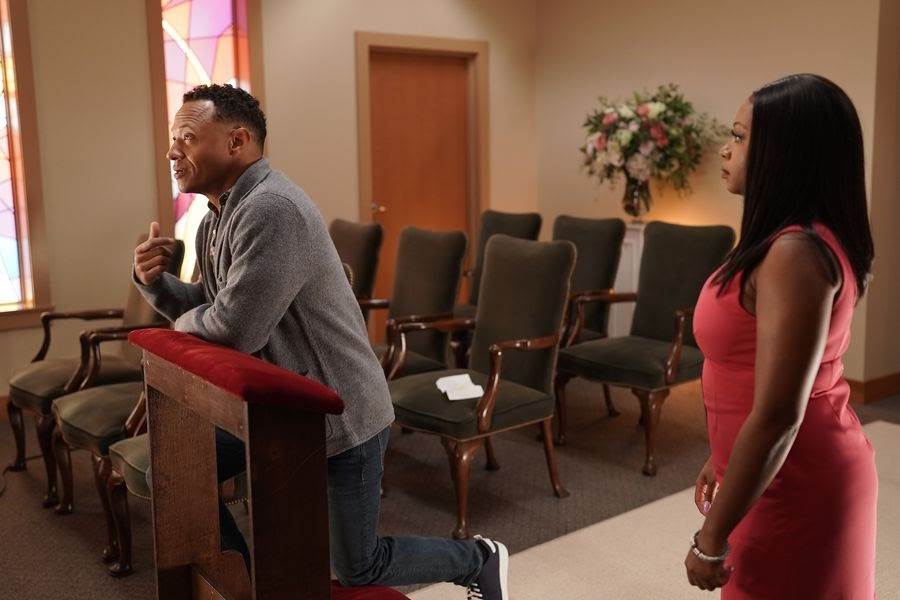 Back in the chapel, Darren chokes Jill and he’s overpowering her. She grabs something heavy off the altar and hits him. The girls and Detective Wilson rush in. Darren is unconscious, but he’s alive. Bree however flatlines. The doctors rush to restart her heart. “Clear! Clear!” Queens fans hold vigil outside the hospital where a large collection of flowers, posters, and small gifts now sits. It’s quiet for a long moment, and then we hear a heartbeat.