“The Wonderful World of Wookiees” isn’t a Star Wars-themed overlay of World of Color, but the name of a panel from Star Wars Celebration. Hosted by Amy Ratcliffe, the hour-long presentation honored the life and legacy of Peter Mayhew (the original Chewbacca) while examining why we love Kashyyyk’s biggest stars so much. Don’t worry, the panel was in English, not Shyriiwook, so I am able to recap all of the events for you. 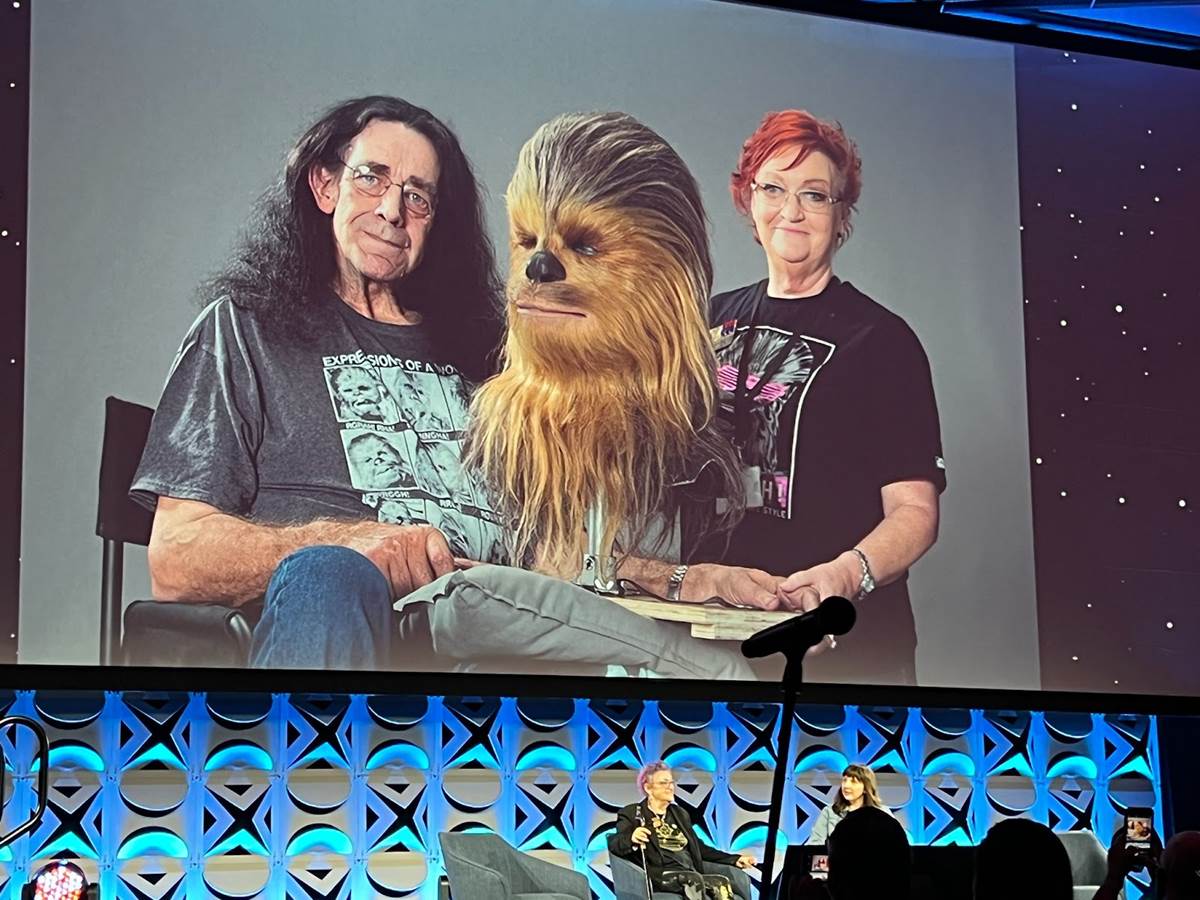 “I really can’t tell you how much love Peter had for you,” Angie Mayhew gushed at the start of the presentation. She is carrying on the mission started by her late husband with the Peter Mayhew Foundation, a charity that provides toys to kids with cancer in hospitals. The room was emotional as Angie played a video that was created for Peter’s memorial, in which Mayhew talked about how playing Chewbacca helped him overcome his own insecurities about his height. He was working in a hospital when George Lucas cast him as the first Wookiee to enter our lives, making his foundation all the more relevant.

“Peter was Chewbacca,” Joonas Suotamo said, who began his Star Wars journey by sharing the role of Chewbacca with Mayhew in Star Wars: The Force Awakens. He talked about trying to adopt Mayhew’s movements and mannerisms, with one of the most difficult parts of his job being close-up shots where acting with his eyes becomes key to getting Chewie’s feelings across. When Joonas receives a script, it often just states something simple like “CHEWIE ROARS,” so he has to fill in the blanks. He makes his own Wookiee sounds (and sounds good doing them!) but is ultimately speaking a Wookiee-version of English on set, later dubbed over.

Carey Jones is the newest Wookiee in the Star Wars family, portraying Krrsantan in The Book of Boba Fett. The character was first created by Marvel Comics in 2015 and Carey read every graphic novel he appeared in to prepare for the role. Unlike Joonas, Carey had the freedom to create Krrsantan’s movements, but he drew a lot of inspiration from the comic panels. Diehard fans may even recognize moments in the series where Carey Jones recreates a frame from the comics. When the casting news was first announced, Angie Mayhew was among the first to reach out and congratulate him, welcoming him into the Star Wars family. Author Charles Soule recently introduced a Wookiee of his own creation to the universe through The High Republic. Set before Kashyyyk was enslaved, Burryaga Agaburry is a force-sensitive Wookiee whose greatest strength is his ability to empathize. Since Burryaga’s story is told through writing, Charles Soule doesn’t have to worry so much about the limitations for Wookiees to communicate on-screen (Shyriiwook is never subtitled). One moment in The High Republic: Light of the Jedi in which Burryaga is the only one capable of communicating with a species was inspired by Charles’ own interactions with members of his family on the autism spectrum. Burryaga’s lightsaber is the last tool he reaches for during a conflict, but it is a special piece with a hilt made from a tree on his home planet. When asked if Burryaga survived the events of The High Republic: The Fallen Star, all he could say was “Let’s hope so.”

During a Q&A at the end of the panel, someone asked Joonas Suotamo if Chewbacca ate the Porg he was cooking in Star Wars: The Rise of Skywalker (the cameras cut away when he made eye contact with a surprised-looking Porg). “I can’t remember what sauce I used,” he joked before admitting that Chewbacca felt too much guilt to go through with it. But he remembers that scene as being a lot of fun to film. Charles Soule was asked if we will see any Wookiees in Phase II of The High Republic, which is set 150 years before the events in Phase I. Not only will there be more Wookiees in The High Republic, but there will also be a baby Wookiee! Look out, Baby Yoda! 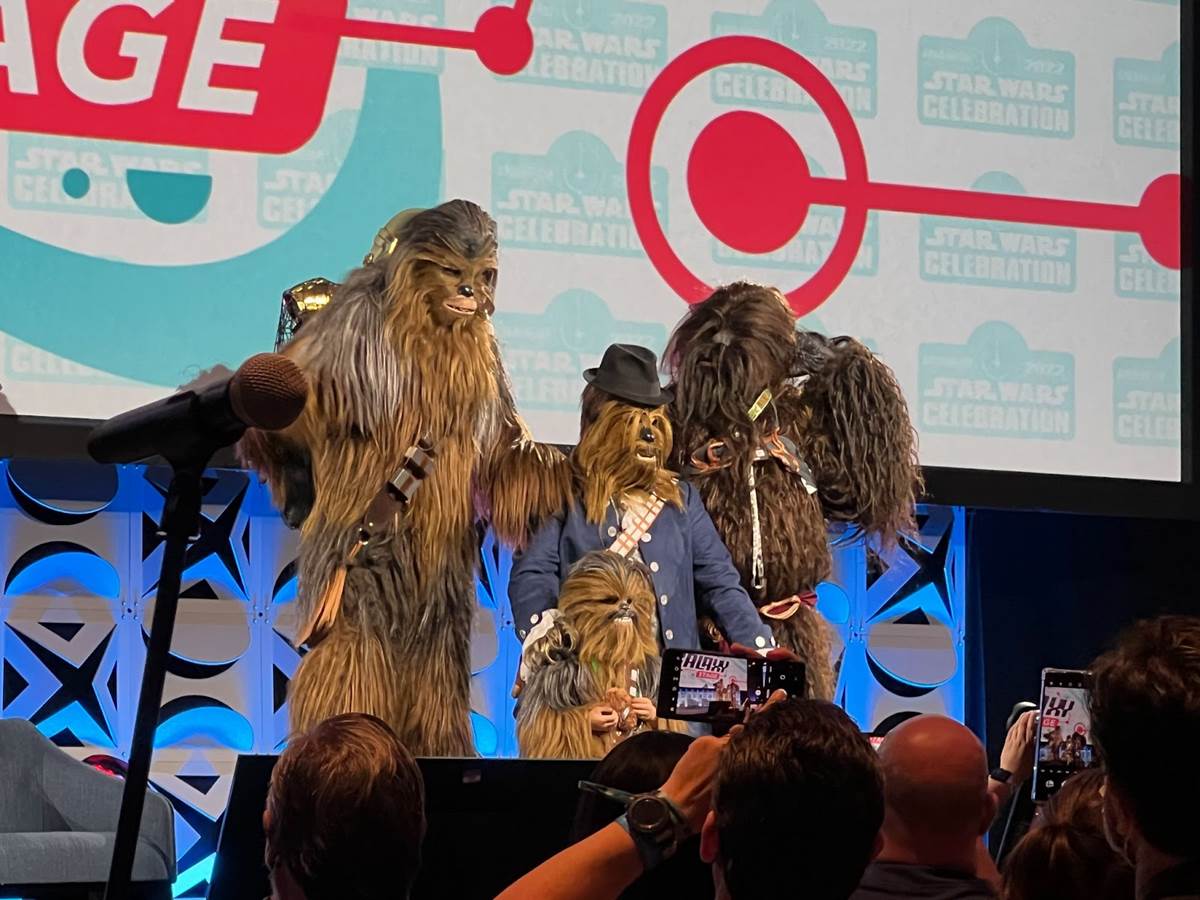 Oh yeah, and while we waited for the panel to start, attendees in Wookiee cosplay were invited up on stage for a group photo. Here’s Chewbacca with a young Wookiee, a dapper Wookiee, and a Wookiee wearing Leia’s Huttslayer outfit.