Hulu has revealed all of their July 2022 new additions, including original series like Season 3 of Solar Opposites and Season 2 of American Horror Stories, new movies The Princess and Aftershock, plus lots of movies and TV shows you won’t find anywhere else. Here’s everything coming to Hulu next month. 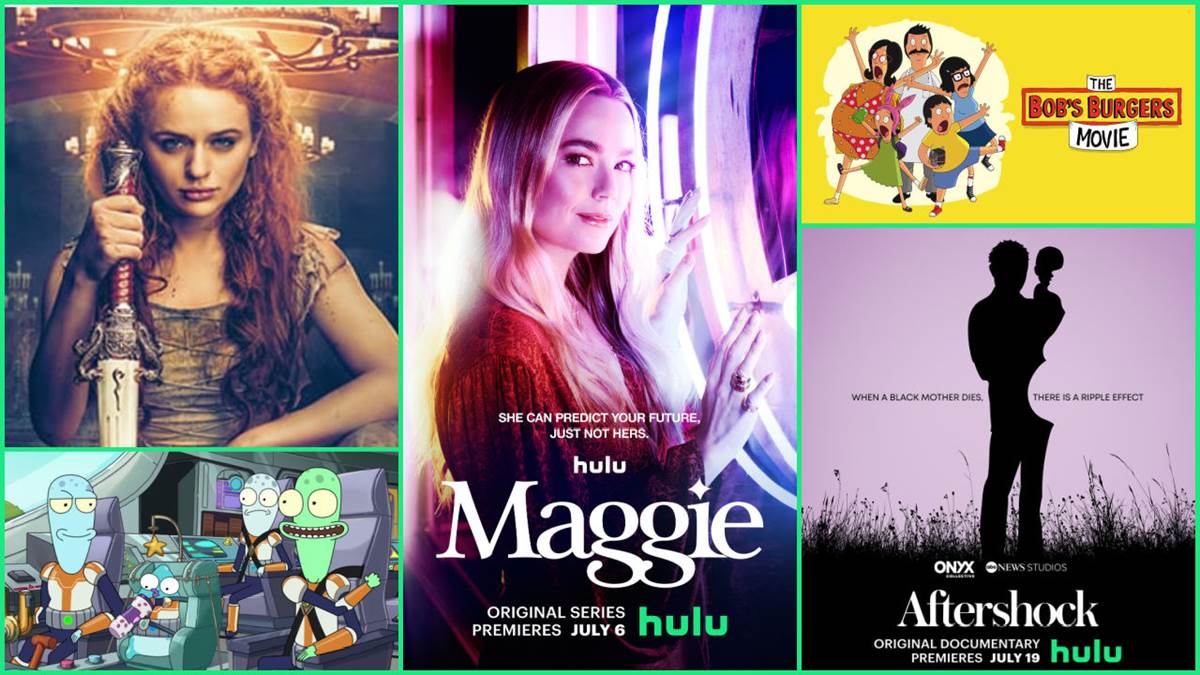 When a beautiful, strong-willed princess (Joey King) refuses to wed the cruel sociopath to whom she is betrothed (Dominic Cooper), she is kidnapped and locked in a remote tower of her father’s castle. With her scorned, vindictive suitor intent on taking her father’s throne, the princess must protect her family and save the kingdom.

Dating is hard enough – it’s even harder when you also happen to be a psychic. Maggie’s gift allows her to see into the future of her friends, parents, clients and random people on the street. But when she begins to see glimpses of her own destiny after meeting an unexpected stranger, her romantic life suddenly gets a lot more complicated. Can you let yourself fall in love when you think you know how it ends? She probably should have seen this coming…

Co-created by Justin Roiland (“Rick and Morty”) and Mike McMahan (“Rick and Morty,” “Star Trek: Lower Decks”), “Solar Opposites” centers on a team of four aliens who are evenly split on whether Earth is awful or awesome. Korvo (Justin Roiland) and Yumyulack (Sean Giambrone) only see the pollution, crass consumerism and human frailty, while Terry (Thomas Middleditch) and Jesse (Mary Mack) love TV, junk food and fun stuff. In season three, this alien team strives to be less of a team and more of a family.

Investigated with journalistic rigor, Matt Tyrnauer directs this searing and provocative story of the Victoria’s Secret brand as well as their then CEO, the larger-than-life, enigmatic billionaire, Les Wexner. The underworld of fashion, the billionaire class, and Jeffrey Epstein are all revealed to all be inextricably intertwined with the fall of this legendary brand in "Victoria’s Secret: Angels and Demons."

Following the deaths of two young women due to childbirth complications, two bereaved families galvanize activists, birth-workers and physicians to reckon with one of the most pressing American crises today: the US maternal health crisis. Directed and Produced by Paula Eiselt and Tonya Lewis Lee. Aftershock, a Hulu Original Documentary from Onyx Collective and ABC News, premieres July 19th on Hulu.

“Santa Evita” is based on the best-seller of the same name written by Argentine author Tomás Eloy Martínez, and follows the intriguing story of Eva Perón’s embalmed body, which remained unburied for three years awaiting construction of a monument that was never completed. In 1955, a military coup in Argentina overthrew President Juan Domingo Perón and hid Evita’s body for 19 years to prevent it from becoming a symbol against the regime. Before her death, Eva had become a powerful political figure as General Perón’s wife, and her wandering unburied corpse haunted the country’s political arena for over two decades. “Santa Evita” is the story of a corpse with no grave and the legend that was born from it.

“Not Okay” follows Danni Sanders (Zoey Deutch), an aimless aspiring writer with no friends, no romantic prospects and — worst of all — no followers, who fakes an Instagram-friendly trip to Paris in the hopes of boosting her social media clout. When a terrifying incident strikes the City of Lights, Danni unwittingly falls into a lie bigger than she ever imagined. She “returns” a hero, even striking up an unlikely friendship with Rowan (Mia Isaac), a real trauma survivor dedicated to societal change, and scooping up the man of her dreams, Colin (Dylan O’Brien). As an influencer and advocate, Danni finally has the life and audience she always wanted. But it’s only a matter of time before the facade cracks, and she learns the hard way that the Internet loves a takedown.

New On Hulu in July