Welcome back for another recap of Freeform’s Motherland: Fort Salem. This is it. As the Camarilla attack, the Army fights to take back Fort Salem and Alder finds the answer she’s been looking for, but is it in time? Will the Bellwether Unit live to see another day? Stap in, folks we’ve got a lot of ground to cover. The Camarilla have made it to Fort Salem, and worse yet, to the Mother. Fortunately, Raelle (Taylor Hickson)  is ok for the moment but she is weak. Having left the campfire, the group continues in the woods and meets up with Petra, Sterling (Luc Roderique) and Anacostia (Demetria Mckinney) who’re all dressed for combat. Petra (Catherine Lough Haggquist) says the Camarilla picked the perfect time to attack, as half the Army is still in the Cession. She confirms that the Camarilla are here for the Mycelial chamber and Necro unit, and that more troops are moving their way. Raelle insists she’s up for the fight. This is it, one last hurrah for the newly expanded Bellwether Unit. “For Goddess and Country,” Tally (Jessica Sutton) says.

Izadora (Emilie Leclerc) is alive! The near critical cut on her neck is bandaged and she’s strapped to a chair, while Penelope has been locked in the glass chamber where she first took corporeal form. The Camarilla injects Izadora and Hearst (Bob Frazer) tells her they have a lot more in common than she realizes. He goes over to the chamber and starts to antagonize Penelope causing her to scream and back to turn vapor. Her essence is collected in a jar and he orders someone to store it in their facility offsite. He asks a now drugged Izadora about the Mother, wondering if she’ll shrivel or pop. “She’ll kill you all,” Izadora says then starts laughing.

Still on the hunt for the remaining Steward of the First Song, Alder (Lyne Renee) arrives in Elmina, Ghana. As she walks around a bustling market, she looks to the sky where storm clouds are moving. A strange singing can be heard followed by a small explosion. Everyone starts running and then freezes in place. A military man in uniform comes around the corner, singing. He’s not happy to see Alder returned from the dead. She says the storm is not hers. “Yet you’re here,” he observes. “Am I?” she asks, as she touches a wall and disappears into the Mycelium network.

At Fort Salem, the group will split up taking to the grounds and the Necro building. The Bellwether Unit needs scourges since they won’t be able to use work. Before they go, Anacostia takes a moment to tell the trio she’s proud of them and their “odd, beautiful, precisely perfect combination of your talents.” Everyone saw and knew it from the start. “Never doubt that, never doubt what you are,” she says. She smiles and nods to Scylla (Amalia Holm), “and look out for that one.” Scylla hugs her, then one last group hug. 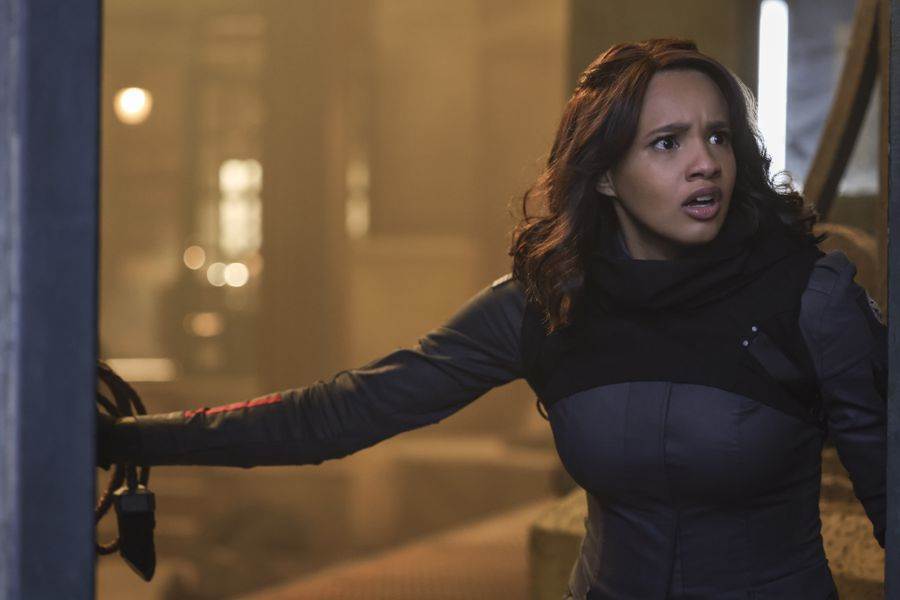 As the Bellwether Unit (plus Adil and Scylla) gather supplies and suit up, Tally tells them about her good time with Gregorio (Praneet Akilla) or “Greg” but the girls tease that she’s not the only one. He joins them moments later and makes eyes at Tall, they’re a thing now. He leaves to meet up with Petra’s team. The Unit moves out and Abigail and Adil (Tony Giroux) use their scourges to attack Camarilla guards while they discuss their honeymoon plans. He’s never been to the ocean.

Outside, the Camaila set strategically placed charges in the ground as a company of reinforcements arrive. Petra’s team (Ana, Sterling, Gregorio) discuss their options and decide on a quick attack to take out the Camarilla before they know what’s hit them. Gregorio suggests the “Rings of Saturn” and the group starts singing. The sky swirls and a large funnel cloud touches down moving through the troops, devouring bodies. One soldier on the run hits his vest and everything goes silent. It’s just enough of a distraction that when the sound suddenly comes back, there’s no time to react. A military truck hurtles towards Team Petra and Anacostia hisses at her friends pushing them back. The truck slams her into a wall. She’s gone instantly. Sterling begs her to wake up and Petra says they can mourn later. She tells Gregorio to get to her daughter.

The Bellwether Unit moves through the tunnels o the Necro building. Gregorio catches up with them and says the Camarilla tech can kill all sound but it’s still glitchy.

At the National Library of Jamaica, Kingston Alder reads ledgers with tracking the arrivals of slaves. One mentions a fiesty 19 year old girl from Ghana who’s said to be some kind of witch. Alder pauses; she seems to have found the line and it leads to Roanoke, Virginia.

Sterling disguised as a Civilian Oversight officer marches Petra through the Necro building. They take out the two officers transporting the jar with Penelope’s vapor. Petra tells Sterling to get it to Izadora, she'll know what to do. Before he leaves she says, “I know you loved Anacostia. I did too. We fight for her.”

The Trio makes it to the Necro lab, but the Camarilla aren’t far behind. The sound cuts out and they call out to each other, but everything is muffled. Hearst comes in, he’s the only one who can speak. “We found our voice,” he says, then tells them they interrupted something very important. He looks at Raelle and asks if she has a fungal infection. He presses a small device and the outside charges activate. Raelle collapses as the Witch Bomb starts to emerge and hits Scylla and Adil. Across the world Alder feels it too and cries out in pain. Hearst is a bit surprised by the results and calls it a happy accident. An angry Tally takes out guards with her scourge and Hearst leaves, the sound returns.

The attack on the Mycelium is affecting Alder who’s hair is once again changing color. She’s arrived at her next destination, an old, abandoned plantation.

Tally and Abigail take charge and fight off the Camarilla while Adil, Scylla and Raelle head to the Mother. Tally tells Abigail if what happened to Raelle happened to Alder they don’t have much time. Raelle is going to end the world and everyone dies. She says it’s so much bigger than them. Gregorio returns just in time to fight as another group of Camarilla enters and cuts the sound. As the girls and Gregorio fall back, a swarm of bats flies in taking out the Camarilla while simultaneously delivering Nicte Batan (Kandyse McClure). She said Wade sent her. Tally hugs her, and explains their situation. “We’re trapped.” 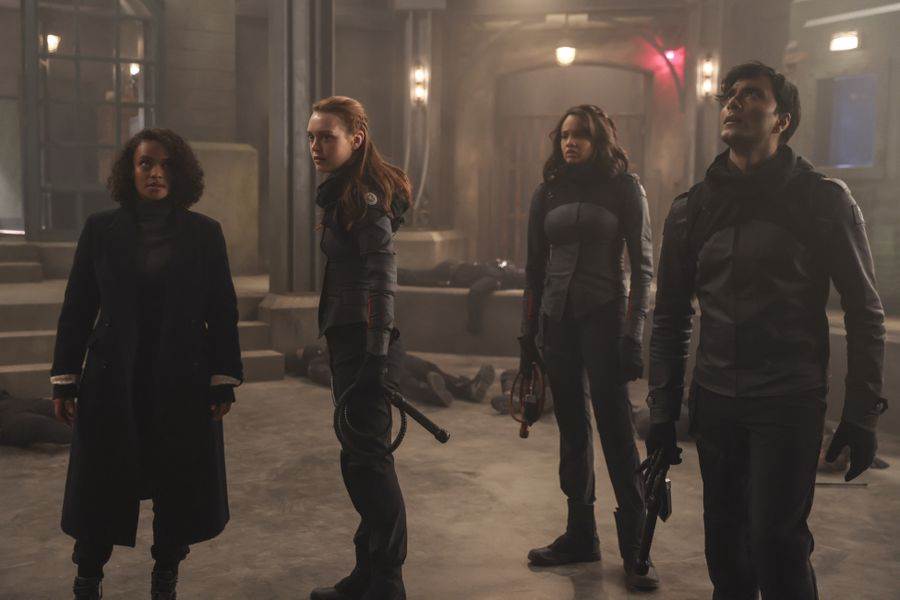 Inside the Mycelial chamber, Raelle gathers herself and approaches the Mother. She sings and the Mother opens for her, creating a passageway. Nicte and Gregorio will stay behind and hold off the Camarilla. The trio and their spouses enter the Mother, and it looks just like Tally’s vision. Suddenly Scylla and Adil collapse and Raelle can’t heal them. Tally calls out to Alder in despair.

“Are you sure this is going to work?” Blanton Silver (Victor Webster) asks Hearst about his live television address. He’s positive. The cameras roll and Silver speaks to the nation as the “rightful president” claiming that Wade is an imposter. He buried the real one. A disguised Sterling approaches Izadora and gives her the jar with Penelope. “Make them pay,” he whispers.

Inside the Mother, both groups of spouses have a chat. Adil tells Abigail she’ll need to break the link. “Let me go when it’s time.” Abigail says they’re going to get him to the ocean. Raelle lies on a raised bed of Mycelium and holds Scylla’s hand. She says they should have stayed at the lighthouse. Then she asks why she was chosen for this. Scyalla says she’s the only one who can bear what’s to come. Tally interrupts saying she understands now, it’s about the three of them. Everything is going to happen as she saw, but this is about how they change it. The Mother wouldn’t bring them this far for nothing, right?

Alder explores the abandoned house where she finds an old journal. She reads about Jem (Abigail’s ancestor) who can sing two elements at the same time, earth and sky. There is however, one song Jem won’t sing that has been passed on for generations from the women in her family. It’s to be saved for a precise moment in time and has the power to break or remake the world depending on how it’s sung.

During a broadcast break, Heast tells Silver he was masterful. Izadora offers the Camarilla some coffee and Hearst indulges. He encourages Silver to talk about his relationship with President Wade and how Alder is attempting to start WWIII in Ghana. He helps himself to another cup of coffee. The Broadcast resumes and moments later the Witch Plague takes over Hearst until only Penelope remains. Silver tries to apologize to his daughter and says he was forced to watch them inject her. He says he’s sorry and he loves her. She’s sorry too, then hugs him until the Witch Plague consumes them both.

The Stewards of the First Song (Alder, Khalida (Kylee Brown), Noodin) arrive at the Mother and Alder tells Abigail “your family’s stewardship was taken from you, but the song lives on in you.” Tally tells Raelle what’s about to happen and when they sing she should send the song everywhere. The group sings and Raelle sends forth the song covering the world. As it ends Raelle is fine, but Scylla and Adil aren’t. She grabs their hands, healing them. The family units embrace while Alder gives Tally an affectionate side hug.

At Fort Salem, everyone steps outside to their new world. Petra tells them about Anacostia and those nearby join in as they take a moment to honor her. Alder asks if Nicte will step aside so they can chat while Petra turns to Abigail and asks what they did. Abigail says she’s fairly certain they changed everything. They look to the sky which is glowing and swirling orange and pink.

Alder hands Nicte (Arlen Aguayo Stewart) a lighter and she changes her face back. “I’m sorry for what I did.” Nicte offers her own remorse, “I’m sorry I wasted so much time hating you instead of enjoying life.”

Tally’s sight is back and now she can see so much more.  A helicopter takes Alder and the Bellwether Unit to the sky so the others can see what Tally's enjoying. Alder asks them to listen carefully, the Mother wants a word. She speaks through Alder, saying a long time ago, she merged with six women—the first witches. They were feared, but now everyone can have the gift, yes, even the Camarilla. Everyone is a witch and they’ll need guidance. Tally’s Vision, Raelle’s Care and Abigail’s Fury. She congratulates them on a job well done. “They will call you goddesses.” Alder asks if they got it and the girls laugh. She tells them the Mother said her work is done. “Thank you for changing the world my daughters,” she says and kisses each on the forehead. She leans out of the chopper, looking back at the girls one last time, “when they call you goddesses, make sure you live up to it.”

The Bellwether Unit pauses for a moment then smiles. The speak together in Mothertongue, “Let us begin.”

Thank you so much for joining me for the season 3 recaps of Motherland: Fort Salem. I hope you’ve enjoyed the show as much as I have! Catch the entire series now streaming on Hulu, and let me know on Twitter or Instagram your favorite witch or pairing.