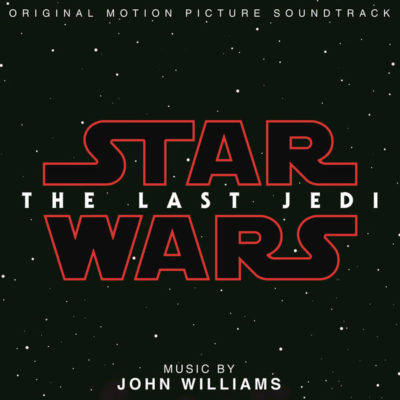 A Star Wars film wouldn’t be the same without the John Williams score and The Last Jedi is no exception. Over the next few weeks, we will be making several trips to the theater to see it, study it, overanalyze it, and try to figure out where this story is heading. But in between and on the way to each subsequent viewing, you can delight in the original motion picture soundtrack to Star Wars: The Last Jedi.

In my opinion, The Last Jedi has the most exciting opening of any Star Wars film and the 7-minute opening track of this soundtrack underscores that feeling. John Williams instantly hooks you with some of the well established themes, but also introduces new ones right from the start in this first track. The stakes are high and you can feel the despair, hopelessness, and sadness of the rebels in this one piece alone.

Because this film reconnects audiences with Luke Skywalker and Princess Leia, you will find themes from the original trilogy written for both characters peppered throughout. Leia’s theme, in particular, sounds hauntingly beautiful on a track called “The Supremacy.” Also returning with prominence is “Rey’s Theme” and the First Order/Kylo Ren themes from The Force Awakens.

Looking for new John Williams music? Look no further, there’s plenty of it. The most memorable and obvious new theme belongs to Rose and is first heard on the track “Fun with Finn and Rose.” It’s an optimistic melody and I love it every time it pops up on the soundtrack.

The most fun new track belongs to “Canto Bight,” the casino music. It’s eclectic and exciting, incorporating instruments that are uncommon in John Williams music, including steel drums and jazz instruments. Not since he wrote for Figrin D’an and the Modal Nodes has Williams felt this unhinged on a Star Wars melody.

The “Finale” track is 8-minutes long and encompasses nearly every theme found in the film. I got misty eyed during the credits when Carrie Fisher’s dedication appeared on screen and it’s easy to pick out that part in this track as well. If you just want one track that provides a broad overview of all of William’s melodies, this is the one.

For the most part, John Williams sticks to his tried and true Star Wars melodies and even brings back a few more original trilogy themes. Compared to the soundtrack for The Force Awakens, there is maybe less original music this time around but I feel this album provides a better aural experience outside of the film. Just in time for the holidays, Walt Disney Records presents the wonderful music from Star Wars: The Last Jedi.