It’s a big year for ESPN as the network will feature 23 games throughout the 2022 NFL season including airing a record-setting 18 regular season Monday Night Football games. ESPN has announced the weekly lineup for MFN as well as other highlights including an ESPN+’s exclusive game, opening Week MegaCast and more. 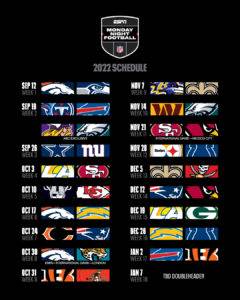