Freeform’s 30 Days of Disney celebration continues today with an all-day extravaganza of films ranging from Oz the Great and Powerful to Tarzan to WALL-E, but the highlight of the day is the Freeform Premiere of Tomorrowland. You are probably aware of the excitement that surrounded the film when it was released in 2015 and how it all came crashing to the ground when it simply wasn’t good. Tomorrowland couldn’t even top $100 million at the domestic box office, placing it lower than The Good Dinosaur, a movie that it feels like nobody saw.

Before I saw it, I remember how excited I was because the concept was so unique and unlike anything Disney had done before. Plus, Brad Bird was coming off his first foray into live-action with the highly-acclaimed Mission Impossible: Ghost Protocol. On the surface, it seemed like a surefire hit that had the potential to not just kick butt at the box office, but also spur on the Tomorrowland renovation that people have been asking about for years at Disneyland. But today I’m not going to bemoan the fact that Tomorrowland failed. Instead, I’ll be doing some Armchair Imagineering and looking about some of the potential changes to Disneyland’s Tomorrowland if the movie had actually succeeded. 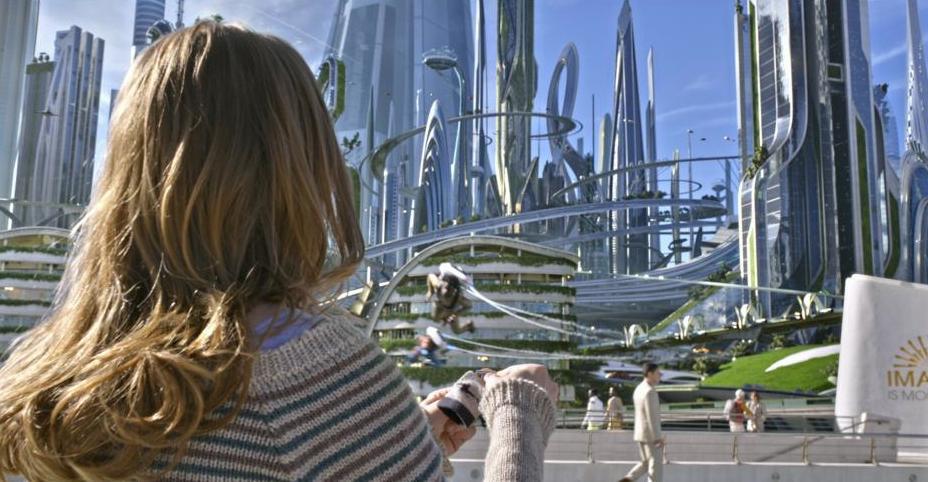 To start off, the biggest change to Tomorrowland would be the aesthetics. There’s no denying that the land needs a pretty big touch up after most of the changes made in the late 1990s have been rolled back today. There is no unifying theme to the land and everything feels cobbled together.

While there is no way to replicate the look of the film for obvious budgetary reasons, just using them as a guideline to create a unified feel to the entire land would have been enough to please countless Disneyland diehards. With this new identity, the land could function as the city center of a suburb of the city of Tomorrowland featured in the film. In this central area, we would see reimagined versions all the restaurants and shops to tie in with the new attractions that would hit the area. 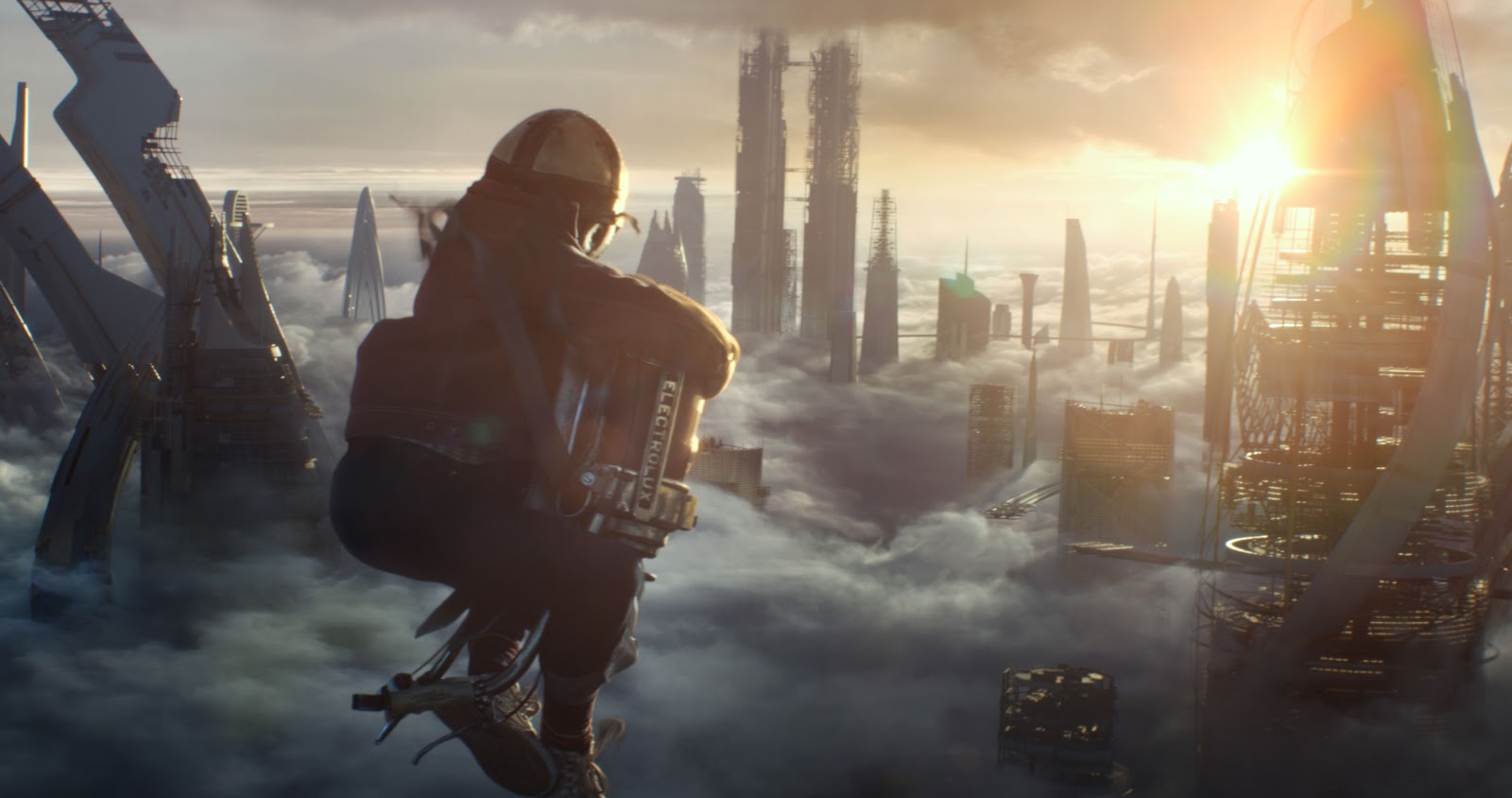 The first thing that guests would notice as they entered would be an open area where the Astro Orbitor stands today. Instead, the Astro Orbitor would be moved above the former PeopleMover loading area, similar to its set up in the Magic Kingdom. As I remember it, a major part of the film involved jet packs, so the attraction would switch its theme a bit to truly embody the film, with the attraction being simply renamed, Jet Packs. 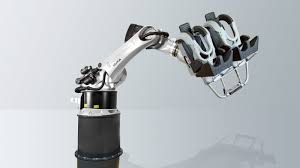 Pairs of guests would be strapped into Kuka arms to create the most thrilling aerial carousel that we’ve seen Disney create. To add to the fun, there would be a joystick on next to each rider that could be used to control vertical and horizontal movement, so if guests wanted to spin around and do flips the whole time, they would have free reign to do so. 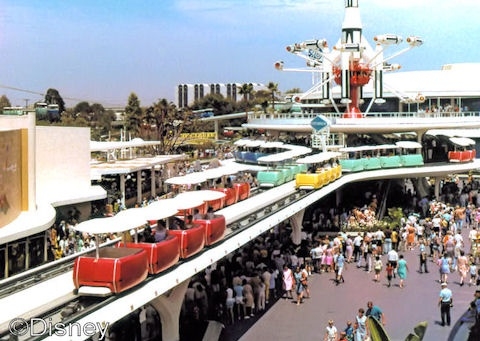 With the amount of money going into this refurbishment, it would finally be time to bring the PeopleMover back to Disneyland. Yes, that would require basically rebuilding the entire track, but in this case, I think that would be worth it. The on-board narration would give helpful information about the city center, serving as a perfect introduction to the entire land. Plus, I just want the PeopleMover back. It feels like forever ago, but all the way back in 2015, Disney announced that we would be getting a Star Wars-themed land. With that in hand, it would have been a perfect time to replace Star Tours with an attraction that fits better in the city center. I’m envisioning the facade being transformed into a hovercraft tour spot. Since guests would be in the suburbs of Tomorrowland, these tours would bring you to the city itself. Disney would have still utilized the same technology as Star Tours, making it a relatively simple refurbishment since they can’t throw $50 million at every attraction. Since this is my dream land, I would get rid of Buzz Lightyear Astro Blasters to include an updated version of one of my favorite attractions, Horizons. Horizons was like a sequel to Carousel of Progress, but set primarily in the future. I think that having a version of this attraction, but set in the future of the city of Tomorrowland would bring a lot of life to the area. Also, since Tomorrowland is a made-up city, it would allow Disney to avoid having to keep up with real-world technology and create whatever they wanted.

We have the present and future of Tomorrowland covered with the PeopleMover and Horizons 2.0, but what about the past? Well, the Tomorrowland Expo Center has been sorely underutilized for years now, so why not create a museum dedicated to the history of the city of Tomorrowland. It would allow Imagineers to flex their creative muscles, and I’m sure that it would be chock full of fun references to Imagineering’s past. With all these different edutainment opportunities about a fictional place, the land could really have a sense of discovery while also not being too grounded in reality.

Those are my big ideas for changes to the land because I wouldn’t change Space Mountain much, except to tie it into the land a little better. However, I would get rid of the Finding Nemo Submarine Voyage and Autopia, using the area to build an addition to Fantasyland (especially since Beauty and the Beast and Frozen should have a permanent home there by now).

Alas, we will never know what their plans for the land might have been since Tomorrowland wasn’t the success that Disney wanted it to be. But hopefully someday soon, we’ll get some of the much-needed changes to Tomorrowland.

Tomorrowland airs at 10:55 PM this evening on Freeform, and the basic cable channel’s 30 Days of Disney programming block runs throughout the month of September.