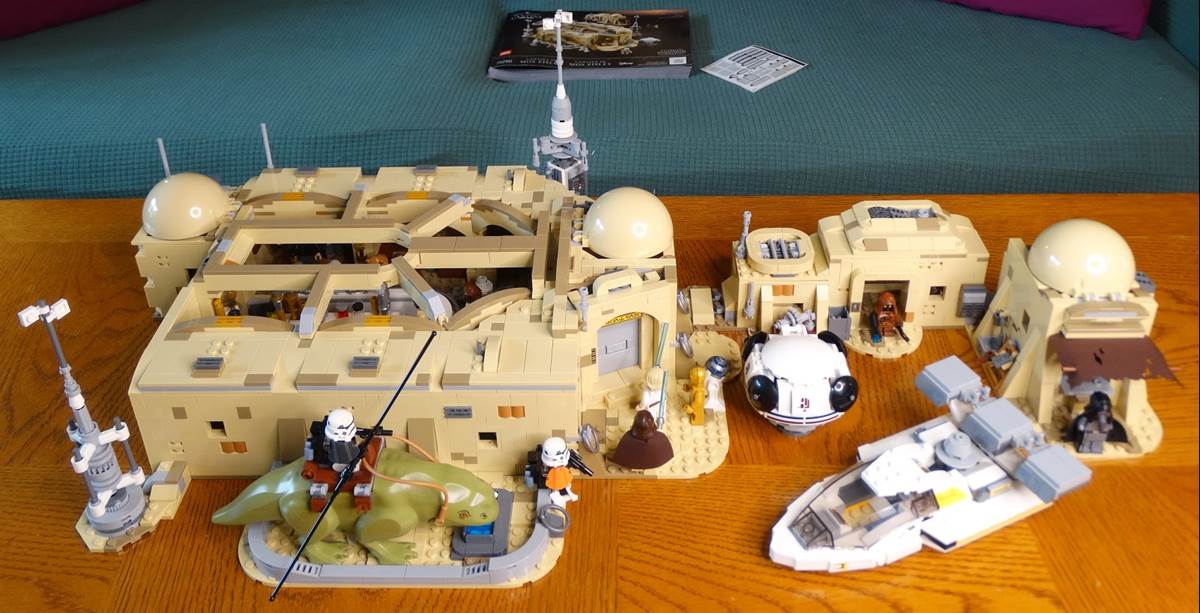 About a year and a half ago I wrote an article for this very website about which famous Star Wars locations were in need of better LEGO sets inspired by them. And of course, number one on my list was the Mos Eisley Cantina, nestled in the heart of what Obi-Wan Kenobi calls the galaxy’s most “wretched hive of scum and villainy.”

This month I got my first wish, as LEGO announced the huge new Star Wars Mos Eisley Cantina building set (#75290), and I couldn’t help but show up to purchase it the morning it went on sale to LEGO VIP members at Downtown Disney District’s LEGO Store. This past weekend I spent about ten hours or so putting the whole thing together. Then yesterday I recorded a fairly thorough video review of the set, going through its many details, minifigures, and side builds.

Speaking of side builds, the Mos Eisley Cantina set contains not just the physical cantina, but also a Landspeeder, an escape pod-type vehicle (which it turns out is also a Landspeeder, according to Wookieepedia), two separate sections of a Jawa junk shop, two nicely designed moisture vaporators, and an area for the also-included Dewback creature to drink water and rest outside the bar. These extra additions go a long way in helping to establish the context and atmosphere of Mos Eisley spaceport, and I could see them all becoming featured parts of an even larger fan-built diorama of the dustry Tatooine settlement.

Inside the cantina itself, we find no fewer than six booths (three on each side), arches, decorative light fixtures, and the central bar, where Wuhrer serves drinks to all manner of alien creatures– just don’t try to bring in your droids. The cantina interior also features an entrance vestibule with a few seats and the requisite droid detector, a storage room with extra supplies, and many more nifty details such as beverage containers lining the bar and booths, a cash register, a cabinet with drawers, wine bottles along the backside wall, and windows reminiscent of what you see in the location from the film. There’s also a tiered stage alcove for Figrin D’an and the Modal Nodes (AKA the Cantina Band) to perform in. Like many LEGO sets of this size, the cantina building swings open on hinges to allow for access to the inside and to open up the space quite a bit. 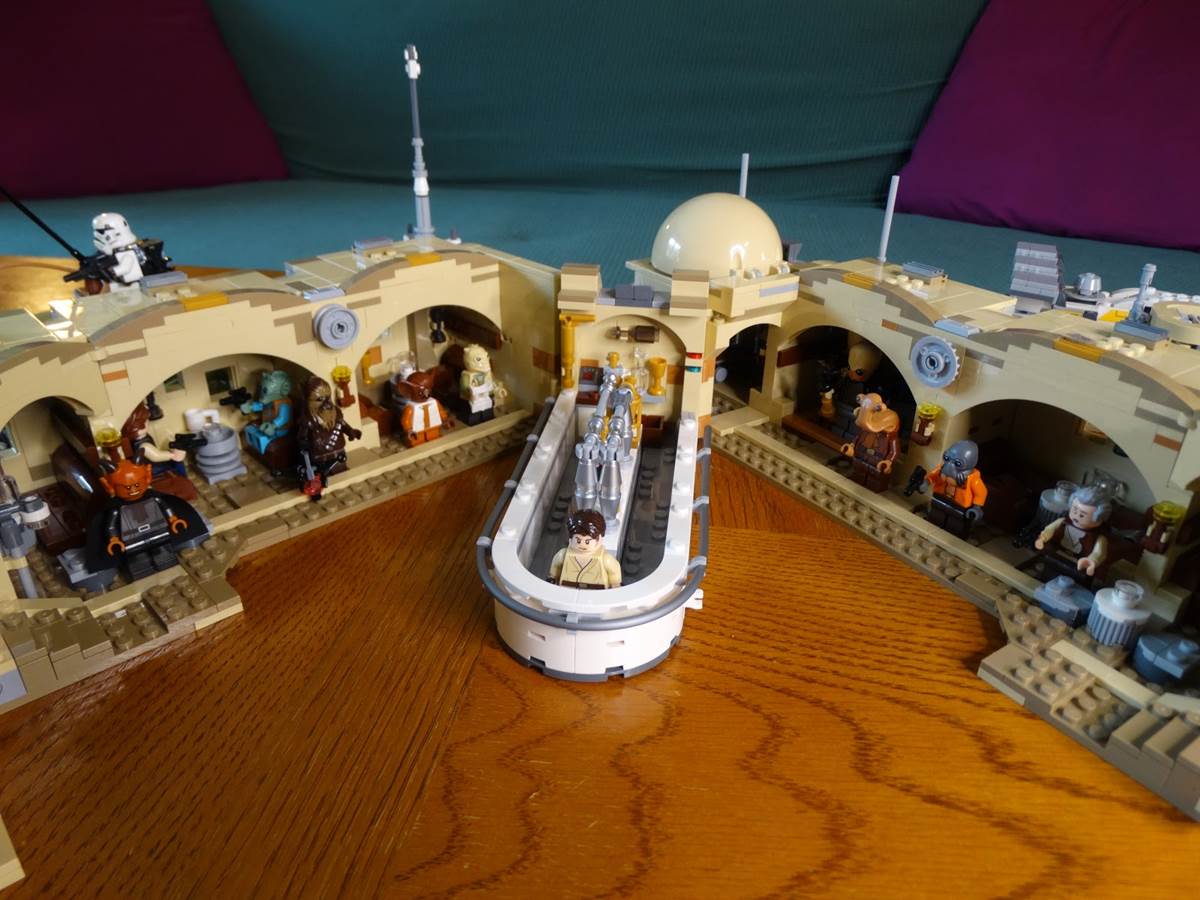 The minifigures included in the set are as follows: Luke Skywalker, Obi-Wan Kenobi, C-3PO, R2-D2, Han Solo, Chewbacca, the Sandtrooper Squad Leader, a lower-rank Sandtrooper, Wuher the bartender, Dr. Evazan, Ponda Baba, Labria the Devaronian, Hrchek Kal Fas the Saurin, Momaw Nadon the Ithorian (AKA Hammerhead), Kabe the Chadra-Fan, Garindan the Kubaz spy, one Jawa, and three Bith Musician members of Figrin D’an and the Modal Nodes. Why they couldn’t throw an extra Bith in to give purchasers the full band, I have no idea. Still, the assortment of minifigures is excellent and it’s great to see a handful of characters that have never existed in this form before.

Overall I am very pleased and impressed with the design work that went into making this LEGO Mos Eisley Cantina a reality. My only minor complaint is the lack of a complete removable roof for the structure. Instead we get a half-hearted light fixture apparatus that only serves to get in the way of views into the bar. Obviously that aspect of this build can be modified by creative fans with some extra pieces at home, but it would have been nice for LEGO to follow through and do that work for us in this case. Beyond that, I believe this set to be absolutely worth its $350 price tag, as it represents something of a dream come true for myself and presumably many other collectors. In the live video below from Saturday, you can watch the first seven hours of my build, though it did take me an additional three or four hours on Sunday to complete the set, so I do recommend taking your time and splitting the experience up over a few days.

LEGO Star Wars Mos Eisley Cantina is available now for LEGO VIP members and will become available on Thursday, October 1 for everyone else at LEGO brand stores and LEGO.com.