We’re back for another recap of Freeform’s Motherland: Fort Salem. After two consecutive attacks on General Alder, the trio along with Scylla head out with a strike team to find Nicte Batan. But it’s even more dangerous then they’re prepared for. 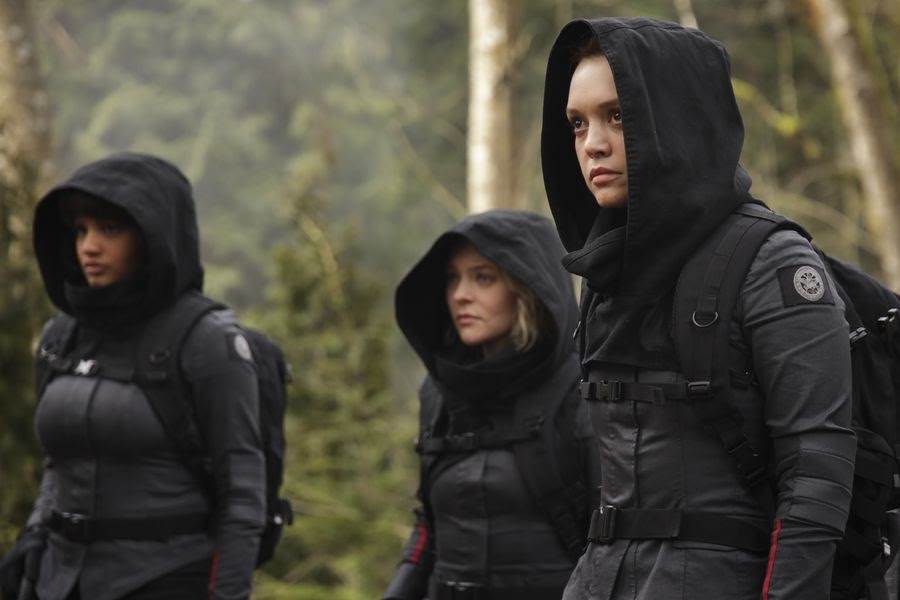 Having survived the long distance attack from Nicte, Alder briefs a group of soldiers on their plans and then addresses Tally alone. Tally sternly requests that her unit join them on the search for Nicte. Alder doesn’t like this idea, but Tally’s determined. She says they'll be helpful in capturing her, but Adler tells her the orders are to eliminate the threat. Tally says she understands and Alder agrees to having Raelle and Abigail join the mission.

Tally heads back to her room to prepare for departure when she’s startled by Petra who’s been waiting for her return. She asks Tally about her hesitation to kill Nicte and Tally says it's wrong. Alder will get to announce the death of the Spree leader and the truth will die with Nicte. Petra says Tally’s not the only one who wants to know the truth and hands her a restraint for Nicte. Tally looks confused and Petra says she’s changing the mission. She’ll notify the strike team, and they are to bring Nicte back alive.

Adil, Abigail, Scylla and Raelle are laying low at Willa’s safe house and Abigail is not happy about Scylla's presence. Raelle tells her it’s okay, the two of them have things to deal with. Raelle looks at pictures of her younger self on the fridge and says she and Willa had a ritual that no matter where they were in the world they’d think about each other at the same time. She was thinking about her mom when Edwin came to tell her Willa had died. Raelle says Willa let them grieve for nothing and that her death destroyed her dad. All for the Spree? Scylla says Willa was devastated and she wanted to reach out but with the Camarilla attacking, Raelle would be safer elsewhere. Raelle just wished her mother had given her that choice.

Raelle tells Scylla the two women she loves most in the world turn out to be terrorists and wonders what that says about her. Scylla asks if it helps knowing they believed they were doing the right thing. She tells Raelle her priorities have shifted and that Willa showed her the way.

Adil is struggling with the knowledge that he’s killed people, even if it’s the Camarilla. Abigail says they saved the girls and Raelle and took out people who’d been hunting them. He agrees but thinks Khalida will see it differently.

Scylla says it’s not about fighting conscription, liberation, or taking innocent lives to prove a point. Aftering seeing what the Camarilla did to Raelle, they’re the only enemy now. The girls then catch up talking about how Raelle connected with mycelium and how Izadora must have been so upset it wasn't her. Raelle says she wished she didn’t have to handle it alone. Scylla says she’s not. She has her unit and they’ll always be sisters. Just then a helicopter can be heard outside and Raelle tells her to make herself scarce, but Scylla says she doesn’t care what happens, she's not walking away from Raelle.

After a stressful and eventful time apart, the trio is finally reunited and Tally’s happy to see everyone. Abigail says they should wake the girls, but Tally says a second transport is coming for them and Adil is to accompany them back. Abigail asks why and Tally says there’s been a slight change of plans. Scylla steps into the hallway and the girls exchange looks. Raelle tells her “a lot’s happened.”

Abigail is shocked that her mother told Tally to ignore a direct order. Raelle says Petra’s becoming a revolutionary. They ask about where Nicte is hiding and Scylla offers help, but Abigail doesn’t want to hear any of it. Raelle tells them Scylla helped save her life and Tally agrees she doesn’t like it, but saving Raelle is all the proof she needs. “She’s changed.” Abigail walks over to Scylla and warns she’ll regret making any false moves.

The unit and Scylla join the strike force and take a chopper to their destination. As they arrive, the leader reminds them that Nicte will be using off cannon work and they’ll need to stay alert. The team sets off into a secluded wooded area. Raelle falls behind when she spots a reclining chair and hears music. Her mom’s voice tells her dinner will be in a few minutes and suddenly, she’s in her own home where Edwin is setting the table and Willa is cooking at the stove. 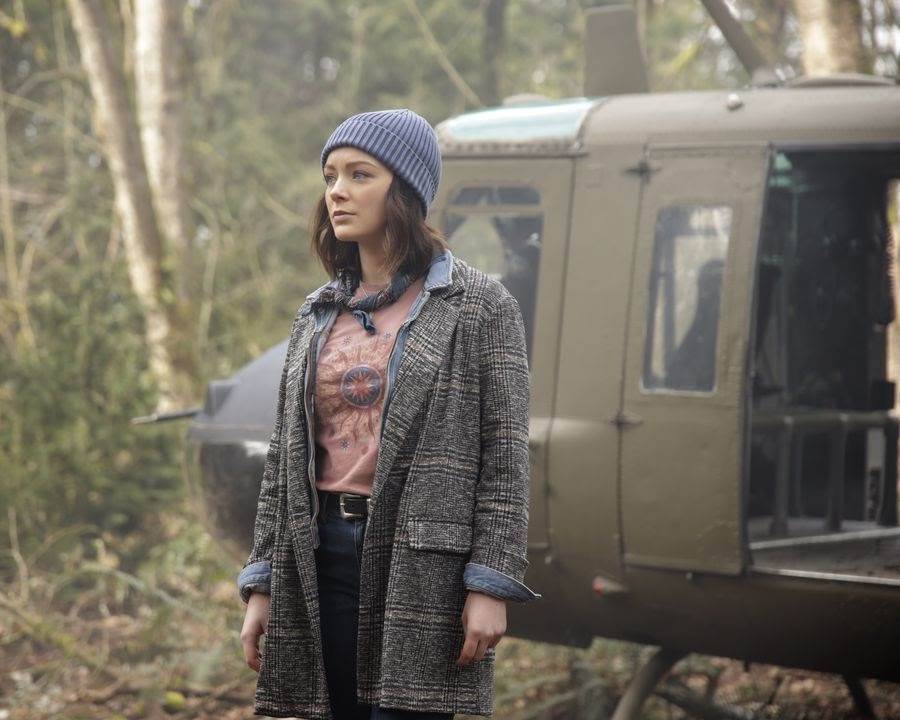 Both can see her and Willa becomes cold, addressing both Raelle and Edwin and saying she can’t believe they thought she’d been thinking about them when she was in war zones. The kitchen phone rings and Willa says not to answer it, but Raelle does. It’s Scylla telling her what she’s seeing is not real. Willa cuts the cord from the wall and Raelle is surprised. Edwin makes a comment about how he’s always thinking about Willa and she blasts him backwards knocking him unconscious or worse. Raelle tries to heal her father and asks her mom why she’s doing this. Scylla’s voice comes over the radio reminding Raelle that this is Nicte’s doing. Willa comes at Raelle with a knife…suddenly she is out of the illusion looking at Scylla. She asks how was able to get out, and then answers her own question. “You’ve used this working before.” “On a larger scale.” Scylla admits.

Tally can’t seem to hear or see anything, but the ground feels different. She kneels down and uncovers a rug. She hears distant music and then Alder is telling her not to worry about that now. She’s in her own illusion in Alder's office. The general is surprised by her behavior, but appreciates that Tally is willing to speak her mind. She comments on how she’s had many Biddies over the years, but there was something special about their connection. Not to mention it was hard to break. Tally is going to rejoin the Biddies. Out of nowhere the Biddies start to hiss at Tally and overcome her. They strap her to a chair for the ritual and Alder tells her what she’s always wanted since coming to Fort Salem is to be Alder. She chokes Tally, but Raelle and Scylla are able to pull her out of the illusion.

Abigail is controlling three tornadoes at once with the Bellwethers watching and encouraging her. Grandmother even says Jem would be proud. Outside of the illusion, Abigail is controlling actual tornadoes and she’s floating several feet off the ground. Tallya and Raelle try to get to her, but she can’t hear them. Inside her vision she’s losing control of the storms and debris starts flying at her family, killing her mother. Horrified by her failure, she lets the storms come at her. The girls try in vain to pull her out. Tally grabs her face and demands she look at her and state her name. This is the push she needs. Abigail is out and the storms vanish.

They go in search of the ground strike team, and find the remaining members dead. They’re all that’s left. As they continue the search for Nicte, Scylla tells them her work is localized and she can’t be far. Dozens of bats fly overhead and the trio starts to argue and insult each other. While they are distracted, Scylla spots a cabin and gets their attention. They move in, but no matter how she tries, Tally can’t see inside. Abigail opens the door anyway. There’s no sign of Nicte, but a woman strung up by her limbs hangs in front of the fireplace. Off to the side sits the body of Jonas, his throat completely burned.

Frustrated and angry, Abigail and Raelle turn on each other while Tally tries to keep the peace. But they’ve had enough of her too. Scylla eggs Abigail on and the girls start physically fighting. Tally leaves them to it. Outside she takes a deep breath and walks into the woods. She looks up at the bats flying overhead and can see red coming from them. “She’s using the bats,” she says aloud to herself, and Nicte replies, “she is,” emerging from behind a tree.

Tally pulls out her scourge to attack but Nicte is too fast and grips the end, pulling it from Tally’s hand. They circle each other and Tally tells Nicte she’s taking her back to Fort Salem. She says to come willingly and Nicte will have a chance to tell the truth, to share her story. Nicte asks how Tally’s going to get her back, considering her unit is tearing itself apart. Tally ponders aloud why Nicte hasn’t killed her then realizes she’s using too much power and she can’t. Nicte will need to release the working on the unit. She does. At the cabin, the girls stop mid fight and wonder what happened. Scylla says it was Nicte again and this time she even got caught up in it. They asked what made it stop when they hear Tally screaming.

Nicte manages to knock Tally down, but the young witch is resilient. She grabs a rock and goes after the Spree leader. Abigail, Raelle and Scylla can’t be certain if it's real or if Nicte is messing with them again, but another scream, not Tally's, sends them off in the right direction. Nicte is passed out and Tally is standing over her. Scylla hands Tally a restraint and the group leads Nicte back to the drop point. 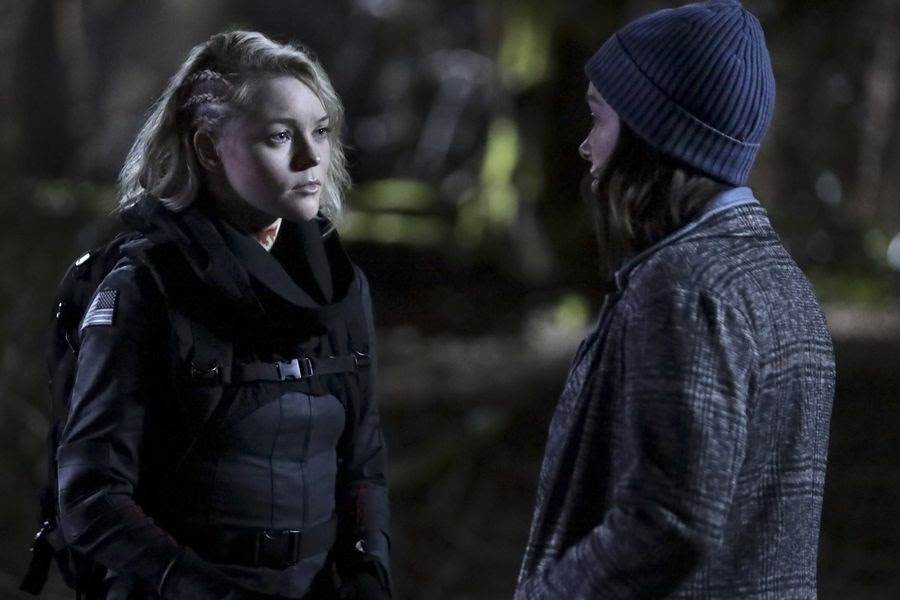 Before they go their separate ways, Scylla and Raelle share a few words. Raelle apologizes for what she said and did back at the cabin, but Scylla is quick to dismiss it. Raelle asks what she’s going to do now and Scy tells her about Tiffany. Raelle suggests she take the girl to the Cession and stay with Edwin. Plus now she’ll know where to find her. Scylla likes this idea. Raelle walks away as the helicopter blades start spinning, but thinks better of it and runs to Scylla, kissing her goodbye.

On the way back to Fort Salem, Abigail and Raelle apologize to each other for their cabin behavior. Tally stares off in the distance more stoic than usual, and Nicte looks desperate and tries to get the girls’ attention. The pilots and unit return to the base where Alder, Petra, Anacostia and the whole company await. Realizing that Nicte is still alive, Alder turns to Petra who reminds her she has an audience. Alder turns to Anacostia who says she knows nothing about this. Alder addresses the group claiming they’ve captured the Spree leader. The company responds by stomping their feet, but Tally doesn’t move, she is singly focused on Alder.

Raelle and Abigail notice that Tally isn’t acting normal. She utters something about how General Alder is going to be the one to pay and reaches for the scourge on her hip. She steps toward Alder, unleashing her weapon. Abigail reaches for hers and thrusts it at Tally, knocking her down. A group of witches hold her down and someone places a lighter under her chin. Tally’s face burns to reveal Nicte. The real Tally is freed of her restraints and the trio embraces. Nicte looks at Alder and tells her she’s looking well.