The fifth book in Vera Strange’s Disney Chills series is the author’s favorite so far and for good reason. Replete with weighty expectations, curious friendships, competitive streaks, magic, demons and even Greek mythology, this book has it all. 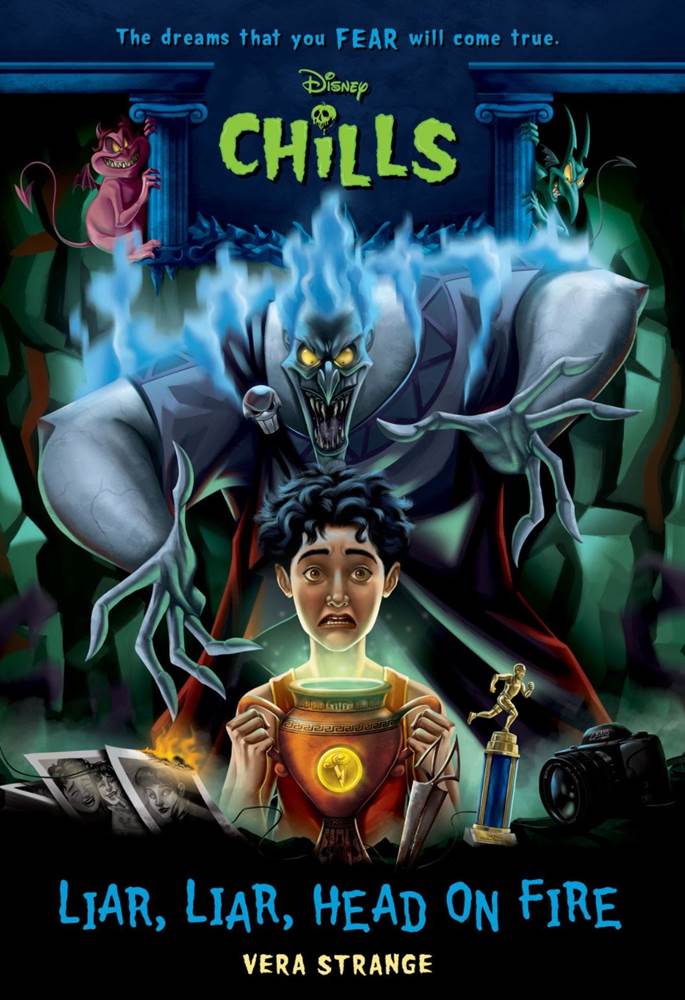 What is the Disney Chills series?

Disney’s answer to R.L. Stine’s Goosebumps – namely, the Disney Chills series – has been successfully spooking us since the first book, Part of Your Nightmare, dropped in early 2020.

Since the debut of book one, Disney and author Jennifer Brody (under the pen name Vera Strange) have rapid-fire released several subsequent novels in the series. We have been keeping our nightlights on thanks to book two (Fiends on the Other Side), book three (Second Star to the Fright), book four (Be Careful What You Wish Fur) and now, book five (Liar, Liar, Head on Fire). We had better keep some backup lightbulbs handy because these Disney Chills books keep on comin’.

What is Book Five: Liar, Liar, Head on Fire about?

Twelve-year-old Hector Gomez appears to have it all. He has a close-knit family and great relationship with his three older brothers (Phil, Luca and Juan), and is in the best physical shape possible. He is strong, fast, and rumored to win this year’s Zeus Cup at the famous Mt. Olympus Spartan Race. The race is the talk of the town and Hector is the last hope for someone in his family to win the Cup after his parents and brothers missed out in the past. He is starting to feel the pressure, especially since running and training are not his passions; he secretly aspires to be a photographer and longs for days filled with candid shots and nature snaps instead.

Extremely talented running newcomer Mae seems to have the edge on Hector, beating him at practice mere days before the race. Hector is desperate to win, make his family proud and move on from the race. Enter: Hades, God of the Underworld, who of course has an intriguing albeit sketchy proposition for Hector. Hades offers Hector god-like strength and speed in exchange for the Zeus Cup after Hector wins the race. This is exactly what Hector needs to achieve his immediate goal. But as Hector soon discovers, one should not make deals with the devil, and things are not always what they seem…

Jennifer Brody has found her stride in drumming up these terrifying tales. In the acknowledgments, Brody shares that she has always been a huge fan of Greek mythology and legends and it shows in Hector’s story. Brimming with references to Disney’s Hercules and beyond, the fun and historical references bounce off nearly every page. Among them, Hector lives in a small town called Mt. Olympus, he is training for the Spartan Run, he must win the Zeus Cup, his couch’s name is Phil (just Phil, not Philoctetes, but close enough), the chapter titles are reminiscent of Hercules’ songs and quotes, and most importantly, he must take a deep dive into his town’s history and Zeus and Hades’ turbulent relationship to quash the evil plan hatched by the God of the Underworld.

The Greek and mythological backdrop provides an entertaining opening into some critical themes, including being different, dealing with expectations, friendship, trust, competitiveness, proving oneself and the pros and cons of “playing dirty.” Brody consistently does a marvelous job in teaming important themes with fun content, as she has done in each of her Disney Chills books to date.

One of my favorite parts of this story that I found different to the prior books is that Hector makes a deal with the devil for something he personally doesn’t really want: he makes a deal to ensure that he wins the Spartan Run. Throughout the book the reader is told the Hector doesn’t really care about the race, he doesn’t want to train, and his passions lie elsewhere, namely photography. But the reason Hector makes a deal with Hades is for his family: to make them proud. His brother and couch, Phil, has spent an exorbitant amount of time and effort training him and each of his family members have tried and failed to win the Cup. This premise struck a chord with me, because unlike prior Chills books in which the protagonist is predominantly consumed with something they want (popularity, for example, like in Be Careful What You Wish Fur), Hector finds himself in a mess for trying too hard to please others. A tricky conundrum indeed and one that readers may find valuable to think on.

Another sufficiently spooky addition to the series

With the appropriate amount of scares, sacrifices and misplaced effort, Brody does it again. Liar, Liar, Head on Fire is a quick, easy read that culminates in just about the most unhappily ever after imaginable. There is also a great twist that I did not see coming. This book is a must for fans of the Disney Chills series and a recommended read for those looking for a fun and fiendish thrill.