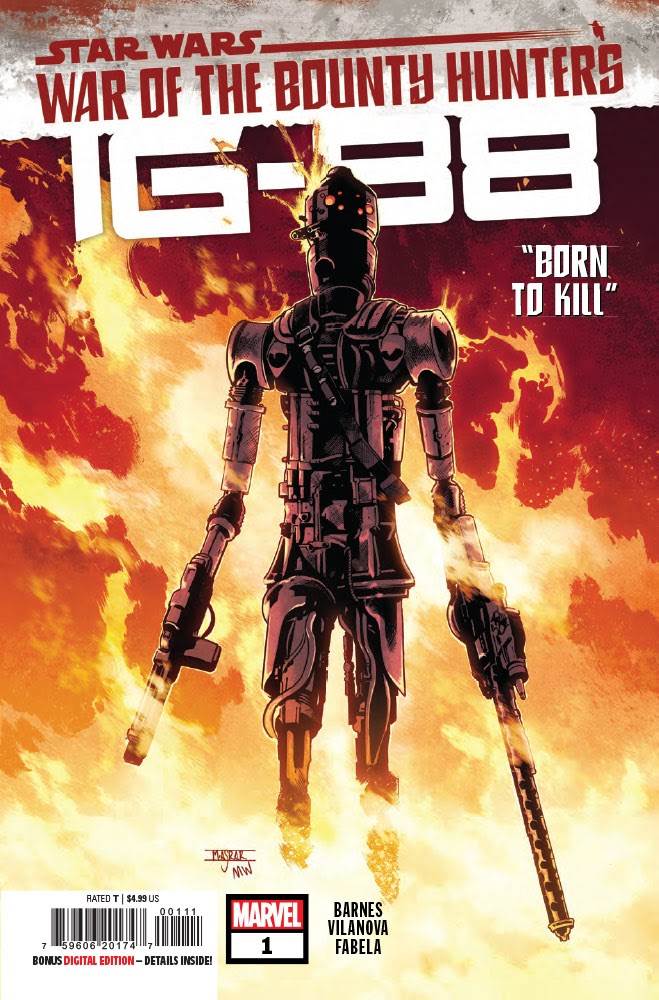 IG-88 is having a moment. The ruthless assassin droid (first introduced in 1980’s The Empire Strikes Back) is a playable character in ILMxLAB’s Star Wars: Tales from the Galaxy’s Edge – Last Call virtual-reality game expansion, and now he’s got his own one-shot comic book from Marvel, tying in to the company’s War of the Bounty Hunters crossover event.

Star Wars: War of the Bounty Hunters – IG-88 takes place within the events of the WOTBH miniseries’ final issue, with the carbonite block containing Han Solo having been recaptured by Boba Fett and on its way aboard the Slave I to Jabba’s Palace on Tatooine. Meanwhile, IG-88 has been defeated and destroyed by Darth Vader (in the pages of the Dark Lord of the Sith’s own ongoing comic), left in scattered pieces on a backwater junk planet. 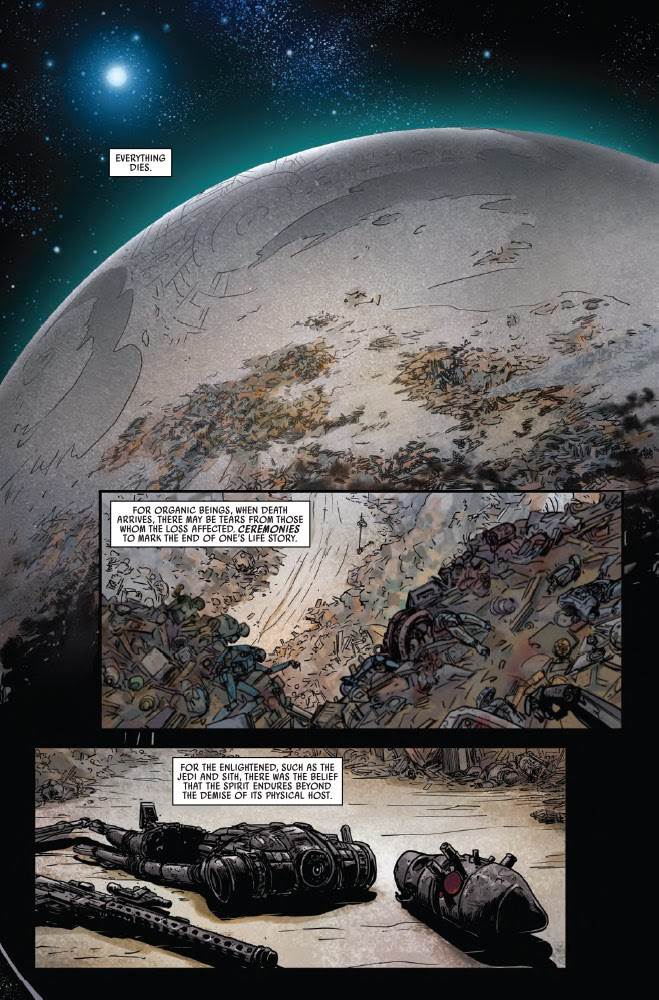 Enter a cyborg droid technician who calls himself RB-919 (I suspect writer Rodney Barnes, best known as the producer of the 2005 sitcom Everybody Hates Chris, named this new character after himself and his own birthday), who has been sent by another bounty hunter, Deva Lompop– who has popped up in all four of these War of the Bounty Hunters one-shots– to recommission IG-88 and set him after Boba Fett. The big reveal here is that Lady Qi’ra wants Han back after having sold the carbonite block at auction. For what purpose? We don’t know, but I suspect we’ll find out more in the upcoming Star Wars: Crimson Reign miniseries. In the meantime, it’s interesting enough to see IG-88 rebuilt and rebooted by RB-919, only to then immediately– and altogether characteristically– turn against his savior. The second half of the comic is spent with IG-88 in pursuit of the Slave I, after contacting Lompop and taking out some pesky pirates who stood in his way. 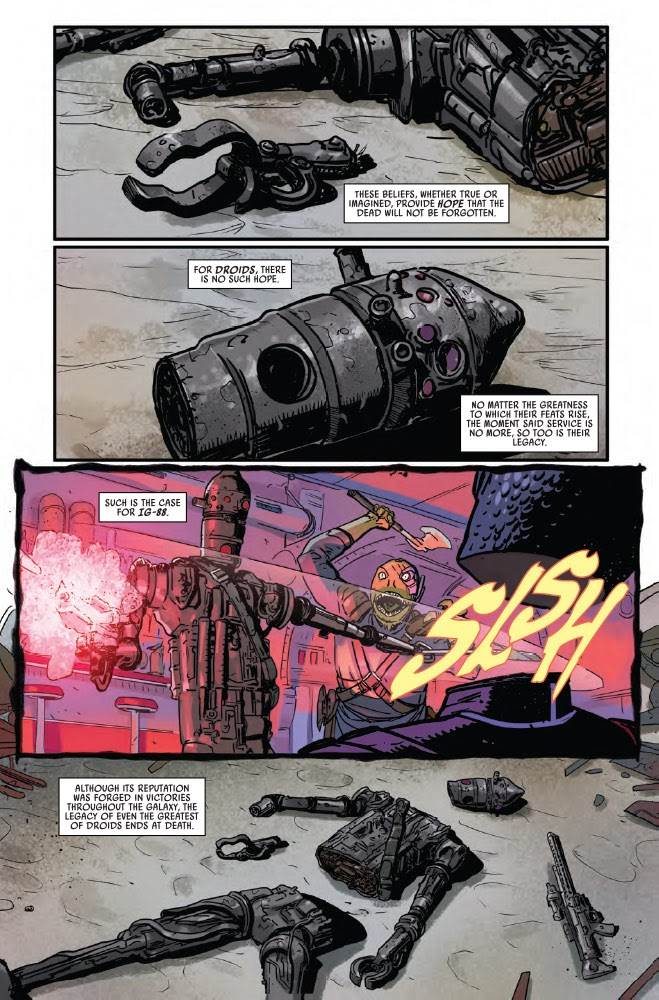 There was a short-story anthology book that came out in the mid-90s entitled Star Wars: Tales of the Bounty Hunters, and the IG-88 story in there was always my favorite, so it was great getting to dive back inside the droid’s head once again. The narration of the comic is divided between RB-919, IG-88, and Boba Fett, with the latter not showing up in true form until the last ten pages– but the titular bounty hunter is an intriguing and compelling enough of a presence to keep things moving at a lively pace until then. Rodney Barnes and artist Guiu Vilanova (Marvel’s S.W.O.R.D.) make for an excellent pairing, with the introspective writing and moody illustrations matching each other’s tones perfectly. I definitely appreciated a lot of the exposition and flashbacks to recent events in the War of the Bounty Hunters chronology, as I have sometimes found it tricky to keep track of all the ins and outs of the crossover’s dozens of tie-in issues. It’s also cool that this comic ends with IG-88 on his own, pondering his place in the universe. That’s the kind of stuff I remember fondly from the above-mentioned short story, and it makes me hope it’s not too long before we get to see more of the infamous assassin droid. 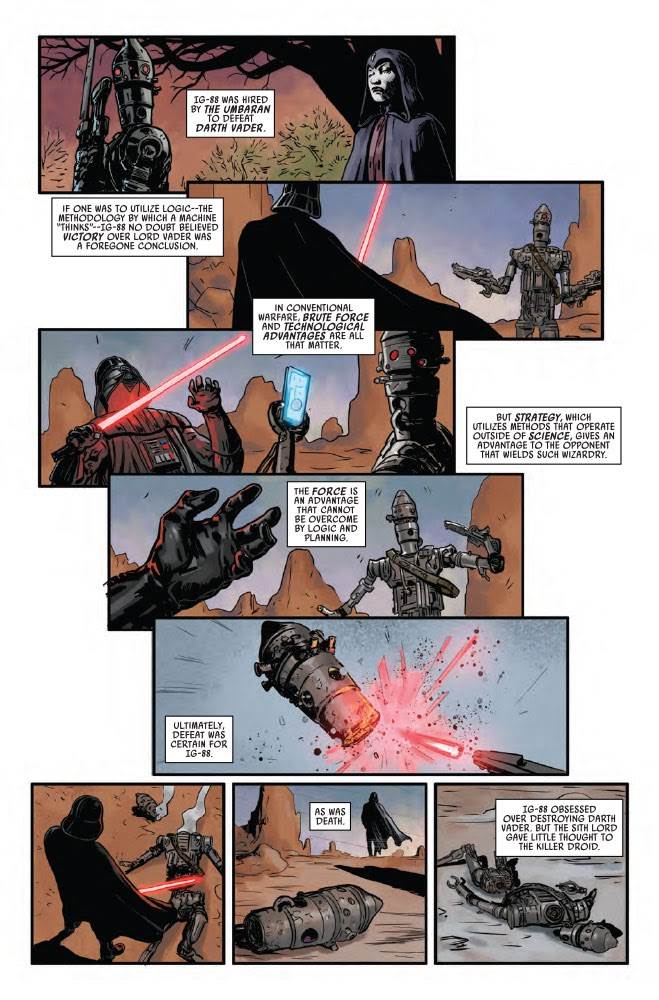 Star Wars: War of the Bounty Hunters: IG-88 is available now wherever comic books are sold.