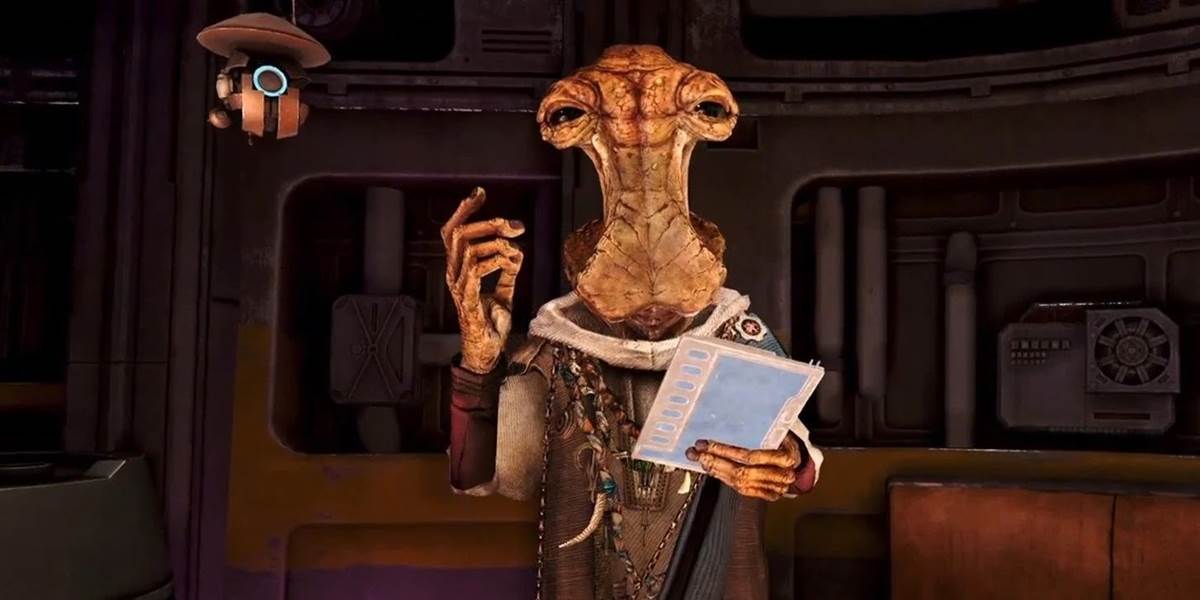 Last year, I played and reviewed the first installment of ILMxLAB’s virtual-reality game Star Wars: Tales from the Galaxy’s Edge on the Oculus Quest. But as I mentioned in that write-up, I wasn’t able to fully complete this impressive immersive experience due to a nagging motion sickness I would get whenever playing for more than an hour straight.

Cut to ten months later and the release of its follow-up, Star Wars: Tales from the Galaxy’s Edge – Last Call. I knew that I wanted to wrap up the first missions before diving in to this expansion, so I steeled my stomach, paced myself, took some time with it, and also enlisted my wife to play through a number of sections (while casting to our living-room television, so I could watch along) whenever I felt I had to take a break. Thankfully, with our combined efforts we were able to get through the remainder of the first game and the entirety of Last Call (which was released in mid-September for an addition cost of $9.99) after that, and found our efforts rewarded with a series of rich, varied adventures in A Galaxy Far, Far Away. 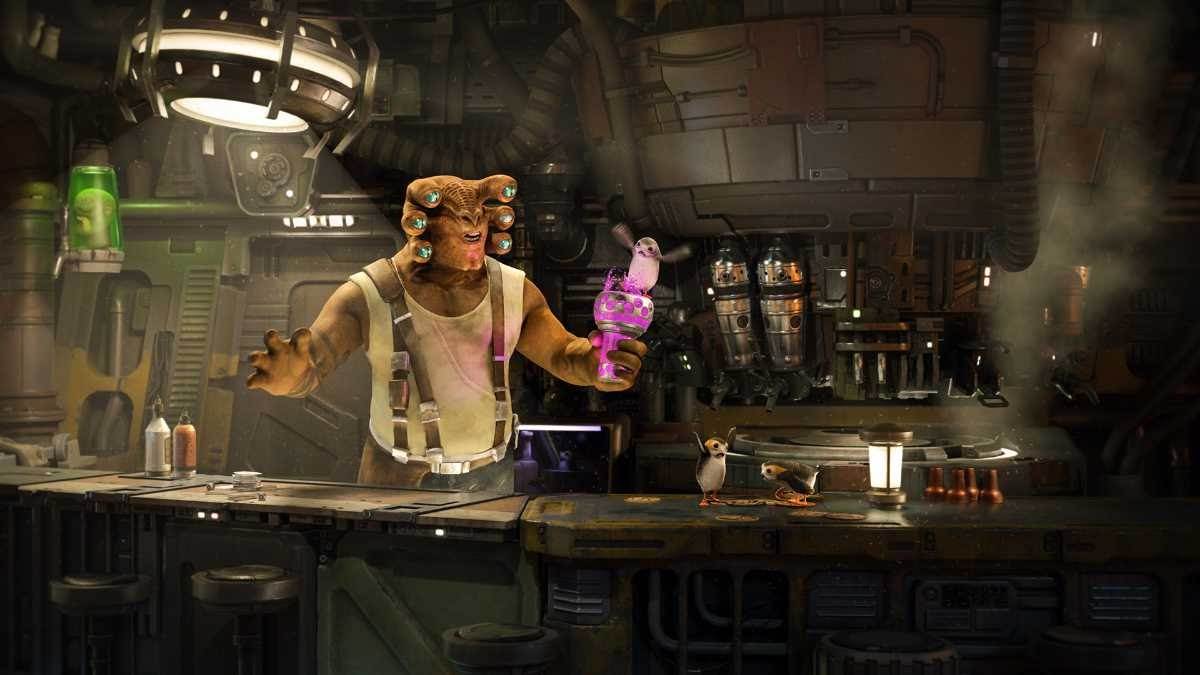 Star Wars: Tales from the Galaxy’s Edge – Last Call begins back at Batuu’s Black Spire Outpost with bartender Seezelslak (voiced again by Star Wars Resistance’s Bobby Moynihan) introducing you to local proprietor Dok-Ondar, the Ithorian who runs the antiquities shop you can actually visit when stepping foot into Star Wars: Galaxy’s Edge at Disney Parks. Dok has a quest for you: retrieve a pair of artifacts from the Batuuan wilderness– two chunks of a tablet that will eventually lead you to an ancient Jedi temple, but not before facing off against numerous enemies who get in your way. There are Guavian pirates and sentry droids working for an aristocrat named Baron Attsmun (first seen in Star Wars: The Last Jedi but voiced here by actor Mark Rolston of Aliens fame) but the real excitement begins in the second major story mission, which sends you to a First Order outpost on Batuu in an effort to rescue a captured Seezelslak. Here you’ll battle dozens upon dozens of Stormtroopers (Who doesn’t love blasting away at those white-armored bucket-heads?) and set explosive events in motion to halt the plans of their leader Lieutenant Gauge (voice actor Daman Mills of Final Fantasy VII Remake). 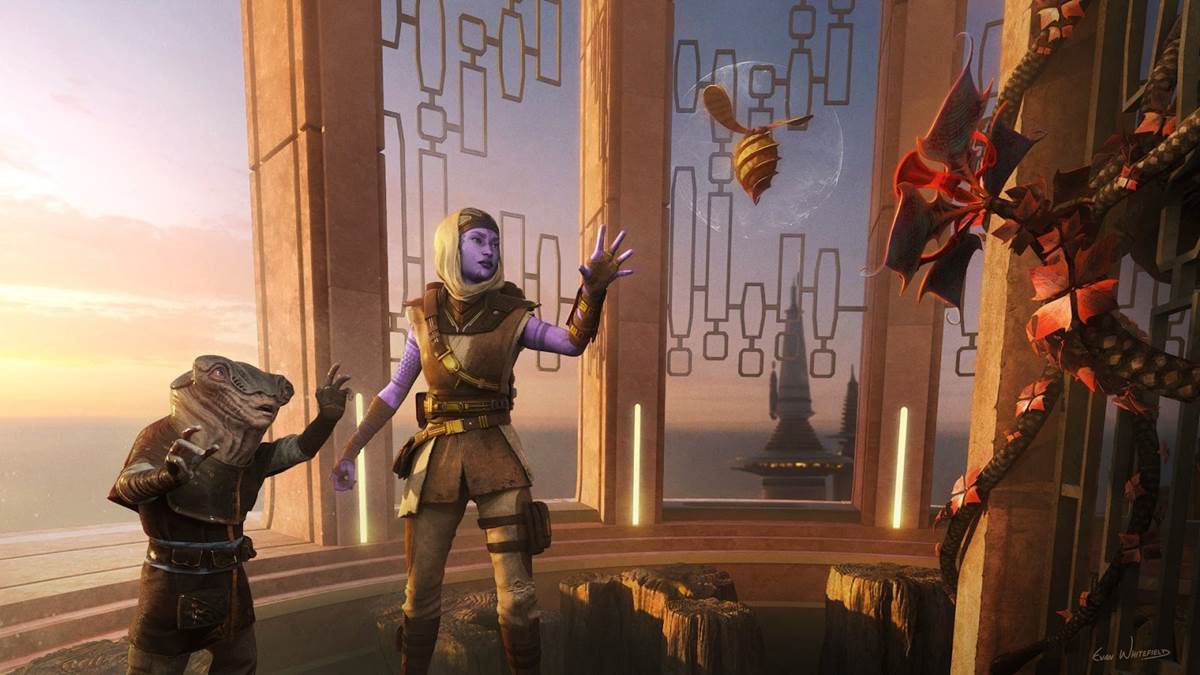 Then, once you’ve finished the main quests, there are two bonus missions to play through– known as “Tales,” because they start with Seezelslak relating one of his famous stories, then transition into flashbacks. In the first Tales from the Galaxy’s Edge, we visited the era of Lucasilm’s current multi-platform initiative The High Republic (set two hundred years before the events of the Skywalker Saga) to play as Jedi Knight Ady Sun’Zee, who explored a Jedi outpost with the help of Master Yoda. In Last Call, Ady’s narrative continues as we help her train her own Padawan learner, proceeding through a series of trails at another Jedi temple perched high atop the spires of Batuu. And lastly, players get to step behind the photoreceptors of feared assassin droid IG-88 (voiced here by Rhys Darby of Flight of the Conchords, doing a spot-on impression of his friend Taika Waititi’s performance as IG-11 in The Mandalorian) as he seeks out a bounty on the Smugglers’ Moon of Nar Shaddaa. 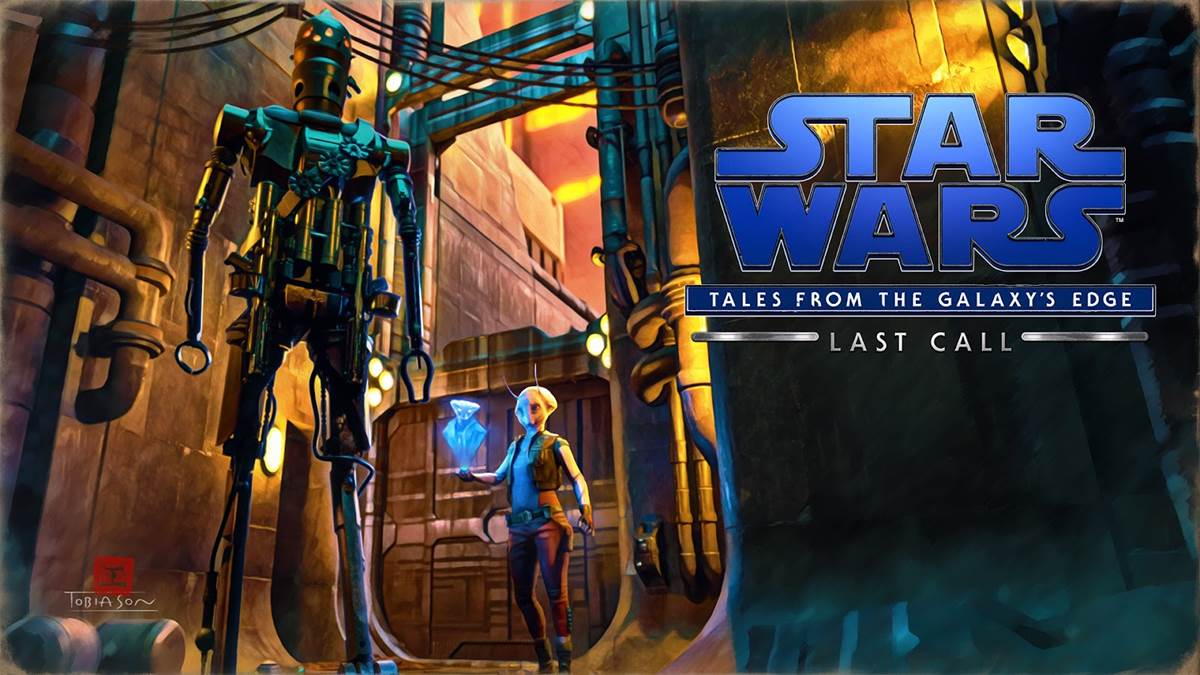 As a longtime fan of the bounty hunters who first popped up on the Executor’s bridge in The Empire Strikes Back, this mission was perhaps the most thrilling portion of Tales from the Galaxy’s Edge for me, but overall I found the experience to be absolutely worthwhile, despite my personal reservations and hesitancy to accept VR as a storytelling medium– not to mention some minor but still frustrating technical issues we encountered along the way. The levels here are incredibly beautifully designed, the characters feel as alive and detailed in their mannerisms and costuming as they would in the movies, and the action is never less than exciting. You’ll use far more blasters and explosive devices than lightsabers in this experience, but as someone who’s always preferred the seedy underworld of Star Wars to the mysticism of the Jedi Order, that was perfectly all right with me. Star Wars: Tales from the Galaxy’s Edge works both as a supplement to the Star Wars: Galaxy’s Edge lands you can visit at Disneyland and Walt Disney World, and as an entertaining standalone virtual-reality title suitable for fans of this franchise or for those who simply like roaming around a gorgeously rendered VR landscape and blasting things. Just be sure to take breaks if you need them, or be like me and enlist the much-appreciated help of a loved one.