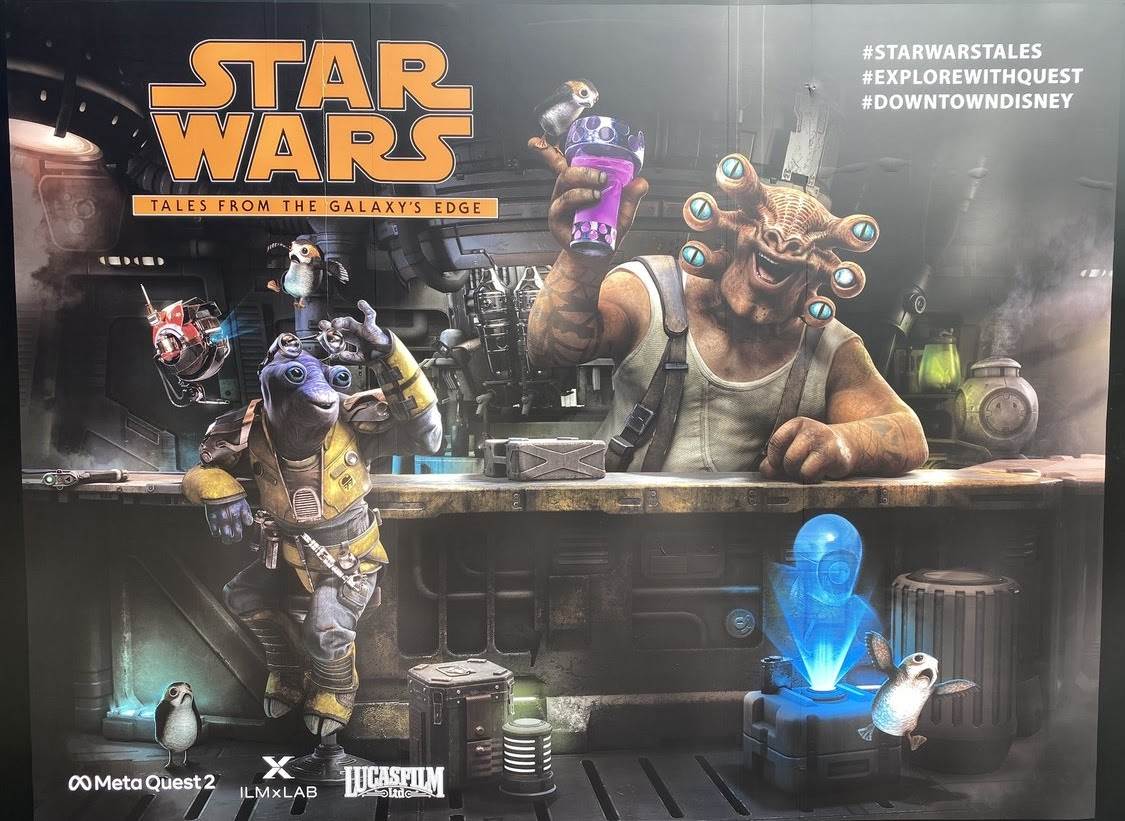 With ILMxLAB’s Star Wars: Tales from the Galaxy’s Edge virtual-reality preview experience opening tomorrow in the former ESPN Zone building at Disneyland Resort’s Downtown Disney District, I was invited to pay an early visit to the activation, try out the demo of the game (which I have already played through and reviewed here at LaughingPlace.com on my home VR console), and chat with its producer Alssa Finley.

Guests can either reserve a timeslot in advance or wait in a standby queue to access the ten-minute complimentary experience, where they will strap on a Meta Quest 2 headset and visit Seezelslak’s cantina in Black Spire Outpost, where they will have the option to either hang out and chat with the local denizens or briefly venture out into the wilds of Batuu and go up against some members of the Guavian Death Gang. On their way out, participants will receive some cool swag and even a $25 gift card good toward quest software downloads.

In the interview below, Finley and I discuss this new experience at Downtown Disney, the process of making Tales from the Galaxy’s Edge as interconnected with the Disney Parks lands and the rest of the Star Wars storytelling universe as we’ve come to expect, and how the ILMxLAB team is using this opportunity to encourage fans to try out VR for what may be their first time. Mike Celestino, Laughing Place:  Why did ILMxLAB choose to bring this experience to Disneyland Resort?

Alyssa Finley:  The thing that I’m really excited about is having people who don’t have a chance to experience VR otherwise have a way to just come to a place, sign up for a slot, and be able to try it out in a super safe environment, and get a sense of the magic of the experience. Because for me, the first time I put on one of these headsets– it was for Vader Immortal– and got in there, and Darth Vader walks up to me, and I’m like, ‘Okay, I’m small and weak and terrified.’ That feeling is unimaginable, and allowing more people to come in and experience it firsthand, and see if they like it, and see if they want to explore more, is an incredible opportunity. I’m so grateful that we get to do this.

LP:  What has been the biggest challenge in getting the word out about this game, or getting people to try out VR in general?

Finley:  I personally have had so many people come over to my house, if they’ve got kids who are Star Wars fans or full-grown adults who are fans, to be able to say, ‘Hey, try this out.’ It’s just this magical experience that they didn’t know existed. We live in this world where we know VR is a thing and headsets exist, [but] a lot of people just don’t have the experience with that. So giving them a chance to step into that world for the first time and feel that magic… it’s really just about, ‘What do you want to do from there once you know that it exists?’ LP:  How do you usually pitch Tales from the Galaxy’s Edge to someone who may not be familiar with the game?

Finley:  It’s an invitation to go on a Star Wars adventure. The package we’re trying to offer is both the adventure of being a droid repair tech who is just a regular person caught up in a bad situation and then having to make the best of it. But also, through the lens of the cantina, being able to be transported to these completely different worlds… into The High Republic era, into a lost Jedi temple where you are a Padawan and you have Force powers, you’ve got a lightsaber, but you’ve also got a giant problem in the shape of a Sith relic that needs to be contained. And it takes Master Yoda coming in to help you resolve that issue. So really it’s just the promise of being able to adventure in the universe and fully live the Star Wars experience.

LP:  This experience is right next door to Disneyland, home to Star Wars: Galaxy’s Edge. How does this VR experience complement what guests can see and do in the theme park?

Finley:  That’s exactly it– it’s not the same thing you see in the theme park. When you’re in the cantina [in the game], you have a chance to go over to the window and look out and see the vista with the Millennium Falcon there. That’s the same view you would see if you went to that spot in the park, and the reverse view also exists when you go out into Three Suns Overlook and you look [down]… there’s Black Spire Outpost right there in the distance. We wanted to create that connectivity between the two spaces, so that your brain understands how they connect. But from our point of view, Tales from the Galaxy’s Edge is about exploring the wild. It’s about going to Batuu and seeing a side that you would not see inside the park. And when you do go to the park, you can think about the things you saw [in the game] and how they match up, and how the soundscape is so similar. It is all this interconnected world, and you’re just exploring another side of it. 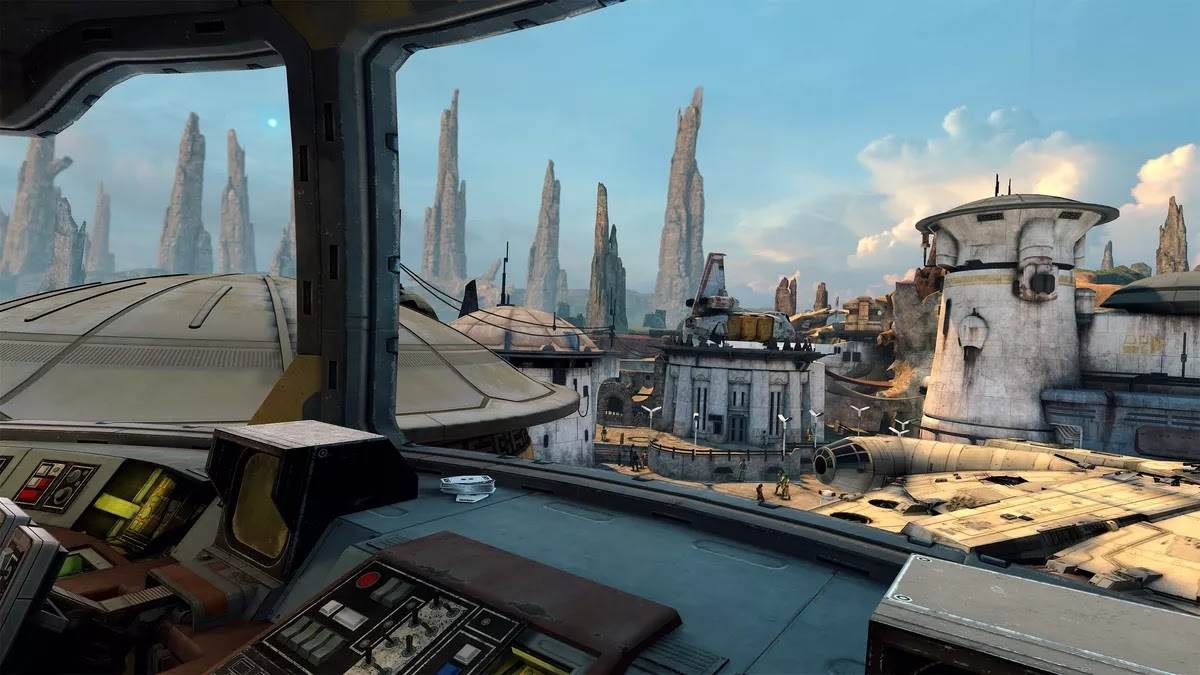 LP:  Speaking of interconnectivity, my favorite thing about current Star Wars is how each story connects with others across a variety of mediums. How did your team ensure that Tales from the Galaxy’s Edge did the same?

Finley:  We work with these incredibly brilliant people called the Lucasfilm Story Group, and they keep us on the straight and narrow in terms of making sure we have the details right. They’re these incredibly collaborative folks who just want to tell more Star Wars stories, which is so lucky. But at the end of the day, when we say to them, ‘Man, wouldn’t it be amazing if there was a lost Jedi temple on Batuu?’ they’re like, ‘Great, let’s figure out the right era. Let’s figure out what timeframe it was where Master Yoda could have had this as his number-one priority to deal with.’ And they help us find the right space, the right details, the right framework to make the whole story make sense. Now, I don’t know how they keep all those details in their brains, but they do.

LP:  As far as the gameplay goes, how do you balance having a challenging and rewarding experience for those with a lot of VR experience with making Tales from the Galaxy’s Edge accessible to those who are stepping into that world for the first time?

Finley:  That is so the right question. [One] of the things that we did [is] having difficulty settings. We have four different difficulty settings, ranging from story-level difficulty, which should be very very hard– not impossible– but very hard to get yourself into too much trouble. And we have hard difficulty, which is basically, ‘I am a gamer. I am going into this with a hardcore point-of-view.’ It’s a big challenge. We tried to create variants that really support the play style that people want to bring. At the beginning of the demo, you face a choice of ‘teleport’ or ‘free-move.’ Some folks really like to strafe around and go back and forth and use the hover-pack to go up in the air. They have a very strong stomach, which… more power to them.

That is the way they like to play; it gives them better strategy against the enemies, and they love it, so we leaned into making sure that those options were as robust as possible. But we also wanted to make sure teleport was there for people who maybe too much motion is a little too much. Across the board, one of the big learning experiences for us making this game, is just to try to give people as many comfort options as possible so they can find their way to play. It is my hope that we have found a lot of those by this point, so as many people as possible can jump in, find the settings that work for them, and get in there and have that experience. LP:  Can you elaborate on the process of bringing The High Republic era of Star Wars storytelling into Tales from the Galaxy’s Edge?

Finley:  That was one of the things we got to work with Story Group on. We created an all-new character for the player to inhabit, and that is the Padawan Ady Sun'Zee. She goes into that Jedi temple with her master, something terrible happens, and everybody’s wiped out but Ady. Then Ady has to pick up this quest with the help of Master Yoda and contain the relic. So it was really just working with Story Group to find the right timeframe for that story and then go ahead and flesh it out and tell it.

LP:  Lastly, I want to ask about the characters in this experience. Not only do we meet people that we already knew like Hondo Ohnaka and Dok-Ondar, but we also get new characters like Seezelslak.

Finley:  We definitely wanted to populate [the game] with folks that you would know if you had come to the theme park. You can actually see [Droid Depot owner] Mubo in person here, rather than have him just exist as a [background character]. It’s his workshop, but you don’t see him [in the park]. In the experience, you can go into his back room, you can see how he works, you can talk to him some more, you can sell back all the sporks that you’ve collected for mega-cash in his salvage machine. We wanted to have those familiar characters, as well as stormtroopers, but it’s not an adventure if you know what to expect from everybody you meet. That’s why new characters like Seezelslak and Tara Rashin, the head of the Guavian Death Gang, and Lens Kamo [are so important]. We added a bunch of new characters for you to interact with and get to know, that will also be part of the bigger story. We wanted the player to feel like they were learning and growing as they went, as well.