At the beginning of the summer, writer Charles Soule’s enjoyable War of the Bounty Hunters comic-book miniseries shockingly reintroduced the character of Qi’ra (first seen in 2018’s Solo: A Star Wars Story film) back into the Star Wars chronology between the events of The Empire Strikes Back and Return of the Jedi.

Now, Soule is following up that storyline with a second Qi’ra-focused miniseries entitled Star Wars: Crimson Reign, which sees Han Solo’s former girlfriend steering the criminal enterprise known as Crimson Dawn into a path of destruction. 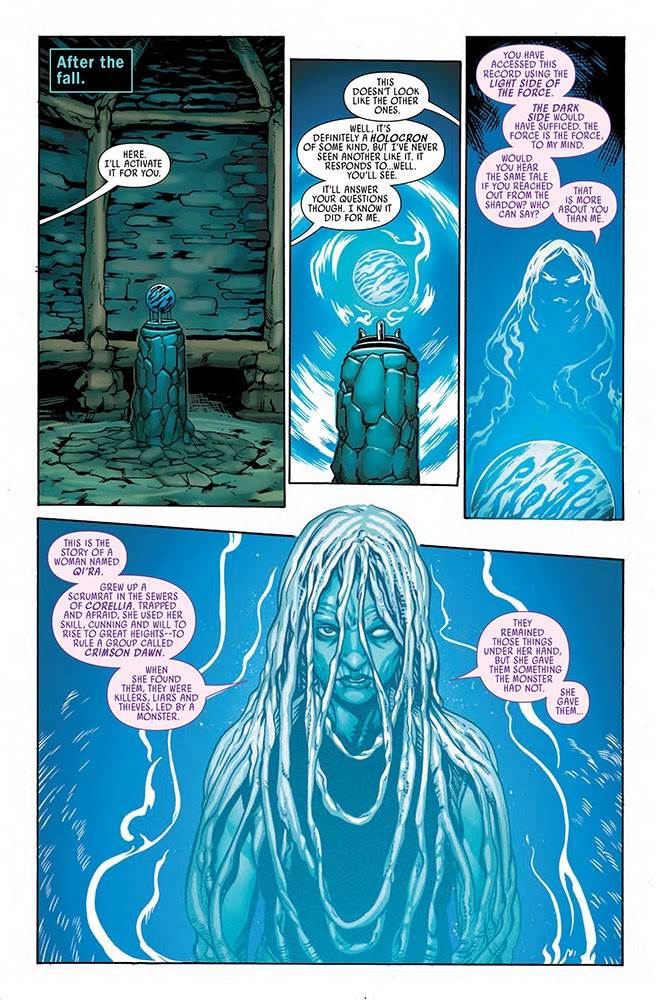 Crimson Reign #1 begins with a flash-forward to sometime “after the fall”– the fall of what isn’t revealed until the end of this issue, so I won’t spoil that here– where a holocron recording of a haggard woman who calls herself “the Archivist” tells the history of how Qi’ra began to use Crimson Dawn’s influence to further her quest to destroy the Sith once and for all. In pursuit of this goal, Qi’ra has assembled a deadly collection of individuals and groups who have felt themselves wronged by the Sith Order in the past: the Knights of Ren, Chanath Cha and the Orphans, Deathstick, and Ochi of Bestoon, among others. These gangs and assassins are ordered to bring chaos to the galaxy’s underworld, setting other criminal syndicates like the Black Sun and Pykes against each other by planting seeds of doubt and suspicion among their ranks. It’s exciting to note that this story gives us the first narrative mention of Black Sun’s leader Prince Xizor in the current canon (see the Legends-continuity novel Star Wars: Shadows of the Empire for more information on him), but there’s also a lot more going on in that we are introduced to a number of new characters and factions, all of whom are either working for Crimson Dawn or eventually fall victim to Qi’ra’s machinations. 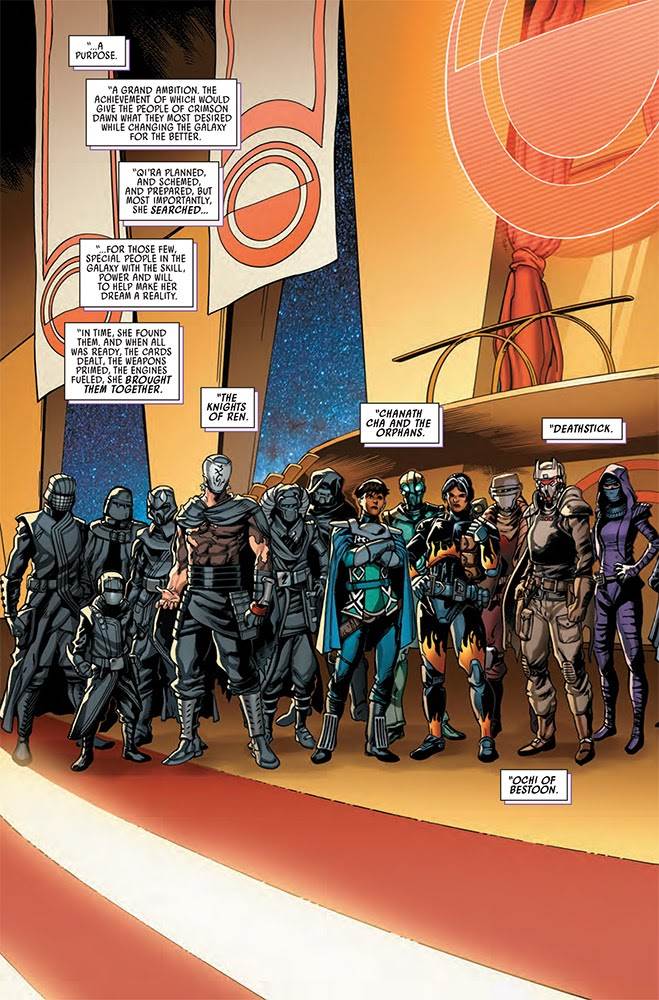 We do find out a little bit more about Qi’ra’s time working under Maul when he was leader of the Dawn, and she also gives a brief explanation for her vendetta against Emperor Palpatine and Darth Vader, though I’m not 100% sure I’m buying it just yet. I feel like there must be more going on underneath the surface, but we’ll surely find out more as the miniseries goes on. In the meantime, it’s pretty fun so far to see the Orphans, the Knights of Ren, and the assassins take on their assigned tasks one by one, with each subsequent reveal becoming more and more tantalizing. Some of the targets these characters will seek out in upcoming issues will undoubtedly be tricky propositions, and how cool is it that Soule is using this opportunity to tie together and explore some of the more intriguing aspects of this period in the timeline? It’s tough for me to write any more about that aspect without revealing too much, so I’ll just say that Star Wars: Crimson Reign is off to an interesting start. Artist Steven Cummings’s (Marvel’s Elektra) illustrations complement the plotting and dialogue extremely well, and the first issue alone opens up so many compelling possibilities for what we might see as this adventure continues to unfold. Let’s just keep our fingers crossed that the ever-expanding tapestry that is Star Wars storytelling universe has plans for Qi’ra outside of the comics, too.