Like any fan convention, C2E2 was full of guests cosplaying as their characters from hundreds of franchises and this year the Disney fans did not disappoint. We were delighted to see costumes from Disney Channel, Star Wars, Marvel, the Muppets, Disney movies and even the Fox cult favorite Firefly. Let’s take a look: One of my favorite looks from C2E2 guests was this life size version of Muppets Doctor Bunsen Honeydew and his faithful assistant Beaker! The thought, planning and execution of this look is just so impressive. Fans of Disney Princesses will appreciate the detail put into this gorgeous yellow ball gown for Belle (Beauty and the Beast) as well as Kida and Milo Thatch’s (Atlantis) costumes displayed by this couple. 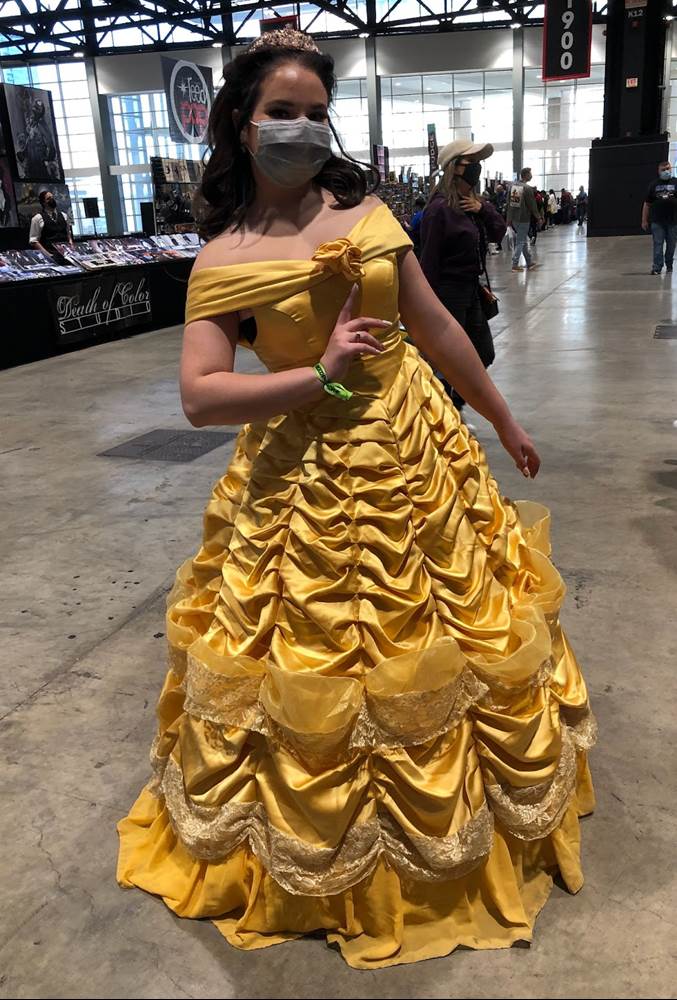 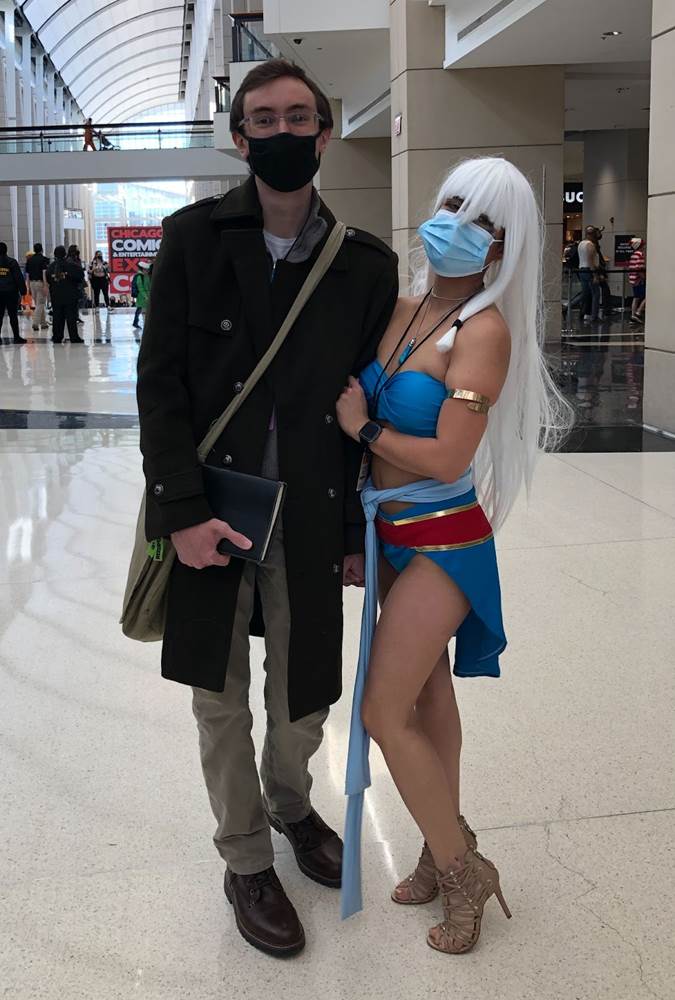 Queen Elsa (Frozen) became pals with demigod Maui (Moana) and both decided to see what it was like to live the Mandalorian life. Elsa even has her own Asset: Olaf dressed as Grogu! We spotted many Loki variants including President Loki (“what did you expect?”) who happened to be hanging out with Bro Thor (Endgame). And Thor made sure to complete his look with Stormbreaker. Sticking with the Asgardians for a moment, we also saw Sylvie walking the show floor with Alligator Loki (Loki)! And outside the exhibitor hall, we found this Loki-BB-8 mash up proving that the small droid had found his “Glorious Purpose.” 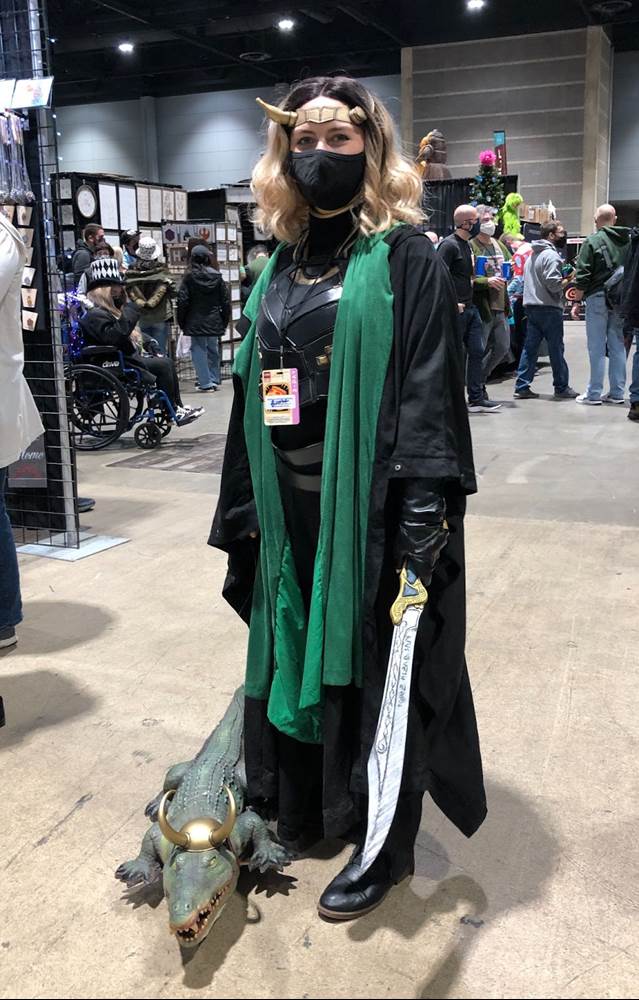 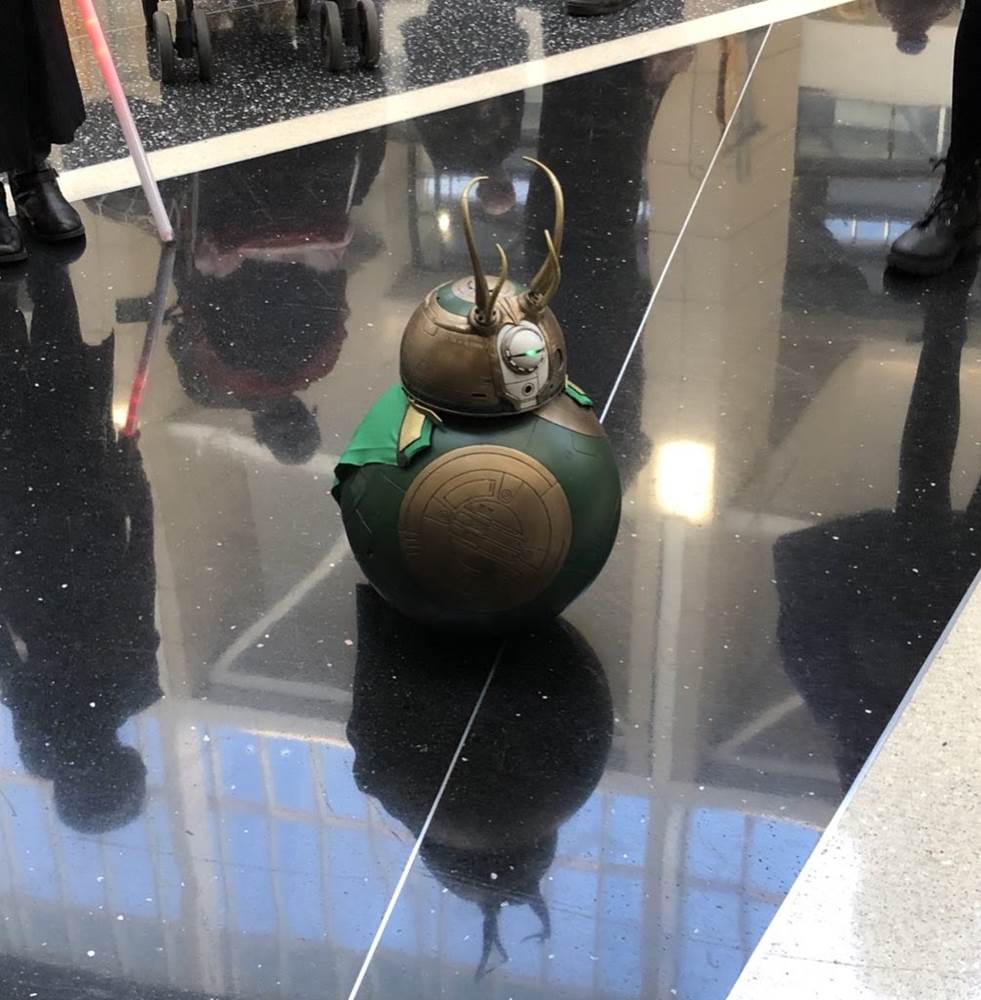 Ahsoka Tano looked amazing and you’ll also notice a Boba Fett hanging out in the background. With many comic fans in attendance, it was natural to see the X-Men so well represented and the Samurai versions of Colossus and Deadpool were incredible. With Christmas right around the corner, Thanos (Infinity War) showed up as Santa Claus and was threatening to snap the naughty children (kidding, kidding!). One of the more elaborate costumes was this cosplay of Ursula the Sea Witch, complete with eight octopus tentacles. This guest was well prepared and simply gilded around the showfloor, happily stopping for pictures anytime someone asked. Baron Zemo was here too wearing his stylish white collared coat and his iconic purple mask. While we’re on the theme of antagonists one guest put on his best Grandmaster gear (Thor: Ragnarok) while another went all out on a very impressive Doc Ock (Spider-Man: No Way Home) costume. 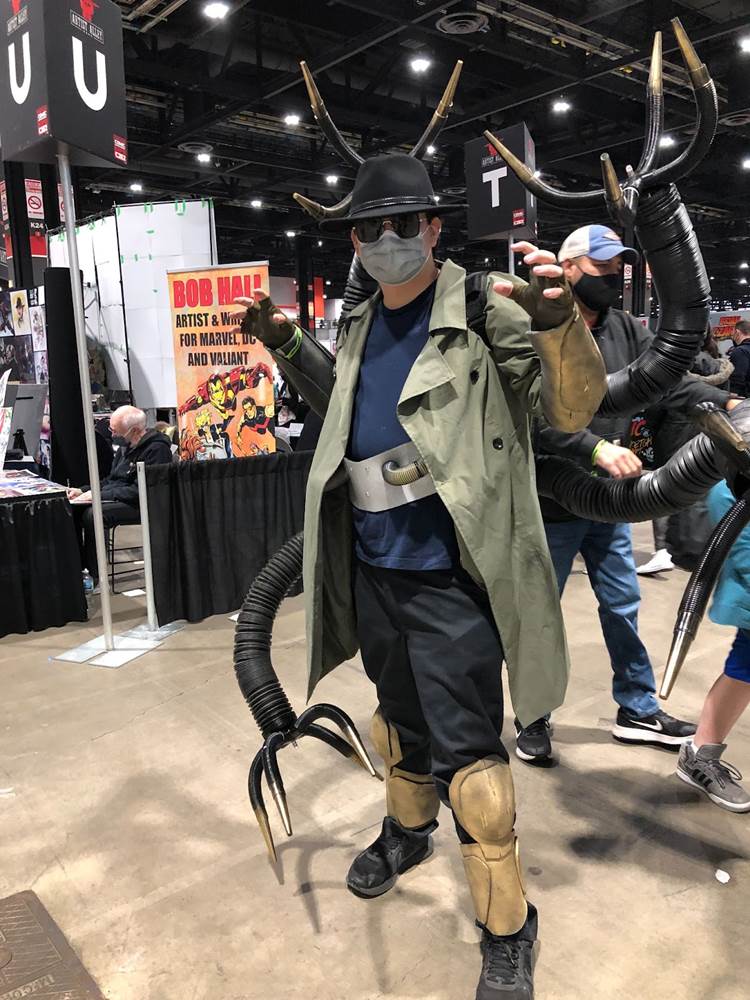 Any Browncoats out there? Jayne Cobb (Firefly) was keeping us safe from those gorram Reavers and maybe making a couple of questionable deals while he was at it. But one thing is for sure: “A man walks down the street in that hat, people know he's not afraid of anything.” 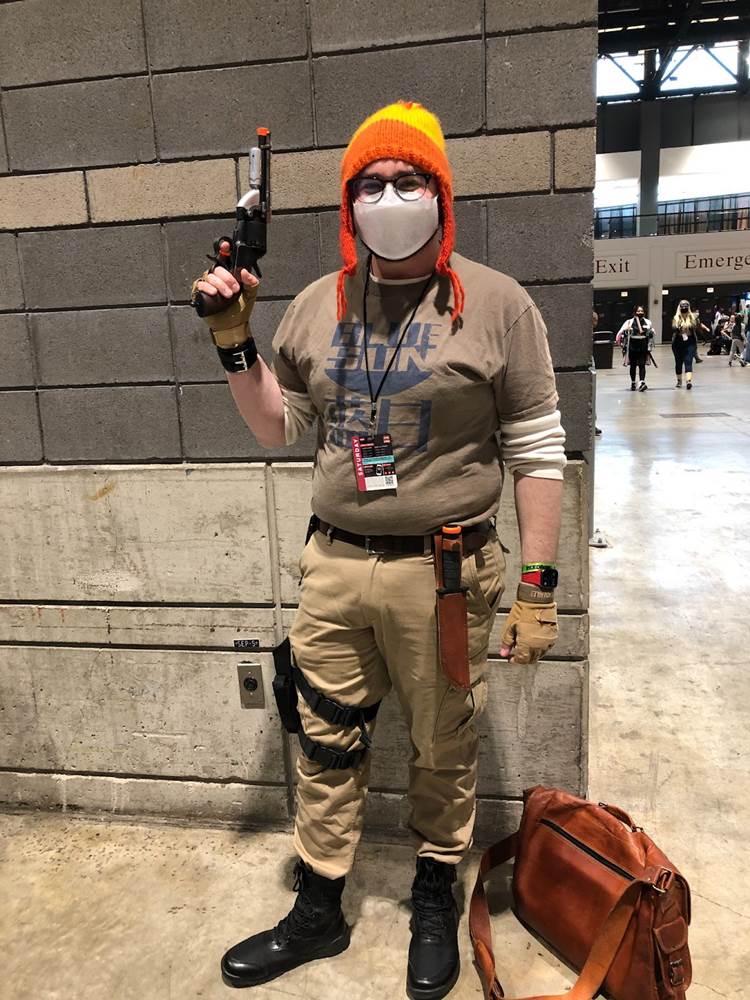 Another protector serving the people on the show floor was Cliff Secord aka the Rocketeer who was showing off a highly detailed replica from The Rocketeer.

Handyman Fix-It Felix (Wreck-It Ralph) was walking around looking to help anyone who needed repair for their booth or costume. That magical golden hammer is no joke. 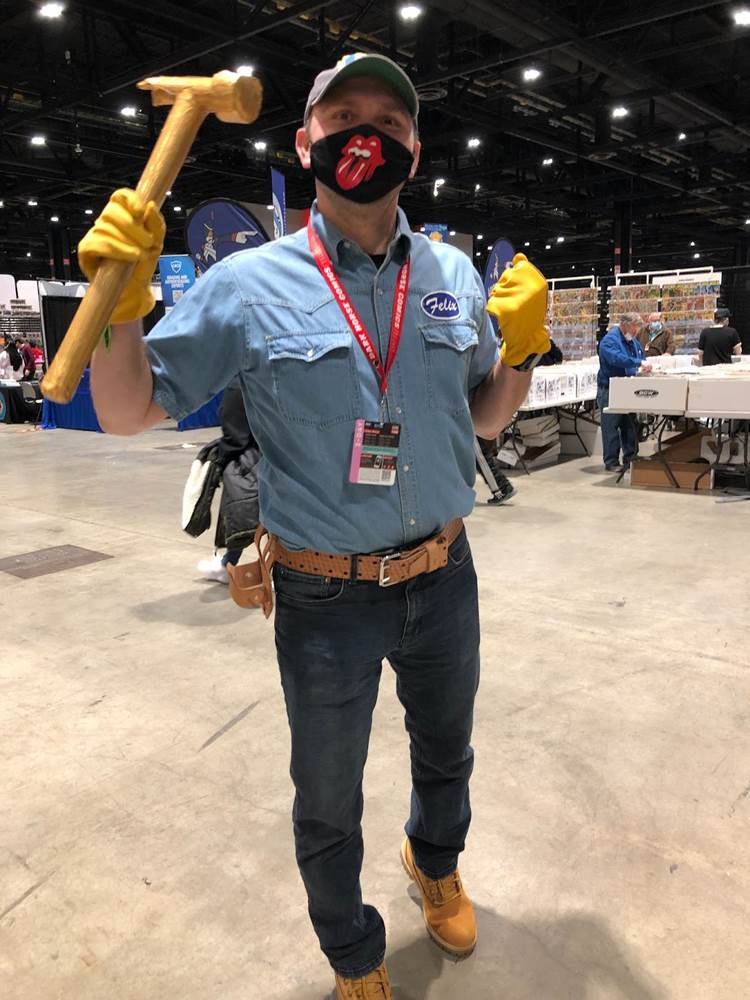 This was the only Eda (The Owl House) costume I spotted during the convention but I was impressed by the authenticity to the look of the character. She even had the Owl Staff featuring Owlbert, and fortunately, he was behaving! 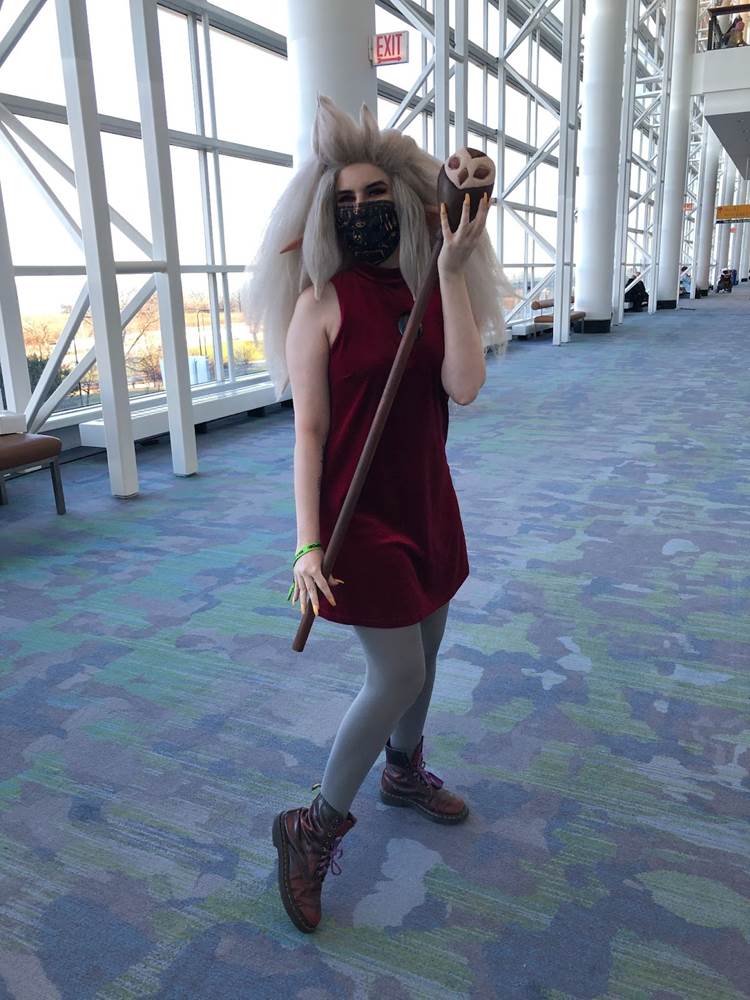 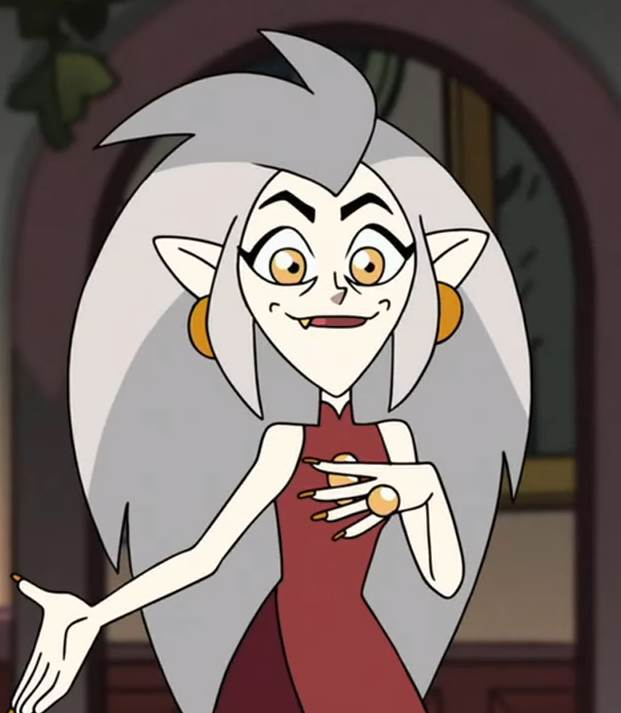 Photo via Fandom.com for The Owl House

With so much incredible Marvel content delivered to fans this year, it’s no surprise that we saw so many costumes. Here we have Peggy Carter holding a photo of Steve Rogers, Doreen Green aka Squirrel Girl and her sidekick Tippy-Toe, and my personal favorite pregnant Wanda Maximoff (WandaVision 1970s look) hanging out with The Winter Soldier. 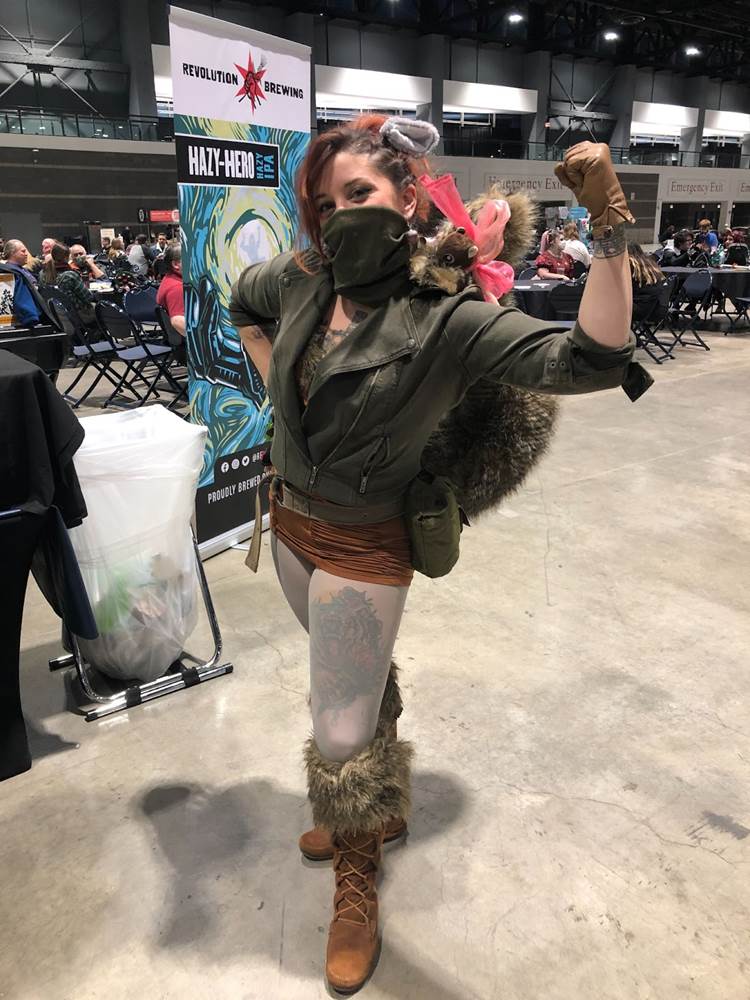 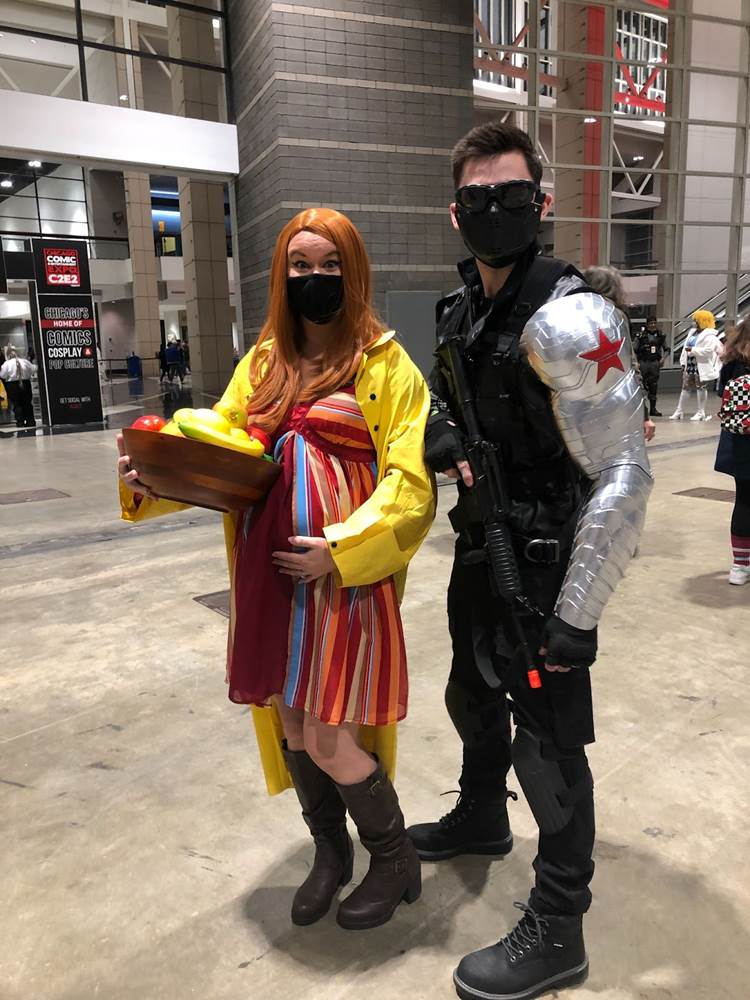 And finally I got in on the fun too with my very inexpensive Gravity Falls looks. I did my best Wendy Corduroy and gave an encore performance as Bill Cipher (seen here with Timothy Zahn and puppet Thrawn) before I had to retire him. 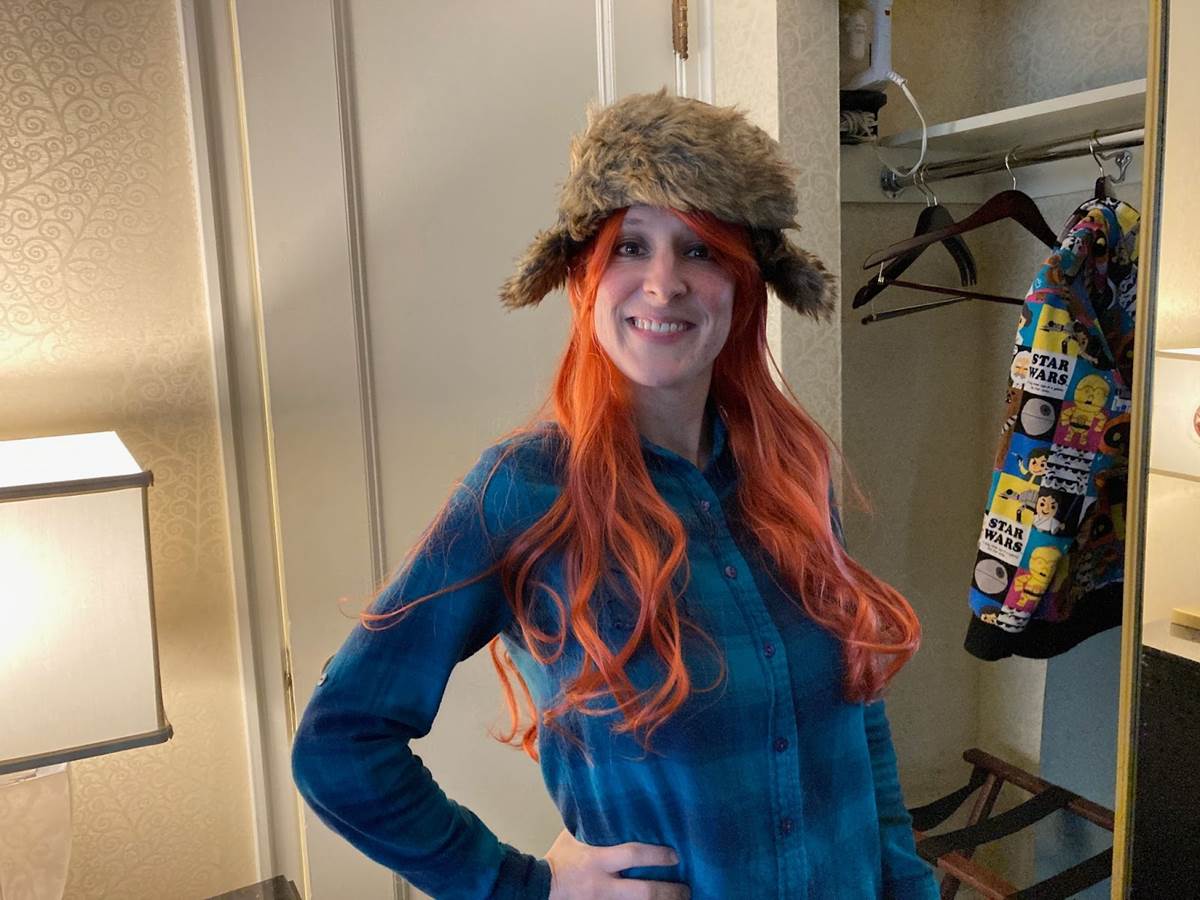 Timothy Zahn, puppet Thrawn, and me as Bill Cipher Bill Cipher costume for runDisney Wine and Dine Half Marathon 2021

We had another great experience at C2E2 and can’t wait for next year! For more about this year’s event, check out Kyle’s report about what was different in 2021 and what stayed the same.