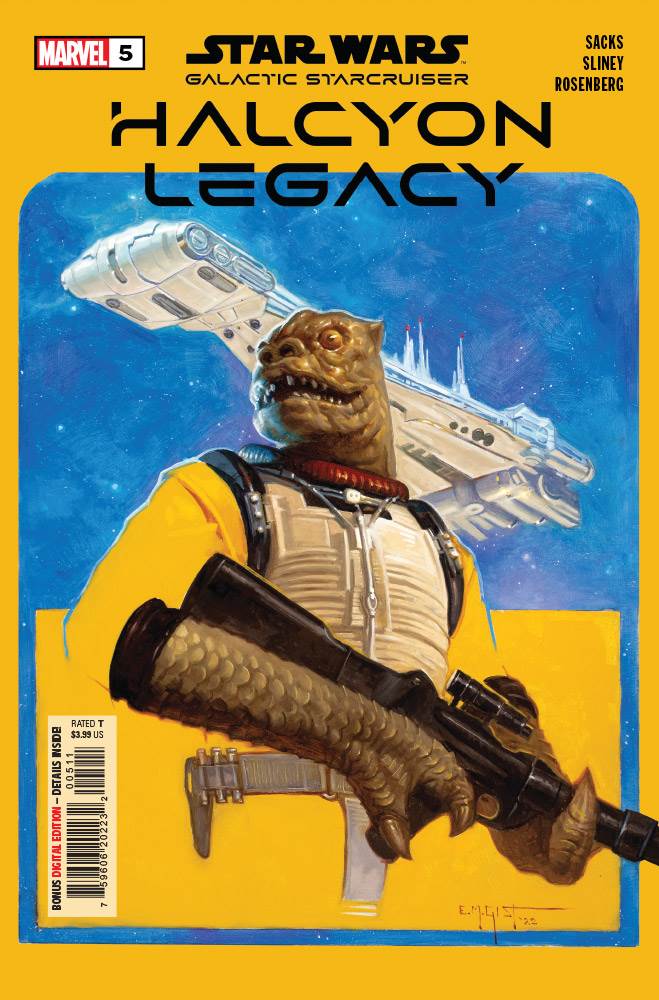 With the release of author Beth Revis’s new novel Star Wars: The Princess and the Scoundrel coming up in a couple weeks, we are reaching the end of Lucasfilm Publishing’s tie-in push in conjunction with the opening of Walt Disney World’s Star Wars: Galactic Starcruiser experience.

Case in point: the fifth and final issue of Star Wars: Galactic Starcruiser – Halcyon Legacy miniseries hit the shelves from Marvel Comics today, and it sees writer Ethan Sacks taking the opportunity to bring in characters from his ongoing title Star Wars: Bounty Hunters like the above-pictured Bossk. 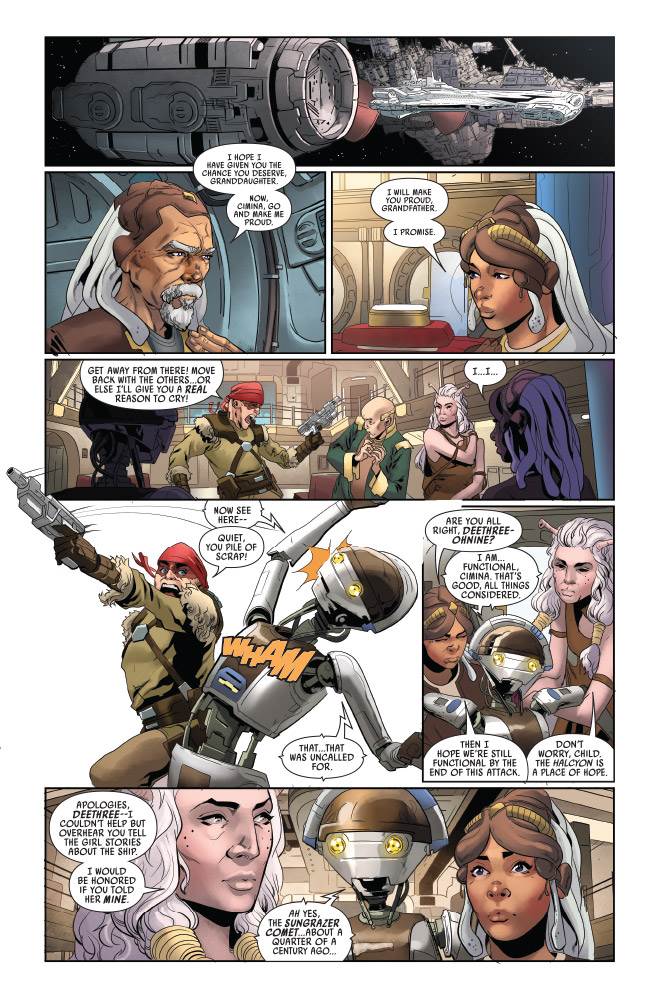 Halcyon Legacy #5 begins in the “present day” (the period set between Episodes VIII and IX in the larger Star Wars timeline) with notorious pirate captain Crimson Jack having boarded the famous Chandrila Star Line ship. He threatens cruise director Lenka Mok and Halcyon captain Riyola Keevan with death for them and their passengers if they don’t turn over the Resistance spy who’s reportedly on board. But Shorr Komrrin has escaped in a launch pod, so Jack takes off after him, leaving his crew to plunder everyone else on the vessel. Meanwhile, D3-O9 continues telling young Cimina (Shorr’s granddaughter) stories about the Halcyon’s past, this time flashing back to the era after the fall of the Empire– and referencing The Princess and the Scoundrel by setting this tale a few years after Han Solo and Princess Leia’s honeymoon aboard the ship. A young couple named Stolak and R’Tess have booked a romantic journey on the Halcyon to see a comet’s collision with a star, but it turns out that Stolak has more going on in his career than the simple transport pilot he pretends to be. It seems he has engaged in some shady dealings in order to afford a more lavish lifestyle with his beloved girlfriend, but that illicit life has caught up to him now that the infamous Bounty Hunters’ Guild has authorized his capture. Soon the bounty hunters Bossk, 4-LOM, Zuckuss, Wooro, T’onga, and Losha (the last three of which were created by Sacks for the Star Wars: Galaxy’s Edge and Star Wars: Bounty Hunters comics) are tracking him down in the Halcyon’s hallways. Their relentless pursuit ends with Stolak having been captured, though the hunters do allow him one final moment watching the breathtaking cosmic collision with R’Tess before they drag him away to his ultimate fate. Back in the present, an older R’Tess helped Lenka and Riyola overpower Crimson Jack’s crew, while the pirate captain himself finds that he’s been swindled by Shorr and his clever granddaughter. This all directly leads into what guests will experience when boarding the Galactic Starcruiser, of course, with the wily First Order Lieutenant Croy vowing to investigate the Halcyon further. We also get a cameo from Galaxy’s Edge character Vi Moradi at the very end (presumably after the events of Delilah S. Dawson’s Black Spire novel), tying things up in a bow for any Star Wars fans looking for further Disney Parks crossovers in their reading. And I think that’s what Ethan Sacks and artist Will Sliney have accomplished with the Star Wars: Galactic Starcruiser – Halcyon Legacy comic miniseries– they’ve successfully expanded the world of the Galactic Starcruiser with more characters and adventures that families can enjoy either before or after their journeys aboard the luxury starliner in real life. These comics are accessible to most ages and can be enjoyed and appreciated by Star Wars aficionados of every level, especially those who have embraced the immersive and interconnected nature of Lucasfilm’s current adventures in a Galaxy Far, Far Away.