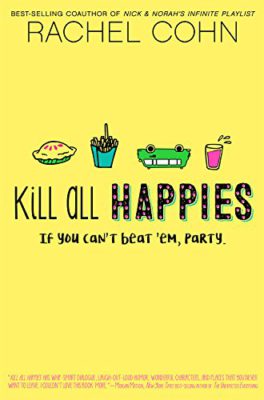 From Hyperion Books, a division of Disney Press, comes this new teen novel by Rachel Cohn, author of Nick & Nora’s Infinite Playlist. Kill All Happies is a story that will take any reader back to their last days of senior year and the confusing feelings that come with going separate ways, that bizarre combination of endings and beginnings. And it’s all set against the backdrop of a wild graduation party at a cultural icon.

Happies is an iconic restaurant in a nothing town along the drive between Los Angeles and Las Vegas. It’s seen better days, with an abandoned theme park attached that hasn’t had visitors in over twenty years and a small group of diehard fans that have kept its legacy alive. It’s as if Knott’s Berry Farm had to close in the late 1980’s, but the Chicken Dinner Restaurant kept going. But after a series of unfortunate calamities, the owner is ready to retire to Florida and sell the land to a real estate developer.

If you can imagine growing up with this dying cultural landmark in your backyard, then you can easily put yourself in Vic Navarro’s shoes. She’s ready to ditch Rancho Soldado to move to San Franciso and her two best friends are heading off on big adventures as well. So when the opportunity to close Happies with an epic graduation party presents itself, she becomes determined to make it the greatest sendoff the class of “Two Thousand and Awesome” could possibly have. And if it comes with a chance of getting close to her forbidden crush (one of her best friend’s brothers), then that’s just icing on the cake.

There’s one major setback to all of Vic’s plans, which takes the form of her high school economics teacher/town councilwoman/former Ms. Happies winner. Miss Ann Thrope not only has it out for Vic, but also for Happies as an institution (she’s even leading the development project on the former land). And if she catches wind of the party that’s going down that night, the rest of Vic’s life could easily be ruined.

The story cleverly begins with the party coming to a screeching halt and all of Vic’s friendships unraveling, then backtracks to graduation day, welcoming you into her world so you grow to love all of her friends just as much as she does (and despise Miss Ann Thrope with a venomous passion). For Disney Parks fans, it’s also fun to see a devoted group of Happies enthusiasts, who meet regularly for conventions and follow Happies fansites, who end up crashing the final party at Happies. It’s hard to not notice the parallels between the Happies crowd and Disney fans.

I enjoyed Kill All Happies far more than I thought I would. I can easily see it being adapted as a Freeform TV movie, but I will caution that the book is aimed at high schoolers and would come with a PG-13/R rating if the MPAA were reviewing all of its contents. It offers a bittersweet story against a fun abandoned theme park backdrop with great characters and it’s hard not to fall into Cohn’s storytelling magic.