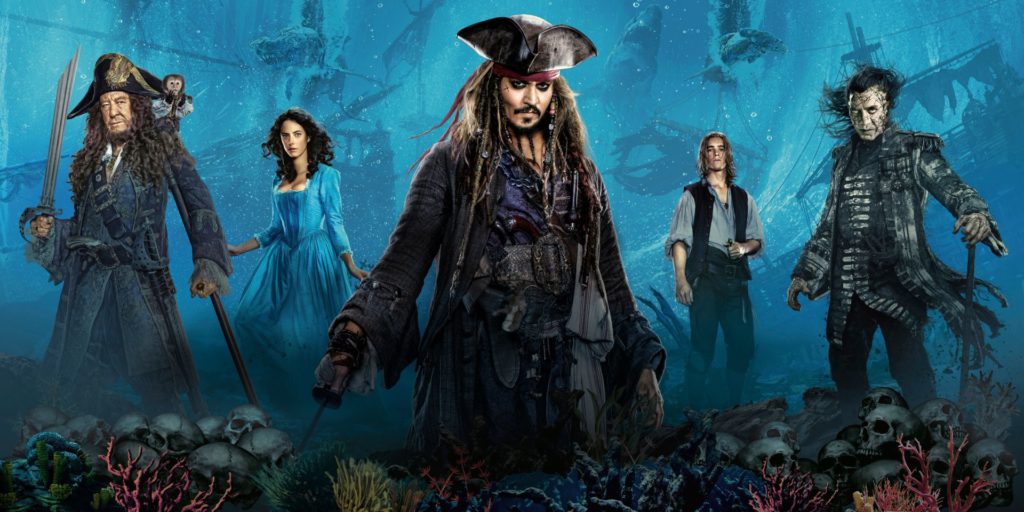 Captain Jack Sparrow and crew return for the fifth, and possibly last, film in the popular Pirates movie franchise, Pirates of the Caribbean: Dead Men Tell No Tales.

It has been six years since we sailed with “the wildest crew ever to sack the Spanish main” and this film marks a return to the POTC basics: well-formed characters, enormous sets, clearcut goals and legendary tales.

Like many of you, I am a huge fan of the original Pirates of the Caribbean film (as well as the Disney attraction it is based on – which just celebrated its 50th anniversary). To that extent, I had high expectations for this one. While it didn’t meet every expectation, this film certainly satisfied most of them and unexpectedly exceeded others that I didn’t know I had.

Johnny Depp suits up once more as the bumbling Captain Jack Sparrow. He is joined by returning cast mates Geoferry Rush, as self-serving Captain Hector Barbossa and Kevin McNally, as the faithful Joshamee Gibbs. (A little trivia for you: These are the only actors that have appeared in all five films.) They’re joined by a younger generation of talent in the form of Brenton Thwaites (Maleficent) and Kaya Scodelario (The Maze Runner), who bring new life to the franchise.

The same could be said about the co-directors, Joachim Rønning and Espen Sandberg (Kon Tiki). They may be covering the same ground as previous directors – ship battles, ghosts and sea myths – but they definitely know how to make the material shine.

Other returning cast members – like Orlando Bloom and Martin Klebba – are also a pleasant surprise. But it’s Paul McCartney’s almost completely ad-libbed appearance that steals the show. Well, his and one other (don’t worry, this review is spoiler-free).

Pirates of the Caribbean: Dead Men Tell No Tales also features nods to the original Disney attraction at Disneyland as well as tiebacks to past films that fans will go crazy for. And it feels like a theme park ride.

The movie starts out with a massive sequence that required the production team build an entire town. There’s also the guillotine scene (on this same set), that is arguably one of the best edge-of-your-seat action sequences in the entire series.

The POTC film franchise is known for grand set pieces. They’re the backdrop that Johnny Depp’s Captain Jack stumbles, falls, jumps and tumbles in and out of – and you are there too – hopping rooftop to rooftop, sailing from one location to another as we follow Jack on his quest. If this film does one thing right, it’s in how it re-immerses moviegoer’s in the Pirates universe. 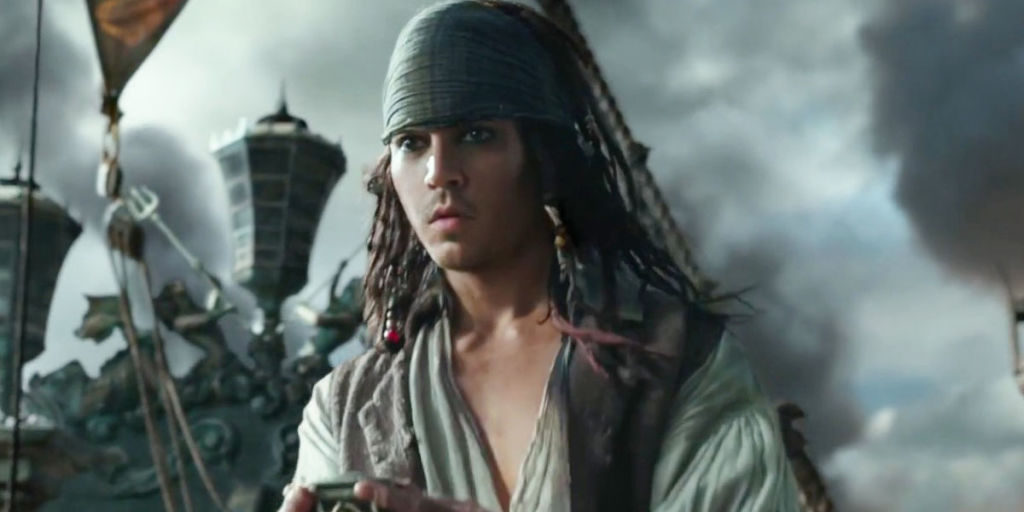 A CGI Jack Sparrow joins a younger generation of real actors (Brenton Thwaites and Kaya Scodelario) in what might be the last Pirates adventure.
(Image©Disney Enterprises, Inc. All Rights Reserved.)

This time, Jack’s in search of the Trident of Poseidon and to find it he’s going to need help. That help comes in the form of Will Turner’s son (Brenton Thwaites). He wants to free his father from the curse placed on him in Pirates of the Caribbean: At World’s End (2007).

Fans will note, Will can only walk on land every 10 years – and it’s been exactly ten years since Turner was cursed to helm the Flying Dutchman. Jack is also joined by Carina Smyth (Kaya Scodelario), a young lass whose own agenda will play a significant role in the adventure.

Jack is still the same old Jack, but Captain Sparrow is growing tired of the “pirates life.” The audience might feel the character is a bit past its prime, too. After all, how many other ways can we watch Jack fall down, haphazardly fight off the British and other villains? Well, apparently a few more, as the guillotine scene more than illustrates.

Yes. It is Jack Sparrow’s film but it’s kept afloat by Geoffrey Rush and Javier Bardem. Rush returns as the pirate Hector Barbossa. Who, it seems, would keelhaul his own family to get what he wants. Barbossa’s probably the most “pirate” of all the pirates onscreen. His mood, actions and words are torn right from the period.

Bardem plays Captain Salazar, a Spanish captain bent on revenge – and Sparrow is his target. Bardem plays the role with the same creepiness he’s brought to other villainous roles like in No Country For Old Men and Skyfall. Bardem’s Salazar is a rage-filled ghost who will stop at nothing to find Jack and exact his revenge. Some may argue Bill Nighy made a better villain (his turn as Davy Jones was great), but there’s a real evil in the way Bardem plays this character that doesn’t at all feel comic-booky. When he starts killing pirates, it’s scary.

Something fans won’t argue about are how great the special effects are. Including the ghost effect of Salazar and his crew, some of the best effects of any of the Pirates films. In the fact, the ghost effect is not only creepily beautiful to watch on screen, at times, it’s mesmerizing. The end sequence is also beautiful – and literally, breathtaking.

Aside from the beach scene where he confronts Johnny’s Depp’s Captain Jack, Javier Bardem never spent a second on the sea, all of his scenes were filmed on set. Remember that when you’re watching him bark orders from the deck of his ship.

Is Pirates 5 Worth Seeing in 3D?

I saw this film in Disney Digital 3D and was to the extreme left side of the screen and theatre. I worried that, 30 minutes into it, my head would be throbbing. But I had absolutely no issues: This is possibly the best 3D of any Disney film to date. And it’s fun to watch cannonballs and ghostly sharks fly in front of your face. Yes, if you can, go see it in 3D.

Pirates of the Caribbean: Dead Men Tell No Tales doesn’t suffer like other Pirates films have from trying to do too much. It’s reasonably lean (Running Time: 2 hours, 33 minutes) and feels like the quickest moving Pirates film in the series.

If you’re a fan of the franchise and characters you will thoroughly enjoy this film. It fits perfectly into the series – and does a wonderful job of tying up the loose ends and delivering on the promise of adventure. From the young Jack Sparrow sequence (that will become Disney mythos) to Salazar and his ghostly crew – it’s a fun and fantastic Pirates adventure.

Pirates of the Caribbean: Dead Men Tell No Tales opens May 26th.